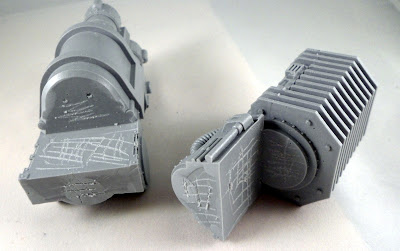 Hello Titan Enginseers and Readers, Thanks for dropping in. With the Titan Superstructure mainly completed I turned my attention to the Secondary Weapons as I am awaiting the release of more FW Arm Weapons before committing to Arm-ament... sry ;)

I scored the Carapace Reaver Laser Blasters where the glue would go to provide a better surface area for bonding and then applied the JB Plastic Weld. 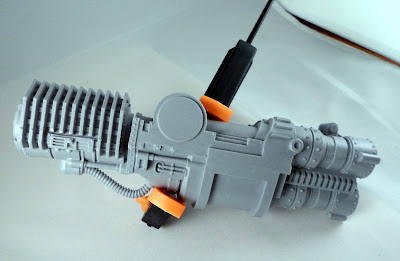 I clamped the two pieces together whilst the epoxy set, and left overnight. Not forgetting to glue the Barrel Support to one of the barrels as per the instructions. 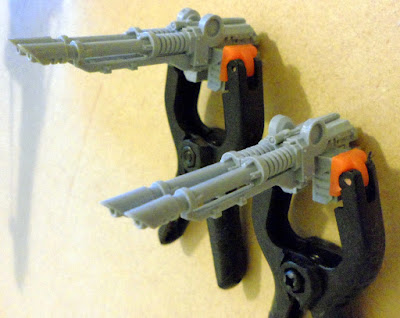 Whilst the main 'Secondary' weapons were drying, I assembled the Mauler Boltcannons and TL Lascannons - yes the Titan has the armament of a Landraider as secondary weapons ;)  These could then be left separate from the titan for ease of painting later. The guns were slotted into the mounts but the base plate of the mount left separate so they can be affixed to the Titan Weapon Mounts after painting.

The Main body of the Laser Blasters sits in the Weapon Mount, and the Piston Assembly out of the box sits nicely in place without the need for clamps or trimming, so I glued these parts together in one sitting (no photo) and left to dry, gravity doing the hard work. The pistons which held the barrels in position were then glued in place later - I was going to leave off for painting but had some spare wet epoxy at some stage, so went ahead and glued after the barrels were in place. Below you can see the Weapon Mounts in place and no pistons. 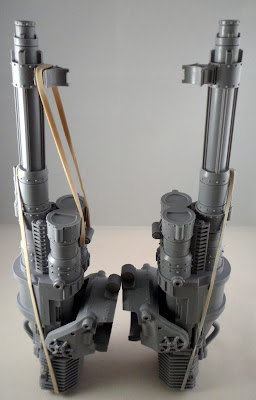 Once the main body and Mounts of the Laser Blasters were dry, I set about gluing the Barrels, using the single Barrel with the Barrel Support attached and some elastic bands, the Barrel slots into place nicely and didn't require fiddly pinning, the JB Weld is far stronger than required and no weight will be pushing down on the barrels, plus once all three are in place, they support each other. This was left to dry overnight. 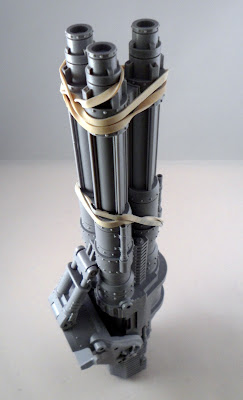 The other two Barrels slot into place and use the Barrel Support as a guide, a simple rig of elastic bands held them in place until the next day. Here you can see the pistons in place also, using some left over epoxy from the barrels. There are two ways you can fit the pistons, both 180 degrees from each other, one way is incorrect, be careful and dry fit the curved piston ends into the lugs on the Mount and Barrel Assembly and see which fits flush better. 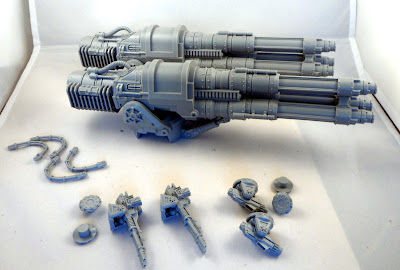 And here are the Secondary Weapons (and maybe Tertiary Weapons) for  the Warlord. I have left off the power cables for ease of painting later. Lastly, I inserted magnets into the Shoulder Mounts and the base of the Weapons so they fit firmly in the mount but can still be removed and swapped or trained onto the enemies of the God-Emperor... 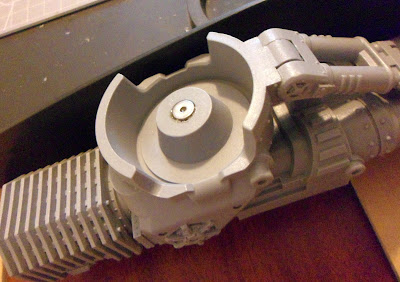 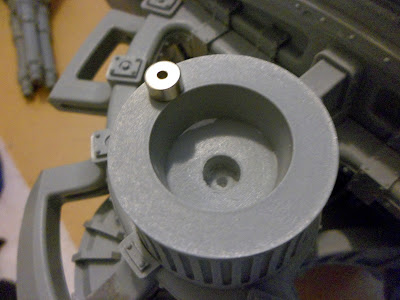 These are 7mm x 4mm with a countersunk 2mm hole for extra surface area to glue. Not enough to hold the weapon on if tipped upside down, but enough to stop the weapon tilting on the mount.

Thanks for dropping in. Not much basic construction left... The main arms when bought will be a similar method, and I will post how I mount them into the Titan arms in due course!