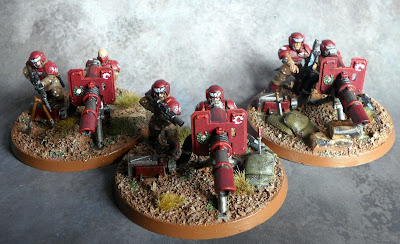 Hi All, thanks for dropping by. I recently saw some Astra Militarum, Imperial Guard on eBay which would fit in nicely with my Cult. I repainted them all except the fatigues which had a nice cookie camouflage in the same colours as my Kommando Khaki fatigues.

I thought some Lascannons would give my growing Cult some needed punch and anti-tank, and also a useful backfield camping squad. I love the idea of Brood Brothers being twisted brainwashed unfortunate Guardsmen now fighting for the Four Armed Emperor... 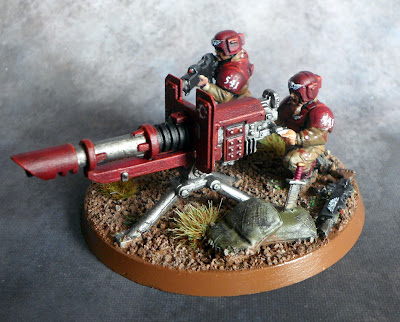 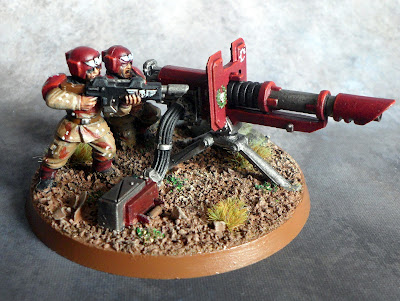 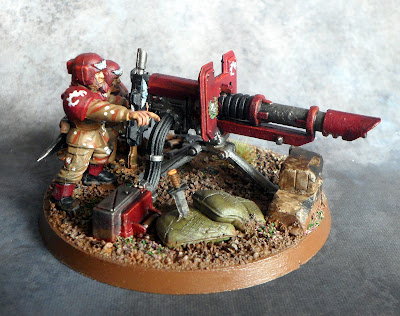 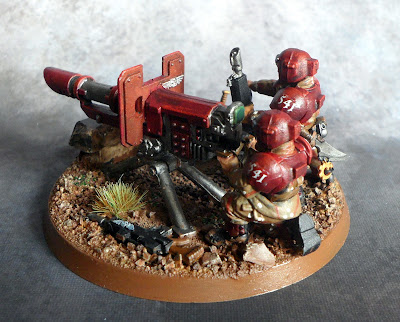 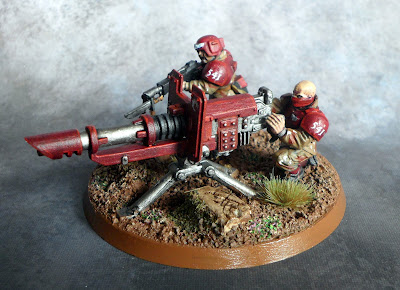 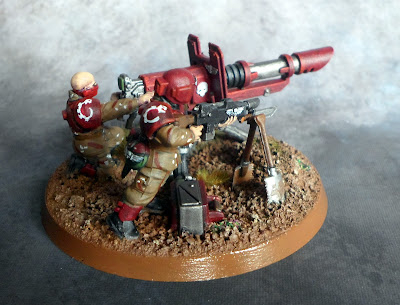 Team 3 - fixed bayonets when a Lascannon just doesn't cut it... 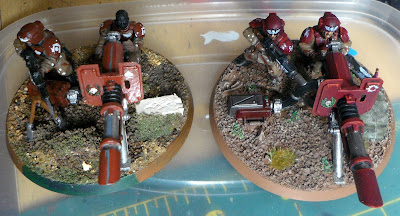 And here you can see the eBay auction result and my repainting side-by-side. A lovely addition to the growing insurgency Cult.
Cheers, Siph (6pts)
Posted by Siph_Horridus 1 comment:

Hello one and all! A few weeks of absence hopefully makes the heart grow fonder? maybe. I've been busy with a combination of work/stuff and also projects! Inlcuding this one that is now 'finished'. 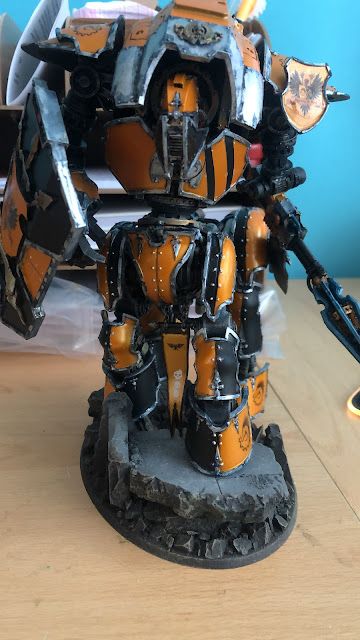 This is a Knight Centaur Lancer, utilising several kits to produce these results. The Lancer is of course, the Forge World model, with the lower portion a 3D kit bought from a well known auction site. I believe it is by 'themakerscult' and to confirm, is one beautiful, glorious kit. The lancer shield is from Taro Model Maker, and the base was from a seller on Ebay. 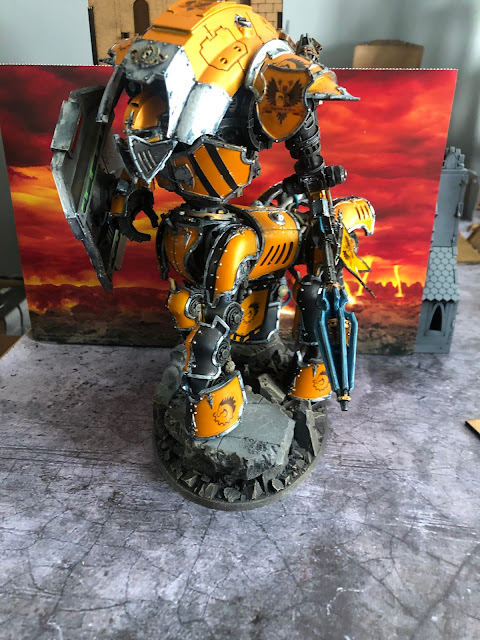 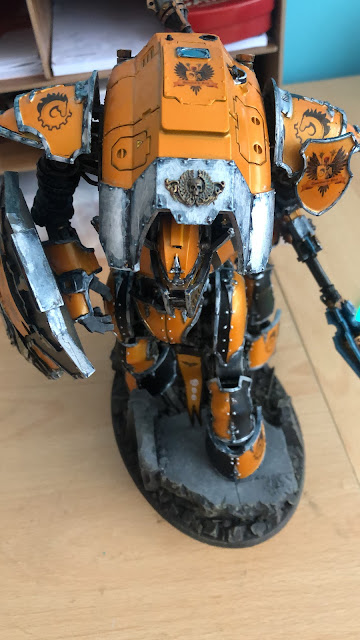 The knight is from the house 'Dominus de Ryza' latin, for Lords of Ryza, the knights are a supporting house for my Crucius Titans. 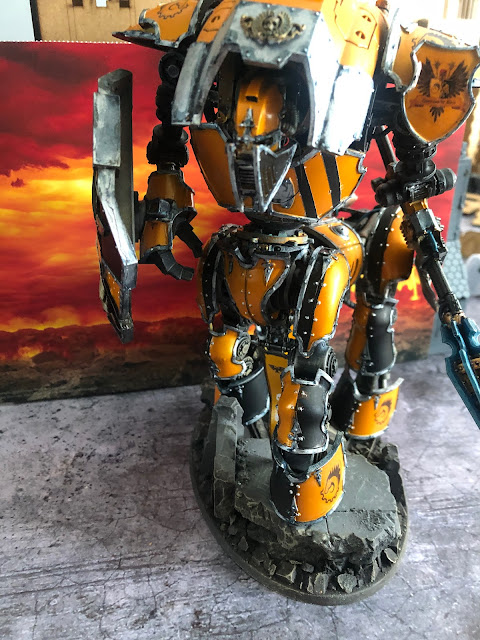 The kit was great to put together, you need a lot of patience to get the legs correct, (dry fit/try/try/test) as they the legs have several parts and need to line up correctly for the model to stand, I built the model with all the panels removed so that I could paint it in subsections - the armour, the weapons, the endoskeleton, shield. 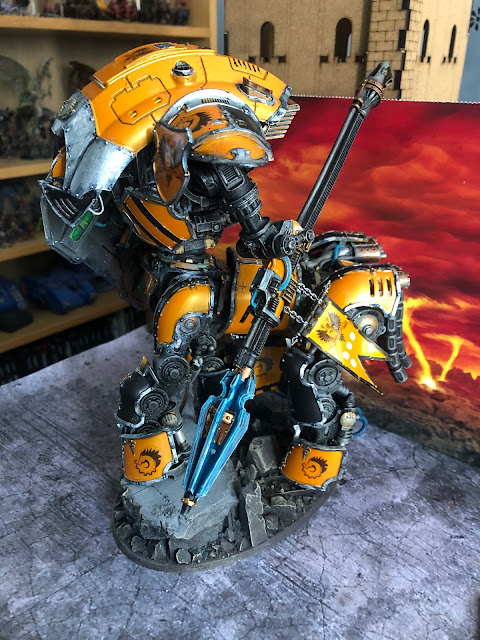 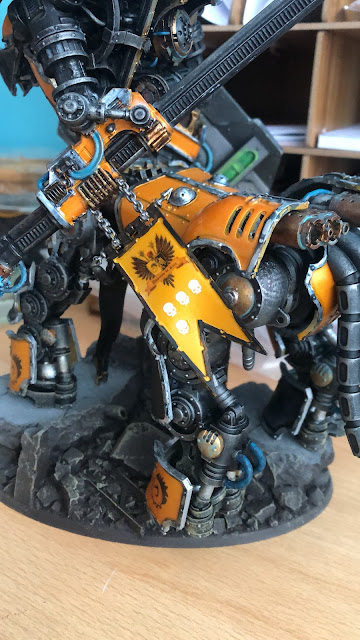 The knight endoskeleton was painted black, then highlighted up with silver and greys. The armour was initially undercoated white, then I applied XV-88 to add depth. The armour was then sprayed with 5/6 coats of an Orange pearlescent colour. this was allowed to dry prior to each new coat. I then taped the model to then spray a matt black on to the armour panels to add contrast. 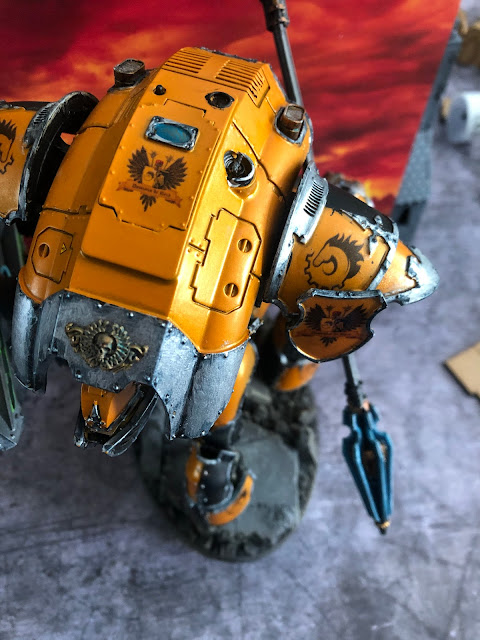 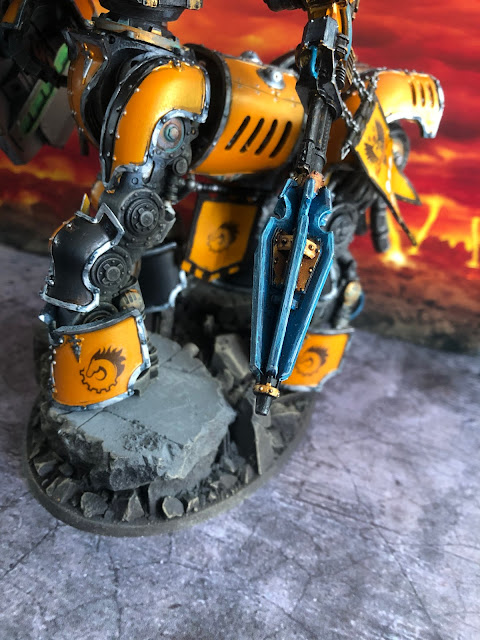 The spear was picked out with blue hues, to again add contrast to the orange/black I've also used blue as a spot colour for the wires across the model. Verdigris has been applied to all 'copper/bronze' areas to add a sense of age to the knight. The model had had LED's installed into the head, I am just waiting on a battery pack to then be able to get them lit- these are 2mm Orange LEDS. 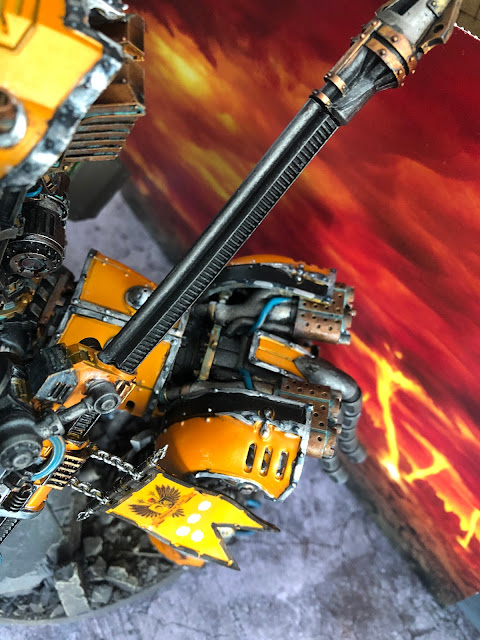 I've also applied home made decals to the Knight, I used photoshop to create the heraldic symbol, utilising an image I found on google for the house symbol - a horse head with a partial cog around it. 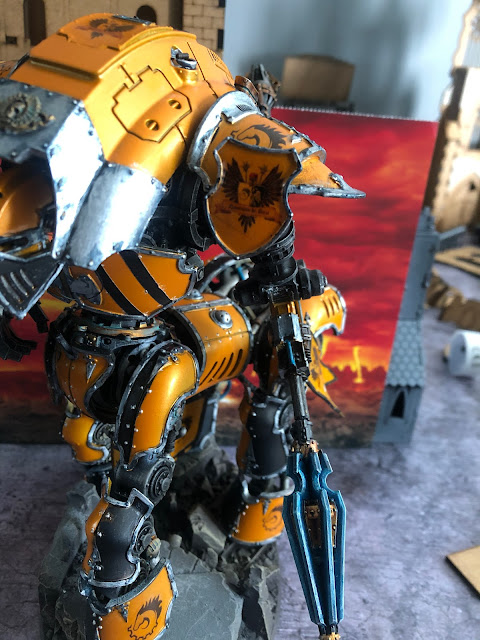 I need to add the knight name to the shield banner, but this will be done once the other Knights are added to the house.

Thanks for stopping by! LH (20pts)
Posted by Lord TITANium Halfpenny 3 comments: 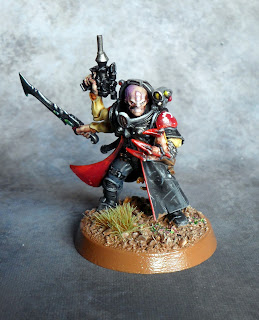 Hello All, thanks for dropping by. Another Genestealer Cult addition, an HQ as I am yet to start with all the plethora of Characters that the Cult provides. 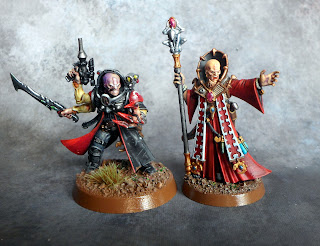 He is a nice addition, leaving the Magus to concentrate on frying minds! The inner lining to the leather jacket is red to fit in with the red and cream scheme of Hivefleet Kraken. 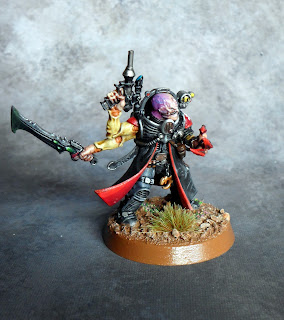 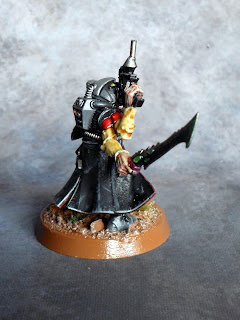 His Needle Pistol barrel snapped off so I replaced with some paperclip. 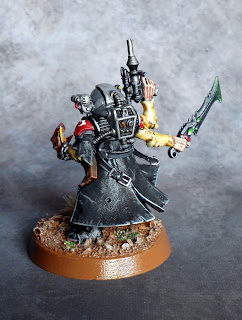 I've linked a few schemes from the Brood Brothers (Shoulder Armour) and the Genestealers (Chitin, Claws and alien flesh) so he fits right in the army.