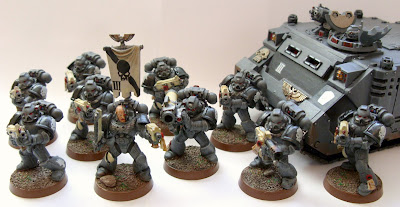 Tactical Squad IV and Rhino Transport
This continues the fleshing out of my Relictors Army, with two more Troops choices. I am currently working on squads V and VI. These newest additions make the army a viable force now with a flexible weapon load albeit Frag or Krak missiles but, squads II, III and IV are all basic points cost, free Flamer and Missile launcher being full 10 man squads as well as each having a Sergeant with Bolt Pistol and Chainsword. So, for next to nothing points, suddenly the enemy has 6 combat squads, all objective taking troop choices, to deal with. Plus, for a few extra points I have Rhinos to provide either Speed, Armour, Smoke or Cover. 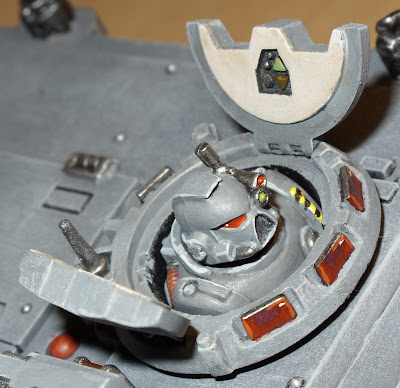 Check out Squad III's driver, he's feeling a little left out of the action. Tread-head! Also a close up of the armoured glass periscopes, simple but effective paint work.
Anyway, enjoy, I hope you get some ideas from these. Back to painting - I am so slow! If I averaged out the finished Marines with the date I started, I think I average 1 Marine a week with a Rhino every 2 months... full time employment sucks but is a necessary evil to supply beer and weemen tokens to spend.
Posted by Siph_Horridus 9 comments:

I have been collecting my Ultramarine army for some time now, (almost 12yrs!) however it is only over the past few years that I've really got back into the swing of things and started some serious modeling.

I have already got a large force constructed over the 12yrs, having the majority of the 2nd Company complete as well as having some of the veteran company and 3rd. This all had painted in what I would like to term 'old school' Ultramarine colours. Following the sole use of ultramarine blue for the armour, using yellow for the trim of the 2nd Company. I have also used the old helmet colours for veteran status (red helmet with a single white stripe) I have updated the weapons to be black, instead of red as I believe the black bolter adds more definition to the models and ties in nicely.

The army also has a very large armoury, having 3 Vindicators (1 scratch built, 1 Forgeworld and the last being the Mk1 Rhino variation) 6 Predators (1 Mk 1 variation (large round turret) 2 Mk 2 variants and 3 of the new versions) 2 Whirlwinds and 4 Razorbacks. (including one of the rare Mk 1 variants with the fabled lascannon/plasma weapons) and 5 Dreadnoughts. There is also 2 Landraiders.

I feel quite lucky to also include a Thunderhawk gunship and an armorcast Reaver titan.

As you can see there is quite a sizable force, however sat in my 'to-do pile' are 3 more Dreadnoughts, around 2 Battle Companies and several veteran squads including the new Vanguard/Sternguards. I am currently working on finishing a Fellblade for my Ultramarine's. (I just love the Baneblade tank so much!) I have also got two more Landraiders sat on my table.

So why Ultramarine's?? - I know every time I go into games workshop they ask 'which army do you collect?' all excited and when I tell them 'Ultramarines' its like I've said something bad... The main reason was I really like the history of the Ultramarine's, I read an article in WD, relating to the battle of Macragge - with the Tyranid invasion, I really like the idea of these guys standing their ground and battling to their deaths and stopping the invasion on their home world. The first edition of WD that I read was about 187, where the original Chief Librarian Tigurius was released, I loved this model - the pose looks amazing even now, there was just something about the way it looks, like a marine with power. The battle report also was one of the major facts for me starting, it was at the time one of the largest tank battles ever with marines against a rogue pysker who had control over a large number of Leman Russ battle tanks.

I will hope to update pictures on the blog soon of my 'boyz in blue' as well as to show my work in progress. I also plan to show you my hobby, my area of work and potentially future battle reports fought with my Ultramarines and Siph's Relictors!
Posted by Lord TITANium Halfpenny 5 comments:

Tactical Squad I and Rhino transport

Its about time I started fleshing out my Relictors army with some of the objective taking and game winning Troops choices. The humble tactical squads form the backbone of the Chapters strength on the battlefield and are often at the forefront of operations, flexible enough to either be a gunline shooting from afar, tankbusters with krak missles and the odd powerfist toting sergeant, or in the thick of it holding their own in close combat. These are the troops I never leave home without... maybe not all my squads though, since I'm building an entire Company I'll have six of these bad boys.

Squad 1 contains my first ever painted miniatures, the bolter brother behind and to the left of the Sergeant was the first and a paint scheme concept check, then the Sergeant and then the Heavy Bolter brother. Squad 2 came later and much quicker.

Squad 1 also were painted without a Badab Black wash so have a cleaner appearance. I wasn't aware of washes early last year. Troops should be simple enough to paint as you will have lots of them, saying that, I still embelished details and highlights on all miniatures. The backpacks have metal and indicator lights in blue and red behind the head, this is mirrored on the rear waist of terminator armour. Knee pads indicate Tactical Squads, Rangefinders above the barrels on weapons have a red lens, rivets on backpack are metal as are vents and grilles. Purity seals have text and eyes have a single dot of skull white highlight. Using simple neat details you really enhance an otherwise standard paintjob. 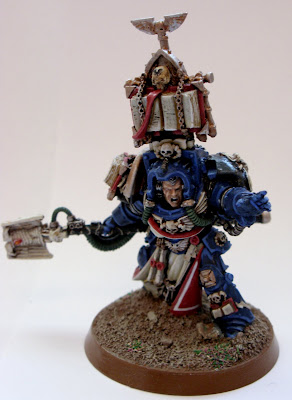 This is my Relictors Librarian. As you can see I've chosen Terminator Armour for a little survivability on the battlefield. The paint job is not all my work, an ebay purchase and finished by me (bloomin good value too!) but I thought I'd share a piccy with you for ideas etc. I've used the codex colour blue armour and Chapter shoulder pads.

The Relictors Chapter have numerous Librarians and they take on the role as Chapter Senior Command, documenting the Relics they find and are at the forefront of research into the Chaos Artefacts they use to fight Chaos with. My plan is to paint up some more in Power Armour from some great miniatures I've purchased back in the 90's. I'll still have a Chapter Master and some Captains though...
Currently working on completing my Tactical Squads to go with their Rhino transports (previously posted) so I'll post soon with pictures of them. 3 down, 3 to go. One squad with FW Red Scorpion MK4 heads and chestplates and one squad from AOBR minus the naff sergeant (although his legs have been salvaged for the MK4 squad and his pointy arm, backpack and sword hilt have been saved for future conversions too!).
Posted by Siph_Horridus No comments: