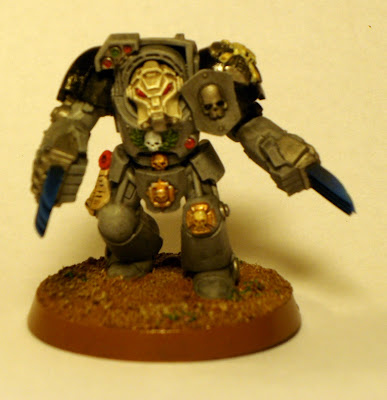 Just a quick update on the progress of the Terminator Assault Squad with Lightning Claws, got 6 more Lightning Claw arms and two bases to finish then all done. More shots when complete...

And just a thank-you for the Gross followers, that is mathematical Gross - 144 followers, thanks, hope you enjoy our stuff.
Siph, Pornstarjedi and 6th Degree
Posted by Siph_Horridus 1 comment: 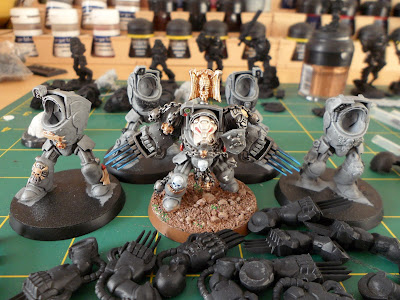 Hopefully some real progress and finished shots later this week.
Posted by Siph_Horridus No comments: 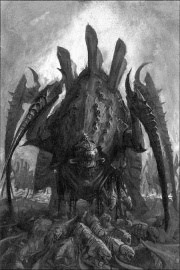 Hi all, I’m back with another update from Hive Fleet Thorn and today I would like to introduce you to our newest member – my Tervigon!

The Tervigon is one of the new ‘Nid units to me and was introduced during my break from 40K. And it’s a great addition – if you aren’t aware; the Tervigon is a monstrous creature that can be used as a ‘Nid HQ or Troop choice and is the ultimate support unit. It has synapse, a ton of high Toughness wounds and some very useful psychic powers (it can grant Feel No Pain to a unit/allow a unit to run and shoot in the same turn amongst others). Oh, and did I mention that it also poops out 3D6 Termagants per turn (its stops after a double is rolled).

It is such a useful unit that you will be hard pushed to find a ‘Nid list that doesn’t field at least one of these big mommas. It is surprising then, that GW or FW doesn’t sell a Tervigon model (it would surely make a lot more sense to produce one instead of some of the other units available….I’m looking at you Pyrovore).

However this provides the perfect opportunity to make one yourself! This is the Tervigon I managed to knock together: 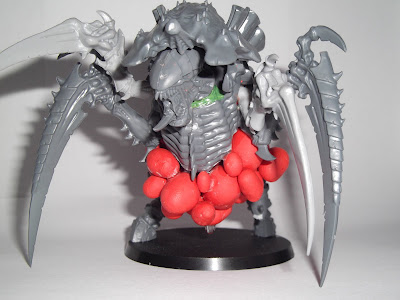 Like many Tervigon builds you can find on the net – this one is based on the Carnifex boxed set. I really wanted to give it a size boost over the Carnifex though and make it look like it is capable of birthing dozens of Termagants; so very briefly, this is how it was made:

At this point as I was holding the model vertically, I realised all the detail of the eggs and head were completely lost when it was stood horizontally, and that in a vertical position it appeared much more dynamic…so I quickly removed the rear legs and replaced them with standard Carnifex legs, angled so it appears that the Tervigon is rearing up (I really prefer this pose, although if I make another one I will have it walking as I originally intended but aim to make it more dynamic whilst modelling it).

The model was finished by adding a second set of smaller scything talons that appear to be striking out.

I’m very happy with the model and can’t wait to paint it. It looks like an absolute monster in comparison to other models and I think its going to make a great addition to the Hive. 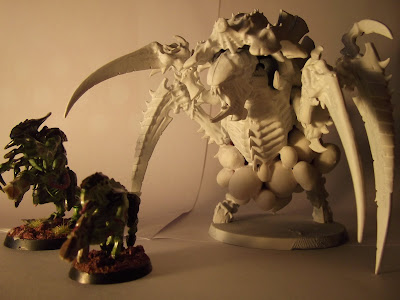 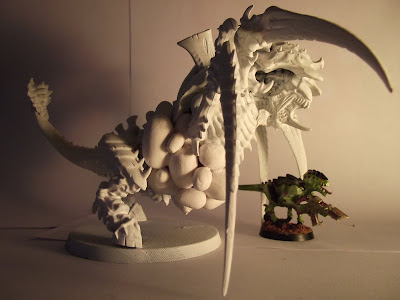 Hi All!!
I just wanted to get a discussion going about terminators and drop pods. I recently put the question forward to Siph about termi's in drop pods following seeing a picture of some dark angel termi's coming out of a drop pod.

We discussed the pro's and con's- we both believe termi's shouldn't be allowed (apart from characters attached to a squad with a dedicated drop pod) However if you read the rules, it doesn't state terminators cannot be transport, like with the case with rhino's and razorbacks. 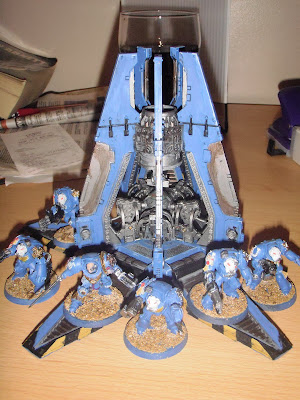 I've had a read of several codices, and imperial armour and have found that the dark angels codex states that terminators can be transported- as does the Apocalypse II imperial armour book.

The GW line is that terminators can be transported via drop pod, that the DP is purchased by a tactical, but that the terminators use it instead (if I'm a tactical marine, I'd offer my spot in a dp if a termi asked!)

This does seem slightly odd- I can see the point of DP'ing terminators as you are guaranteed not to lose them due to a deep strike mishap- at 200+points you really don't won't to lose time- it also means that you can drop pod assault them in on turn one. however in the spirit of the game would you say it was fair?

Hi all, quick update- the mission of 'how many marines can I paint in one day resulted in 10 marines complete, apart from transfers. Once I've got these on, I'll post pictures...
Posted by Lord TITANium Halfpenny 3 comments:

Update number 2- as you can see the tactical squad is coming along nicely, weapons and arms have been added to the marines, as well as the shoulder pads.
I've also started updating a 5 man devastator squad. 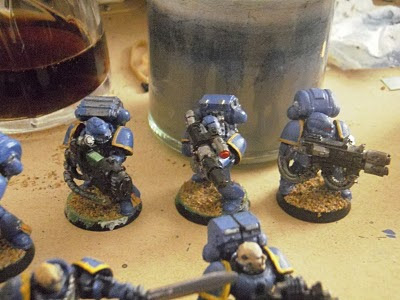 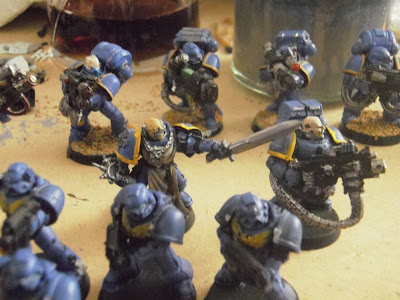 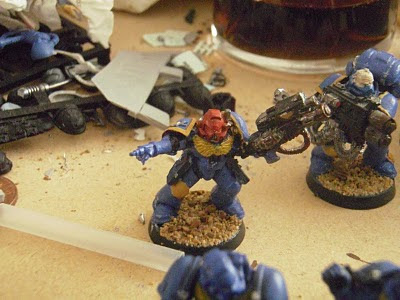 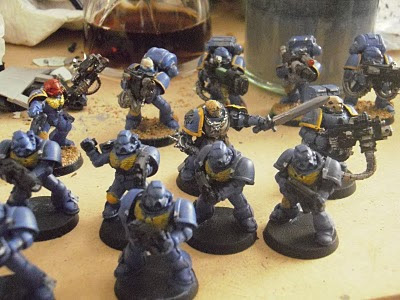 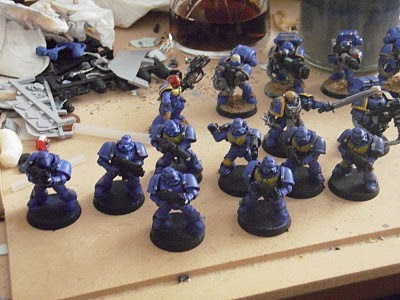 Just a quick update about how I'm doing! the initial task was to see how many marines I can paint in a day. As you can see from the pictures, I'm slowly making progress. Hopefully I'll have half of this squad finished by the next post! 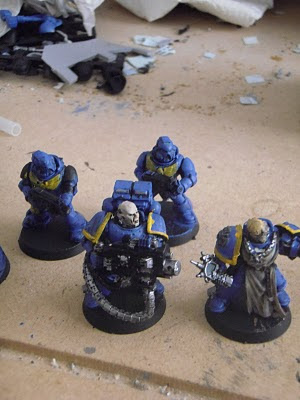 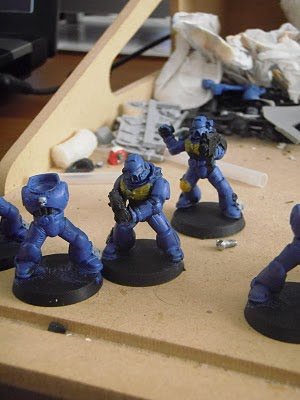 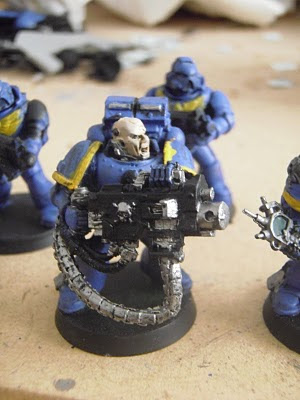 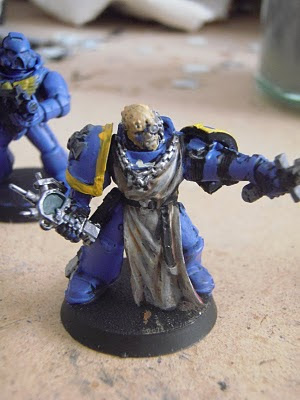 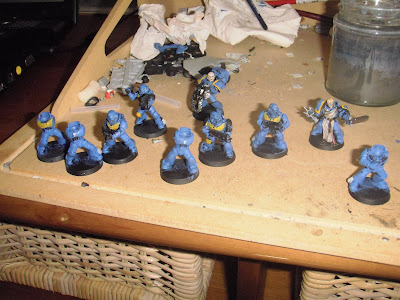