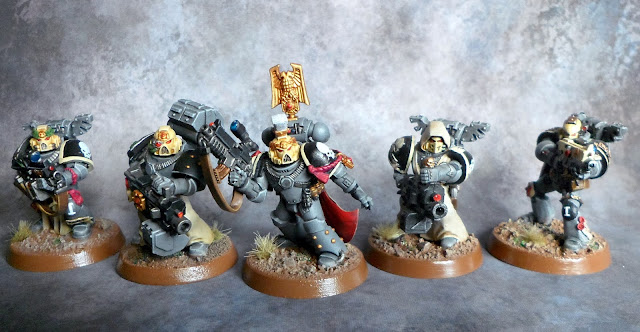 Hello All, thanks for dropping by, not only have I been busy with Titans of various sizes, I always come back to my first love, my ever expanding Relictors Chapter Battle Company. Long overdue are some Sternguard Veterans.

These are made from a variety of kits including the Sternguard Boxset, Horus Heresy plastics, old metal Sternguard set and some Dark Angel Veterans. The skeleton adorned back packs was a set of back packs from the old Cypher and Fabius Bile metal miniatures released as a blister pack of 10 for a short time to get rid of stock I guess. I have used them across several Veteran Squads. 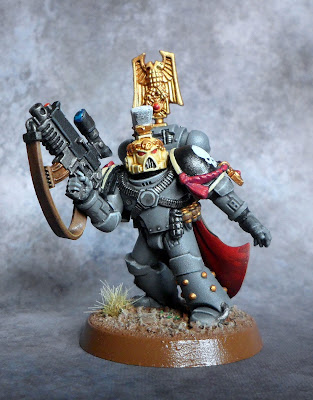 The Sternguard Sergeant is based on a Betrayal at Calth marine with a Sternguard cloaked rear torso and head. I rather like his pose, swishing back the cloak. 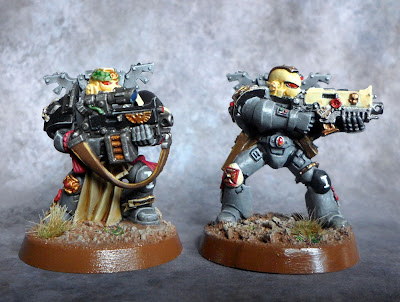 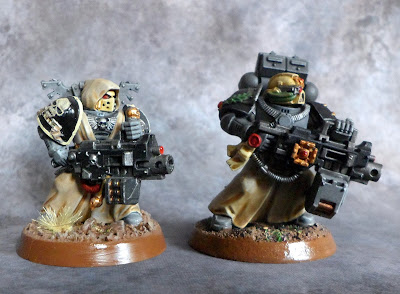 The two Heavy Weapon Sternguard are based on Dark Angel Veterans (left) with Scout Heavy Bolter and modern plastics Sternguard HB (right). The ammo back pack also gives him a lot more height. 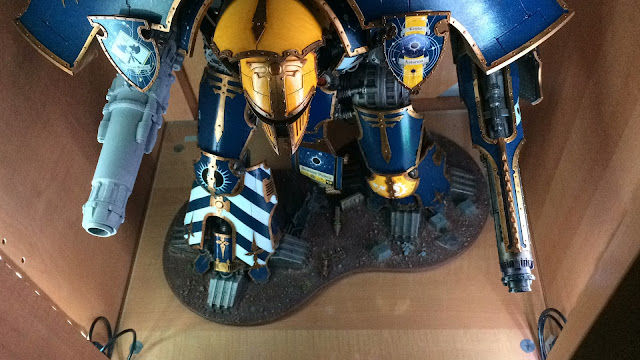 Hello Titanseers, thanks for dropping by, a quick post on the progress I made on my additional Titan armaments, the Mori-Quake Cannon is the main armament of the Warbringer Nemesis Titan and Forge World have also made it for the main arm weapons of the mighty Warlord Titan. 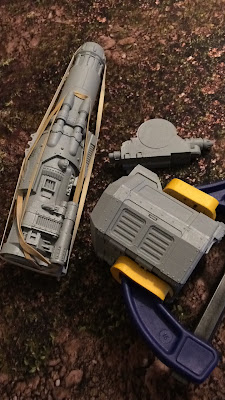 Construction is easy enough and a large 8mm diameter by 30mm rod magnet in the arm coupling provides ample pull to stay firmly in place hanging from the Warlord elbow. 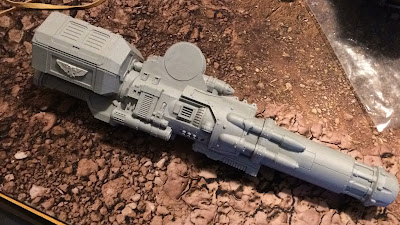 I also added Aquila symbols from a Warhound kit to the Ammo Hopper, to re-affirm my loyalty to the God Emperor of course and bless the ammunition! 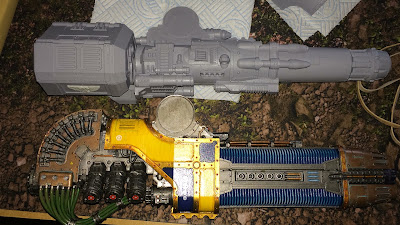 Size wise, a lot stubbier than the Belicosa Volcano Cannons, as long as the Sunfury Plasma Annihilator and a wide fat girthy barrel says alot about the damage potential of this beast of a cannon - large calibre shells which in game (AT28mm rules and AT) can knock the enemy Titans sideways or backward, literally, messing up their fire control solutions and against an un-shielded opponent, massive damage.
Cheers, Siph
Posted by Siph_Horridus 2 comments: 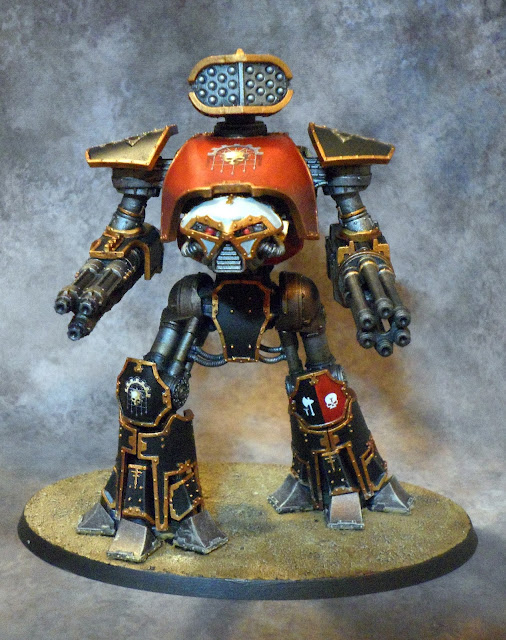 Hello all, thanks for dropping in. I have finally after a long time procrastinating and painting the big Titans, gotten around to painting some of my Adeptus Titanicus boxed game mini-Titans. 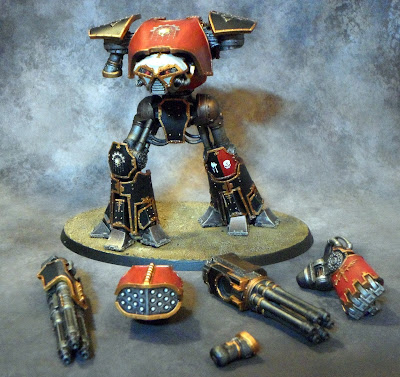 I plumped for a traitor Legio to contrast my main 40K Titan force of staunch loyalist Legio Astorum, I did think about recreating them in miniature but the draw of painting something different and a different mindset was too great. I also love the Mortis scheme of classic blacks/reds/gold which looks effective, also over a black basecoat is quite quick to do. 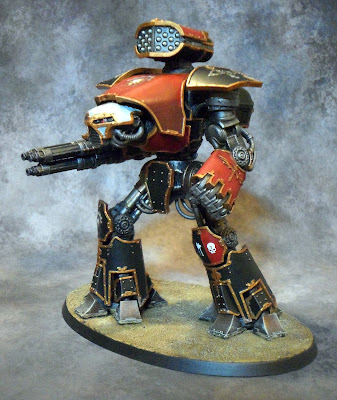 As you can see the titan has been fully magnetised for weapon swaps, each weapon has a 5mm x 1mm disc magnet, the arms two 2mm x 2mm rod magnets and the left arm swaps out with magnets so the close combat arms can replace the ranged weapons. Seen above with the Titan Power Fist. 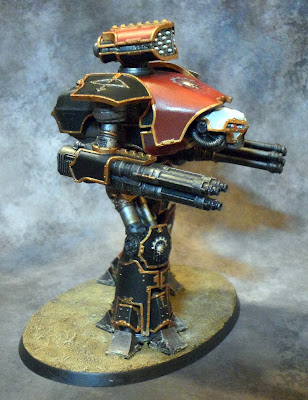 I bought several sheets of Legio Mortis decals from Forge World (I learnt my lesson from FW withdrawing the large Titan decal sheets - I have plenty) and the main colours are Abaddon Black, Retributor Gold and Mephiston Red, all washed with Agrax. 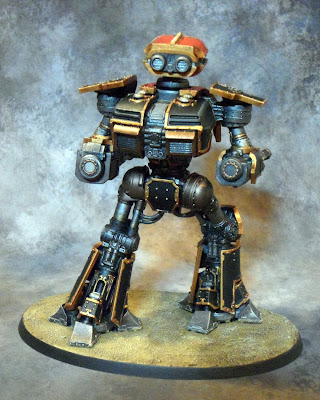 I also wanted a break from my usual Mournfang Brown bases, and chose something quick and smaller grain sized to help with scale, so GW Texture Armageddon Dust, washed Agrax and highlighted Ushabti Bone and a black bevelled edge - a departure from my normal is refreshing and this different game system allows a change. 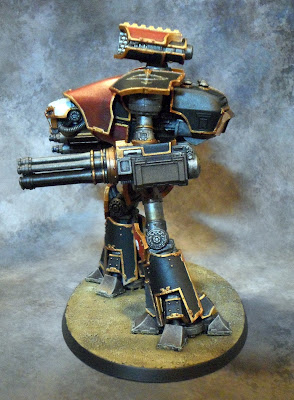 It is rather refreshing all round painting a Titan in only a few days and having different schemes, loyalties and bases. I am happy with my choices. 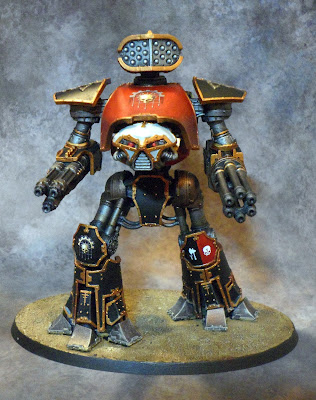 I will have to think of a suitable treacherous name for this traitor Engine! Onward and upward, I have another Reaver, two Warlords, two Warhounds and a Warbringer to add for starters. I'll look forward to some games of AT in the future when back in the country. 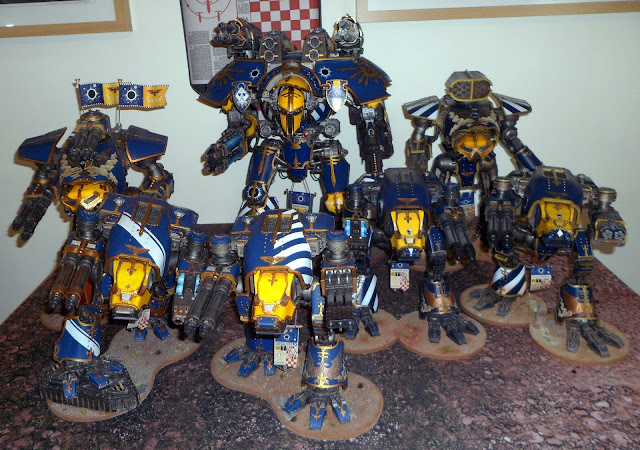 Hello Titan fans! Just a quick post today to show the Titan Maniple as it stands now, in all its Golden, Yellow and Blue livery! Yes I am suitably proud of myself, I added my own schemes to the three first ones painted by Richard Gray (three on right) and they all look great together! 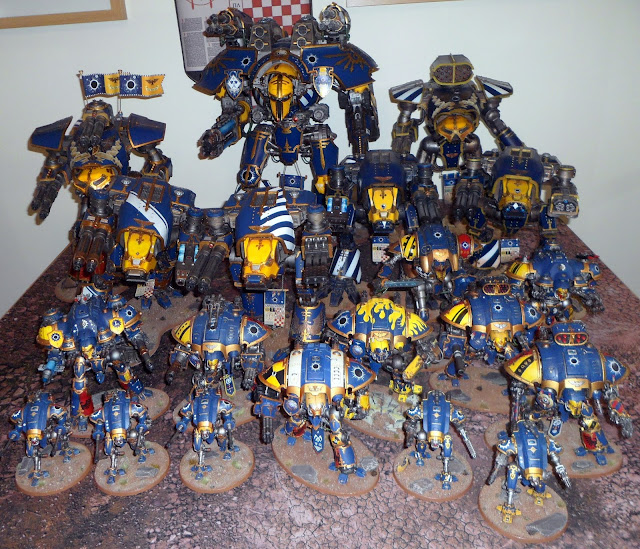 And just to top that! Here they are with the supporting Vassal Knights of Legio Astorum!
(Happy Titan noises...)
Cheers, Siph.
Posted by Siph_Horridus 5 comments: