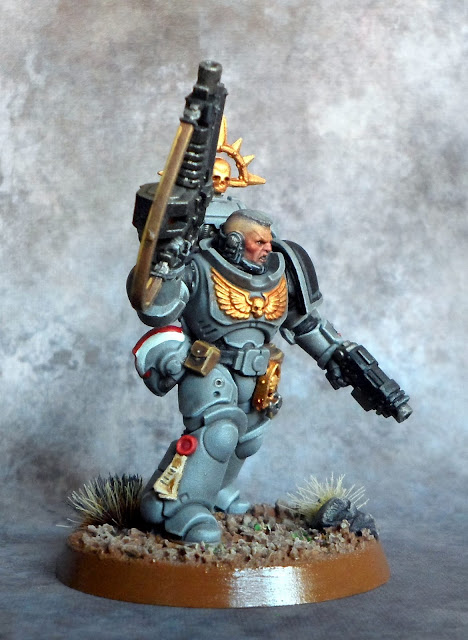 Hello all, thanks for dropping by, yes, yes, another Primaris Lieutenant... this one is from the Dark Imperium original release, and probably my favourite. He looks grizzled and oozes character. The Auto-Bolt Rifle means he can also be useful whilst sitting at the back encouraging the troops. 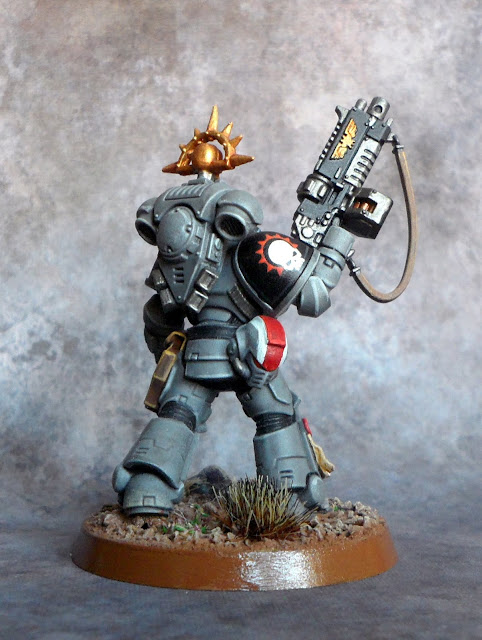 I added a gold icon to the power pack to match Lt Amulius from earlier, its a nice way to mark them out as Characters in a sea of grey power armour, okay not so great if you worry about snipers, but hey, this is 40K, its nice to give the quite vanilla Primaris some grim-dark character. I used the official Lieutenant shoulder markings, to keep with my conformist theme for the Relictors recent Primaris reinforcements - got to keep Roboute Guilliman on side... 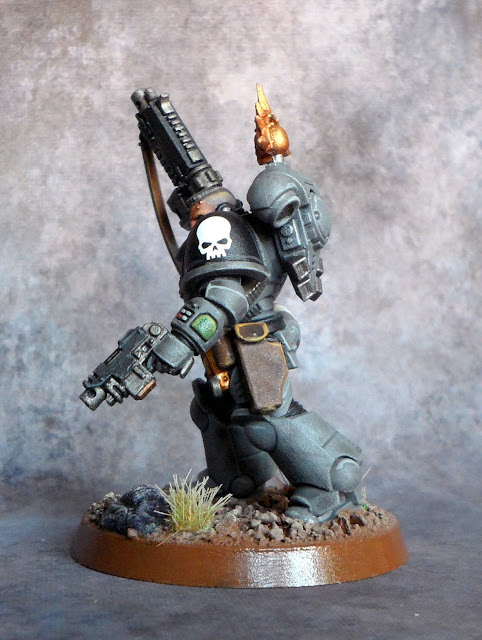 The leather is Mournfang Brown, washed Nuln and highlighted Balor Brown. The rock was some left over green stuff from elsewhere, nothing is wasted :) 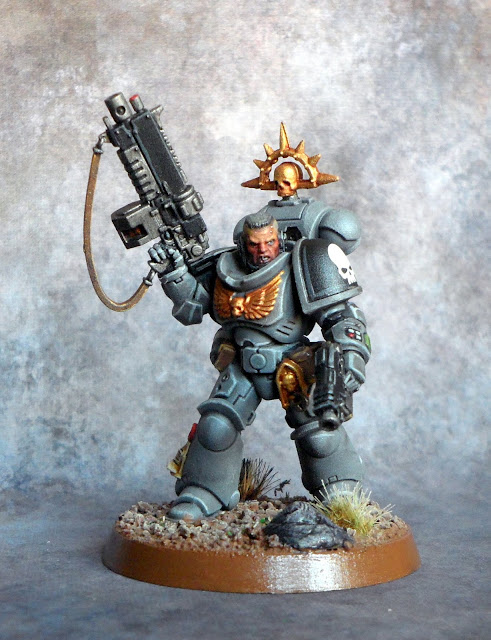 And of course, a special mention to the Commission Artist Kooperkape I got chatting to over on Reddit who kindly agreed to use my heads as practice, and a great job he did too! Far better than I could have achieved and really makes this character characterful! The rest of the paintjob is neat and tidy, but what draws you in is the face and shaved hair - brilliant job.
Cheers, Siph (10pts)
Posted by Siph_Horridus 3 comments: 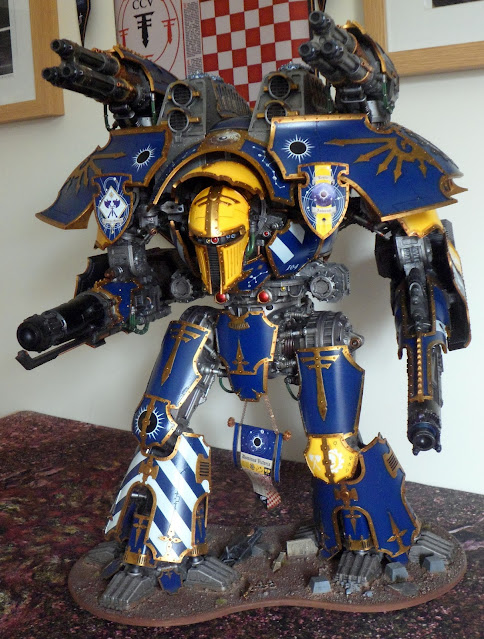 Hello Titanseers, welcome and thanks for dropping in. I have completed the re-arming of Warlord Titan Dominus Victoria, a mighty Mori-Quake Cannon now can be substituted in place for the Sunfury Plasma Annihilator if the added Boom! is required. 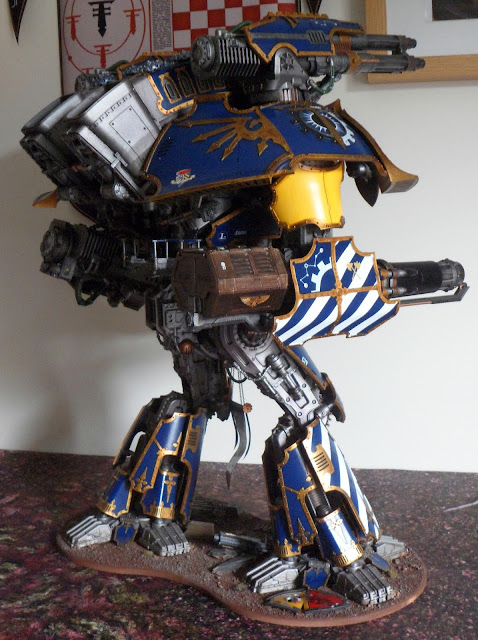 The Mori-Quake gives a whole lot more range (up to 360in in 40K, 288in with AT28mm which we play at Titian Owners Club Walks) which is far superior to the Sunfury 72in, its also twice the strength and Macro 3D6 rather than 2D6 hits and -5AP over -4AP... so superior indeed, just looks a little dull compared to bright blue plasma glowing coils! 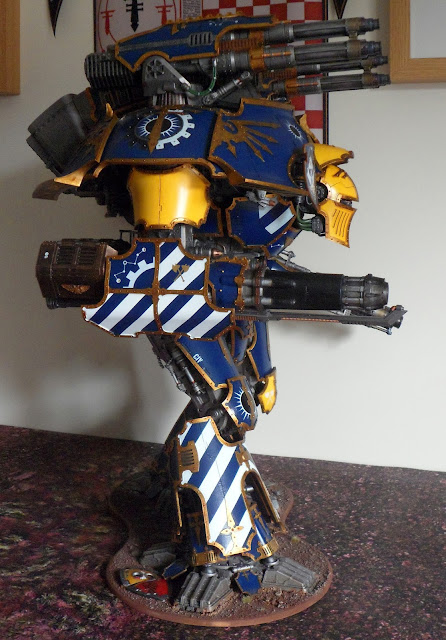 I opted for striped shield sections to echo the shin design, a signature look for my Maniple, every Titan has some stripes. The Black sheathed barrel was a last addition to differentiate where the massive recoil of the barrel retracts where the four pistons are, just forward of the blue armour cowling. The cog and star field echo the same designs found on the Belicosa Volcano Cannon on the opposite arm. 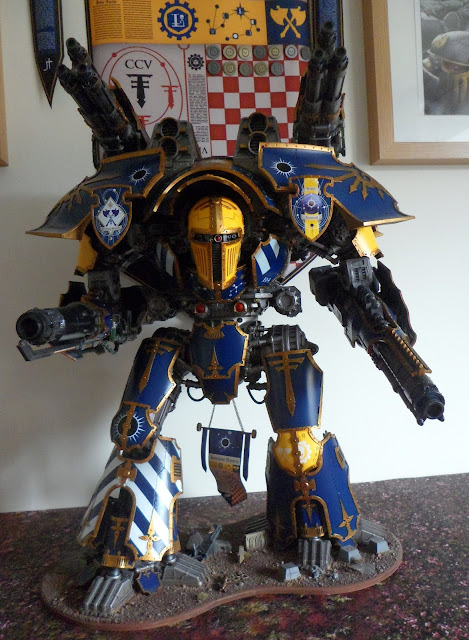 I like the shorter fatter barrel when compared to the Volcano Cannon.
The link to the whole Titan Construction process can be found HERE.

The underside of the Mori-Quake has the power cables where I added some colour, matching power cables elsewhere on the Warlord.

I opted for a dull brass Ammo Hopper to look different from the rest of the weapon, to show these are additional containers, loaded by ammo servitors before battle and can be discarded. The Aquila is from a Warhound Titan kit.

The weapon is magnetised using a 30mm rod, 8mm diameter Neodymium to match the arm magnets in the Titan, these provide ample pull and fix the arm securely, the arm is removed by rotating the arm up or down to break the magnet flush-facing and then comes away easily. 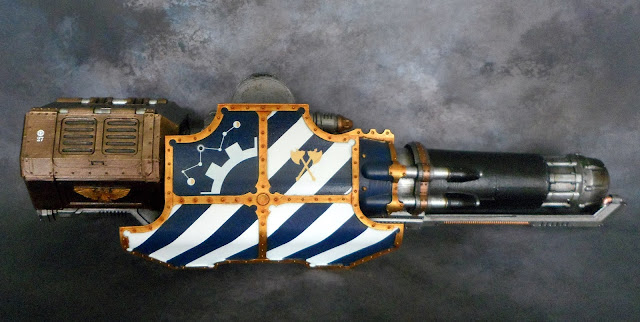 The ammo Magazine has some Tech-Adept markings to show this is container number 27, again to reinforce the message that these are plentiful and can be discarded. The crossed axes on the Shield denote Warlord classification. Decals were taken from the Forge World 28mm Legio Astorum Transfer sheet, now sadly OOP, and sought after!
Cheers, Siph (10pts)
Posted by Siph_Horridus 3 comments:

The Warbringer project is slowly coming together, however I am now waiting for FW customer services to send over a couple of pieces that are missing- they have been great as ever, I've seen a few negative comments online, my experiences are that they are great! 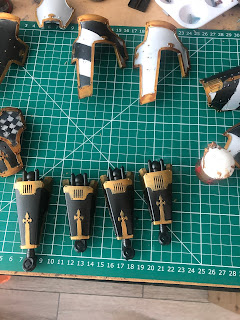 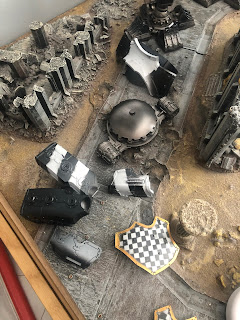 I've painted the armour plates to much up with my other Crucius titans, with a metallic black/white scheme, a couple of the paints have been painted in checker board appearance, the others either a plain colour or stripes. I am now on the long road of the gold trim. 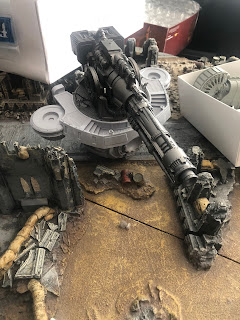 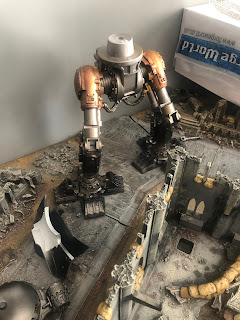 Below you can see how the Warbringer looks standing tall, with the converted Belicosa on the carapace - the model is slightly tilted forward with menace! as if she is firing all weapons at a distant titan target. 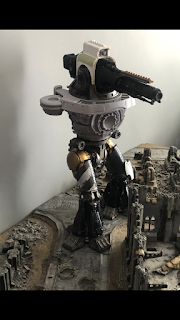 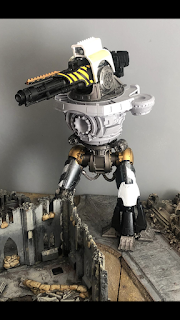 Thanks for stopping by! LH 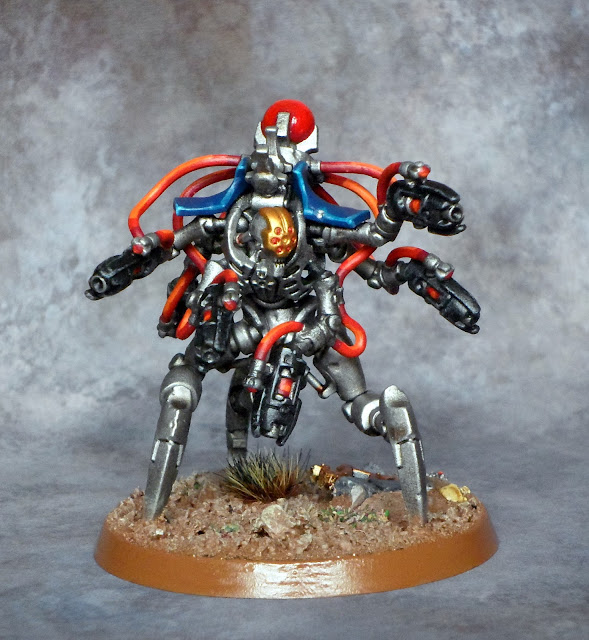 Welcome Overlords, thanks for dropping by. Continuing my additions to the growing Necron Dynasty I have added a Hexmark Destroyer to the force. GW says Hexmark Destroyers were once Deathmarks, the Hunters from Hyperspace assassins. "Bursting from their dimensional oubliettes like ambush predators, these hunchbacked monsters unleash inescapable hails of enmitic fire. Independent ocular targeting and optimised firing patterns leave their prey with no escape". Sounds a great selling point however I think MEQ's won't worry too much. 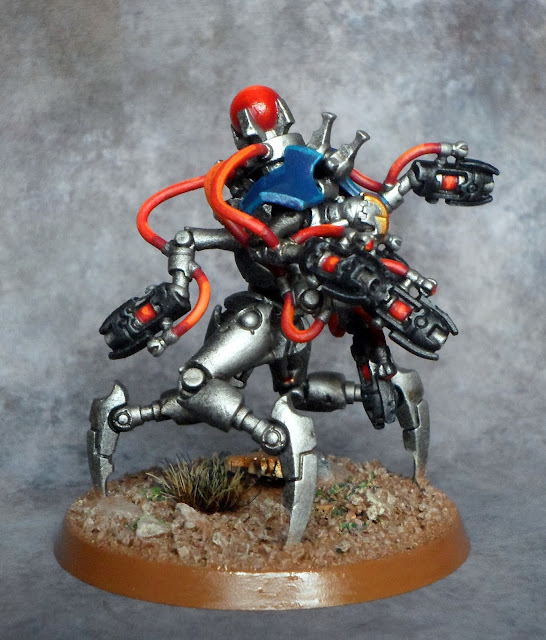 "All but unrivalled in close-range firepower, each Hexmark Destroyer is like a mobile gun battery, able to blast its way through hordes of enemy infantry with impunity" GW says, but its a little underwhelming with only being -1AP and 1Dmg, so unless its a horde you are trying to chew through it will need more help. 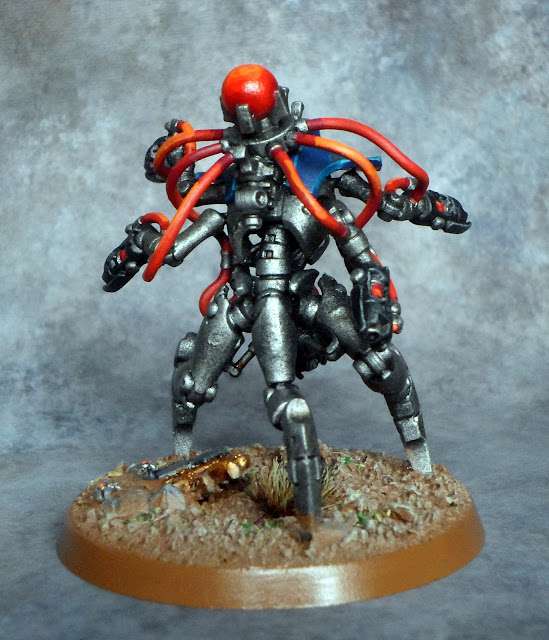 They do have a decent rule like the Deathmarks so can appear and shoot in the opposition's movement phase when something arrives from Deep Strike and can shoot the arrivals, just like the Deathmarks and each successful wound lets you gain another shot (up to six original shots) so they can be effective against Scions/Guard Vets and hordes. 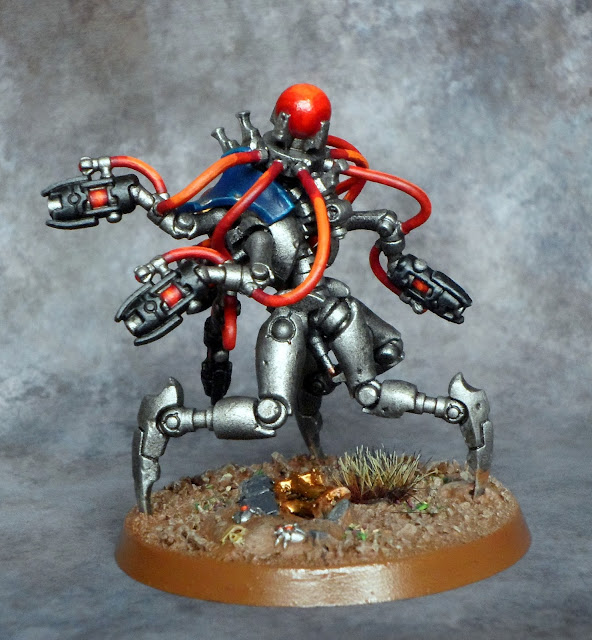 Nice additions of some scenery and Scarabs to the base. 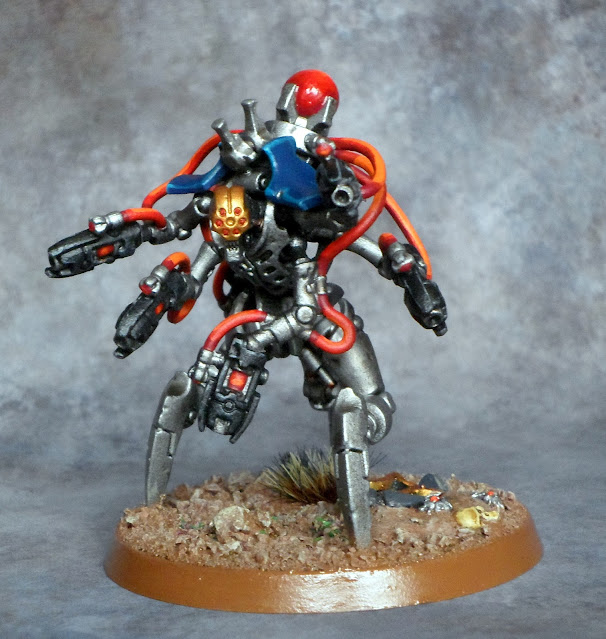 I do love the multiple arms, and I thought the GSC Kelomorph had a cool gunslinger vibe with three arms... this doubled it! 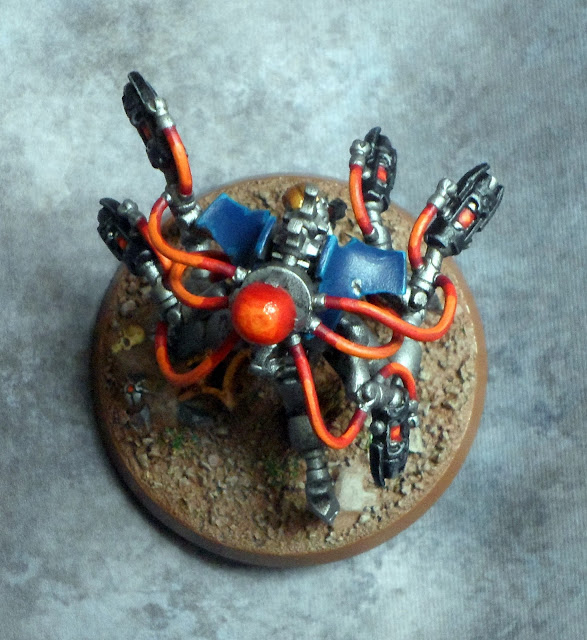 Although its quite a small mini, he does fill a large base completely which is a great and the gubbins on the top with all the wires looks great.
Cheers, Siph (10pts)
Posted by Siph_Horridus 5 comments: 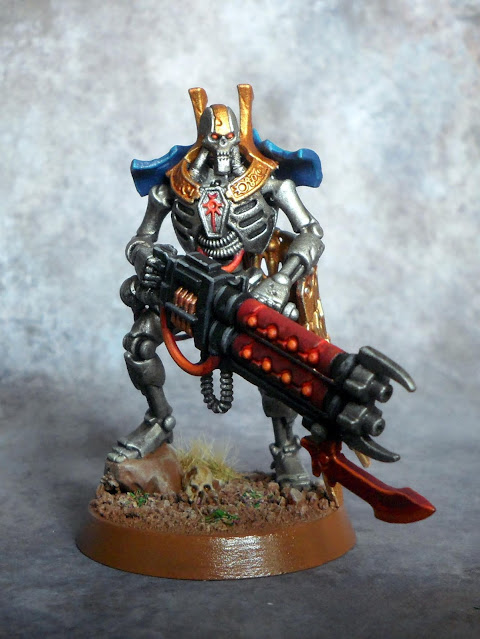 Welcome Overlords, more expansion to the Necron Dynasty, and some fleshing out of the Necron Royal Court with the addition of a Royal Warden. Royal Wardens are Necrons who serve directly under a Overlord and ensure their lord's will is carried out by the Dynasty 's armies. Royal Wardens possess the initiative to adapt on the battlefield and can modify the orders to phalanxes of Necron Infantry. While they retain independence of thought, their command protocols still make them unquestionably loyal. 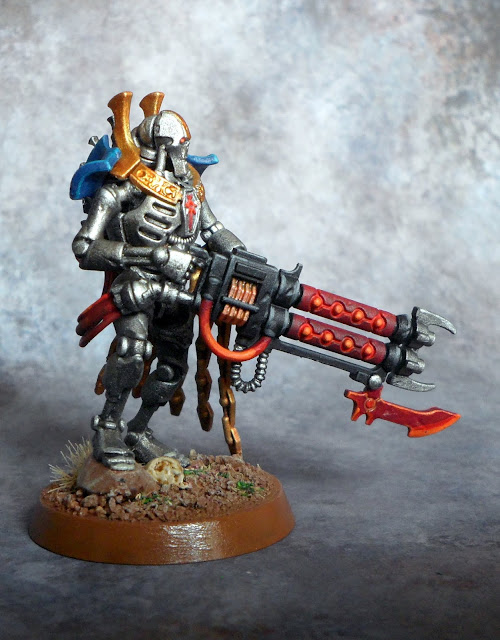 I guess he is the Lieutenant to the Overlord, buffing nearby troops and adding to their firepower with his relic Gauss Blaster, a tasty 30in Gauss so he can sit at the rear of the phalanx and still shoot. 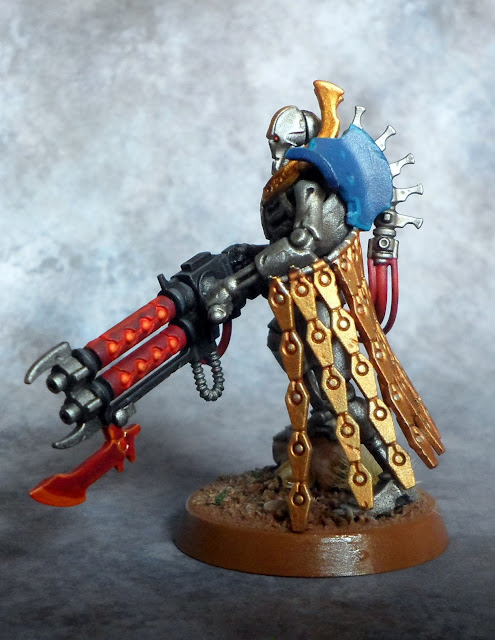 I used my usual palette of metals and blue armour plates adding gold to higher ranking members, so he got a substantial amount of bling. 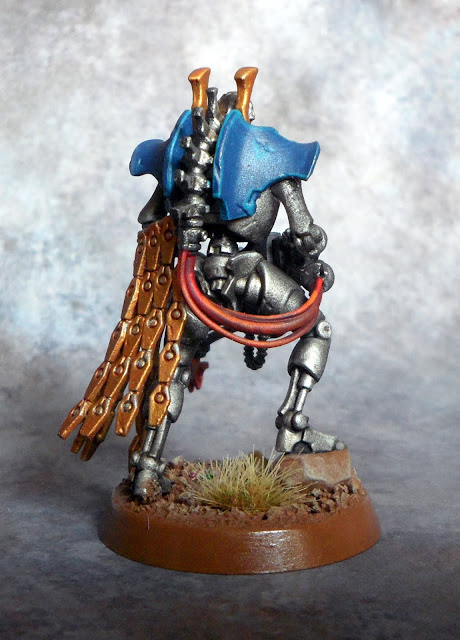 A nice simple and cool looking mini to give some well needed buffs.
Cheers, Siph (10pts)
Posted by Siph_Horridus 2 comments: