Finally, not another Tactical marine to do, 60 done and not a moment too soon. I'm off this weekend back to work abroad so the hobby will take a back seat for a month or so, Pornstarjedi is still up and about though, so 'Weemen' will continue in it's haphazard way.

These guys are the AOBR marines, plus a converted Sergeant using the AOBR Sergeant shoulder pad for the raised tactical arrow. Still have to do the Dred and Termies from AOBR, but pleased these are done. Not sure these will get a Rhino anytime soon as 5 is enough for now, but eventually they will (just for that completed Battle Company!)
Usual paintjob, Codex Grey, Badab Black wash, Fortress Grey highlights and 'Ardcoated pads for a sheen look (also locks the transfer on). I've been using the Micro Sol and Micro Set for transfer application - go buy some, it rocks on curved surfaces.
Beaten last years painting tally with these, and one more ticked off project list. Bigger pics in 'Finished Relictors' album in sidebar>>>>
Posted by Siph_Horridus 4 comments:

Finally home... for a wee bit 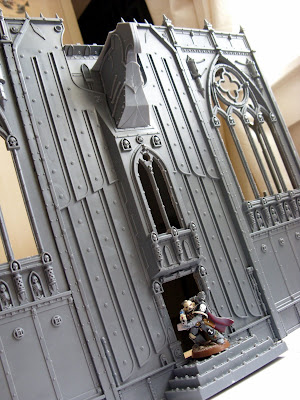 I have been away from home, but not the hobby, for a couple of months shore based down South but am home for a week before having to go to a proper job and work for a living back at sea starting a new assignment with a new ship.
This does however, provide me with a chance to open up all my latest purchases, (oh and catch up with the wife!) and set about at least prepping them for when I'm home again in the future. I have also got a chance to finish off my last Tactical Sqd, 60 Tac marines done and dusted, I'll post pictures of the final five AOBR (Previous half) marines later this week... next on to Devastators, Assault, Termies etc. etc. 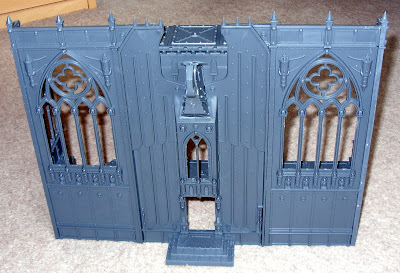 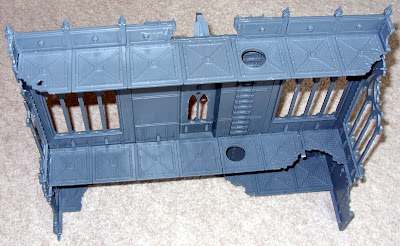 Here's a quick look at my latest terrain piece WIP. I like it, however I've now decided to get another so I can do the other half of the building with a corner piece. Doh, curse you GW! It is exceptionally tall and a great place to lurk those Hvy Wpn Sqds. Yet to base it, add rubble, texture, paint etc. But, it gives you another chance to see it before you go buy yours...
And although I'll be away for great swathes, Pornstarjedi is still a land lubber and (hopefully) painting away (bases Jedi!) and posting...
Posted by Siph_Horridus 3 comments:

Another weekend, another cheeky battle between the mighty Ultramarines and the near heretical Relictors. 2000 points (ish) a side. The basic plot was to follow-on from the closely fought UM defeat during the last confrontation.

The scenario was that two critical points had been located around the large ruins that was once a proud imperial city. The Imperial Sanctuary to the north of the ruins and an abandoned chaos temple. (Siph had just picked up the new temple of skulls, great piece of terrain for the Relictors!) to the south. These were the objectives in a take and hold mission...

Deployment was done using the dawn of war rules, one HQ, and two troop choices were deployed, with the rest to follow on turn 1. Both the UM and Rel's deployed one troop choice around the obs, and the troop choices towards the large ruin. Rhino's were deployed close to their respective tactical squads. An UM Librarian was deployed further forward with the tactical marines and a Rel Chaplain with jumppack close to Siph's obj. Siph deployed his infiltrating scouts initially in the newly build watch tower, (which I thought was going to be a pain, Siph thought too isolated) however a quick re-think and they were positioned on the balcony of the ruins, 4 stories above the ground, armed with bolters and a missile launcher. 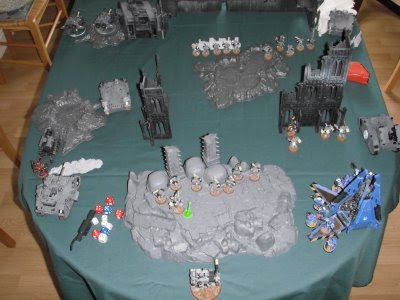 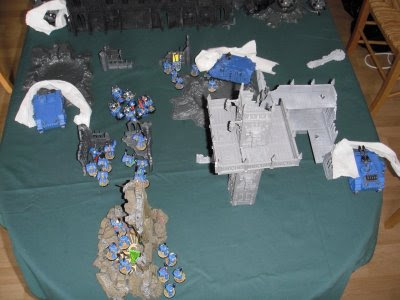 Relictors turn one saw a charge forward with both Rhinos and a 2 Landspeeder Tornado squadron down each flank. (Siph loves his rhino walls... Jedi). A Dreadnought and Whirlwind moved into support the objective and a 5 man Assault Sqd joined the Chaplain. The Scouts opened fire at the Tactical Sqd below, inflicting 2 casualties, again Siph's rolling for the missile launcher failed and the missile fired at almost point blank range and missed. 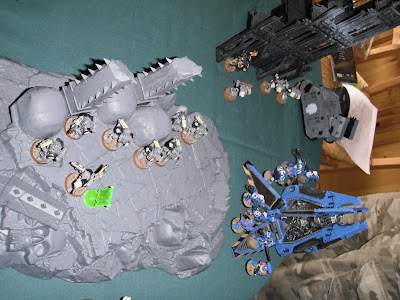 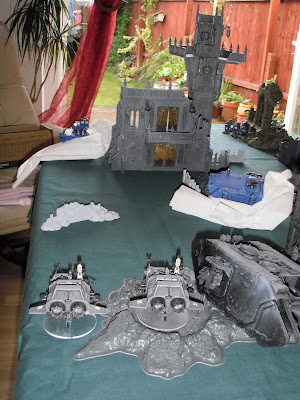 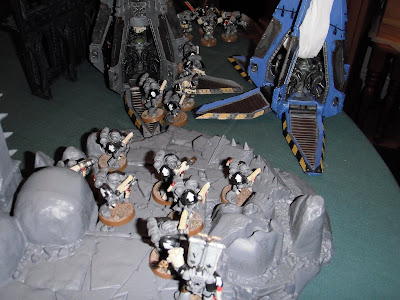 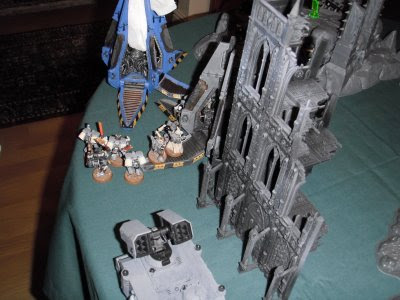 In return, UM turn 1 started with the scream of a drop pod assault as a drop pod full of Sternguard crashed just east of the Relictors objectives, just behind the Assault marines, Chaplain and Whirlwind. The Bike Sqd and UM Predator rolled onto the field, with the Assault marines and jumppack equipped Captain charged forward. The shooting phase saw the demise of 3 scouts due to the sharp shooting of the tactical sqd close to the centre ruin, however the sergeant managed to kill himself with this plasma pistol! (Doh. 1.) The Sternguard opened fire, operating as two combat squads, fired at two different units, killing 2 assault marines, and 2 tactical marines, again a 1 was rolled with vengeance rounds, and another armour save failed! two marines dead due to their own weapons!! (Doh! 2. Note to self, more hours of blessing ones weapons is needed.) The Librarian took out another Scout with smite, the remaining scout fled into the ruin.

Relictors turn 2 saw the arrival of the drop pod, and 10 sternguard. The DP landed just by the UM drop pod, and the sternguard wasted no time in blasting their UM counterparts with vengeance rounds killing all of them. The dreadnought destroyed the DP with lascannon fire. The Predator fired its autocannon and a hunterkiller missile at the UM Pred annihilator, again both missed! Both Landspeeders joined in and fired Multimelta shots at the predator, these missed also, one hit but Jedi made his cover save due to the smoke launchers! (cue Siph cursing the dice gods!) 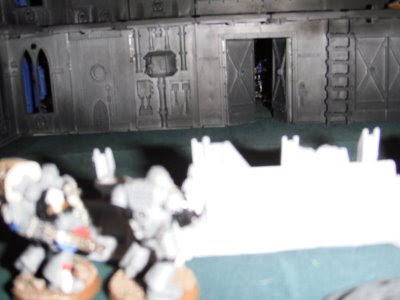 The UM turn was a turn that saw the arrival of both the UM Assault Terminators and another drop pod. Both deep-stroke in front of the ruin. The shooting phase saw lots of misses, another UM was killed due to his plasma gun getting hot (Doh! 3). The Predator destroyed on of the Landspeeders with 4 lascannon shots. Another Relictor was killed with heavy bolter fire, and the Librarian added another 2 kills with smite forcing the combat squad to flee.

The arrival of the Relictors Assault Terminators and Librarian. They arrived close to the UM objective, could they contest the objective? The thunderfire fired upon the combat squad coming out of the Drop Pod and killed 3, causing them to run, the remaining landspeeder fired at the UM Pred missing again. The Pred D fired at the Pred also with the autocannon, this hit but didn't penetrate. The dreadnought fired at the Pred, causing the Storm Bolter to be destroyed (whoopie doo, Siph). Other shooting saw the Whirlwind hit home on the Assault sqd and the UM captain. The Captain was wounded along with one marine. 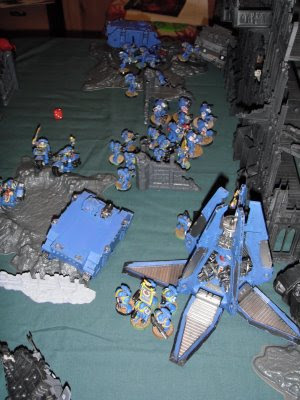 UM turn 3 saw a massive charge towards the menacing Terminators, all troops, bikers and assualt troops moved into position and all opened fire at the terminators, a ridiculously high number of hits wounded, 3 terminators fell. This resulted in the terminators fleeing. (mighty bolter fire! Jedi) More super bolter fire from the combat squad by the Drop Pod fired at the remaining Landspeeder stunning the crew. The other movement saw the UM Terminators charge through the ruins towards the Relictors objective. 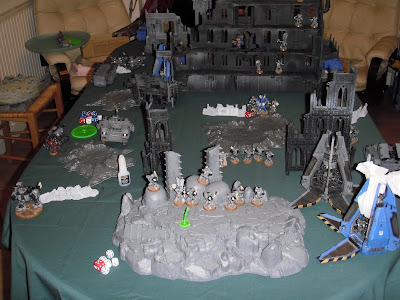 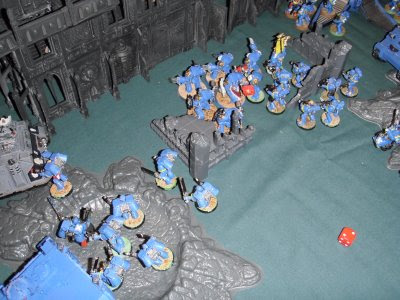 Turn 4 saw the Relictor Sternguard move towards the terminators, along with the Assualt sqd and chaplain. The Rel terminators rallied however could do nothing apart from look at the numerous weapons pointing their way. The Thunderfire fired upon the combat squad, killing 2. The rest of the turn saw very ineffective shooting. The close combat in the middle of the board between the terminators and assault marines/chaplain/sternguard was a tie, with one kill each. 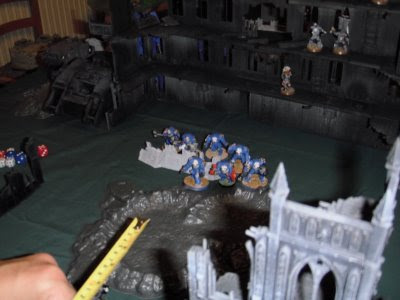 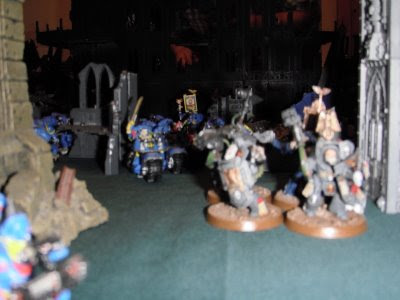 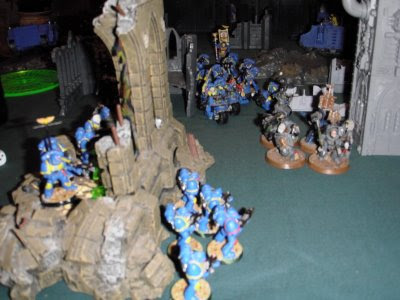 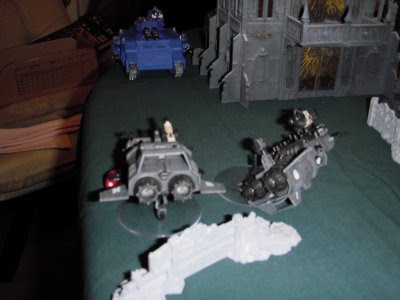 The UM turn saw the death of the terminators and librarian, again down to numerous shots from pretty much all of the UM force. The final shot was the librarian with smite. Further shooting from the combat squad finally killed the remaining LS.

Turn 5 saw ineffective shooting again, the only success was the Whirlwind taking out a biker. The main part of turn 5 was the close combat in the centre, again the combat was drawn with 2 loses on each side. 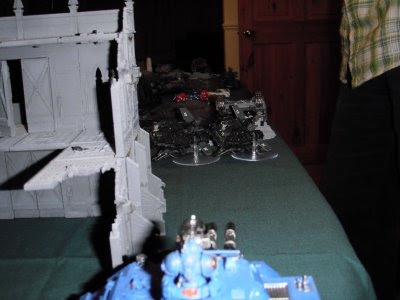 UM turn started with a bang as the UM Pred fired and destroyed the dreadnought! (And a cheeky laugh as three six's were rolled to hit/penetrate and on the damage chart! Jedi) The close combat again saw loses on both sides, the chaplain was killed with a thunderhammer blow, as well as three other marines. 1 UM terminator was killed in returned. The dice was rolled for another time but the game ended. A draw!! 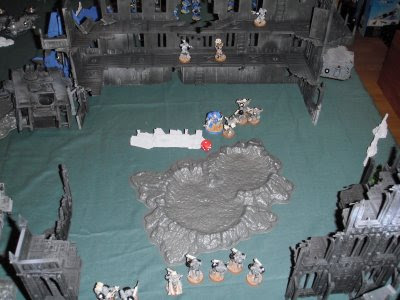 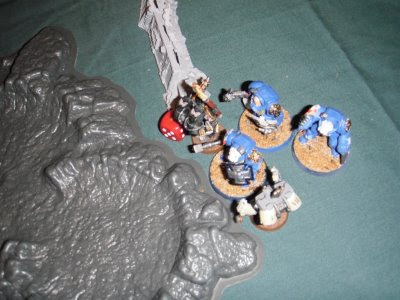 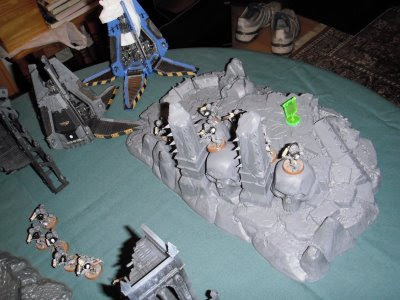 Jedi's review - a very good battle which pivoted on several key moments. I really wished I had the guts to deep strike the second Drop Pod and terminators into the relictors deployment zone, this could of turned in the UM favour. My unit of the match was the bolters that took out the terminators and a land speeder. showing that numerous bolter shots have the potential for taking anything out!

Siph's Notes - as soon as my Termies were wiped out, I could only force a draw, but luckily for me Jedi seemed to want to kill them rather than go for the charge toward my objective. Only his Termies came and they slowly died and were 3 turns away from getting there - I tied them up in combat. One day my Landspeeders might actually hit something! Pornstarjedi should have used his bikes best advantage - speed! Oh, and check your points cost - Jedi's armylist was about a few hundred points over 2000 when we started, only a query by me saw him adding it up properly and removing some unengaged models.

And this next picture is for Jedi - haha. 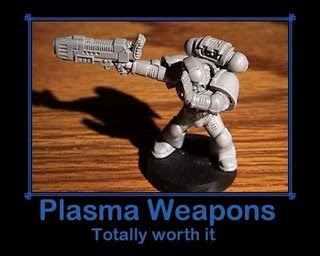 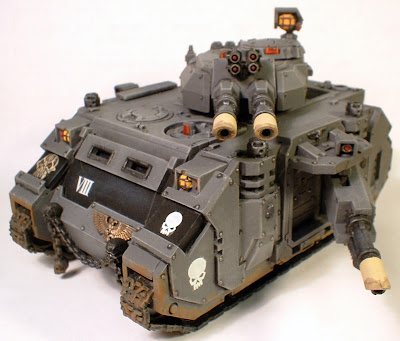 I have finally finished my 2nd Predator for the Relictors force. It is an expensive choice with the lascannon sponsons but with my dice rolling - i need every cannon shot to penetrate and roll higher than my normal 2 on the damage tables! 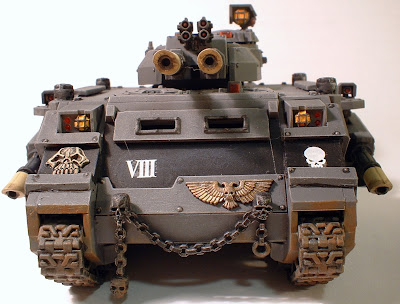 This Predator completes my order from Paintedfigs.com, which included the other Pred and the 3 Vindicators (so, half painting points for me). I have added the detailing and weathering and a bucket load of Boltgun Metal rivets! This beauty is also wearing the Extra Armour / Reinforced Armour from Forgeworld, I figured an anti-armour vehicle should at least try to stay alive when up against its prey, normally Pornstarjedi's LR or mirrored Predator Annihilator. 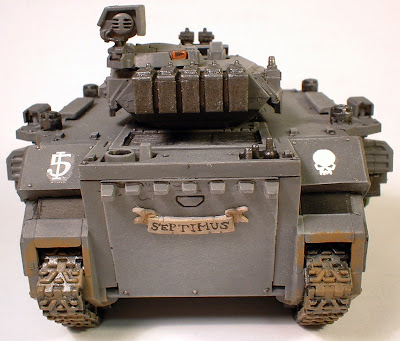 So, welcome 'Septimus', may all your hits be penetrating... Pictures also in 'Finished Relictors' gallery in the sidebar but again in liited pixels as on secondary camera >>>>>
Posted by Siph_Horridus 7 comments: