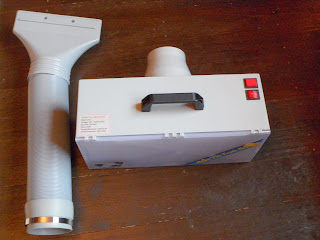 Another Christmas Pressie leading on from my recent Birthday Pressie, I am lucky enough to have an Airbrush desk vent system now so I can paint inside - it's too cold outside and the garage lacks electricity supply so this present is ideal! 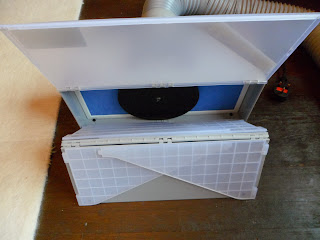 The briefcase sized vent opens up easily and folds down the spray area, it all clicks into place and the electrical cable is even retractable. Very neat and simple. 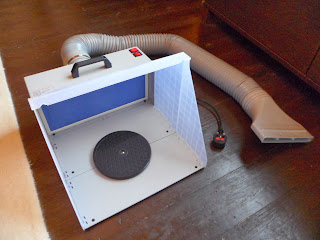 The system can be used to vent straight through the rear of the case into the room, however I like the idea of venting to the fresh air so if the filter doesn't 100% clean the paint out of the exhaust, it won't be sucked back into my lungs! It also came with a turntable, ideal!

Right now I am (Siph) working on an Inquisitor, a Necron Obelisk, a StormRaven and a Relic Whirlwind Scorpius. Lord Halfpenny is working on his Relic Scorpius and 6thDegree is buried in the Iron Warriors Machine Forge somewhere...

Have a great New Year and a decent 2014 from all of us at Weemen HQ - Siph, Lord Halfpenny and 6thDegree ;)
Posted by Siph_Horridus 4 comments: 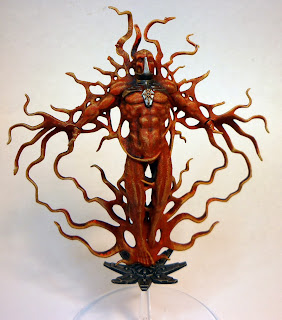 I was lucky enough to get a Necron Obelisk / Tesseract Vault for Christmas and have decided to build it as an Obelisk for that lovely Gravity Pulse each turn to ground flyers... there is always next year for a Tesseract Vault! So as I build and paint the big bit, the leftovers give enough pieces for a C'Tan Shard or as Alex (From the Fang) points out, a Transcendent C'Tan! 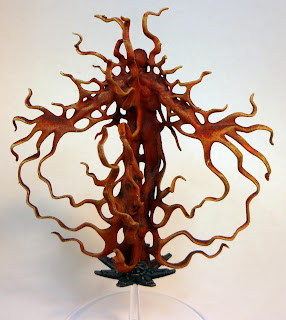 I decided to build it with a metal base piece so imply it is still under the control of a Necron Overlord, and from a black base I built up the colours from Scab Red through to Yellow. I know fire glows the brightest from the centre, but I'll leave that to the next year's Shard... 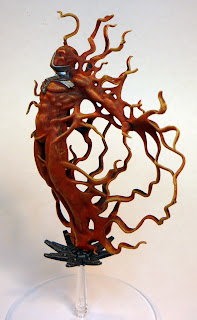 He has a simple collar and face mask to reflect the same colour scheme as the Necron Warriors with a little brass Icon. A bonus miniature, from leftovers - nice!

Hope you all had a good Christmas and a nice New Year!
Posted by Siph_Horridus 4 comments: 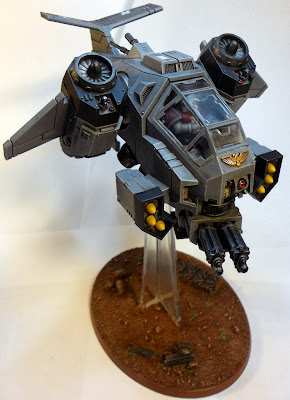 Hi All, hope you are finished with work for the Crimbo Season, if not, thank-you for doing whatever essential work you do. I am lucky enough to be home for Christmas, many of my colleagues are not and are at sea over this period.

Anyway, thought I should post something I have just finished, my second StormTalon Gunship, finally completed after many a month in the pile of boxes labelled 'to-do', I bought this one at the same time as the first, so a while back! The first StormTalon can be found here, completed in Jun 2012.

This one is armed with Skyhammer Missles, for that lovely long range and S7 Heavy 3 goodness. Should ensure he takes out whatever anti-air the opposing force has on his arrival and then can get to grips with the support role. I've not bothered with magnetising the weapons as the first one has been, I envisage getting more use from a Skyhammer Armed Stormtalon. The Assault Cannon's are moveable side-to-side, here tracking where the pilot is looking. 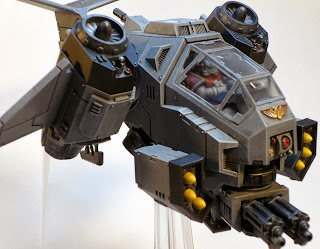 The Techmarine pilot is painted to match the other Techmarines I have in the army already, grey arms and helmet but Mechanicus red armour. The wings are angled at 45 degrees and the landing gear has been extended to indicate it is either in the hover or coming to a hover. Again, I have glued the wings 'backward' to give a better more streamlined profile from above, more conventional wing like than the GW intended design. 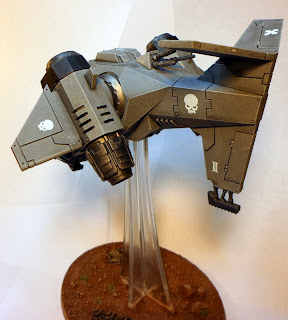 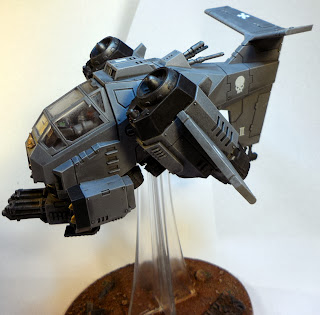 The yellow missiles match the other missiles in the army, like the Centurion Sergeant chest weapon, Deathstorm Drop Pod and Whirlwind - visually linking it in with these. 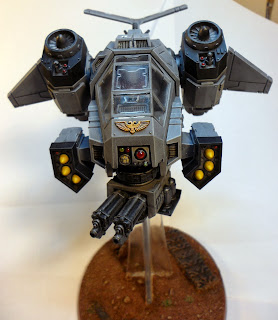 The base is the only area I think I can easily improve with the next flyer, my flying bases so far are really simple and it seems like a waste of good basing to have them plain as they are.  Maybe a little scenery on the next flyer...

Finally, a shot with the first StormTalon, a nice pair of escorts to add some serious firepower to the army so far. And more importantly, another one off the to-do pile before Santa (hopefully) delivers yet more goodies! 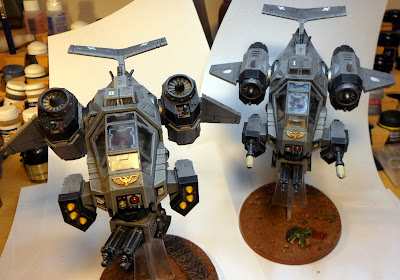 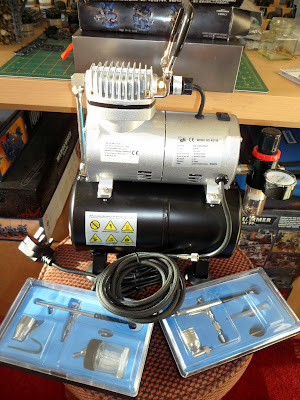 Hello Readers, sorry it's been a while. We haven't dropped off the planet, just been around the other side for a bit. Lord Halfpenny has been working hard at home and abroad a little bit, 6thDegree has been busy working Nottingham way and Siph has just returned from 2 months away at sea in the Middle East.

I myself am now home for the Crimbo period and got back to a wonderful Birthday present I have only just got to open - thanks to my gorgeous girlfriend, I am now the proud owner of an Airbrush!

Slightly daunting as I've only ever dabbled unsuccessfully with the GW tinned variety, this one has a reservoir which I know is good, two air brushes, the merits of which I am clueless and up to 4bar pressure compressor... so the good question is...

Can anyone point me in the right direction to good blog articles or give some practical advice when it comes to using this fine apparatus? I will no doubt experiment but some heads-up would be appreciated!!

Happy Birthday to me indeed.  :)   Oh, and some more Centurions found themselves into my gift pile too! CC variants I think this time....