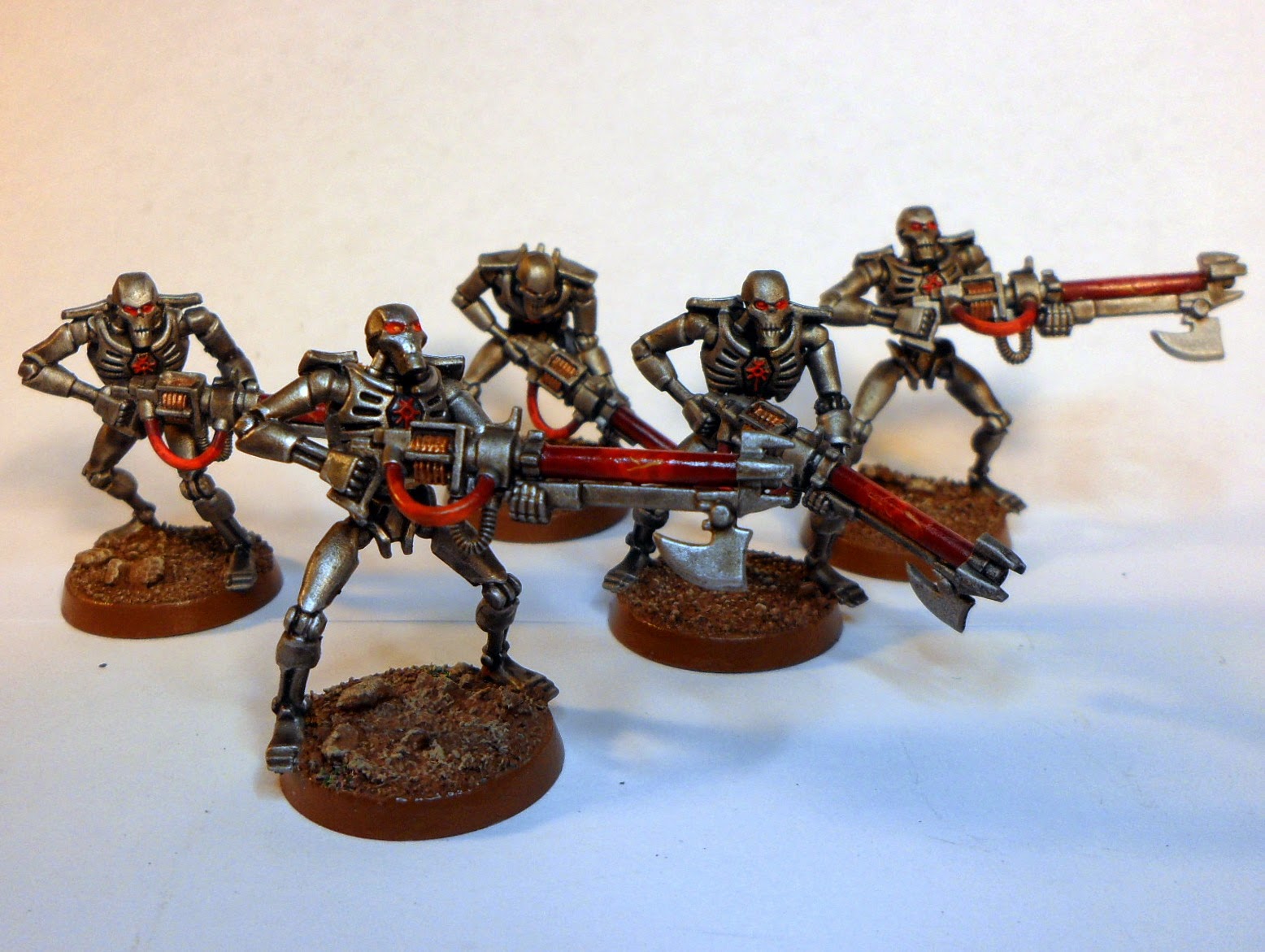 It was about time I progressed a little with my 'other' army after so many Space Marine Relictors Chapter new toys goodness, so some time and effort (very little) went towards my Necron force with a first Troop choice, some lowly Necron Warriors in an attempt to offer a valid second force, albeit a small 'secondary detachment' soon for my games with Lord Halfpenny.

I finally had decided on a colour scheme and what colour and effect to do the gauss energy, so after experimenting with the Obelisk after Christmas and a Night Scythe / Doom Scythe, the colours were still being finalised and I have stuck with the red energy.

As these are lowly warriors, they don't show any of the accent colour for armour plates of a dark blue as seen in the other vehicles. I intend to add blue armour to more important troops and characters to show their higher status, but these dudes are the simplest lowliest troopers. And the first of a few...

I'm currently working on the repaint of the Necron Destroyer I painted as a test scheme way back in May 2012.
Posted by Siph_Horridus No comments:

WIP - Life on an Ocean Wave 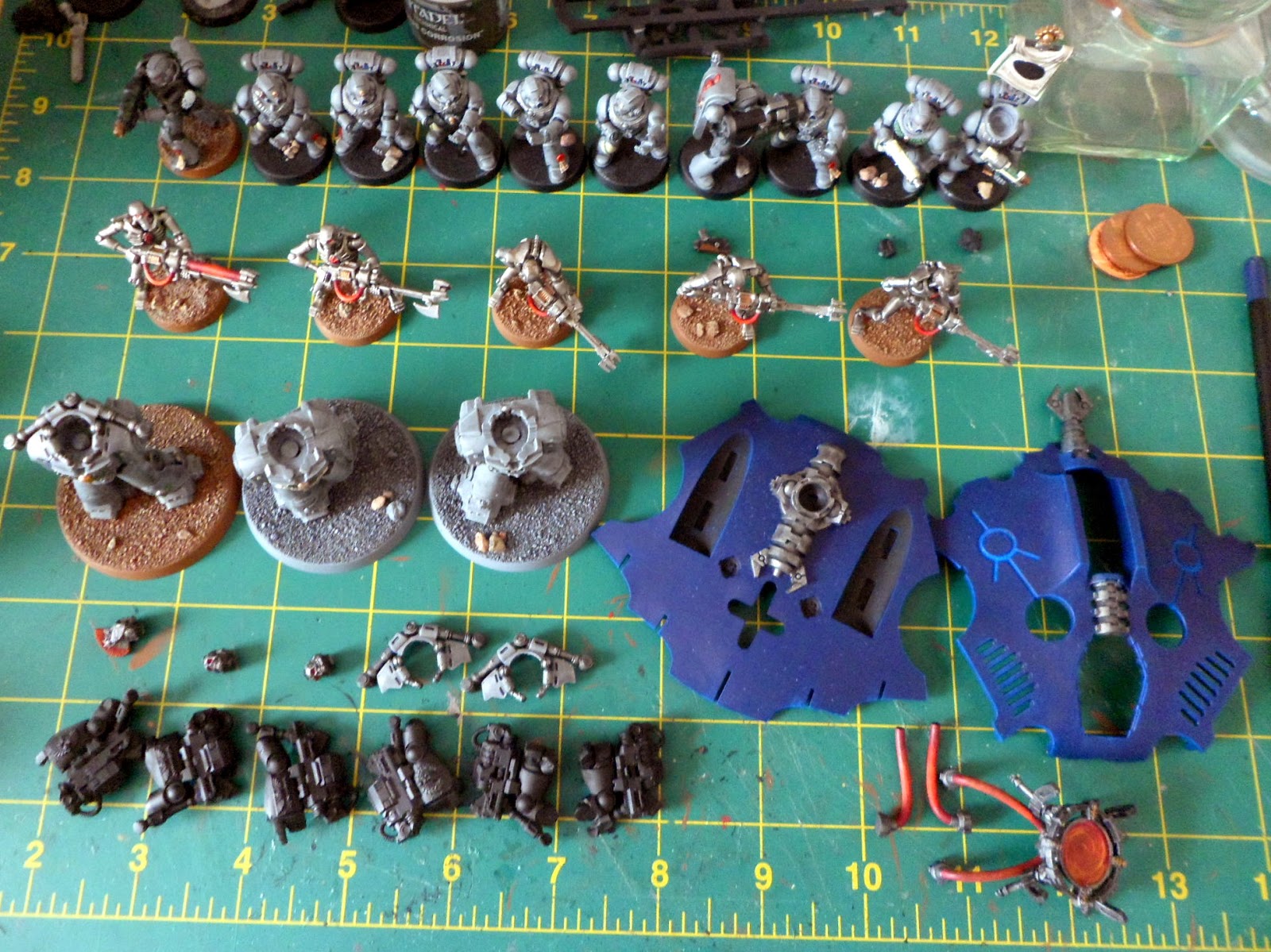 I have been away at sea for a while, but not idle - whilst serving the greater good, making the oceans safer and hunting for downed aeroplanes, I have been busy in my free evenings doing a little work with the brushes, dependent on sea state and ship roll, I made some good progress on the new Tactical Squad plastics, made some progress (finally) with some of my Necrons and started on another squad of Centurions, this time Assault Centurions.

The pennies add a nice stable weight to the underside of the bases, a top tip!

I'll be progressing with various projects whilst back home, including a StormRaven with Chapterhouse extension plus finishing these of course!
Posted by Siph_Horridus No comments:

A quick post to start the week - here we have 'Fateweaver'. The moment I started my daemon force I knew I needed Fateweaver- the rules for him in 5th Edition were amazing with re-rolls galore and with lots of options available for causing lots of pain and suffering to your opponents force. With the new Daemons 6th Edition codex he has been slightly nerfed. 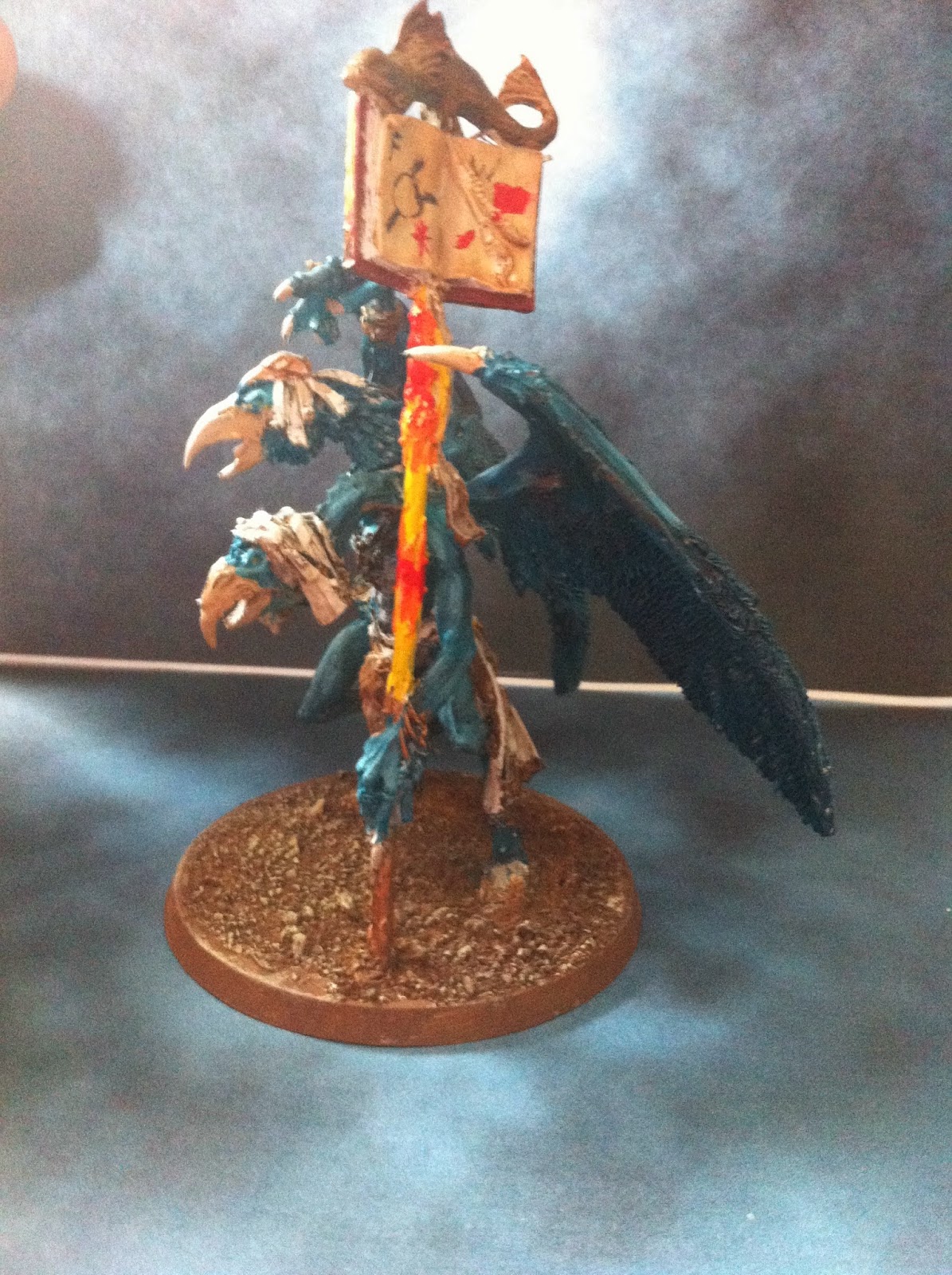 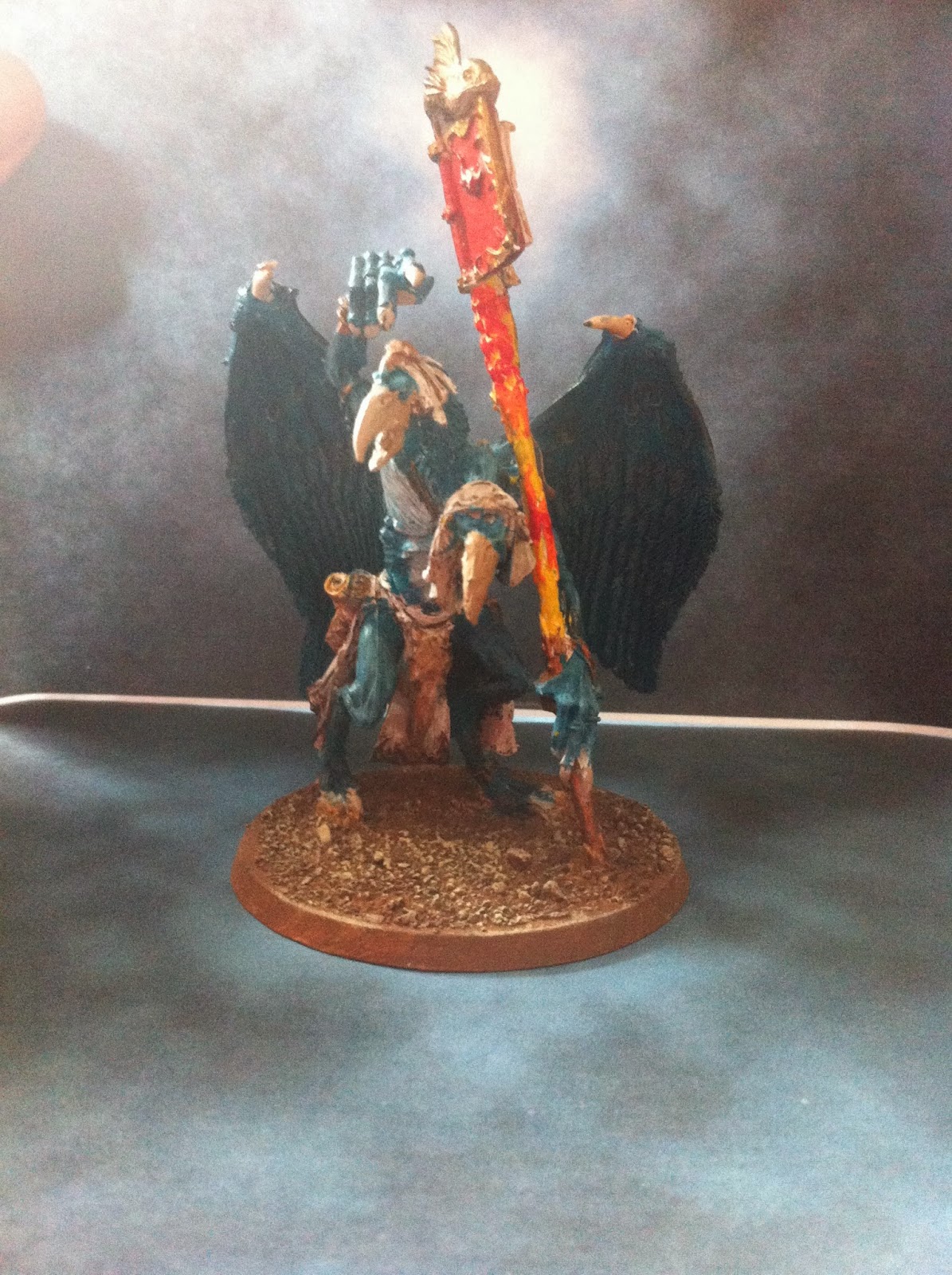 I've used a mainly 'blue' scheme with highlights up on the wings to show the feathery appearance. The staff I painted to fit in with my khrone 'flame' swords with the staff having a yellow/orange/red glow to it. 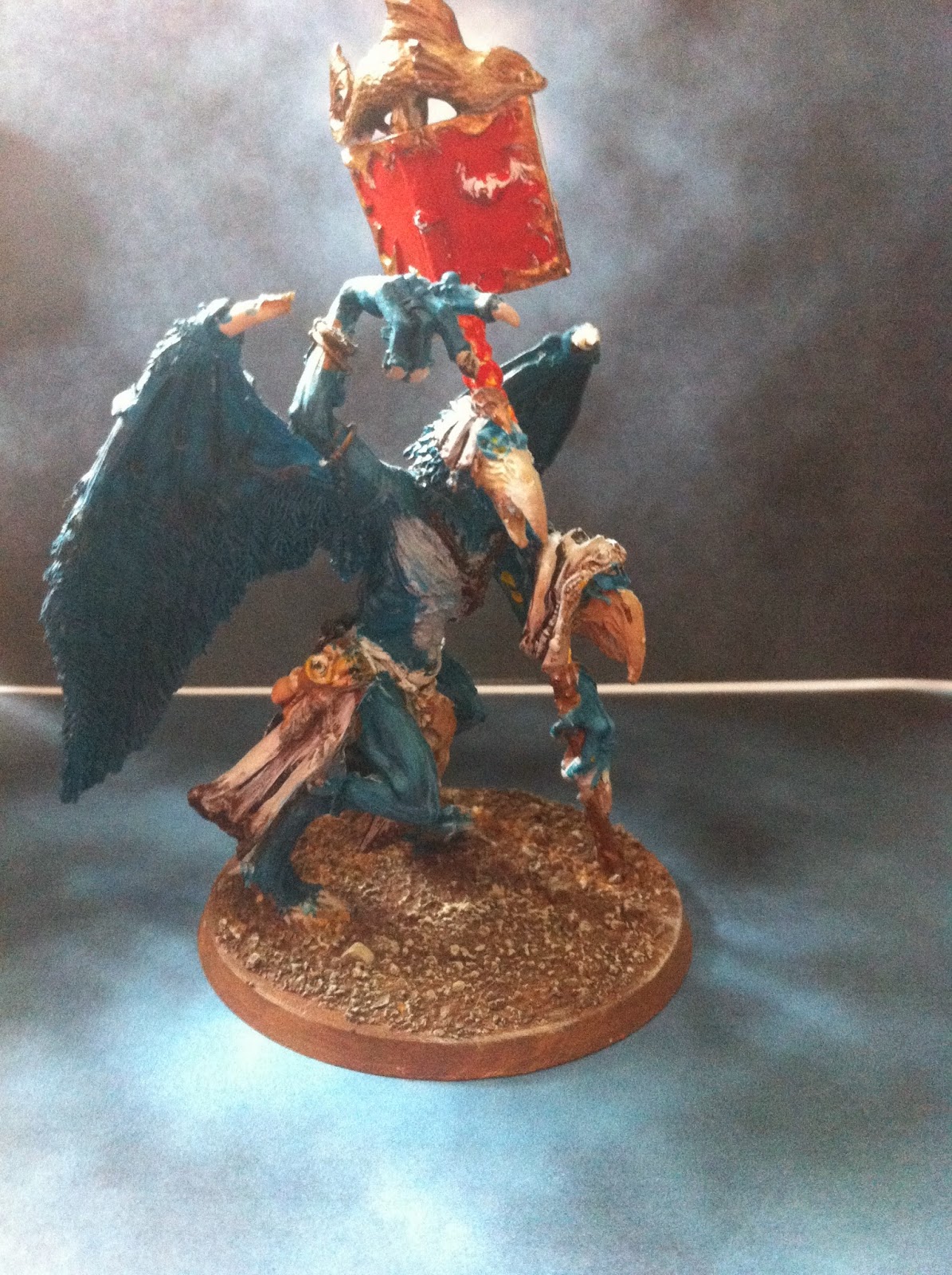 My favourite 'in battle moment' with Fateweaver has to be either the time he battled with 6thdegree's Swarmlord in close combat with a ridiculous number of re-rerolls or the time at BlogWars, in which he turned the game in one turn by turning a Tyranid Tervigon into a chaos spawn.
I hope you like. 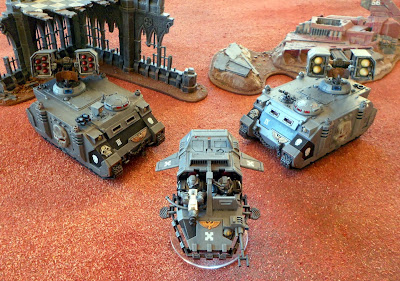 Coming at you from sea still - A small update to my ever growing Relictor Battle Company, another landspeeder which I found in my big pile-o'-to-do box, I intended this for a Apocalypse Suppression Squadron when Apoc came out, so finally I had this completed in January! Now I just have to go find the rules somewhere as it is not in the latest Apoc edition... basically the Landspeeder acts as a spotter and if has LOS, the Whirlwinds don't count as firing indirectly - or something along those lines. Anyway, one can never have too many anti-tank fast options for 40K. 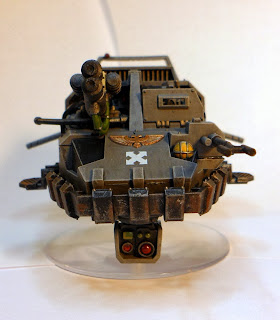 The frontal view shows the underslung sensor package, this is the Marine Sensor from the Apoc Command Upgrade Sprue. And because the formation can be any type of Landspeeder, I opted for a basic MM armed one so I could field in a normal game of 40K when points were tight. 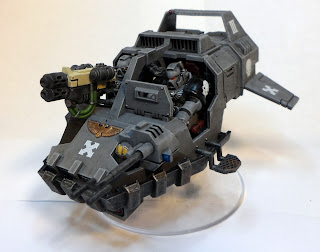 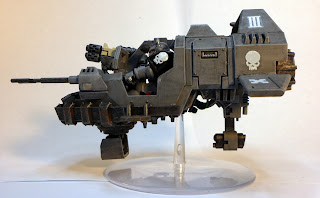 The tail fin has the numeral III as it is the third Landspeeder I have done, so all three can operate as a Squadron if wanted. 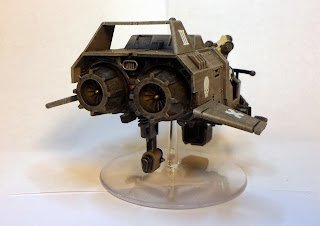 The rear thrusters of the landspeeder show a red and blue 'light', just the same as the others and the same as any Marine Backpack or Terminator waist in the army so far, a visual link to the rest of the force. Grab a mini and look - see bet you didn't even notice they were there! 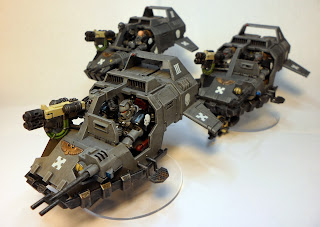 Finally, a shot of the whole Squadron together - that must be able to toast a Landraider or Sicaran Battletank or two...
Posted by Siph_Horridus 1 comment: