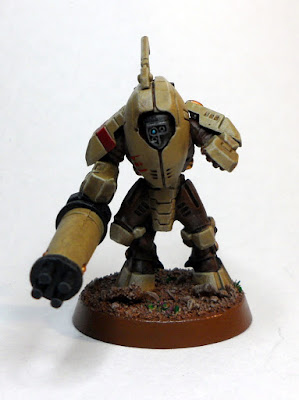 As GW was selling some great value New Army bundles, I bought a Tau one along with several other kits and the Damocles Infiltration Cadre. The scheme being tested here was meant to be the Stealth Suit version of more camouflage version of the Vior'la Sept White and Red, however, I liked the Zandri Dust colour so much, I will do the whole lot in this colour. A few units may receive the White and Red however the Codex states that the red markings are Vior'la, the armour plate may be coloured wherever the Sept is fighting, green in jungle worlds, grey in Urban zones, so the Bone/Brown colours suit my terrain and colour of the earth - Calthan Brown (Mournfang Brown). 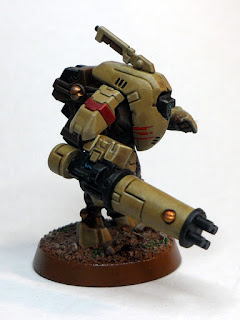 I chose to do the 'metallics' black and grey as a departure from my normal SM Leadblecher, setting these Tau apart from human technology and copied the gold gyros from the GW normal to add spot colour to an otherwise 'drab' colour palette. The touch of red Vior'la Sept marking lifts the scheme too. Blue energy also emanates from lenses and energy couplings/vents etc. 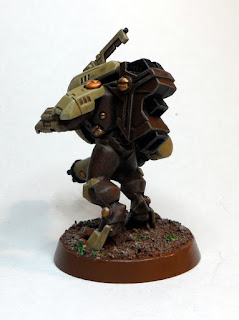 The fatigues can be base coated with Mournfang Brown spray and the vehicles Zandri Dust to match the armour, now GW has decided to produce spray Zandri Dust once again. I was going to do the 'back pack' Zandri dust, but as these are stealth teams, they will remain brown. The base is finished as my previous bases, Calthan Brown, Kommando Khaki/Ushabti Bone drybrush, linking in the camouflage scheme to the environment nicely as I have used both those colours as line highlights.

Thanks for dropping in, cheers, Siph.