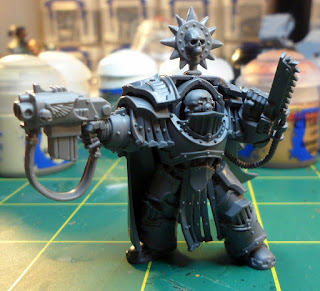 Hello Readers and Titan Enginseers, I thought I'd have a break from the massive Warlord scale hobby and do some tinkering with the Horus Heresy Betrayal At Calth (BaC) box miniatures, now, I have enough 40K to get on with and paint more Relictors without starting a HH Legion as well but the BaC box does give a great addition to my forces and the game can still be played using Relictors!

Lord Halfpenny suggested that the Captain Aethon in BaC could be used for a character found in Forgeworld's IA9 Badab War Pt1, Captain Mordaci Blaylock - ideal as he is armed with Storm Bolter and Chainfist called Foe Ripper.

I removed the Combi-Melta and added a modern '40k' era Storm Bolter and a Iron Halo and done. Captain Mordaci Blaylock - The BaC Captain is an ideal miniature for this Character of renown, has blinged up Termie Armour and a cloak, his special rules also make all Terminator Squads Scoring Units - in 7th we (weemen) interpret that as Obj Sec as everyone can score these days. 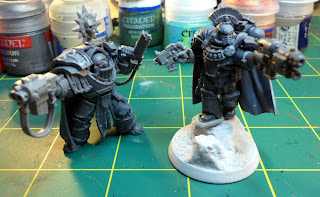 I then set about thinking what to do with the Word Bearer's Chaplain Kurtha Sedd, well a nice addition of a Combi-Grav and Bolt Pistol in place of the Crozius and we have a Sternguard Sergeant, or Captain as I please. I carefully removed the hand holding the long Crozius so the wrist guard is not damaged and the oversized Crozius and gauntlet can be used in another conversion later if needed. I have enough Chaplains at the moment. 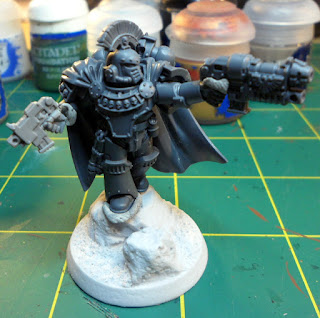 The base was from Secret Weapon Miniatures. Suited his close together feet and gives him some 'character' height. Just held together with sticky putty for ease of painting in sub-assemblies.