Slow progress on a couple of projects, the Reaver is coming along, and the plague toads are about complete also. I've also started working on a WIP conversion - Abaddon, based on the Horus model. 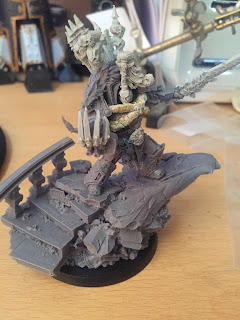 I've taken the key elements from the fine cast version of Abaddon and added them to the Forge World model, The moment I saw the Horus model I knew I wanted to try to do this conversion- There was always that thought that Abaddon was a clone of Horus - so why not build on that! I've changed the left hand weapon so that its the daemon sword rather than the maul - which was quite a straight forward conversion. The model then had the two skull racks added, these were cut to fit in with the curve of the wolf carcass. I've used the original head which fits in perfectly with the model. 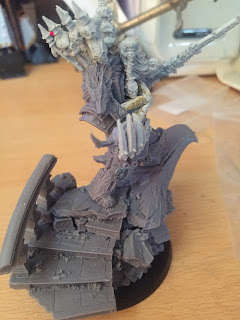 I've tried to sculpt the chest piece, with the 4 pipes that run into a skull, these I intend to work on a little more as this was my first go and sculpting rather than filing. Also added was the chaos symbol which was cut from the fine cast model and filed to fit. 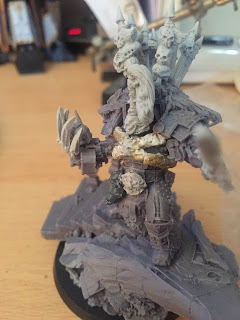 And finally the claw, I've taken the claws from the fine cast model, and swapped them with the original Horus claws- these are slightly bigger, I separated them as I wanted to curve them around the space marine head that is in his hand- as if Abaddon is about to crush it.. Next thing will be to swap the thumb claw, and have it crushing the helmet also. The model will also have the cape from the original model which is left off for painting.

I am yet to decide on the base, whether to keep this one, or to build a base of skulls etc. for him to be standing on.