Hi Everyone, thanks for dropping by!

I wanted to be able to change weapons, as I'd like to have the options to swap out the configuration depending upon what I'm facing. I think the Laser Blaster will be one that is used often, however, I still like the ability to swap them out. I decided to go for a nut and screw solution, rather than magnets. I felt it was the simpler option than cutting the shoulder joint to position the magnet. 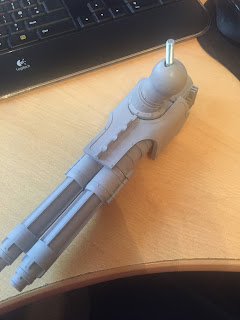 First think I did was to construct the weapon, then once I was happy with the direction it was to be pointing in- having the Reaver 'dry' fitted together, (leaning against the wall to prevent it falling!) and holding the gun until I was happy with the position- the next step was to mark on the gun/shoulder the point so that I knew how to position the weapon/.shoulder when it came to glue it, but also I marked the ball of the shoulder going through the shoulder support so that I knew where to drill the screw. 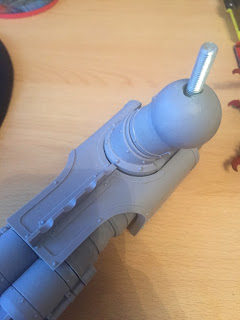 With this point I then put the shoulder joint into a vice and bore a hole for the screw to sit in snugly. Once I'd got a hole in the ball- I then proceeded to fill the hole half way with JB weld- then i pushed the screw into the hole- leaving it for 24 hours to set.

Below are a couple of images of the screw going into the shoulder support- and then secured into place with the nut and washer. I used a washer as I plan to magnetise the shoulder guard to secure it into place. 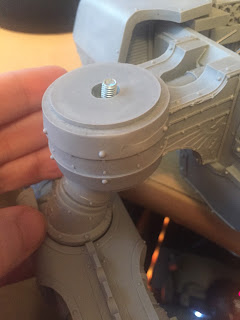 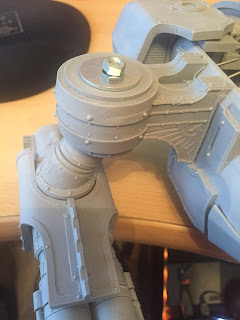 The shoulder guard had to have a hole drilled out to go over the nut, you can see in the pictures its a good fit now. 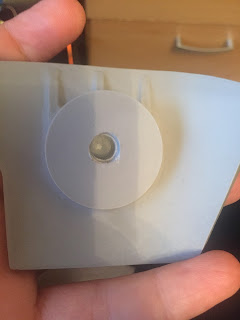 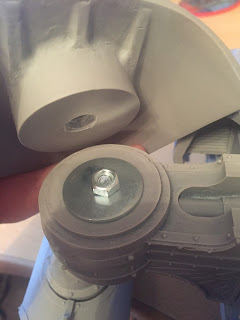 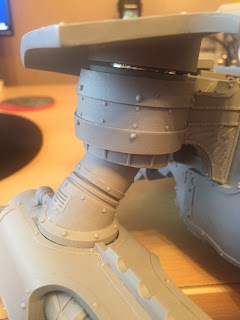 Which weapon will be next? come back next week to see! I'll post a pick with both weapons in position.

Thanks for swinging by!
Posted by Lord TITANium Halfpenny