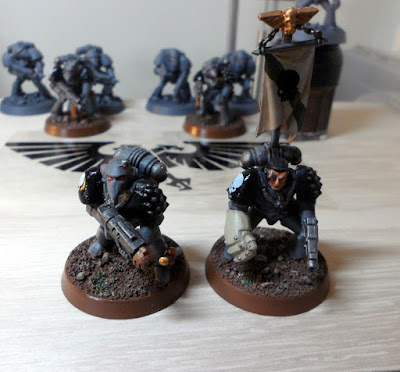 Hello Readers, I am continuing the progress of the RTB01 Tactical Squad I have pledged to get complete during February, in the Squaduary Challenge. Two more done, 6 more to go.

For those who might be wondering what Squaduary is, its all about building and painting a squad in February and is a hobby related event being run by Stepping Between Games. A great way to get motivated to paint some of those miniatures lurking in the cupboard of doom To-Do pile. 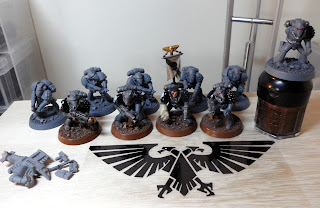 Here is the squad so far, finished the next two members of the squad now, both with a little character. The Grav Gun wielding RTB01 (I know! Awesome huh?) is armed with an alternative Gravity Gun from the 3rd Party company Spellcrow. Official Grav Guns are going for about £6 each on ebay, for about that, you can get 4! (5.80 Euro plus PnP depending if you live on this side of the pond...).

The other mini I completed this week was the Sergeant, a Power Fist wielding Veteran with a FW Bolt Pistol from the SM Character Upgrade set. The Power Fist is the original RTB01 set. The banner is made from an old metal pole (I think a SW Character) from by bitz box and a banner type bit I think from the Black Templars Vehicle Upgrade set.
Posted by Siph_Horridus