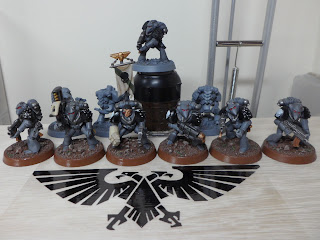 Hi Readers, thanks for dropping by and checking out my progress. So, a little more done this week, two more Marines finished and a third at the highlighting stage. That's now over the halfway mark, 6 finished, 4 to go. Should have these all finished and showcased by the end of the month, easy. Thanks Squaduary, great motivation from reading other participants progress and seeing their squads come together.

For those who might be wondering what Squaduary is, its all about building and painting a squad in February and is a hobby related event being run by Stepping Between Games. A great way to get motivated to paint some of those miniatures lurking in the cupboard of doom To-Do pile. 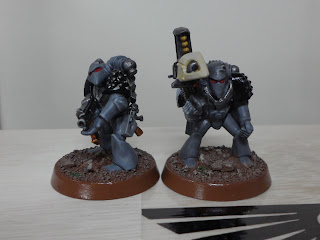 Here's a close up of the newest members to this RTB01 squad, the old school Missile Launcher and a Bolter marine. I added a Bolt Pistol to the leg of the Bolter marine, and some spare missiles to the heavy weapons trooper. Missile Launchers are very meh... at least in my battles, but the rule of cool won for this squad, I had the bits so he had to have one. 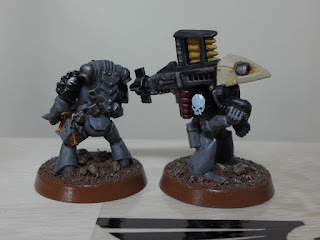 Right, that's any tricky bits now completed, just Bolter armed marines left. It's a shame that when these were glued together half a tube of glue was over-used on each marine! They have needed a lot of filing and smoothing to get to this stage, but I think they look quite passable.

Cheers for stopping by, Siph.
Posted by Siph_Horridus