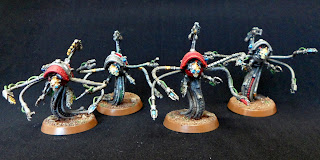 Hello Readers, thanks for dropping by. Well, it seems I wasn't quite done with the Mechanicum units just yet, I forgot I had these... the Scyllax Guardian-Automata Covenant. I bought these ages ago with the view of using them as SM Close Combat Servitors, however now I have a Mechanicum force and hopefully GW will release the 40K rules for these, I may just use them as Scyllax. 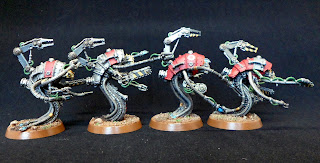 In 30K these are 2A, plus one for Enhanced Array, so 3A, 4A on the charge, S4 T5 Automata which have Rad Furnaces reducing the enemy to -1 Toughness, close combat bodyguard guardians. The attack is only AP5, but the attacks can be swapped out for a 'dismemberment' attack instead, so that hits at S7 AP2 at Initiative 1 instead. They are also relentless and have two Wounds - they can be outfitted with ranged weapons and some heavy ones too. I kept them CC orientated. 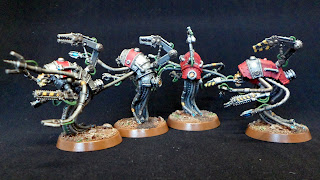 The squad size can be increased to 16 and they can have a Triaros Armoured Conveyor as a dedicated transport. 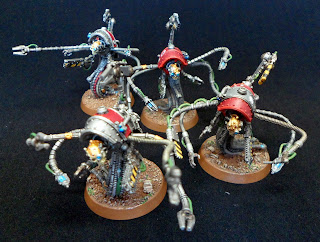 I quite like the slug-like nature of these and I painted a slime/oil trail behind them. They will make cool CCW Servitors and hopefully a Mechanicum unit in the future. Only one more unit left for the Mechanicum forces I have, I also forgot I had a squad of jump-pack Ursarax I picked up at Gamesday (WarhammerFest), nasty buggers, Lightning Claw or Power Fist wielding 3W Jump-Pack nastiness.

Thanks for reading, cheers, Siph.
Posted by Siph_Horridus