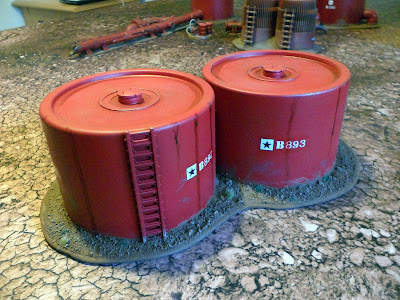 Hello all, thanks for dropping by, I've finally finished another set of Fuel Storage Tanks made from Office Supplies trash, two CDROM stacks packaging. I had a larger one finished earlier (HERE) which blocks LOS for Imperial Knights, LOS blocking terrain is important in games of 40K. 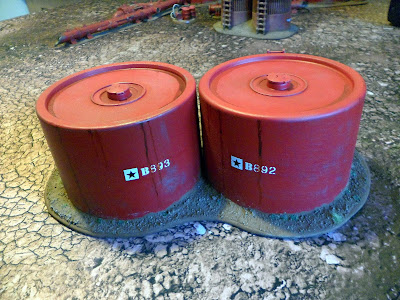 These were decorated with Rhino top hatches, a Ladder from AdMech themed terrain and based on 3mm Hardboard with sand and PVA (Fiberboard and Elmers Glue). The streaks were some watered down Chesnut Ink and the decals from the Imperial Guard Vehicles sheet. 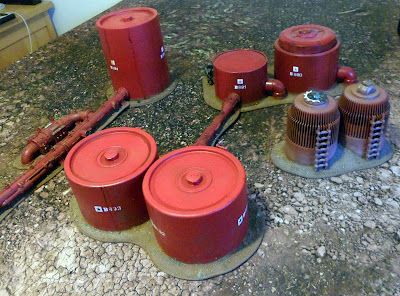 Now I have quite a Promethium Fuel refinery storage yard for nice thematic games, fighting over fuel supplies and what not. The Power Generators were also DIY terrain made from Noodle PotShots! 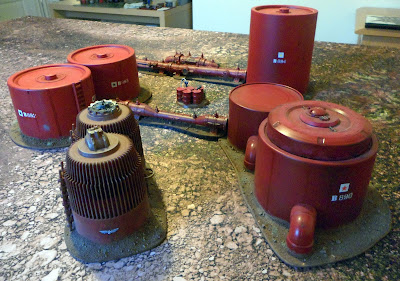 Terrain is certainly the third army and adds so much to the game experience and as you can see, doesn't have to cost the earth and is easily and quickly painted to look effective - go on, treat yourself this crimbo and re-purpose something that would otherwise head to landfill! Up-cycle into a terrain piece to fight over ;)