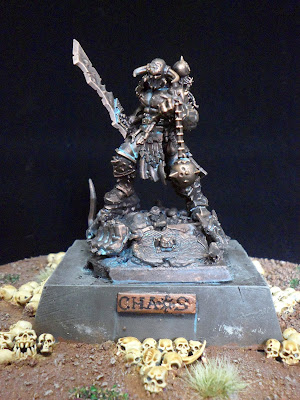 Hi all, thanks for dropping by. Hopefully you are lucky enough to be gearing up to the Christmas/Holidays season if you observe that hokey religion (False Gods, there is only the cold hard Imperial Truth...) Anyway, I did a spot of cleaning up the painting desk and found the Chaos miniature Slaughterpriest with Hackblade and Wrath-Hammer RRP £18 that was given out FREE with White Dwarf a long time ago! So, I used him for some scatter terrain. I give you "Chas" the Impaler! Well, it does look a bit like 'Chas' in the name plate! 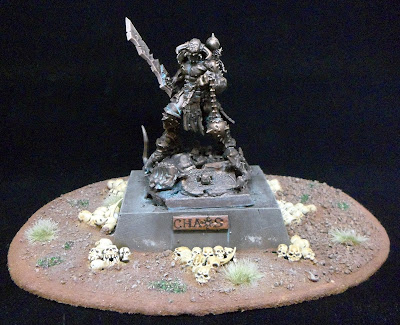 I added a damaged old square base to a pile of bits I had from a second-hand Canoptek Scarabs base I had not used, I had put the Scarabs on a plain round 40mm base. I attached the square base to a concrete plinth made from a FW resin gate cast waste. On to which I added the Chaos miniature and added a few skulls etc around his feet. 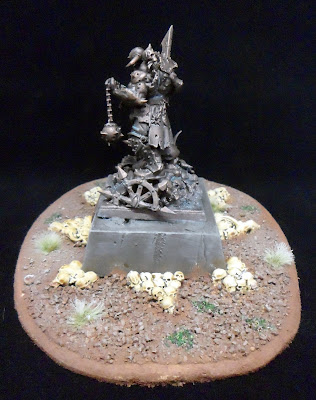 I added a spare Chaos icon, and more skulls from the Citadel Skulls Box in a eight-pointed star pattern around the plinth. Then the sand and PVA glue was added and sealed before painting continued. 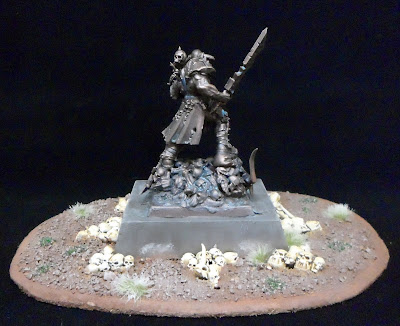 The brass was Warplock Bronze, highlighted Balthasar Gold, washed Agrax and light drybrushed with Fulgurite Copper and recess glazed with Nihilakh Oxide for an aged look. The plinth was Stormvermin Fur spray and drybrushed Karak Stone, and finally the Skulls were basecoated Wraithbone and contrast painted Skeleton Horde (love that paint!) 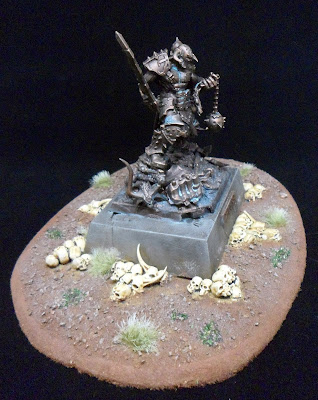 The base was finished with Mournfang Brown, Karak Stone and Ushabti Bone with tufts and flock added for colour - The base can act as a diabolical cover save or just as scatter terrain, maybe only chaos forces will benefit from cover and Imperial Units within 6in have a -1LD modifier... thats the joy of terrain, it makes the battle look and feel better and you can add a narrative.

Terrain is the third army on the table! Check out my TERRAIN for ideas and quick and easy wins.