Hello Tech Adepts and all, I've got my latest squad ready for the table top and now completed my Kill Team set with the previously posted Techpriest Manipulus and the Ryza Ruins great additions to the tabletop. The final set from the box was the squad of Sicarians, I chose to construct and paint these as Sicarian Infiltrators as I already have a squad of Ruststalkers. 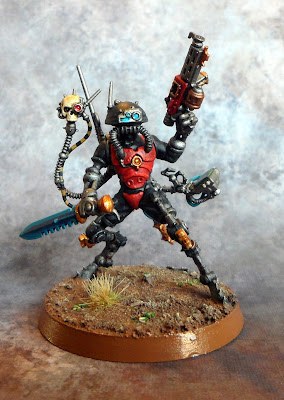 The Sicarian Infiltrators Princeps is armed like the rest of the squad with Power Swords and Stubcarbines, meaning a hail of shots (Pistol 3, 18in) at short range and in combat plus the Power Armour defeating Power Swords (-3AP). The alternative was Flechette Blasters (S3, Pistol 5) and Taser Goads but the lack of AP for the Taser Goads (but do explode on sixes for 3 hits) doesn't outweigh the ability to reduce the save like the Power Sword gives you. Infiltrate, two attacks base and an extra one for the Princeps, the Power Swords should dent a Space Marine squad in the backfield - look out Devastators or Hellblasters. 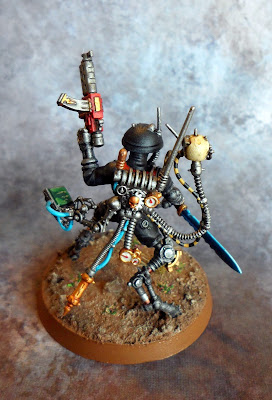 I chose to forego the cloak to mark him out as the Princeps, instead rely on the extra gubbins on his back pack and the nice gold cog knee adornments. These are stripped down, stealthy operatives so the black tunics and dull metals get that across, but being 40K you have so have some ostentatious decorations :) 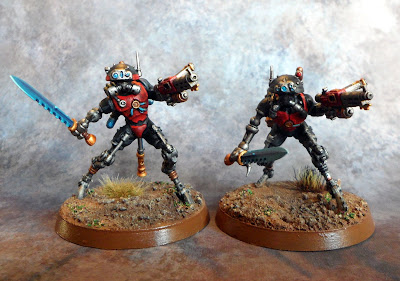 The rest of the infiltrators follow the same looks, and I have trimmed down the aerials and gubbins on the back packs to give a more streamlined covert outline - keeping the bling power sword hilts and incense censers. 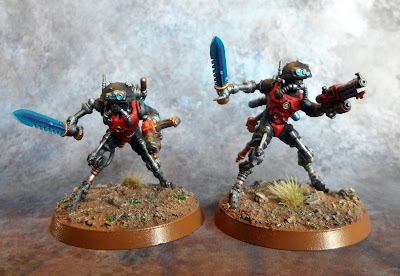 I love these sculpts, with the replacement legs having an extra joint or sprung with pistons and dampeners, they look like they can travel the 8in movement and account for the 6++ bionics save, not too much weak flesh to damage. 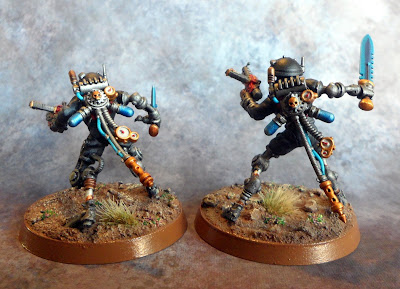 Here are the trimmed down back packs, with some needed colour on the dials and 'plasma flasks' (?) but I used Stormhost Silver and Soulstone Blue for the metallic blue which I like the effect of. 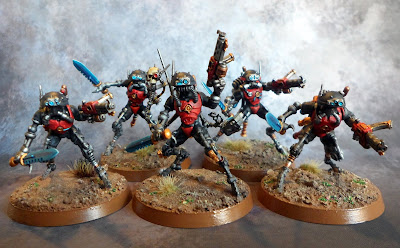 Based in my normal recipe (Mournfang Brown/Karak Stone/Ushabti Bone) and ready to infiltrate a tabletop near soon... I like these dudes and cannot wait to field them soon. Hopefully they give you some ideas if you want some yourself, and thanks for dropping by.