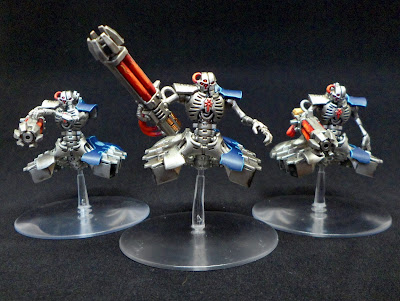 So, after a disastrous battle where a Skyhammer annihilated all my AP3 weaponry, (got to hate Drop Pods of Grav Devastators backed up with podding Grav Centurions... hmmm...Skyhammer should at least account for some of the Drop Pod Assault number Pods!) I thought it was about time to up my Destroyer numbers for a nice bonus when I can field a Destroyer Cult. 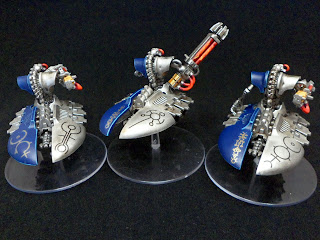 For these final three Destroyers I wanted a slightly different look to the other six, so I tried a half tone scheme with big transfers on the plain metallic side too. I think it looks great. 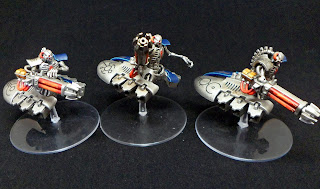 I followed the usual reddish gauss energy colours and the new Fulgurite Copper on the capacitor coils. These finish off the numbers needed for the Destroyer Cult, three squads of three plus the Destroyer Lord. The Cult gains the benefits from the formation (re-roll failed to wound rolls and failed armor penetrations rolls in the shooting phase), combined with re-rolls of 1's to hit because of Preferred Enemy Everything! The only restriction is three units of three Destroyers, one Lord and 0-1 Units of Heavy Destroyers. 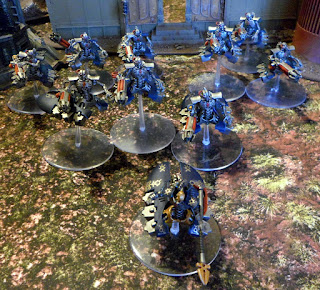 So, the Destroyer Cult has now been completed except for the optional Heavy Destroyers using the converted Heavy Gauss Cannons I made. More Immortals, Tomb Blades for the Reclamation Legion bonuses and some eventual dirty Canoptek Wraiths to keep expanding the Necron force. Cheers, Siph.
Posted by Siph_Horridus