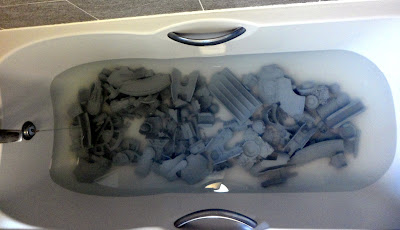 Hello Readers thanks for dropping by. So an update of sorts for Warlord Dominus Victoria of the Legio Astorum. Firstly, how does one clean and de-grease the mould release agent from the resin parts, well, a big bath of warm soapy water, followed by a second bath of Flash Kitchen de-greaser mixed in the bath, and for really stubborn bits, a soak in neat Fairy Power Spray... this stuff melts paint, so don't keep soaking unless you keep an eye on it. It is really good stuff for shifting that mould release agent - just rinse with fresh water and dry on completion. Paint can't adhere to the mould release agent - the really shiny bits of the resin that feel greasy to the touch, so this first step is important.

I use an old toothbrush to scrub every piece, it takes ages, but preparation is key. Without the cleaning process, your painting will rub straight off... 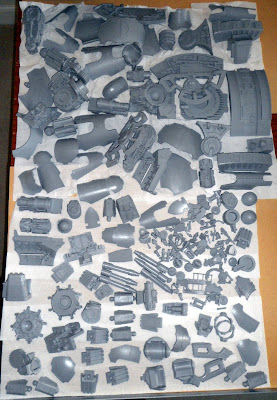 What does a Warlord Body with Head and Carapace Weapons look like.... well before construction like this! This is a few hours of filing and sanding and cutting with a hobby razor saw to get the excess vents off and sand the pieces ready for construction. 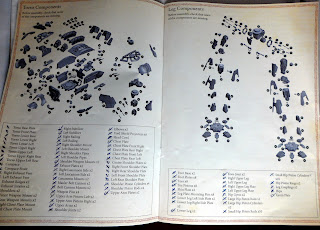 I mustered all the bits against the now-in-technicolour instructions and made sure all the bits were present, not too warped and intact. I am pleased to say only one or two of the largest longest pieces needed some hot water bending, and all were present and intact - FW quality control must have improved. 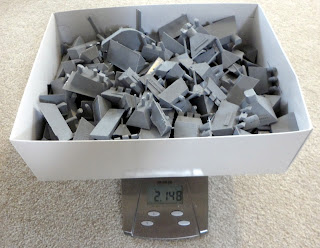 And if you wondered what offcuts you produce, well, over 2KG worth of vents and sprue! Blimey. Just remember when working with resin, usea dust mask when sawing or filing, resin dust may be harmful if breathed in. Follow the advise given on the Forge World website. I have a selection of tools and clamps I will be using, I'm sure there will be more (coathanger is for steel pins - hacksaw not pictured to cut this!, see more already!) 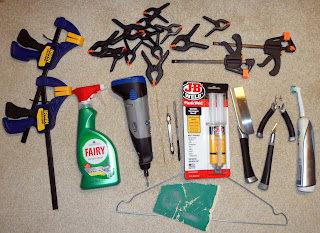 Anyway, some progress, even if it is all preparation work. Hope this helps someone.

And if anyone was wondering how I come up with the Imperial High Gothic sounding names, Google Translate Latin helps out a lot, but their are High Gothic name gererators out there too for SM and Characters.. I was thinking along the lines of Dominus Mortem (Lord of Death), Dominus Exitum (Lord of Doom/Destruction) or Dominus Victoria (Lord of Victory), Dominus being latin for Lord, and it is a WarLORD just as the Warhound Canis Bellum meaning Wolf/Dog/Hound of War. How do they sound to you? Honorum was straight out of the Siege of Vraks book, along with Canis Praetor, paint schemes to match. Dominus Bellum is the name of Lord Halfpenny's Ex-Warlord, now Imperator Titan!