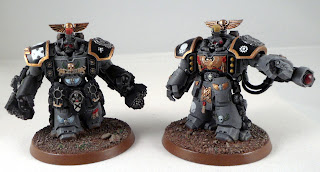 Following the success both these Centurion Sergeants and their squads had at Warhammer World and BlogWars X, I decided to award both an honour marking to celebrate their squads achievements :) 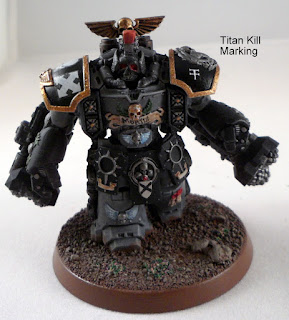 The Assault Centurions charged 6thDegree's Warhound Canis Ferrum on the battlefield at Warhammer World and destroyed him in Close Combat and afterwards, avoided the worst of the Strength D apocalyptic meltdown and survived unscathed to go on to flame the last remaining Ork character who was claiming his home Objective, allowing the nearby Tech Priest Dominus to claim the objective and secure 15VPs. Well Done Squad Mortis - I have fashioned a Titan 'T' from two transfers on the AdMech transfer sheet the Sergeant now wears proudly on his left Shoulder Pauldron. 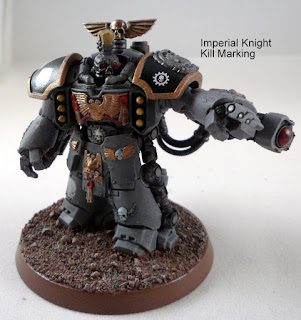 The Devastator Centurions destroyed a wayward Imperial Fist Grav Centurion Squad in their first game at BlogWars X, and in the final game managed to down an Imperial Knight Crusader, stripping 4HPs to help secure the victory for the Imperium. This Squad's Sergeant now proudly wears an Adeptus Mechanicus Cog and Skull honour marking on his left Shoulder Pauldron from the AdMech transfer sheet.

Do you like to 'award' heroic feats for your weemen? Let me know their greatest victories in the comments! Thanks for dropping by.
Posted by Siph_Horridus