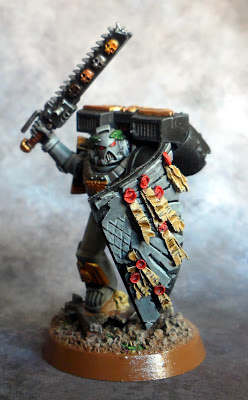 Hello All, thanks for dropping in. I was reading the Codex the other day and watching some WintersSEO on YouTube and the subject of cheap HQ and Teeth of Terra came up - I was looking for a cheap HQ to head up a detachment, and Winters had made a Jump Captain with the Space Marine Relic 'Teeth of Terra' and the Warlord Trait “The Imperium’s Sword” which is a re-rollable charge and relic Chainsword - oh my, I needed one.

Never fear, by new found foray into Primaris Relictors continues however my to-do pile of 'old-Marines' is still huge and will continue to be chipped away at! 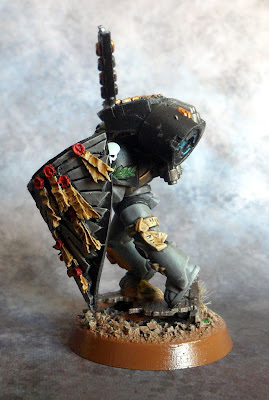 This Captain was made from Assault Squad base, Vanguard Veterans everything else and the shield
from the Limited Edition Forge World MKIII Boarding Marine with Thunderhammer. Game wise he
swaps his Master-crafted Boltgun for the Chainsword Relic, and drops the basic Chainsword for a Storm Shield. 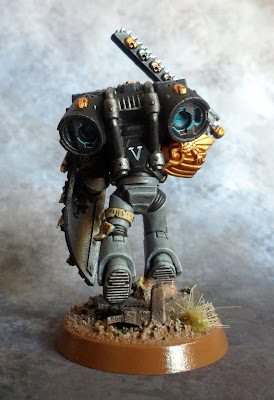 I tried painting the exhaust vents for the Jump Pack, usually these are just drybrushed Leadblecher, but I did similar with the plasma on the Techpriest Manipulus and I like the effect here so much I am
tempted to go back and update my 20 Assault Marines, it's just Sotek Green with a brighter dot of Temple Guard Blue and a line highlight of Temple Guard Blue, simple but effective. 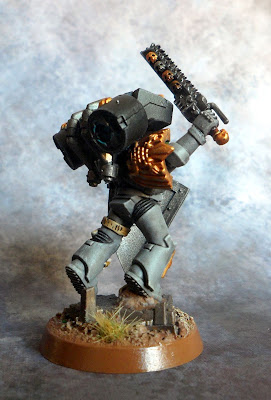 The big gold Pauldron reminds me of 2000AD Judge Dread, but ideal for a Captain, and the relic Chainsword 'Teeth of Terra' was a suitable blinged up Chainsword from the Vanguard Veterans sprues. The base from the newer Assault Squad gives a little more height. 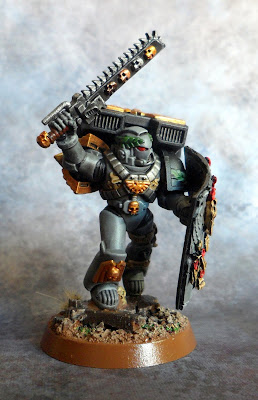 And why - well, this Captain is mobile 12in and 'Fly' and hits like a ton of bricks against most Infantry, no he isn't a 'Smash-Captain' but he is a "Slash Captain" troop and squad killer, watch out castled up Hellblasters, there will be a reckoning - the Storm Shield 3++ ensures he gets across the table in one piece and avoids the Overwatch pain, then a Captain with Warlord Trait has a re-rollable Charge with 4+1 attacks, plus one for charging with Angels of Death Shock Assault rules, three additional for having the relic Chainsword (normally 1 extra for Chainsword), so (4+1+1+3=) 9 attacks on the charge, hitting on 2's, re-rolling 1's for a Captain, Strength 6 (user 4+1+1 for Teeth of Terra Relic and Imperium's Sword Trait), -2AP and 2dmg each. The two damage is the best as that kills Primaris each successful wound. And cheap to boot.

I wouldn't make him the Warlord as he'll be out on his own and will die to the counter-fire once they realise he is so good, I will look forward to unleashing him! Cheers, Siph. (10pts Character)
Posted by Siph_Horridus