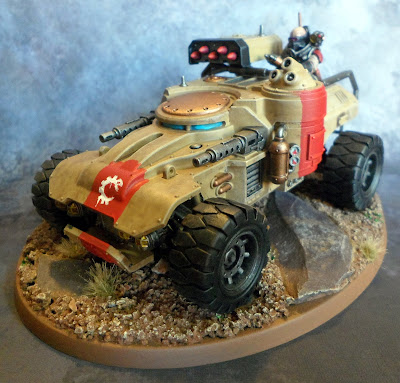 Hello All, thanks for dropping by. One of the most anticipated Units from the Genestealer Cults Codex for me was the small light buggy I had glimpsed in the GW YouTube cartoon reveals - the doubters told me it was just a stylised Goliath Truck however I had faith (in the Four Armed Emperor) that it was a yet unseen vehicle. I give you the Achilles Ridgerunner! 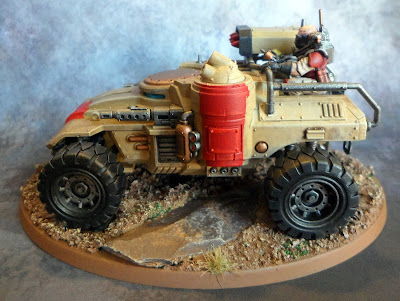 I like the small Humvee-esque profile and the big tyres, but it is smaller in scale - the crew compartment must just be a small cockpit inside, it's quite tiny. And for a small fast (14in) unit option this is a great one I think. 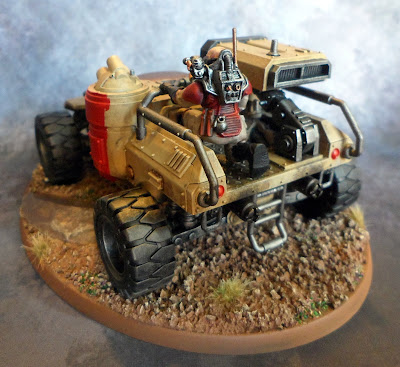 I basecoated the chassis Zandri Dust whilst the weapons, grab rails and ladders and tyres were kept separate and sprayed Leadblecher or Chaos Black. Then Agrax weathering and Karak Stone highlights the main bulk was done, details added and the painted on markings for some interest - my Hive Fleet is Kraken, so Reds and Tans is ideal. The Cultist fatigues echoes this combination too. 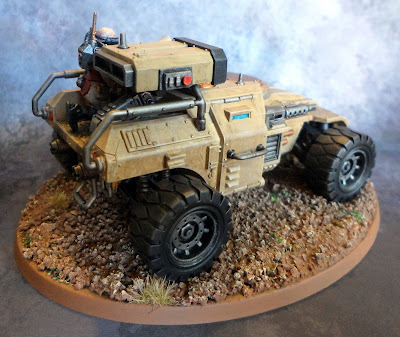 The Missile Launcher was magnetized at the top of the arm so it can be swapped out with the Mining Laser, I left off the Heavy Mortar as I didn't see the appeal of having a fast buggy camped out in the rear stationary - I'd much rather take my chances and fire on the move with the -1 penalty for firing Heavy Weapons, D3 Mining Laser shots hitting on 5+ still has the potential to upset. 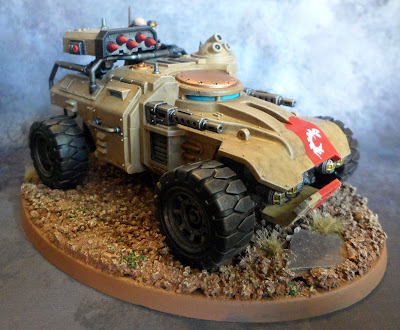 The Ridgerunner also comes with two hull mounted Heavy Stubbers for more shots and I've fitted the turret with a Flare Launcher for effectively a 6+ FNP and the ability to speed up a unit of Cult Bikers an additional 6in Advance. 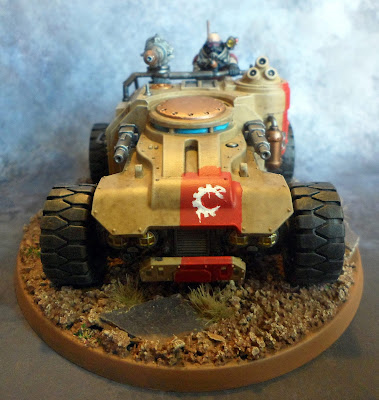 I 'hand painted' the Cult motif on the bonnet with a few paint streaks. And I added a few slate rocks to the base for variation. 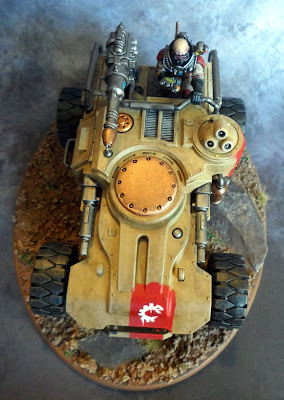 Here you can see the Mining Laser fitted, as a Scout Vehicle you can position this Unit (up to 3) just 9in away from the enemy and if you get first turn, potentially 9x 36in 'Lascannon' shots will upset something! 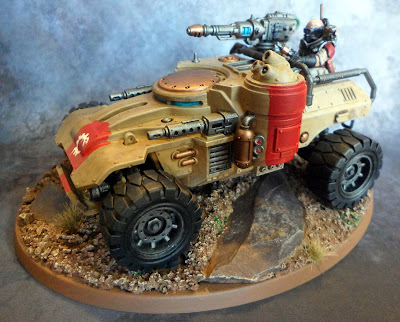 I will have to get a few more for options, with T5 and 8 Wounds they will die quickly even to Bolter Fire, however they are cheap enough to have a few as harassing units. 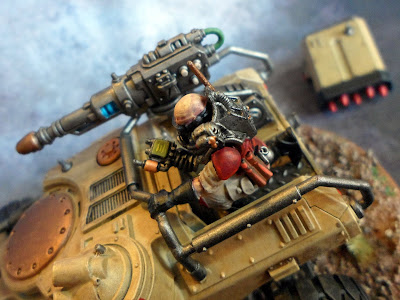 Here you can see the Cultist using his Auspex to guide the Mining Laser - you can also play a Survey Auger and the kit comes with a small Radar Dish instead of the Flare Shield giving Ignores Cover, or a Spotter for an additional 6in range. But I like the idea of frustrating the enemy with a 6+ 'FNP' with the Flare Shield.