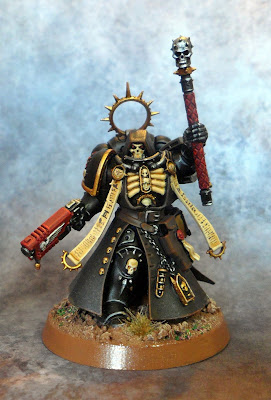 Hello All, so my Relictors are forgiven by Roboute Guilliman and bought into the fold of the Imperium once again and reinforced by Primaris Helix Astartes, but to ensure the purity and the steadfast devotion to the Imperium and not be swayed by insidious Chaos, taint from the Chaotic Relics the Relictors have stored away - Roboute Guilliman deemed it necessary to start with a Chaplain!

Not all my own work, not sure how I came across Black Hand Marines, but I saw in Heretic Deb's Store page that there was a very reasonably priced Primaris Chaplain for sale and with a little tweaking I could make him my own Relictors Chaplain. 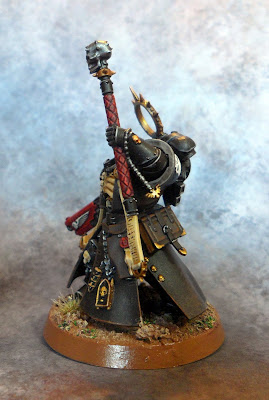 The sculpt itself is a marvelous one, probably my favourite Primaris sculpt to date even, so I had to have one and I loved the leather effect Heretic Deb had achieved so with a few alterations to the base, pauldron, icons and a general tidy up on the metallics and underside I had myself a Primaris Chaplain ready to go. 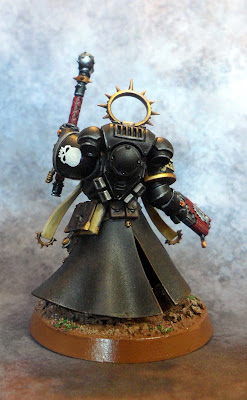 Along with my other Primaris Marines in the works, gone is the glossy black pauldron, replaced with a matt finish Relictors icon and grey border, the Relictors Primaris reinforcements are not indoctrinated into specific Companies, but rather Command is held centrally so the Primaris Marines lack Company specific colours on the shoulder trim, just Relictors grey. When they are attached to a specific Company for actions, they do observe the Command structure as normal, I'm thinking the Primaris Ancient might have a 5th Company Banner as his Astartes Banner. 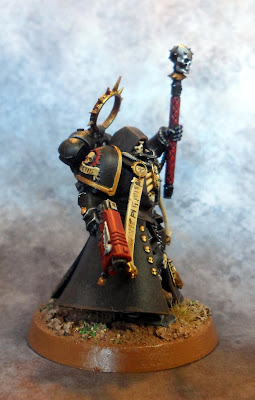 Chaplains are an excellent addition to the Primaris Space Marine forces, with the Litanies on a 3+ meaning you can tailor your character to boost firepower from the rear with the Recitation of Focus or Catechism of Fire or with a Jump Chaplain for example boost the attacks in the Assault phase with Mantra of Strength, Canticle of Hate, Exhortation of Rage or Litany of Hate.

An excellent start to my Primaris forces, some Intercessors in the pipeline, the two Scythes of the Emperor are now proudly wearing the new regalia of Relictors grey and I've even preserved the formal Red colouring for Sergeant helmets in accordance with the Index Astartes - I intend my Primaris reinforcements to be fairly strictly following the edicts laid down by Roboute Guilliman, I don't want to attract the wrath of the Lord of the Imperium and have ourselves Excommunicate once more! (Not to say a few Relictors character traits and decorations won't find its way onto my Primaris forces as I build and paint, got to inject some flavour in all this vanilla...)

Cheers, Siph (5pts - Character but half as not all my own work)
Posted by Siph_Horridus