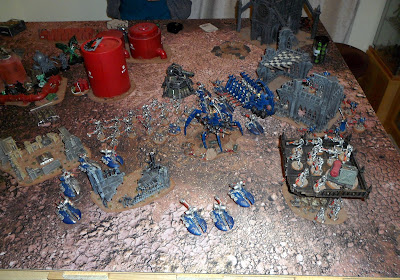 Hello all, not a massively detailed batrep as I generally have a good time in the moment and enjoy the game, but I do take some photos along the way and try to remember the best I can.

It was Capture and Control, 3 objectives with usual secondaries, and scoring at end of game not each turn. We rolled for deployment and got quarters, and it was 1750pts battleforged matched play. 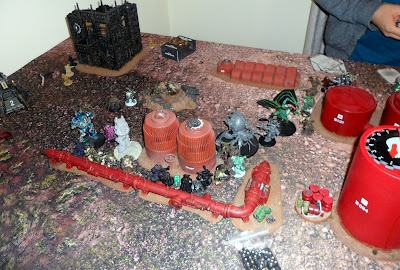 Ben positioned his Rotor Cannon Havocs x2 behind the Promethium Pipeline, CSM squad and two Contemptors with Havoc Launchers and Reaper Assault Cannons with a Chaos Lord. A unit of cultists held the rear objective (in AdMech Building) and a Venomcrawler, Daemon Prince, Sorcerer plus more CSM made up the other flank. Another CSM squad positioned themselves in the backfield crater whilst a unit of 3 plasma Bikers were on the far left flank (top in above pic) and an infiltrated unit of 10 Beserkers were positioned in the cathedral (top right of 1st picture) nearest the Ghost Ark. 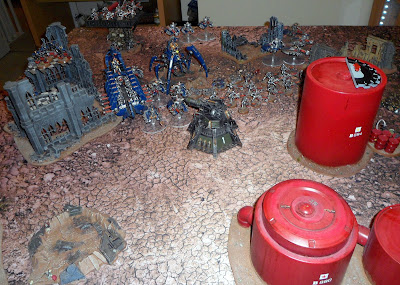 The Necrons were positioned quite far up in the face of the CSM, I saw not too many close combat specialists beyond the Venomcrawler and Prince and the Beserkers distraction - so wanted all my guns (max range 24in) to bear, and knowing Alpha Legion made -1 to hit at over 12in, I wanted to close to 12in rapid fire with a +1AP bonus for Mephrit Dynasty.

I positioned 15 Warriors on my backfield objective, 15 warriors up close to centre, 10 Immortals with the Lord in the chequered ruins, Destroyer Lord and 4 Destroyers (1 Heavy) by the Ghost Ark, the Triarch Stalker had Heavy Gauss Cannons so was happy to sit in a crater -  the Contemptors and Venomcrawler were the only real vehicles and I could see all three. The other two squads of Destroyers (one with a Heavy Destroyer) took the midfield and my left flank, mobility was not an issue. I also had 2x5 bases of Scarabs to tarpit. 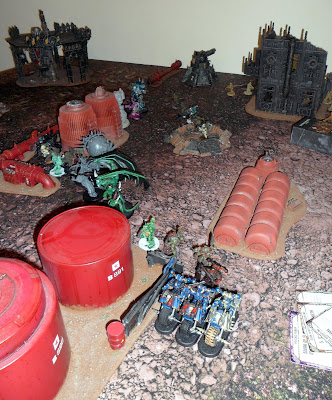 I actually had 1st Turn and Ben failed to seize so it was destroy as much heavy firepower turn one and then speed bump with Scarabs and Warriors. The CSM bikers will be an issue turn 2 and the distraction Beserkers would have to be dealt turn 1 with with guns - plan was to move up to fire everything at short range to double my shots, improve AP and get around the -1 to hit. Ben chose to Go To Ground! 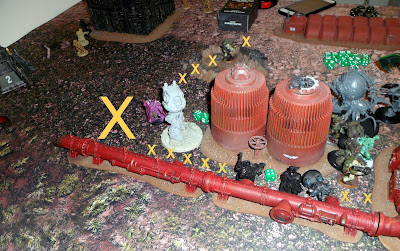 Turn 1 for the Necrons was quite devastating, the Triarch Stalker and 1 Heavy Destroyer managed 5 and 6 wounds on one Contemptor blowing him up to cause 3 mortal wounds on the nearby havocs, Contemptor and 1 on the Lord. That was a great opening salvo! I used Veil of Darkness to move the Immortals and Lord to the far left Gravatic Magnavent Platform and poured fire down into the remaining two Havocs of the wounded squad, killing them with Gauss even with -1 to hit and Gone to Ground and Cover. 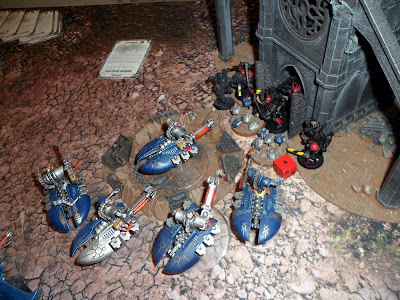 On the other flank, the Destroyers and Scarabs moved up to face the lurking Beserkers, hidden in the church ruins but Gauss Cannons care not for close-combat fury and 5 were cut down and then charged by the Scarabs to prevent them charging the Destroyers. 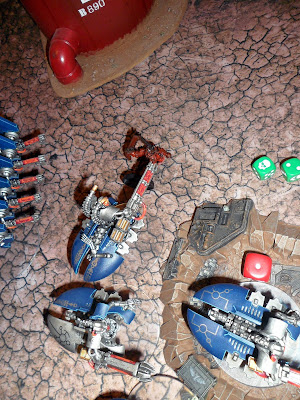 In the Chaos turn, one squad of Destroyers were deleted by massed Havoc fire and buffed up, twice shooting Contemptor fire - ouch that combo really hurts. Elsewhere, large dents were made to the Warrior Squad in the centre, taking down 13 Warriors but at the start of turn 2, eight got back up! The Venomcrawler and Daemon Prince failing to wipe out the squad.

The Chaos Lord charged the Destroyers on the flank by the Beserkers, but a lucky Heavy Gauss Cannon overwatch to the face saw him fall without throwing a punch! The nearby Beserkers chewed through the Scarabs. 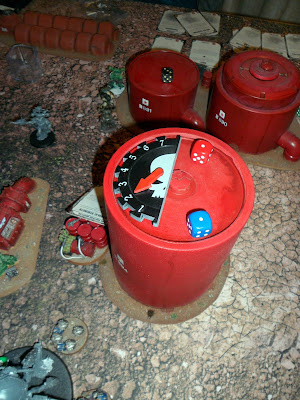 At the start of Turn 2 it was 1 VP each for First Strike. 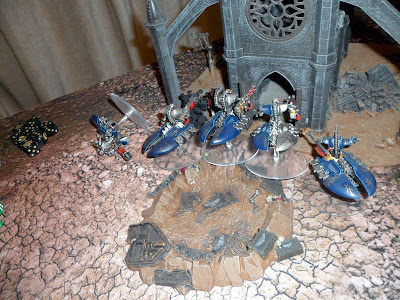 The Destroyer Lord and the squad of Destroyers shot and then charged the remaining few Beserkers. 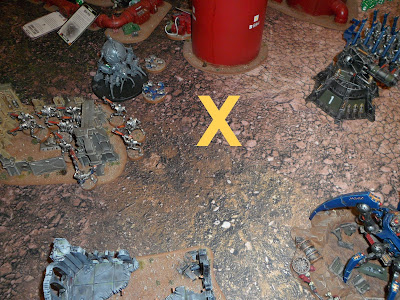 In the centre the other scarabs slowed down the Venomcrawler and the big guns targeted the Daemon Prince Warlord, taking him down. But being Alpha Legion, the Warlord changed and now the Sorcerer was the Warlord. 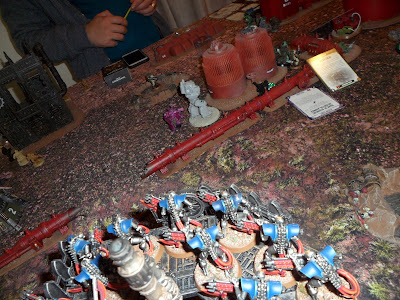 The Veil of Darkness warp-jumped Immortals and Lord ploughed fire into the rear of the Chaos lines, but failed to take down the Contemptor. In return the Contemptor buffed again with stratagems and psychic shennanigans tore through the Immortals taking down 9 of 10... but I spent a CP to auto pass morale and 5 stood back up at the start of Turn 3. Once again, failing to wipe the re-animation squads was Chaos' undoing. 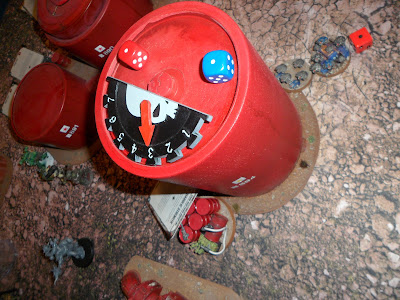 At the start of Turn 3 it was still 1VP each. Objectives only counted at the end of the game, and the Daemon Prince wasn't the 'real' Warlord. 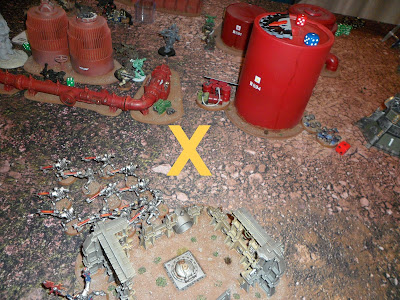 Turn 3 Necrons tore into the Venom Crawler with massed gauss fire and the Triach Stalker Heavy Gauss Cannons, wiping out the beast. 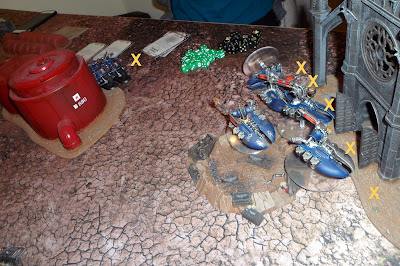 The ongoing combat with the Beserkers and the re-animating Destroyers saw the Destroyers pull down the final Beserkers and some shots from Ghost Ark tore down a Plasma Biker. In return the Plasma Bikers and nearby remaining Havocs destroyed the Ghost Ark, massed low damage weaponry getting past the Quantum Shielding. 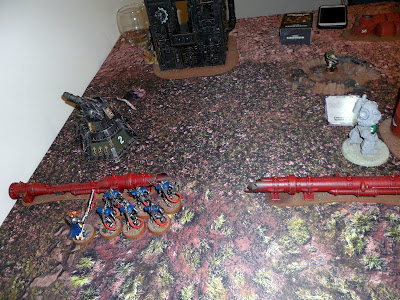 The Lord and re-animated Immortals got in a better position to snipe the remaining Chaos Lord in the rear of the Alpha lines but failed to take him down. The Contemptor did fire at the nearby Warriors but without CP's left, no buffed double shots seriously hampered the damage output and poor rolls and cover saves meant little damage was done. 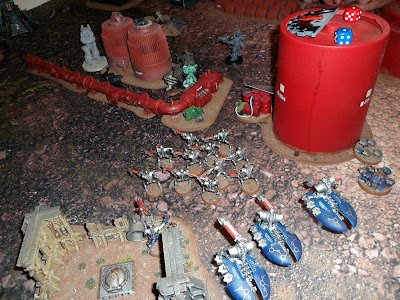 At the start of Turn 4, the Necrons were in a commanding position, in the centre taking the central objective and massing for rapid fire gauss at the improved -2AP would end the nearby Chaos Space Marines, the Destroyers backed these Warriors up. 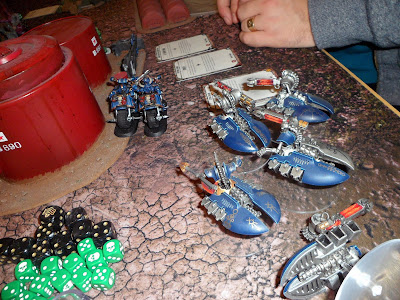 On the flank, the now free Destroyer Lord and Destroyers eyed up the remaining two Plasma Bikes and the heavy guns of Heavy Destroyers and Triach Stalker eyed up the remaining Contemptor whilst the Immortals and Lord closed in on the rear objective held by the Cultists... and with the quick measuring up of his chances, the Alpha Legion knew they would not be able to re-take the centre, stop Linebreaker or dent enough of the re-animating robots so fled the field.

A turn 4 victory for the Necrons - it was getting late, so we didn't play it out. Chaos skulked back to the shadows and the Tomb was arisen!

A great game for both of us, new opponents, new forces for both of us and despite me warning Ben to concentrate fire and wipe re-animating squads, that is ultimately what undid the Chaos - 8 Warriors and 5 Immortals coming back was just dirty! And constantly as Beserkers tore down Destroyers, they popped back up. There was also the unfortunate overwatch casualty of the Chaos Lord and the scenario allowed me to set up and close the Chaos lines to overcome the -1 to hit outside of 12in, and also benefit from +1AP within Rapid Fire range. The best result was we both had a good time.