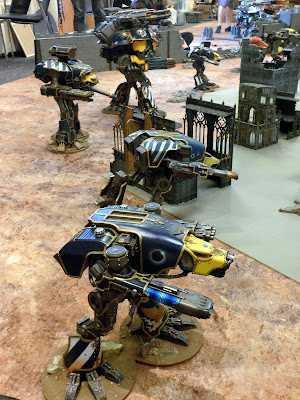 Hello again Titan fans, so Day two at the Titan Owners Club UK Walk in Milton Keynes was broken down into three concurrent battle over the 56ft battlefield. 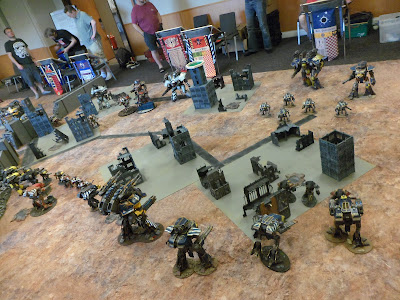 To balance numbers, my Legio Astorum Engines had to flip sides to become traitors for the day, and as I was facing John H's Astorum Engines so I think of it as a 'training exercise'... we faced off over the ruins of the Hive City. 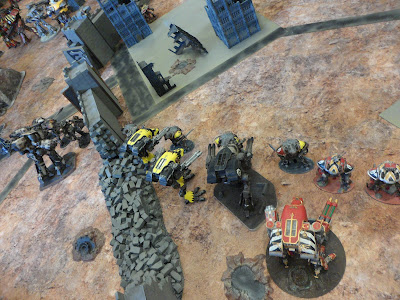 Accompanying my Legio were some traitor Engines and Knight Banners, advancing further into the Hive City. 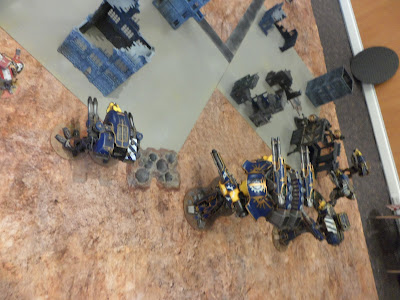 I also got to battle with one of John H's Warhounds armed with Vulcan Mega Bolter and Inferno Cannon. We advanced with Dominus Victoria taking centre stage. 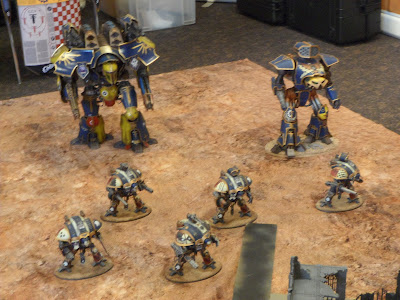 John H's Warlord and Reaver and Knight Vanguard faced me. 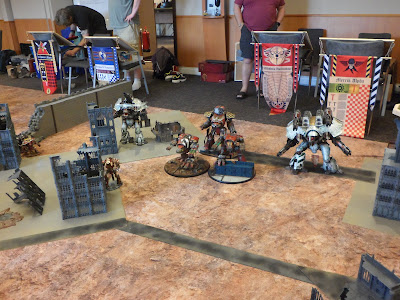 Legio Ignatum and Legio Solaria faced our left flank, once I dealt with John H's Astorum Engines I could swing left and help my team... 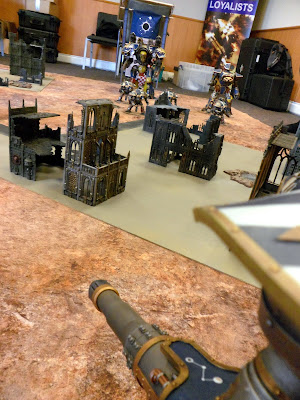 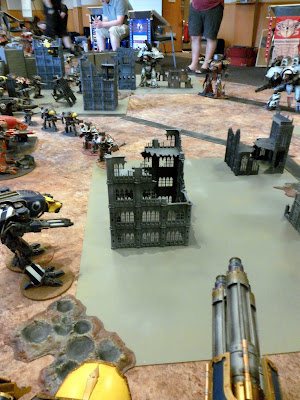 Dominus Victoria spoke and deleted one of the two advancing Loyalist Warhounds, Excidium Rex, the second one was dealt with by the Fureans Warhounds.

My seconded Warhound paired up with Canis Bellum and we stalked on the far right wing towards John H's Reaver. 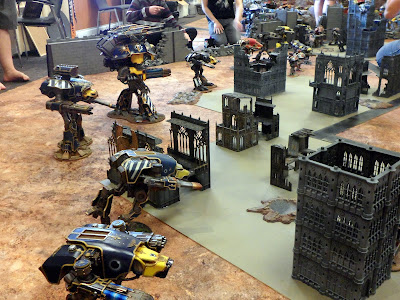 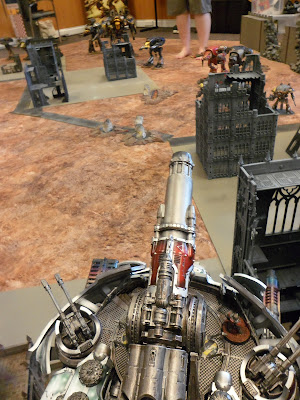 The Solaria Warbringer was a fearsome enemy, taking a heavy toll on my team mates, three large blast marker cannons ensured many Traitor engines were caught in devastating explosions! 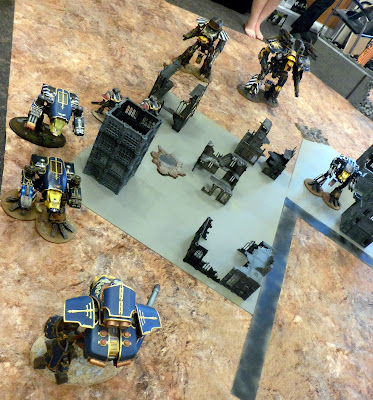 The two Warhounds advanced threatening the Reaver, supported by Warlord and Reaver fire. John H's Reaver voids collapsed under sustained fire and it was the sniping Warhound Canis Praetor with twin Turbolaser Blasters who finishes off Reaver Sir Tyr. 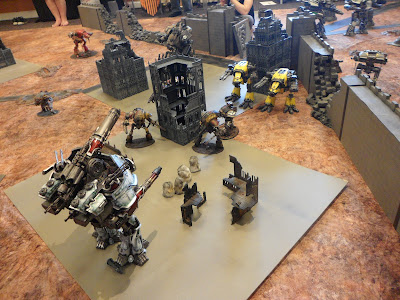 The Warbringer proved a stalwart against the Traitor legions of Knights! 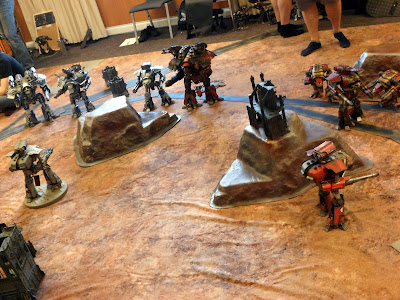 In the central sector in a separate battle the war raged on between Metalica and Gryphonicus versus Tempestus and Mortis. 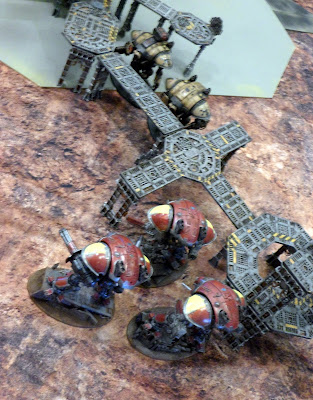 In the furthest Industrial Sector, Legio Crucius faced off against Legio Mortis. 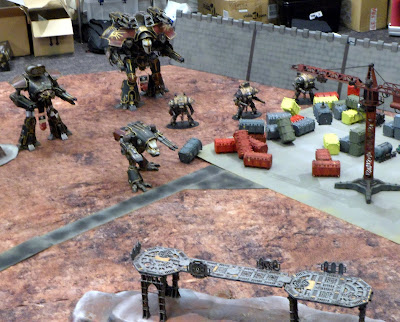 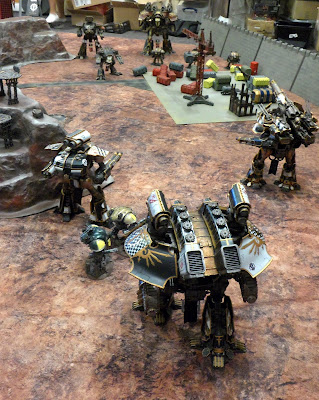 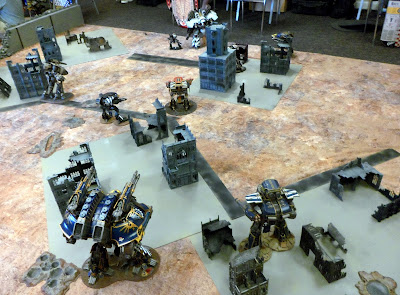 Back in our city sector, Reaver Honorum finished of John H's Warlord Rex Ares, freeing up the Astorum force to swing left towards the remaining Solaria Engines. 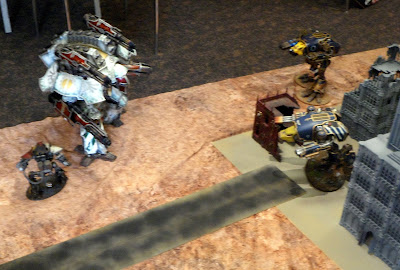 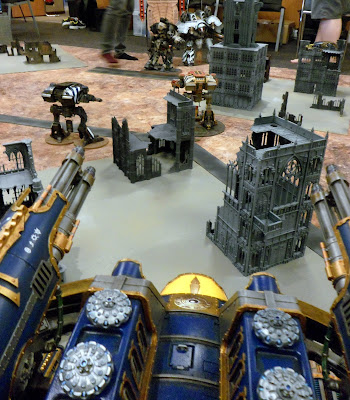 Dominus Victoria gives the killing blow, destroying the Solaria Warlord Unius Exirtius giving the victory to the Traitors in the City Sector (shame on me...) 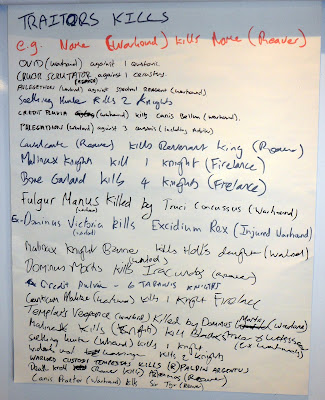 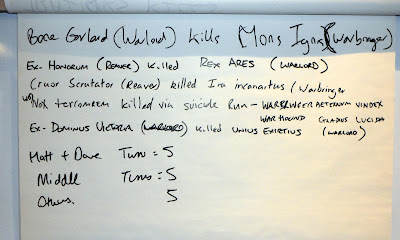 The kills throughout the weekend were recorded by writing them down and shouts of "ENGINE KILL!" by the victorious Princeps, much fun! 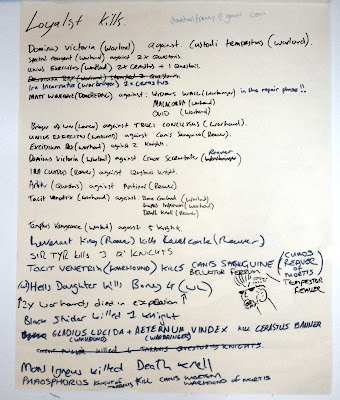 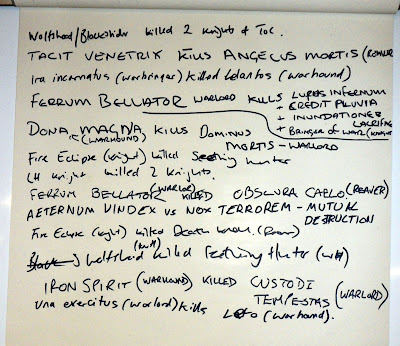 The Loyalist tally was superior giving the weekend Victory to the forces of the Emperor (despite my traitor efforts...) and my own tally of Engine Kills was 3 Warlords, 2 Reavers and a Warhound! 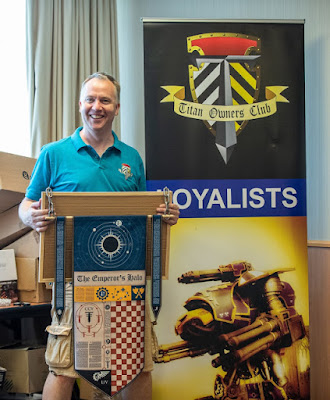 So, a tally on the day of what Engines were battling is now a tradition after a few Walks/Musters: