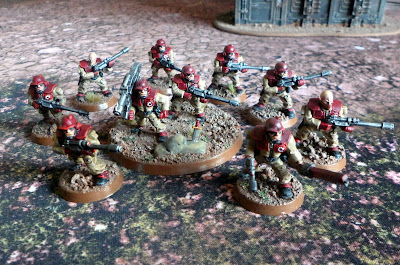 Hi All, thanks for dropping by. I picked up an eBay lot of old school Rogue Trader era Imperial Guard (Astra Militarum) with arms and weapons which was a great find. I sold the spares and with the remaining squad and weapons I made a Brood Brothers Squad with Heavy Weapons Team for my fledgling Genestealer Cult. 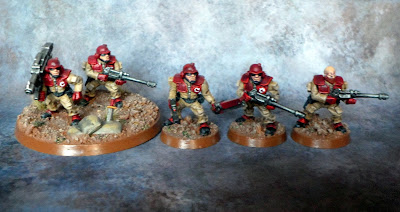 The old figures only came with 25mm slotta bases, so I cut off the foot tab on two of them and mounted on a newer large base. The Heavy Weapon is a Rogue Trader era Lascannon. The Sergeant was armed with a modern Chainsword, I also cut off a few heads and added ones from the Genestealer Cult Upgrade Sprue. 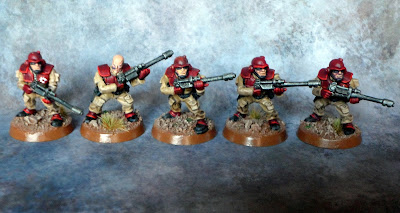 This is the second half of the squad, again one head swap completely changes the way the model looks, all ten have identical sculpts, only the weapons and arms are plastic and vary, plus the two modern head swaps. 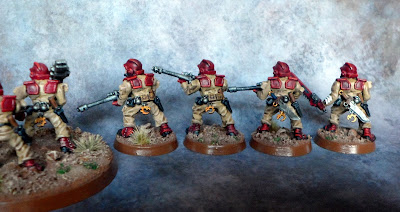 I also added signs of their twisted allegiance to the Four Armed Emperor with Cult Knives from the Genestealer Upgrade Sprue. This is similar to what I did with my ex-Cadian Sqaud too. 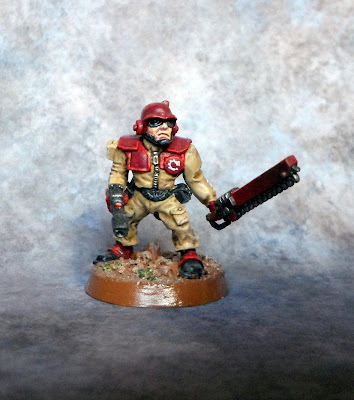 Here is a closer look at the corrupt Sergeant, the arm and chainsword is a Cadian plastics arm whilst the Las Pistol is an original RT era one. I added a Genestealer Icon to the chest badges where the old Imperial Guard used to display Company and Platoon numbers and Colours. 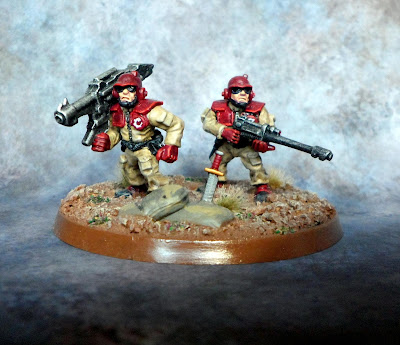 The Heavy Weapons Team with old school Lascannon and modern sand bag. It's quite hard to see that these are both the same metal torso/legs/head metal sculpt. 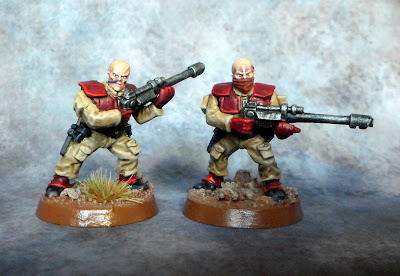 The modern head swaps - it did feel bad chopping up a classic miniature, but the result was these two I am rather pleased with, the angle of the head totally changes the pose of the miniature, again identical metal sculpts. 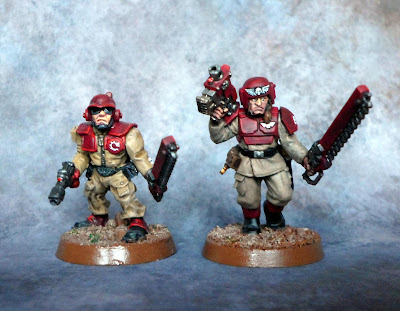 And with comparison to the Cadian Brood Brother Squad I already have, this is both fallen Sergeants. The original squad was called Neophyte Hybrids before the latest Codex changed the Imperial Guard Squads to Brood Brothers, to differentiate between the Hybrid Plastics and the Cadian Plastics. 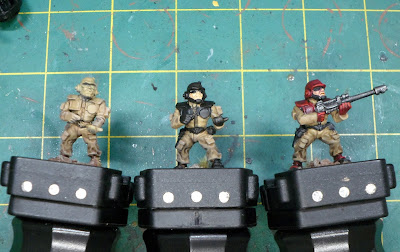 And a quick look-see on the painting process, basecoat of Zandri Dust, washed Agrax then Drybrushed Karak Stone. Then the red areas were blocked in, painted Abaddon Black before Khorne Red with a Nuln Oil wash and Evil Sunz Red highlight. The flesh was Kislev Flesh washed Purple to look more infected/alien.

Thanks for dropping in, Cheers, Siph. (10 painting points)
Posted by Siph_Horridus