I just love the new Space Marine Drop Pod, and it is in my opinion one of best kits around. As Siph discussed, the kit is far larger than expected. It requires painting inside and out.
The original paint up was slightly rushed to get it ready for the first battle with Siph (one of my surprise pieces...) However on returning home I decided to give the pod some extra work. 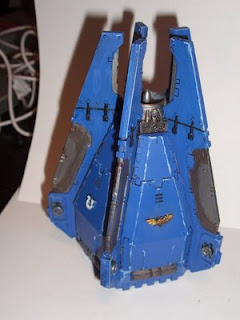 I added a second coat of Ultramarine Blue to the main body of the drop pod, the fins had another coat of Boltgun applied. I also added Boltgun metal to the vents at the bottom of the fins. These areas I felt needed a well used feel. I then applied Tin Bitz to the fins in a circular fashion to achieve the look of a craft that has just gone through the rigours of re-entry. Space Wolves Grey was used as a highlight to the edges. The doors had already had several coats of Boltgun and inks to it, so I added Tin Bitz again, with a Badab Black wash. The chevrons were done using Chaos Black, and Iyanden Darksun. I didn't measure the distances, I used the indentations on the doors to work out where the black should finish and yellow to start. This was then washed with Devlan Mud. 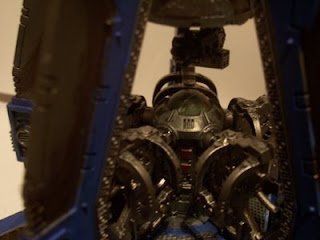 The interior was pretty sound from the initial paint up, however another wash of Badab Black was applied, and red and green buttons added to the harnesses. The centre console is my favourite part of the model, it reminds me of one of my favourite movies as a kid, 'The flight of the navigator', the console in that was similar in design. I've added lines for navigation and several dots for the enemy. I have also added a 'drop pod' shape to indicate the current location, and a square for the final destination.
Posted by Lord TITANium Halfpenny