Hello All, thanks for dropping by in our humble corner of the blogosphere, I have recently finished another squad of 4th Company Devastators that have been cluttering up the painting desk for too long! The Lascannon Devastators were finished in September last year,  and from the same boxes the Grav Cannon Devastators from June 2016! (i said it was too long!) And I still have the Heavy Bolter Squad to do on the painting pile still! 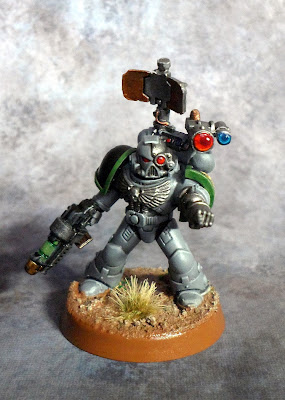 I love the look of the Sergeant, the backpack Signum was actually from the Company Captains set in finecast, I think the actual Captain of the Relics which is cool as we are Relictors! And that particular Captain will be finding himself demoted as a Sergeant of the Heavy Bolter Squad soon. 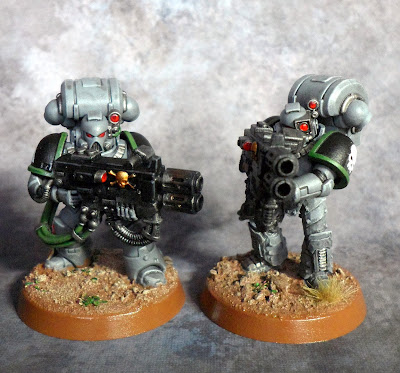 I've used third party bionic legs for one of these troopers, the Multi-Meltas from several boxes of Devastators, and the shoulder Pauldron trim is marked out in the Company colours for 4th Co., green. 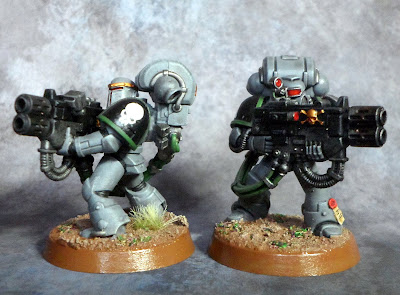 I've used the extra-stabilised Devastator legs throughout these squads, and I chose a MKIII Helmet for one of the troopers as I had it painted and laying about - it was originally for a Veteran before I remembered my Veterans have bone-coloured helmets, so this Devastator gained a relic piece of wargear.

The power cables were in green to match power cables across the entire army, and I marked out the three indicator LEDs on the rear of the powerpacks to signify the level of charge - some 3 green, others 1 green and 2 red. The design of these backpacks really reminds me of Ghostbusters for some reason! 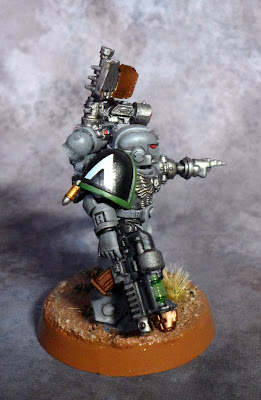 The Sergeant also gained a Combi-Grav as he will find himself in harms way with the short range of the squads guns, and the inevitable 'command-hand' pointing at the next target, I slew the Signum targeters to align with where he is pointing too. His Pauldron displays a Marksmen award Bolt Shell. 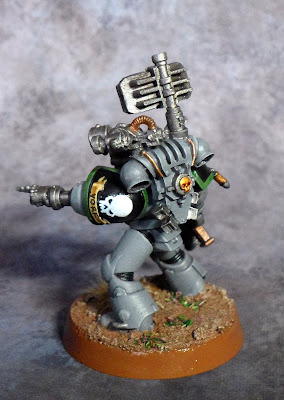 The Sergeant's right Pauldron proudly displays his name and the squad's name "Vorf", a nod to part of my profession meaning 'vertical offshore reference frame' but makes a unique Sergeant's name, Squad Vorf reporting for duty!

Cheers for reading this far, thanks, Siph. (5pts)
Posted by Siph_Horridus