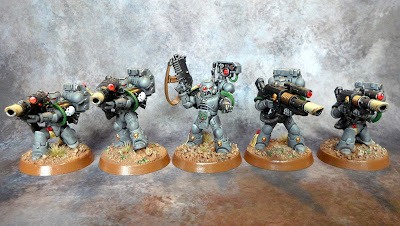 Hello All, thanks for dropping in. It was about time I continued with some of my Space Marine to-do list as it is a long one (just check out the to-do list!) and I have had part built Devastator Squads sitting on my desk to complete since 7th...oh my, two years ago. I managed a squad of Grav Cannon Devastators when they were good, okay OP, now just good. HERE. Now I thought it was time to do some of the other weapons as I had bought 4 boxes to get all the Grav Cannons! 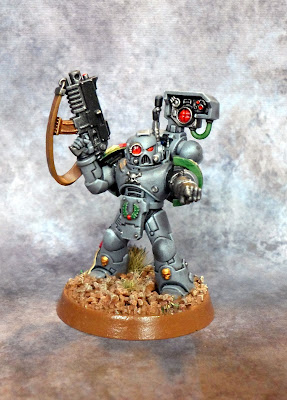 As I had long ago exhausted the ranks of my 5th Company with two full 10 man squads of Devastators already, my expanding forces are made up of the 4th Company, hence the green Company colour trims on his pauldrons. Lascannon Devastators will be sitting back killing tanks from afar, so a basic armed Sergeant with Bolter and Signum - requisite pointy arm - "Kill that there!" 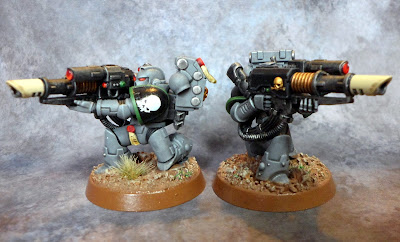 The kneeling support Lascannons, usually associated with Missile Launchers due to the set of legs that came in the old Tactical Squad box, but it makes sense to brace for an accurate shot from distance, the newest Devastator Squad set comes with a set of kneeling legs - all the legs have crenelated wide greaves with in-built stabilizers. 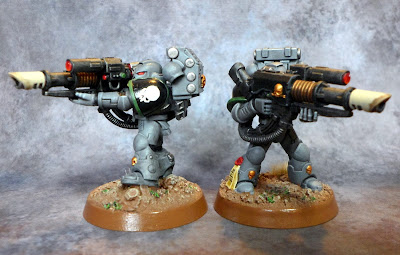 The two standing Lascannon troopers, one with a braced foot on some rubble. I love the look of the Lascannon in general, no idea why it's taken me so long to complete a squad, Lascannons rock in 8th! 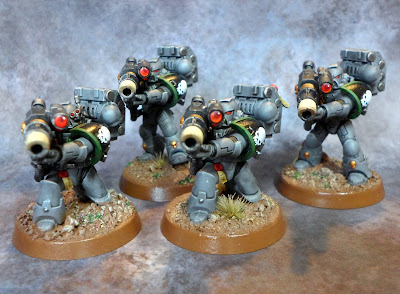 Every Tank Commander's nightmare to come face to face with these as an enemy! 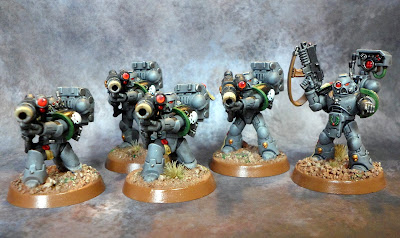 Yes the Sergeant is still pointing, "Vapourise it!" 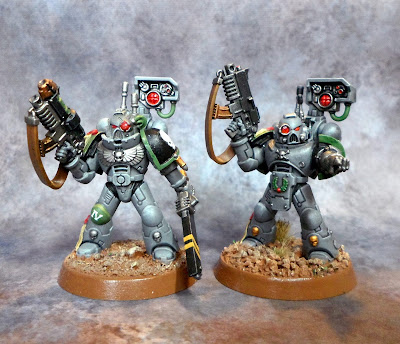 And it was pleasing to see that even after two years break from doing Devastators, okay Oct 2018 I last finished something Relictors grey, but, my painting style and finish is consistent. The Grav Sergeant has more elaborate armaments due to the short range of Grav Cannons, and a well placed few extra Grav shots can't hurt (will hurt!)

Thanks for checking out my latest offering to the painting Gods, must get some more Relictors done and ask GW if I can now have Relictors Primaris as I keep seeing them but the fluff says we are Excommunicate - so something is wrong or changed... cheers, Siph. (5 painting points)
Posted by Siph_Horridus