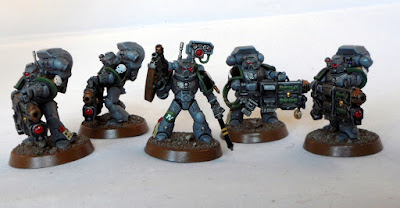 Hello Good Readers, hope you are well. Here is my latest offering, I got these Devastators with Grav Cannons and Grav Amps ready for the massive battle we had at Warhammer World a few weeks ago, with the exception of a few details and the heads, so hot on their success in Imperial Knight slaying, I finished them.

The Sergeant received his Combi-Grav, so with the Grav Cannons and Grav Amps for re-roll, this squad puts out 23 grav shots if stationary (or Relentless in an Skyhammer Annihilation Force) with a damage re-roll of 20 of those for getting those glancing Sixes! Almost guaranteed to kill a Landraider or Termie Squad - but at a cost point premium, this squad costs more than those said targets when fully kitted out. But, in that Skyhammer, this is a great Alpha Strike, otherwise a points sink. When I am not using the Skyhammer, I'll farm out the Grav Cannon marines to various Tactical Squads in games. 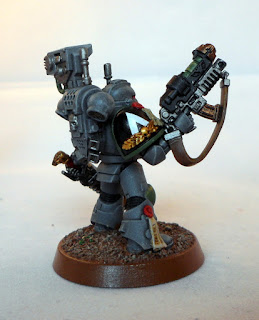 Here's the Sergeant, I like the 4th Company green trims to the pauldrons, a change from the majority of my Relictors 5th Company black trimmed black pads, just seen that I missed the Sergeant's gun casing Aquila, doh, have to quickly fix that. 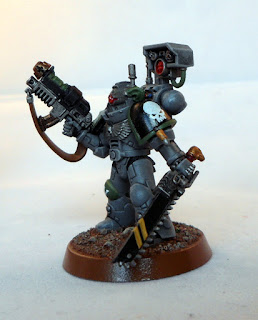 I added two stripes to the Chainsword and a green 4th Company Knee Pad for a touch of colour as the accent colour I usually use on the weapon casings in bone is missing from these Devastators - I was up against the time pressures of getting them ready for Warhammer World, so the bone went - but I like the different scheme - marks them different from the mass of 5th Company marines.

Right, next up for the Relictors painting pile - Bikes, maybe something rather shooty which has been languishing in the closet of doom for years... and a lot more Devastators - my aim is for another Grav Cannon 5-man Squad for an effective Skyhammer Annihilation Force alpha strike, plus I want a squad of 4 Heavy Bolters for the rule of cool - they look awesome - so much dakka. And then maybe some Lascannons, Multi-Meltas... the Devastator box comes with more weapons than you can use, so I had to buy a Tactical Squad just to use the bodies as Devastators!

Thanks for reading.
Posted by Siph_Horridus