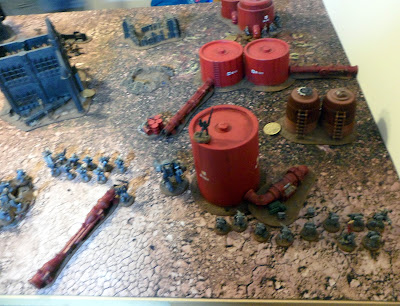 Lord Halfpenny and me had a battle at long last after a gap of several months. I chose my latest editions of Relictors 4th Company as a stand alone force, and Lord Halfpenny chose a soup mix of Custodes, Sisters of Silence and Inquisition and Assassins. An interesting variety of units neither of us were familiar with and a lot of them their first outing in 8th Edition.

This would see the Relictors striking to retrieve a Chaos Artifact beneath the Church, but the Inquisition got word of this and to prevent the strength of the Relictors falling out of favour from Rouboute in these times of great need, turned to the secretive Custodes and Assassins to ensure they stay on the right path. Over Trajorann's own body would the Relictors have this Daemon Weapon. 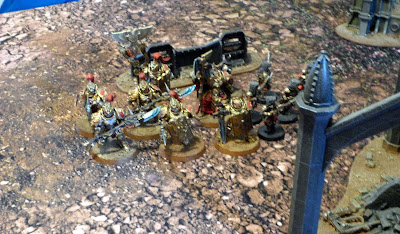 My 4th Company centred around 3x Tactical Squads, a Ven Dread, a Contemptor, Dev Squad, Company Vets with SB/SS and Teeth of Terra Jump Captain, Lieutenant, Apothecary, Company Ancient and a Chaplain and an addition of a Vindicare Assassin as I knew Lord Halfpenny was bringing four operatives!

We deployed Cloak and Shadows, Frontline Assault, Relictors got first turn and Custodes failed to seize. 6 objectives and maelstrom of battle. 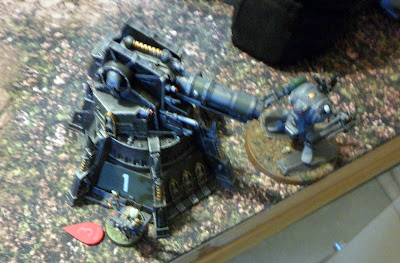 The long range firepower in the first turn was quite ineffective, the -1 to hit the large Custodes and Characters blob meant a few wounds but no casualties except the Contemptor Dreadnought mowing down the 6 Acolytes for First Strike, and even the Venerable Dread failed to get past the Invul save on the approaching Eversor Assassin with its Lascannons - "I mean, what harm could a horde killer do to a mighty Dreadnought?..." The noteable success of the Vindicare striking Trajann Valoris with Headshot taking 4 wounds was fun and made Lord Halfpenny a little more cautious. 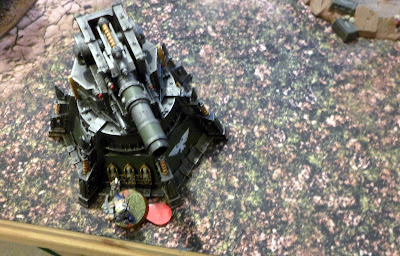 The Custodes all moved forward, to close with the enemy, protected by their superior armour and shields, the Assassins struck out of the shadows - we realised we played their deployment wrong - not infiltrate 9in away but should have been concealed within their own deployment zone or deep strike turn two - however, as much as they will hurt, we had fun and continued... the Eversor landed a lucky Melta Bomb on the Venerable scoring six wounds! Then got into combat with the mighty Ancient and cleaved him into two... ouch. The Callidus struck out at the opposite end of the battle at a Tactical Squad dragging down 5 marines and taking a few wounds in return. The Culexus appeared in the centre and targeted the Jump Captain but failed to harm him, meanwhile the Vindicare wounded the Lieutenant twice. Two Storm Shield Veterans also fell to a few small arms fire. 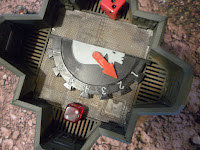 At the start of turn two it was fairly even with a few objectives held and both getting First Strike. 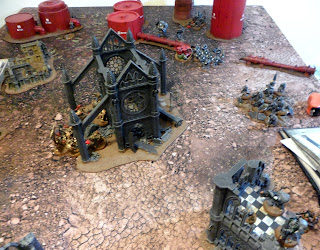 In Turn two the Relictors Devastators struck at the central Custodes Squad with Characters dragging down three Custodes with heavy grav and missile fire, shaking the wounded Valoris who then sought cover of the church ruins. 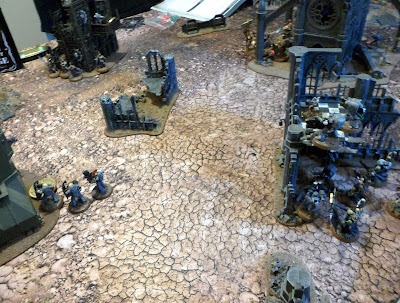 The approaching Eversor was shot by the Company Veterans but survived and then charged them to only take out two in combat, the invulnerable Storm Shields holding him at bay. The exposed Culexus and Callidus both fell, Culexus to massed fire and the Callidus to an intervention of the Teeth of Terra Captain. 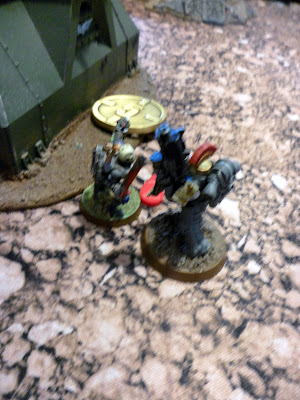 After his stim-fuelled killing of the venerable, the Eversor failed to capitalise and only struck down two veterans, the hero Veteran Sergeant survived going toe-to-toe with a madman and promptly ended the operatives life with a well aimed Storm Shield thrust and a Combat Blade jab - fortunately his over stimmed chemical concoction didn't explode! 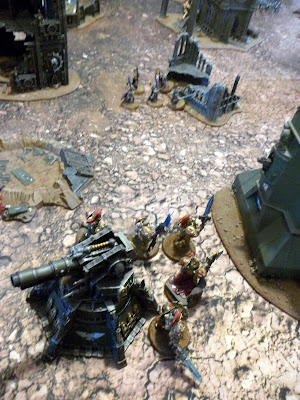 Elsewhere the Sisters moved up into the ruins opposite the Devastators and the Custodes second squad on the flank moved up to the bastion. 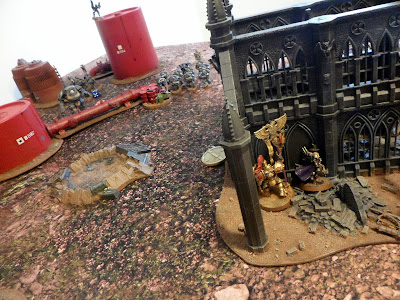 The Custodes and Inquisitor in the centre hid in the ruins of the church, a little more wary of the Relictors gunline now... the exposed Sisters over by the Devastators faired a lot worse and were pulversied by Grav and Frag Missiles. 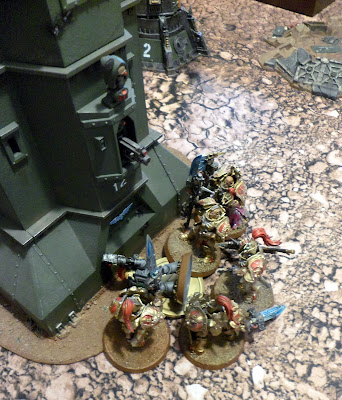 The hero Veteran Sergeant fought bravely, resisting the might of five Custodes, eventually being dragged down and given the Emperor's judgement with a well aimed Misericordia Blade. Luring out the Custodes into the crosshairs of the Devastators - he died a hero of the Chapter! Over the other side of the battle, the Vindicare spotted the Jump Captain and wounded him 3 times. 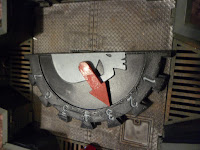 At the start of Turn 3 it was still fairly equal on points, I think 5 all. 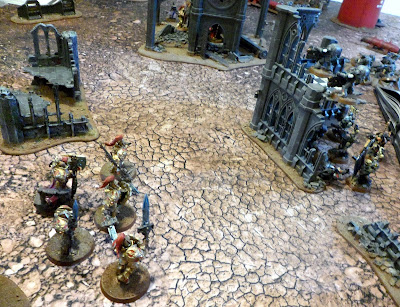 In Turn 3, the Devastators and nearby Tactical Squad shot at the Custodes advancing towards them, cutting down two of the warriors. They stayed in the line of fire to claim the objective. 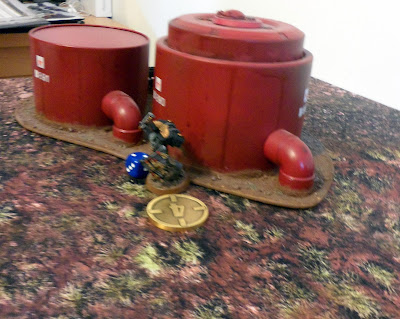 Over the other side of the battlefield, the Jump Captain launched himself towards the Sisters of Silence holding Objective 4, cutting them all down and claimed the objective for the Relictors. 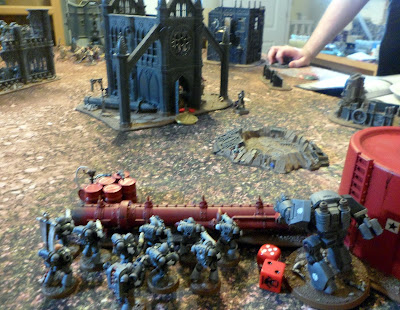 The Tactical Squad and Contemptor shot at the ruins, taking another Custodes down and killing Inquisitor Greyfax. The majority of the Custodes in the centre hid in the ruins. (like the cowards we know they are... Siph) 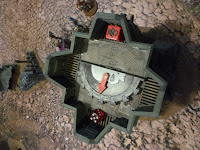 At the beginning of Turn 4 it was still equal however a set of impossible cards for the Relictors and some fancy killing by the Custodes would change that. 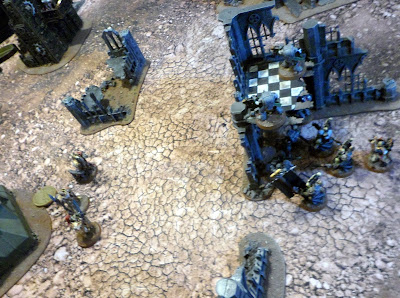 The Devastators shot at the pesky Vindicare Assassin and failed to root him out of his cover, plus more shots at the Custodes in front of them but the Storm Shield saved all of the hits. In the Custodes turn, the Jump Captain was busily claiming Linebreaker and working towards the Objective where the Vindicare was, however the Vindicare moved and then shot the Captain right between the eyes giving Slay the Warlord and Kingslayer for 4VPS. 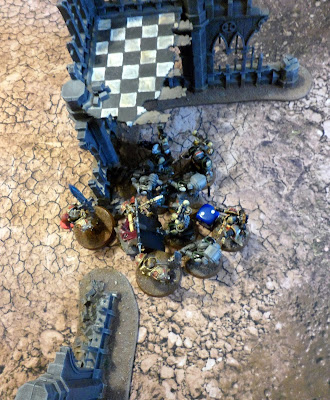 The Custodes charged the Devastators and the Characters in the ruins, cutting down the Sergeant and a Missile Launcher, but the Lieutenant and Chaplain fought back taking down a Custodian. 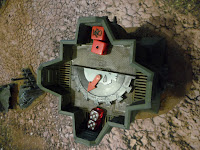 At the start of the 5th Turn, the card gods had deserted the Relictors and even though they had the numbers on the battlefield, the Objectives remained out of their reach. 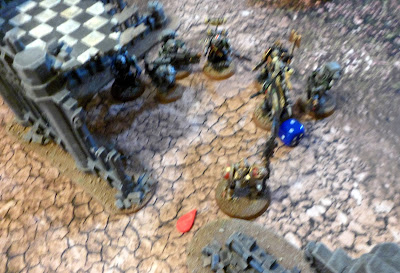 Being from Ultramarine geneseed, the Relictors withdrew from Combat and fired into the remaining Custodians leaving just one Custodian amongst them. 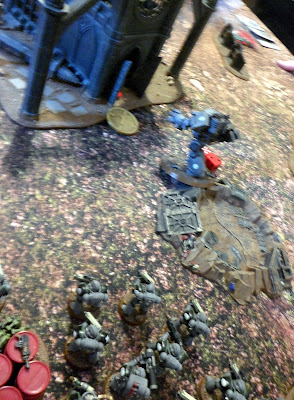 The Contemptor raced to the centre to harass the lurking Custode Warlord and claim the Objective outside the church. 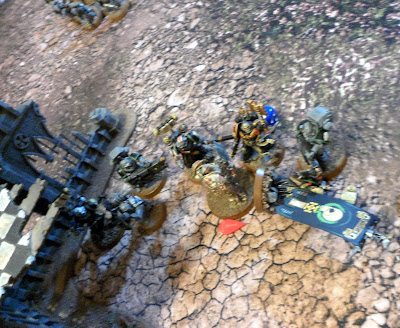 The Custodes struck back, charging again and felling the Company Ancient. Elsewhere, Trajorann charged the Contemptor and cut him down with ease!

No in the open and the battle rolling into a Turn six, Trajorann was scythed down with the combined firepower of 2.5 Tactical Squads in revenge for the loss of their own Captain. The final Custodian by the Devastators was suitably crushed with Grav Weaponry.

The battle came to an end with only two Custodes models left, the Assassin and the Vexilla. 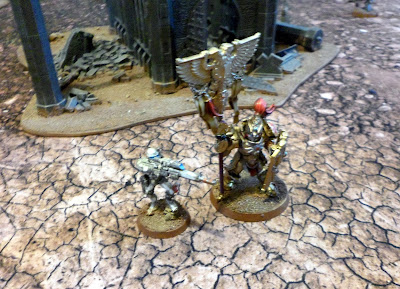 The Relictors were still in strength, but with the loss of the Captain, Ancient and Dreadnoughts, the Chaplain led them from the field to re-group and reconsider their actions. 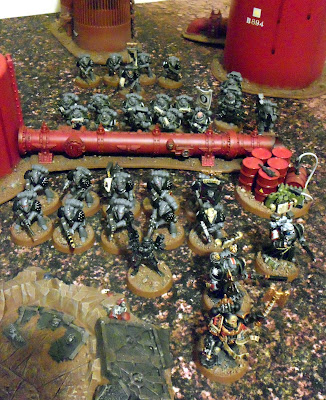 And the final tally was a unassailable lead by the Custodes forces, 15VPs to 9VPs. A victory to the Custodes / Assassins / SoS and Inquisition... and for mankind itself, the Relictors would remain in the fight against Chaos on the side of Roboute, unbeknownst to him that the Relictors were still putting their quest for Daemon Artifacts above the interests of humanity. 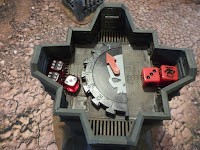 That was a fun game, many different units and a few mistakes were made, the biggest one allowing three Assassins to tear into the Relictor lines in Turn 1, but a fun learning game all the same. Lord Halfpenny needed a lesson in 8th, and I think he got it - play the mission, forget casualties and he prevailed with only two models left. I learnt that the card gods can be cruel...

Thanks for dropping by, hopefully you enjoyed my tale and the pictures. Cheers, Siph.
Posted by Siph_Horridus