Hi all, so when I left off, I had built the first foot and received a second Warhound – since then I have built up a base, the second foot and legs up to the hips – which I think has taken in the region of 15 – 20 hours over the space of a few days (so yes – my girlfriend is loving the fact that all I’m doing at home is building this thing…)


Let’s start off with the base; the base a wooden cutting board (roughly A4 size and 1cm thick) which will provide a solid foundation – highly unlikely to tip over and thick enough to get some decent length pins in. And only £4 from Tesco's (other cheap supermarkets are available). I bought two – so that both Warhounds will be the same. It is completely possible to stand a Warhound on its own feet without a base…but I just couldn’t see that happening… 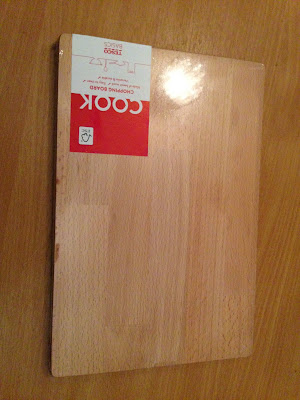 This base will be scenic of course; the idea being that the Warhound is stepping over a trench, so it will force the model to have a dynamic pose and one which you don’t typically see these models having (most have the posed mid-step at best). The trench wall is a chunk of polystyrene cut to shape with some balsa wood panels and a few bits and pieces scattered around.

Because the second foot will be standing on top of the trench, I wanted to make sure there was a stable platform to take its weight, so used two 2mm lengths of brass rod and drilled them through the polystyrene and into the wooden board. 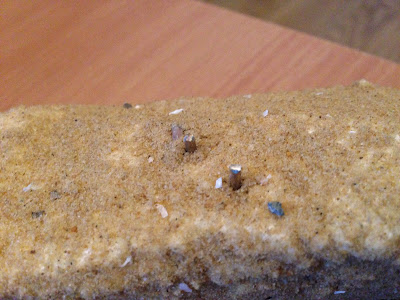 Corresponding holes were drilled into the pad of the foot so that it sank just slightly into the polystyrene. 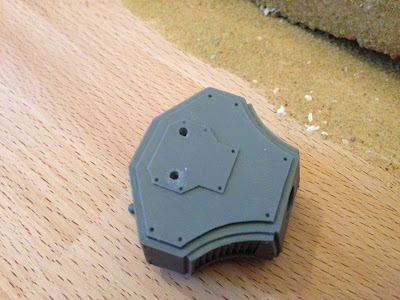 Before I glued it into place, I sealed and coated the polystyrene in sand (easier now than later). As with the other foot, because the weight of the model is through the pad of the foot and not the toes, I didn’t need to worry about pinning them too much. I actually built each toe section by section (pinning in the same place as before) and curled them down around the trench. Pistons were added as before and that was both feet done! 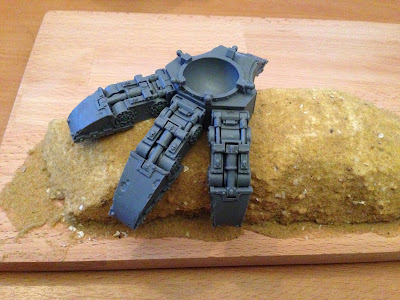 The legs – in my opinion the toughest part; whilst they are fully articulate, there are a lot of big pieces to join that need to meet at the hips – which is going to support some big chunks of resin. I decided to dry-pin the legs so that they were articulate, but allowed me to play around with poses. To do this, I drilled a hole through the centre of each joint and inserted a paperclip. I played around with various poses until I had one where the legs met nicely and the pose looked natural – at this point I fixed the first foot to the base. 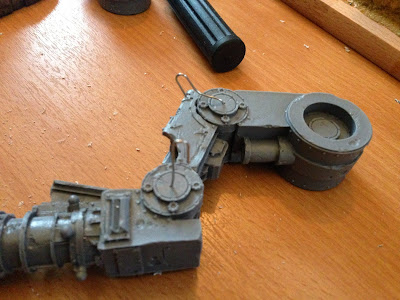 The foot was glued into place – which was strong enough to fix it whilst I fixed two inch long pins through the foot and into the base – it’s not going anywhere now. 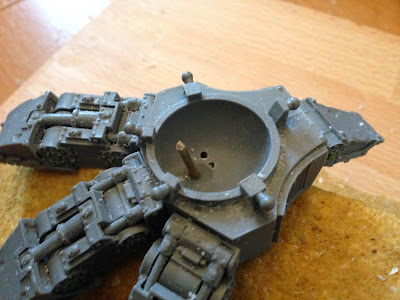 A note on pinning – to get the strongest joint use two pins at angles to each other, that way there can be no rotation and it’s impossible (almost) to break the joint. This might mean fixing the first pin and then drilling and placing the second after – so it can be tough to find places to hide or cover the holes. Also – A hobby drill (like a Dremel) is a lifesaver on project this size and well worth the investment.
After the feet, I focused on the lower legs, marking on the ankle ball and foot socket so I could remove it and replace it in exactly the same position later. I then glued and pinned the leg into place. Time for ankle pistons (basically the same as foot pistons…) 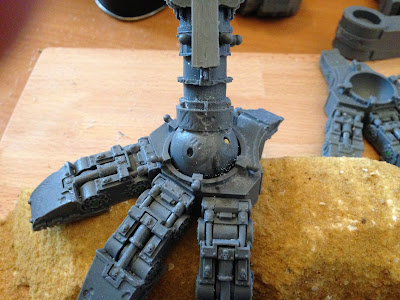 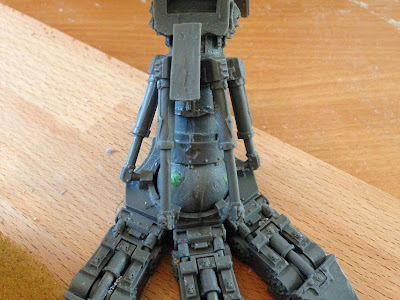 At this stage the feet and lower legs are solid and the rest of the legs are still connected by the temporary pins – so I was able to temporarily add the waist section and connect to the hips with more temporary pins. Now the entire lower of the titan is on the board and can manipulate the articulate pieces simply by moving the waist around – I did this until I was happy with the positions of all the leg components and marked them off. Then it was simply a matter of a pair of pins through each joint and remove the temporary pins. 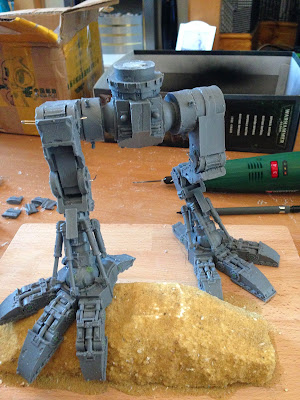 Here only the feet and lower legs were glued - everything else was dry fitted with temporary pins - standing under its own weight. 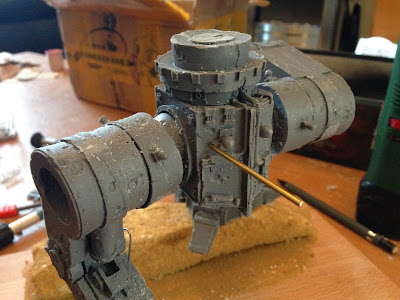 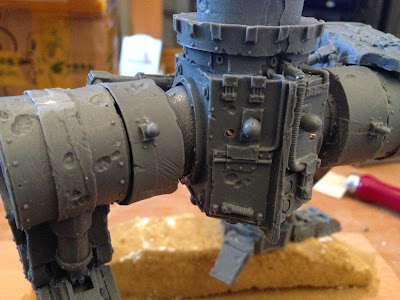 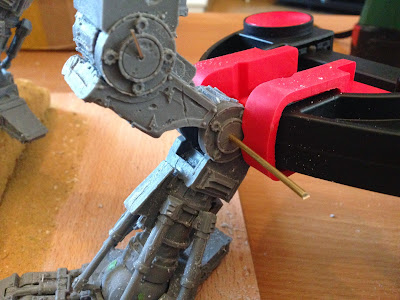 With all the joints double-pinned I tested the structure to see how stable it was – good, but there was a little play in one knee, which over time may shift or distort, so I drilled and added another pin lengthways through both pieces to support it. Testing the lower half now, I would say that the legs could easily hold 5Kgs of weight and I am able to pic the entire model up (including board) from just the waist with no play, bending or wobbling. In other words – bomb-proof! 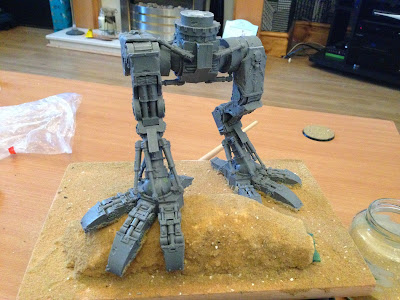 Next time – starting the torso.
Posted by the 6th degree