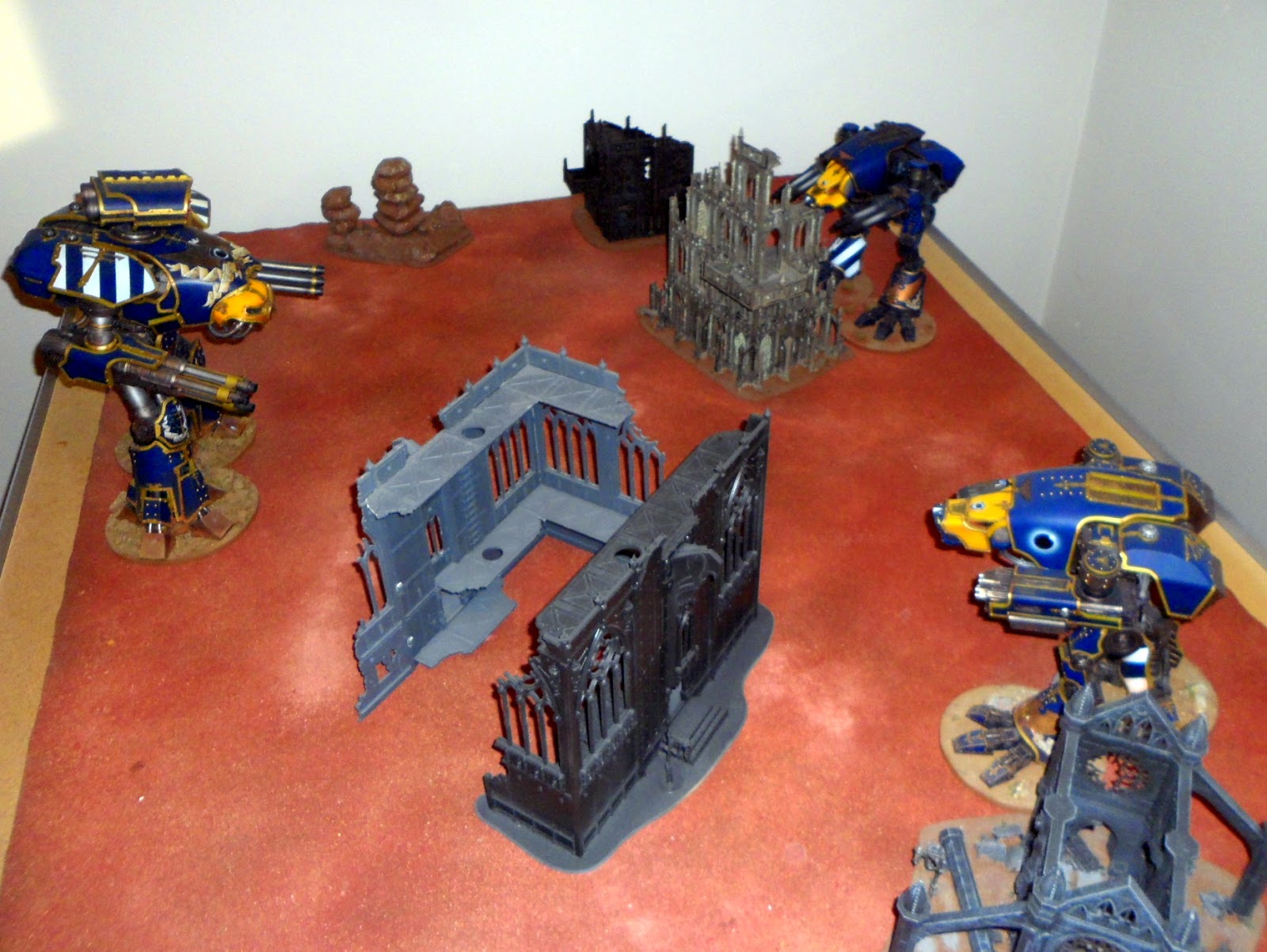 Hot on the heels of 6thDegree's new project, you'll see why he feels he needs a Titan! My Legio Astorum are stuck on the training grounds until a worthy foe are found to test their mettle.

Lord Halfpenny and I had a quick battle using the Legio Astorum Titans I have, points wise 1 Reaver is approximately the same as 2 Warhounds, so we would both have a go using the Titans, I had the honour of using the mighty Reaver Honorum first, and Lord Halfpenny Canis Bellum and Canis Praetor Warhounds. Lord Halfpenny stole the initiative, reflecting that the Warhounds are fast and agile, leaving Honorum out in the open. 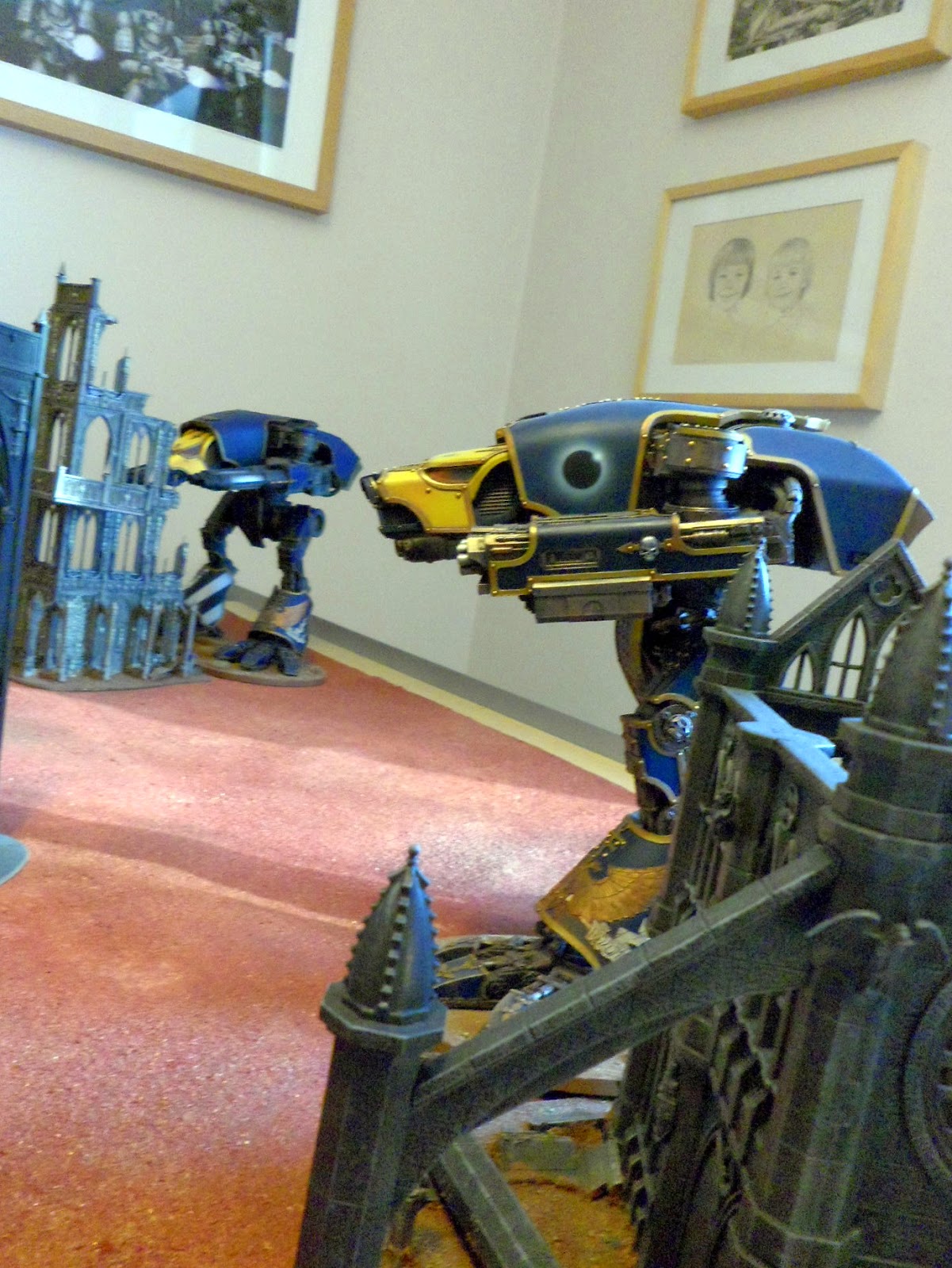 Canis Bellum opened up first with it's Void Shield stripping Vulcan Mega Bolter, stripping all four Void Shields and not making a scratch with the Plasma Blast Gun on twin shot. 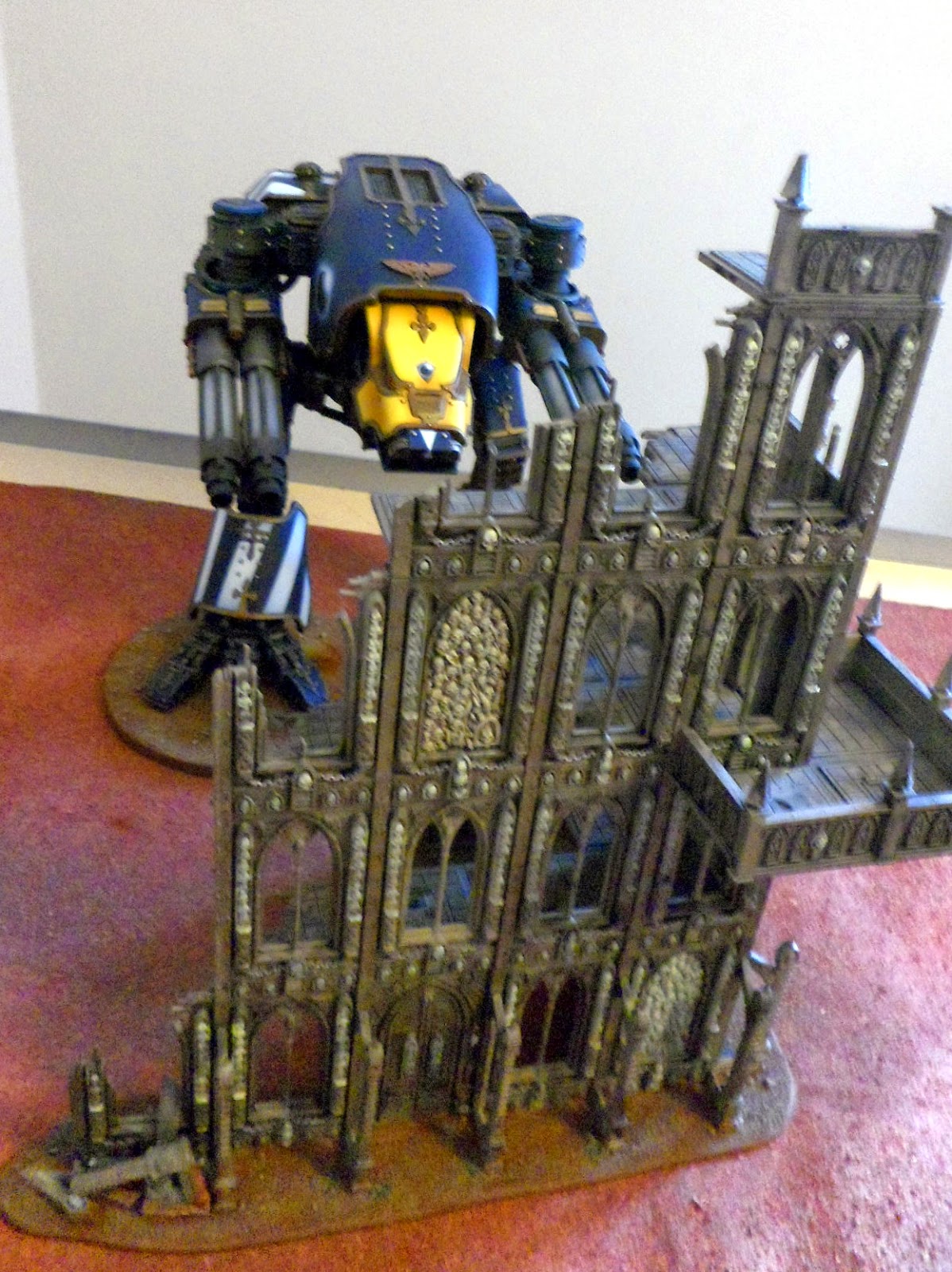 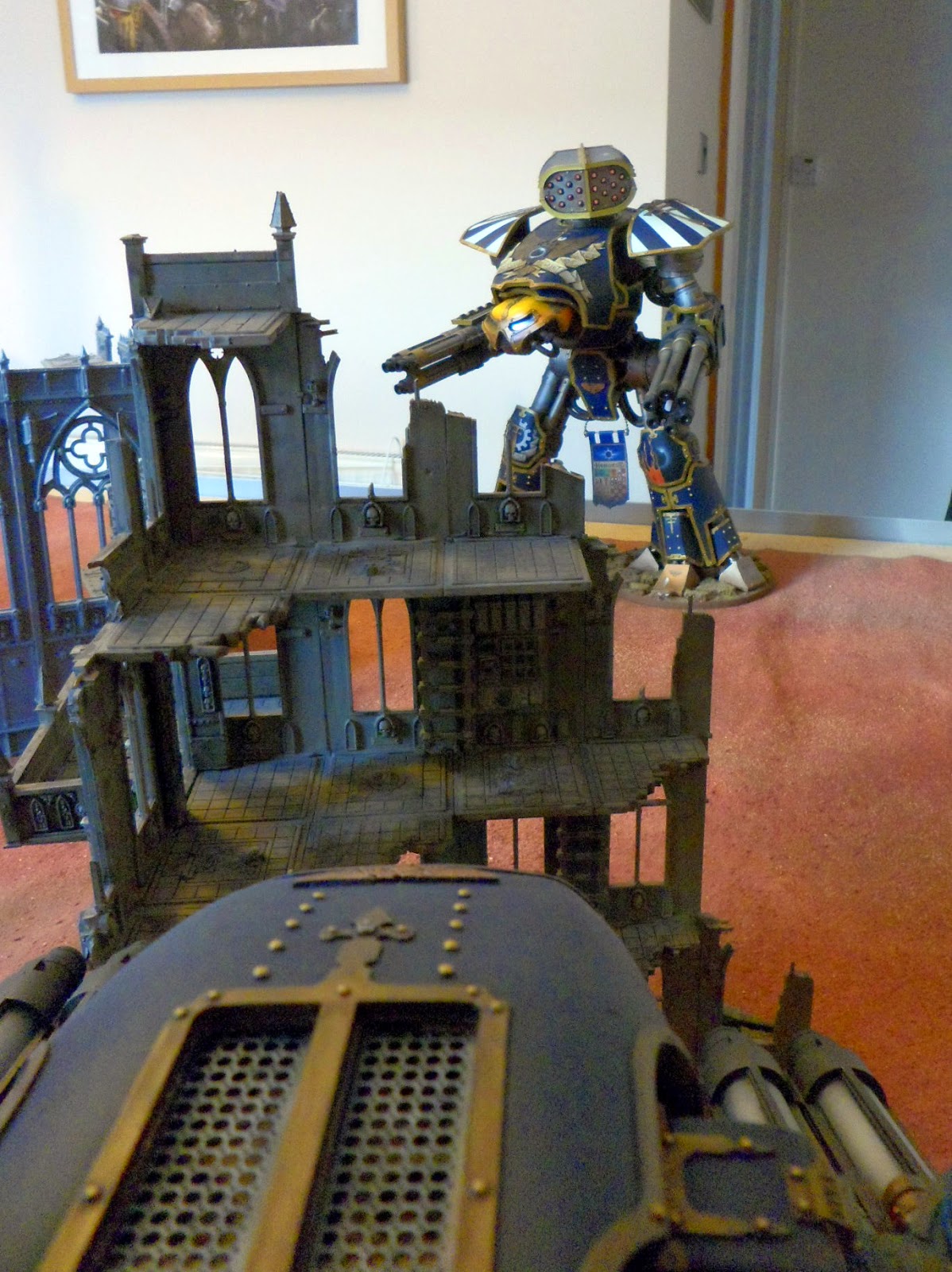 This left Honourum exposed to the wrath of Canis Praetor's Turbo Laser Destructors, D-weapons, nasty - all four shots hit and stripped 13 hull points off the Reaver, leaving it on just 5 HPs... But now it was Reaver Honorum's turn... The biggest threat was Warhound Canis Praetor with those D-Weapons. 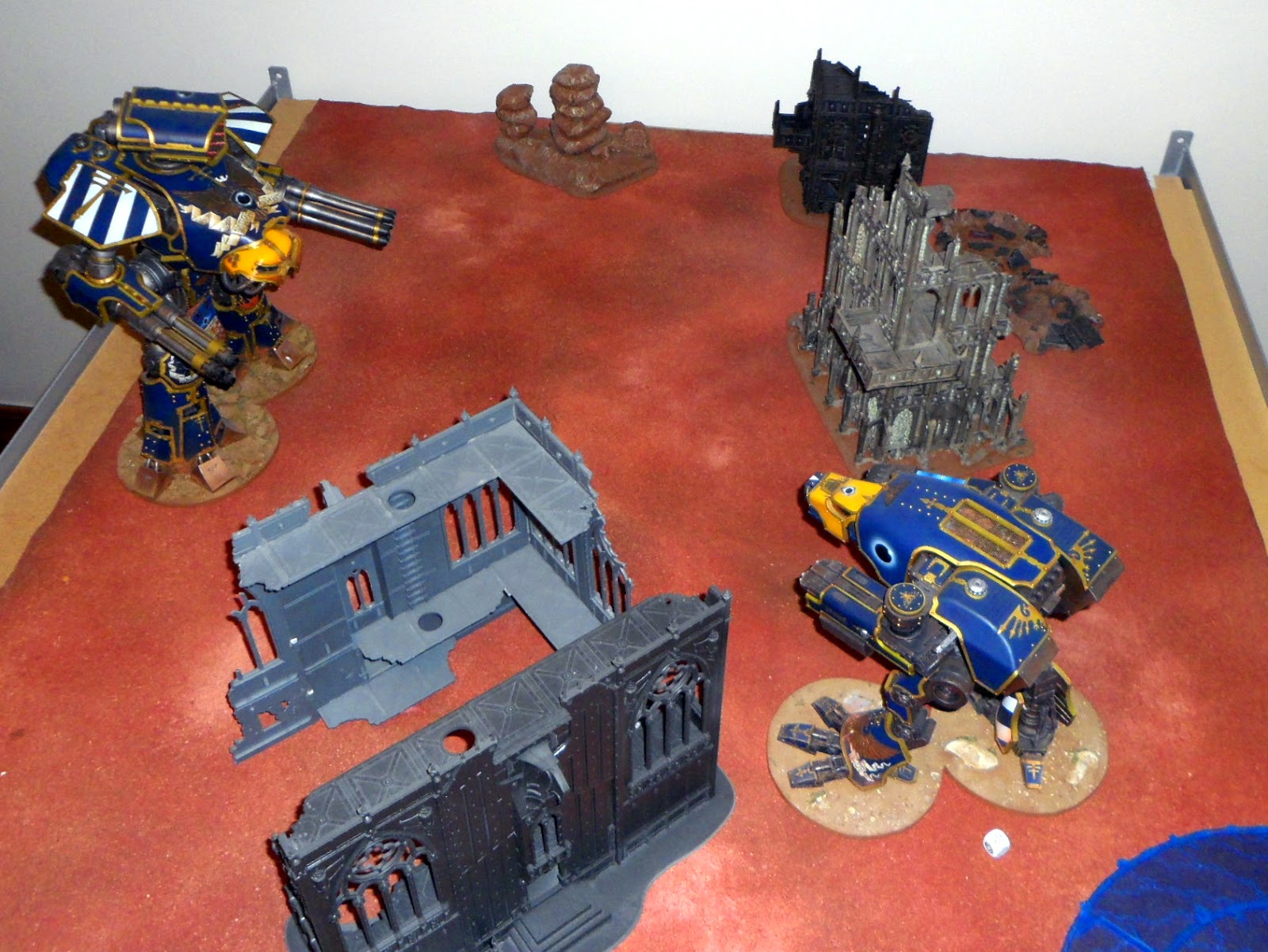 At the end of Honorum's turn, Canis Praetor was no more - The Apocalypse Missile Launcher stripped one Void Shield, the Gatling Blaster stripped the remaining Void Shield and scoring some hull point damage, but leaving the Warhound exposed to the 3 barrel Laser Blaster. 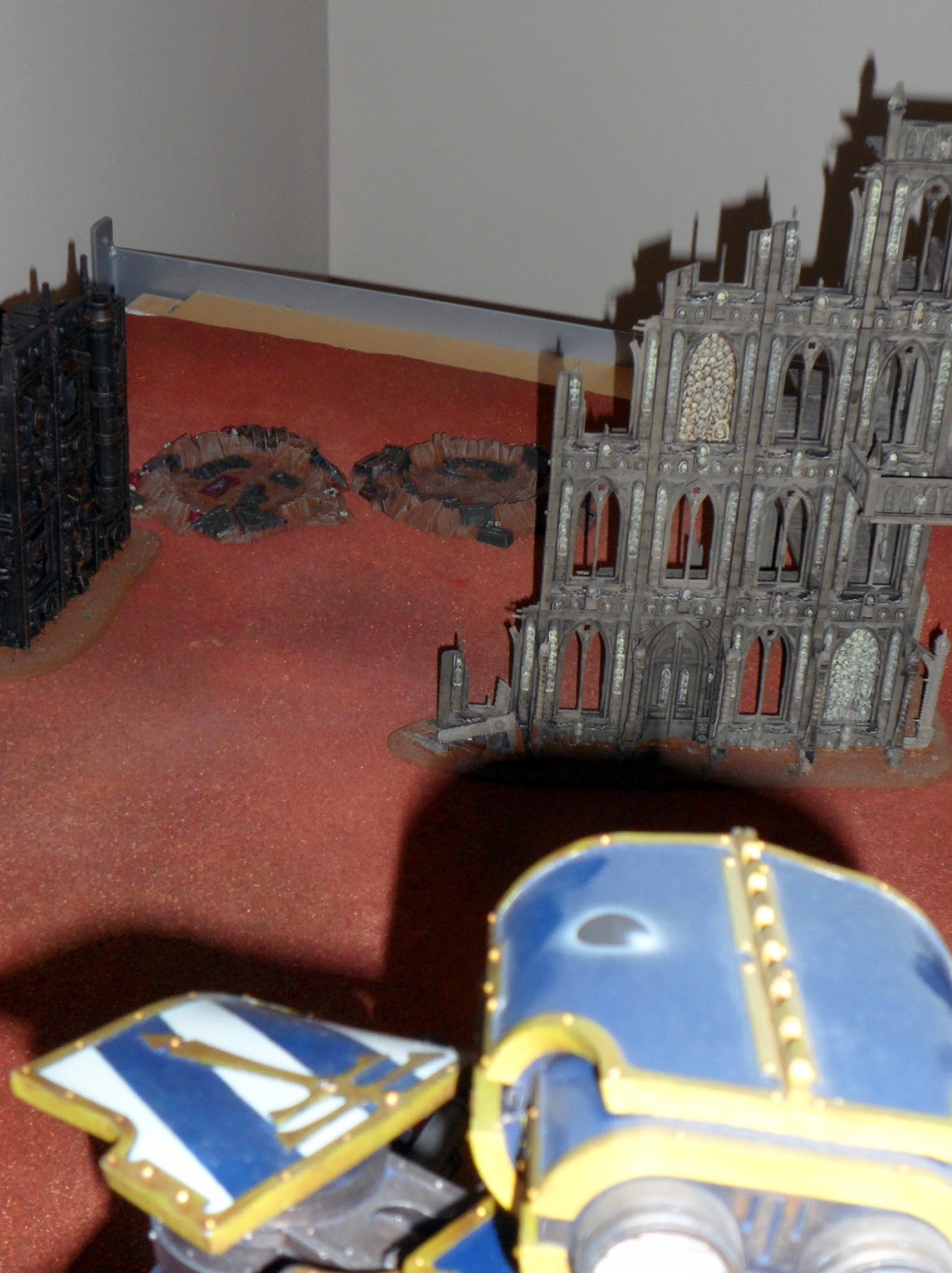 The D-weapon goodness stripping all the remaining hull points and causing an Apocalyptic Explosion! One Warhound down, and the biggest threat to Honorum gone. 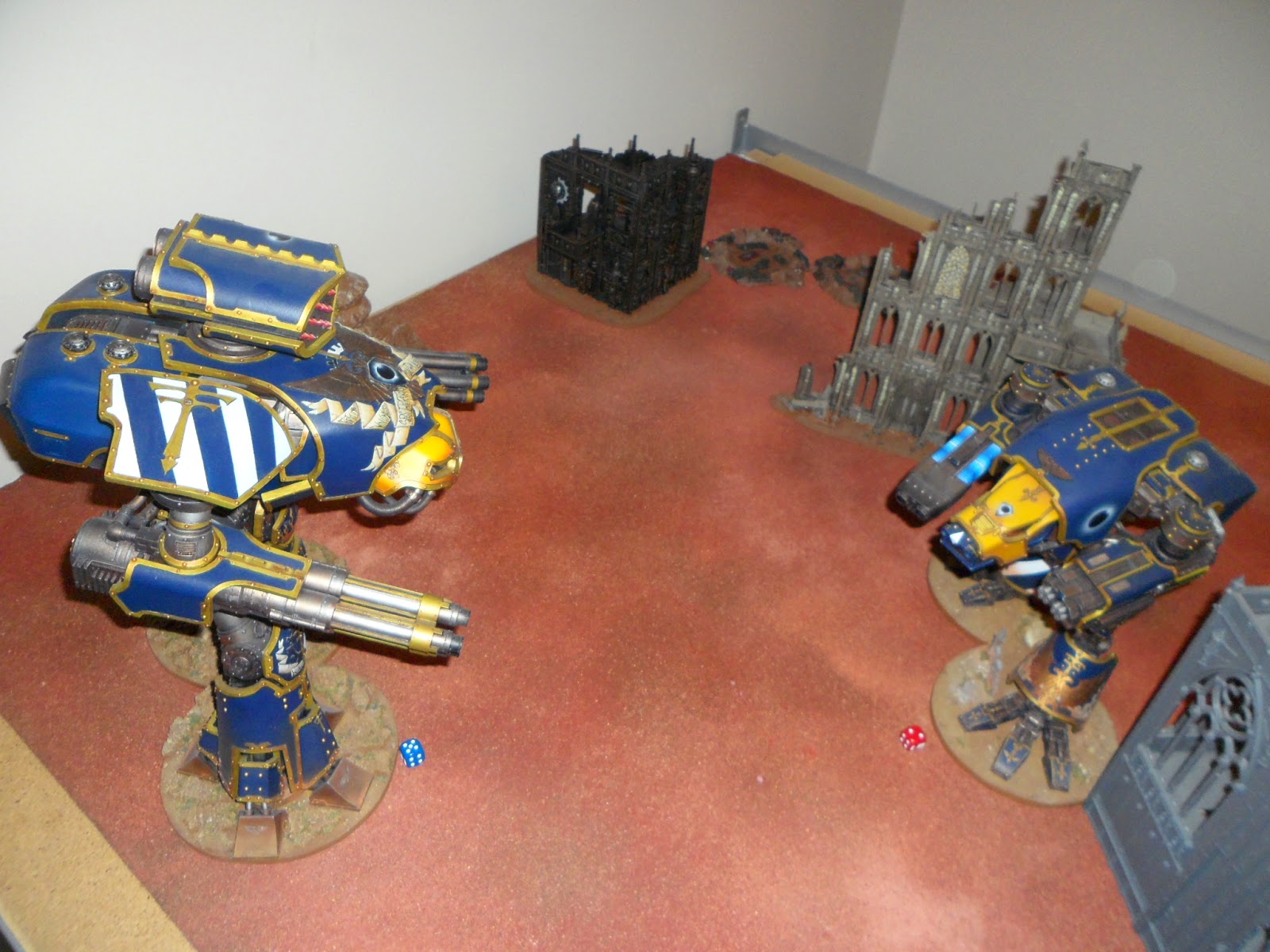 The Reaver re-raised 3 Void Shields (re-raised on 5+) and the Warhound remained on 2 Void Shields. Turn two saw the now out gunned Warhound open up on the Reaver with the Vulcan Mega Bolter stripping the voids again and a fully charged Plasma Blastgun (ST10) to penetrate the AV14 armour - stripping 1 more HP, leaving the Reaver Honorum on 4HPs. 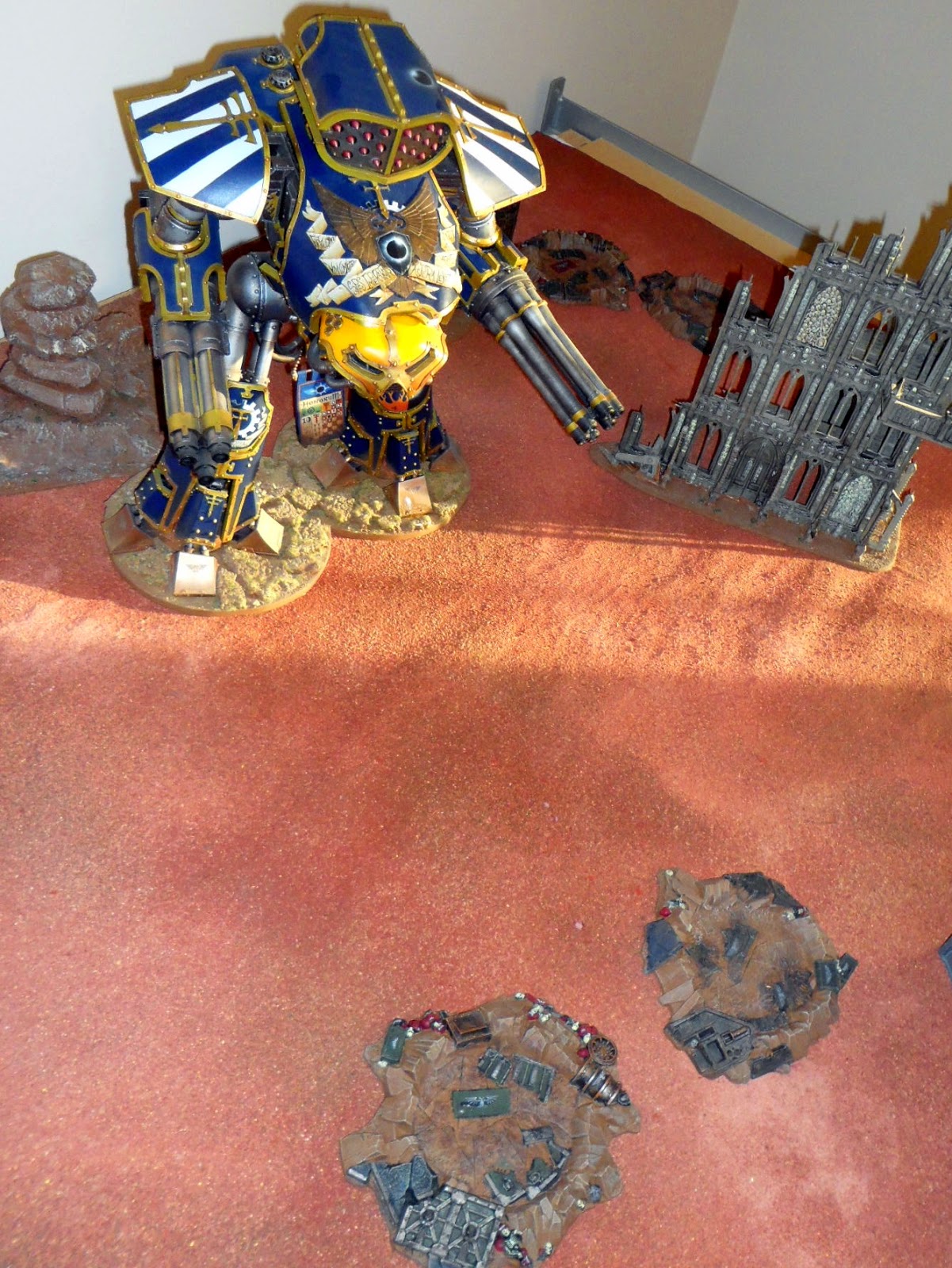 The second run was Lord Halfpenny's turn to pilot Honorum the Reaver, and Siph's turn for the two Warhounds. Siph stole the initiative, again a lucky move - maybe reflecting the agile nature of the Warhounds again! Lord Halfpenny weapon swapped out the Apoc Launcher to use the more effective Vulcan Mega Bolter. 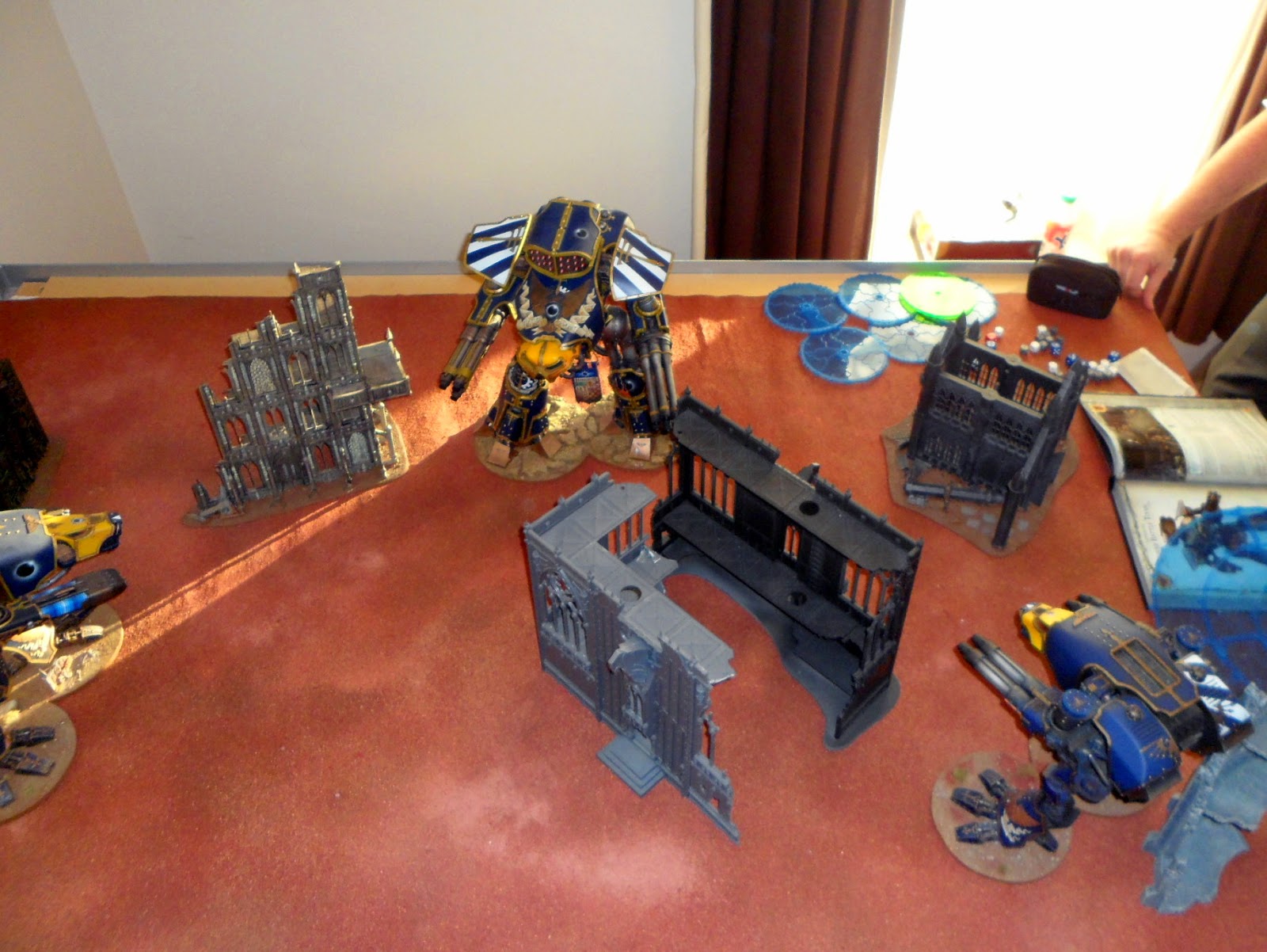 I chose a split attack, again using the Vulcan Mega Bolter to strip the Voids off the Reaver, failing to score on the Plasma Blastgun but Canis Praetor opened up with 3 of the 4 Turbo Laser Destroyers scoring 6 HPs, leaving 12 HPs on the Reaver. 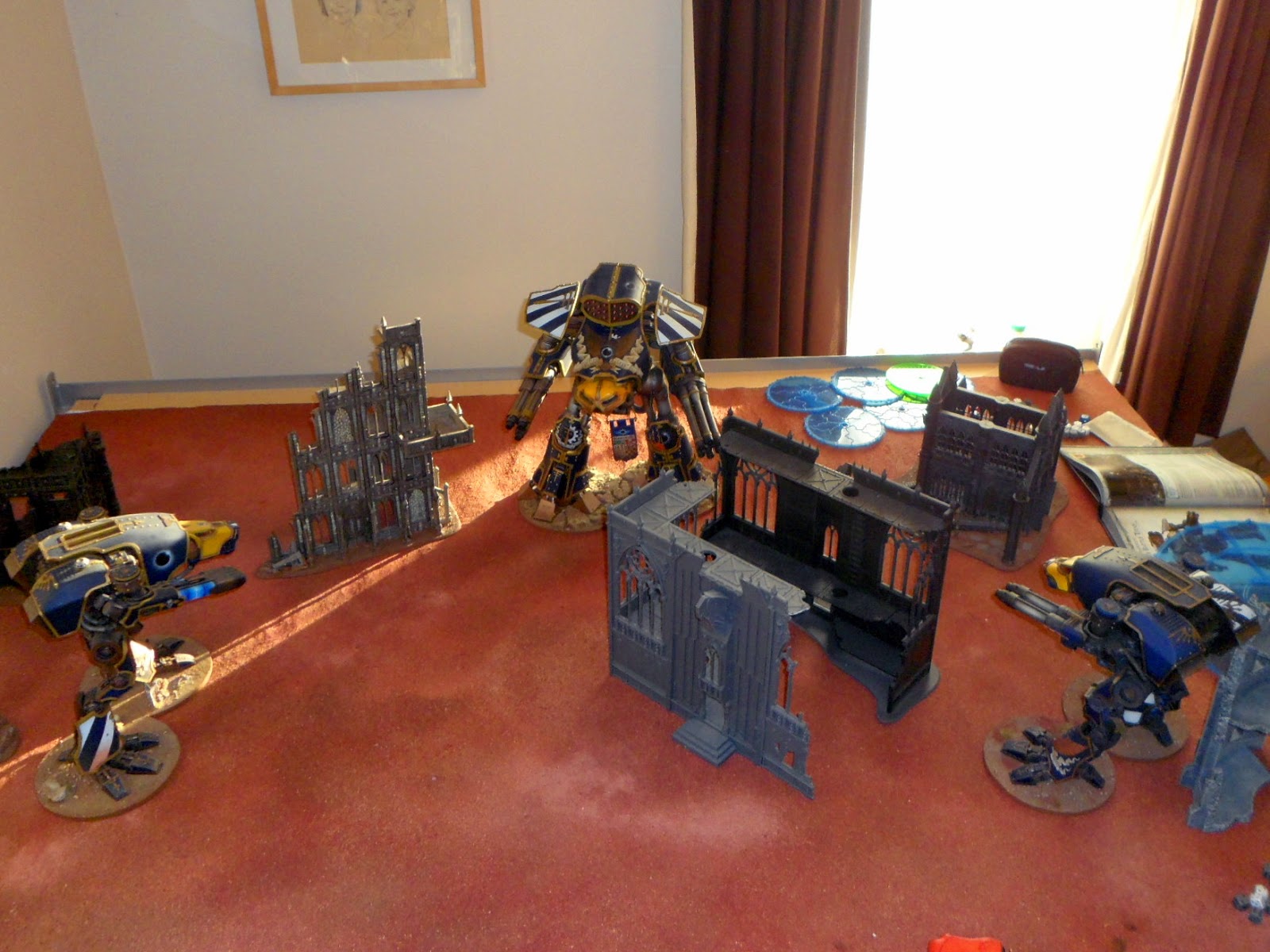 Lord Halfpenny sought to extinguish the Warhound Canis Bellum first, and stripped all the HPs from the Warhound, leaving a smoking crater... 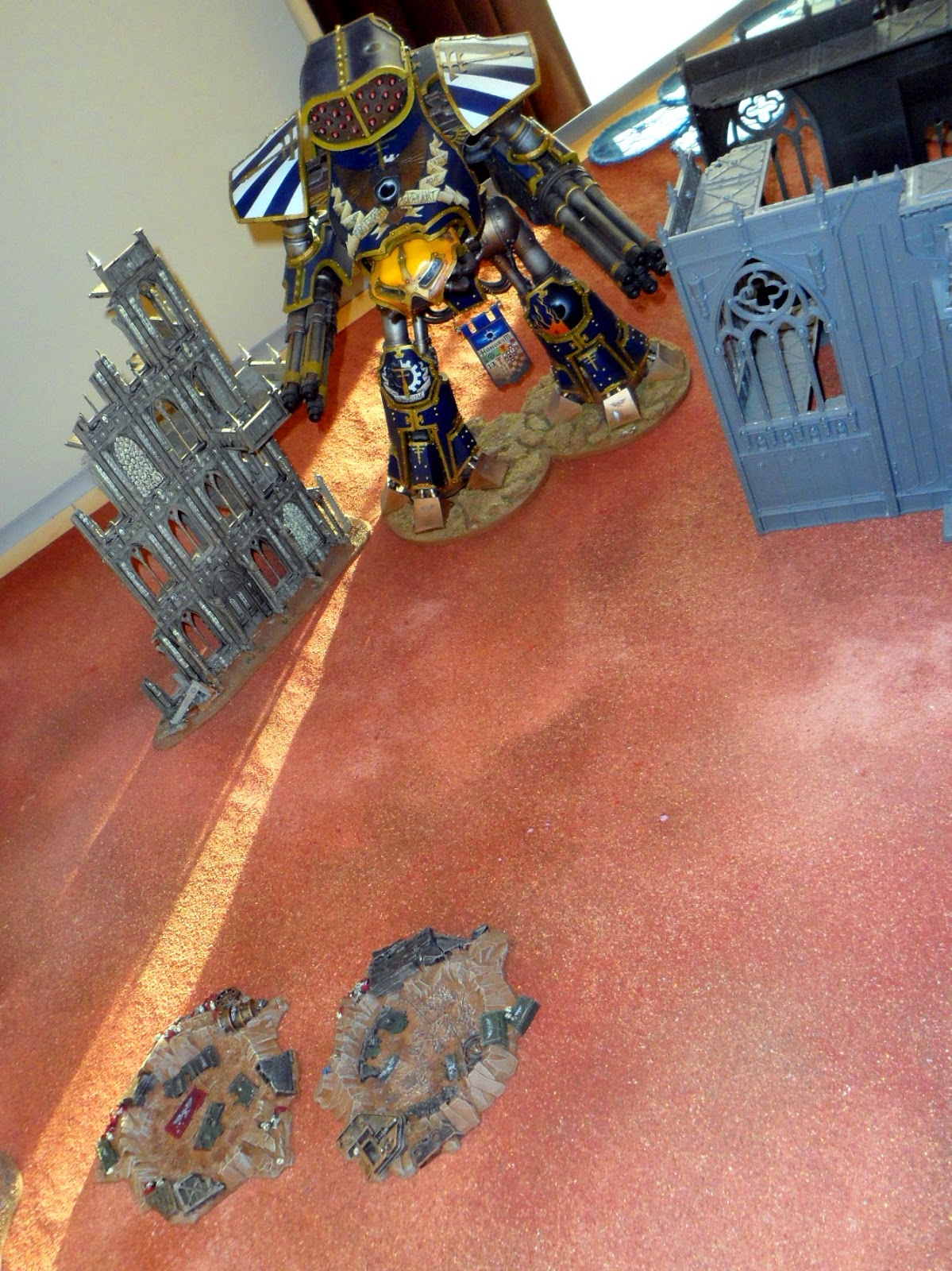 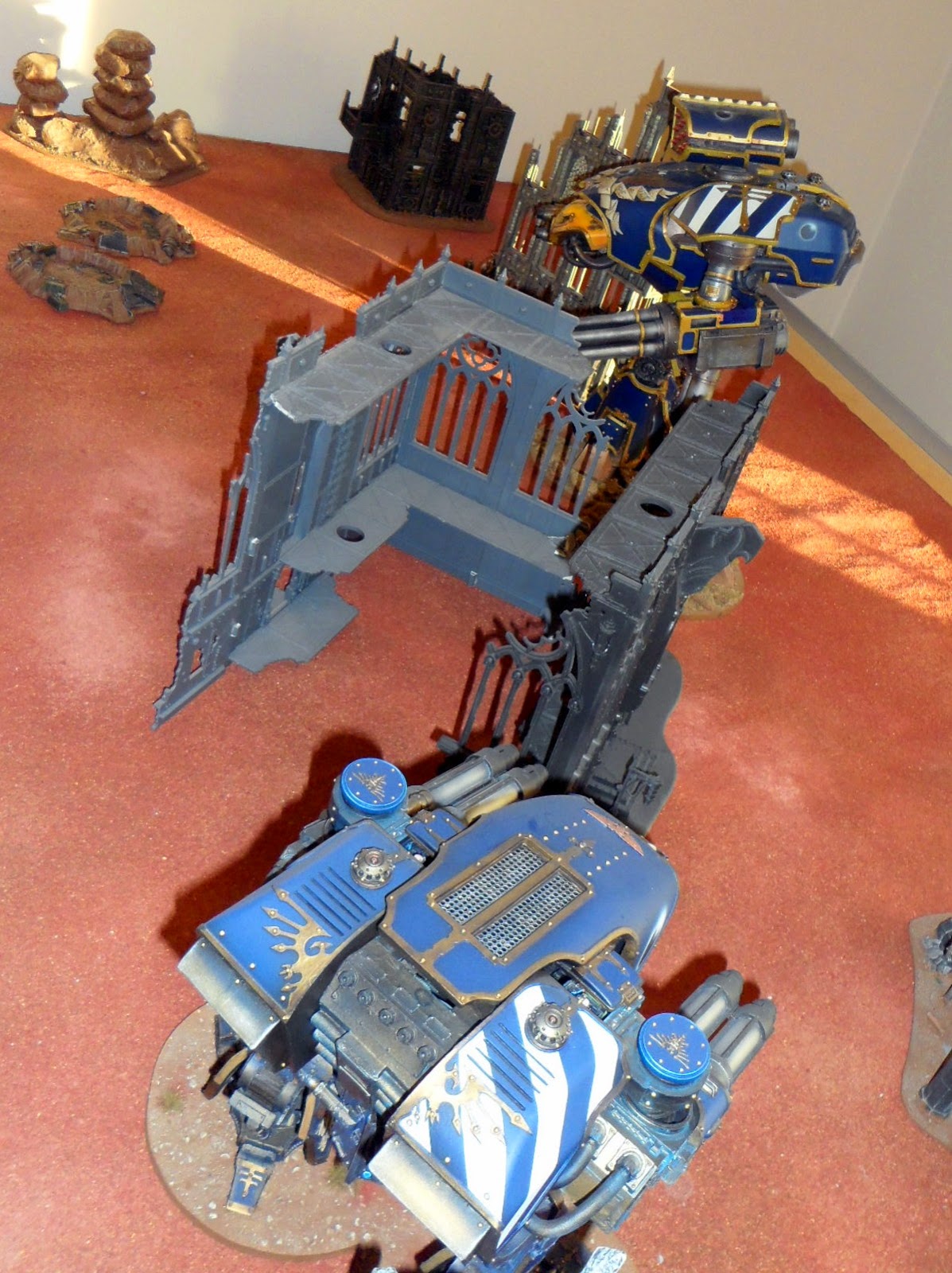 Unfortunately Honorum failed to re-raise it's Void Shields leaving it exposed to the attentions of Canis Praetor, who moved into a firing position and opened up with the Turbo Laser Destroyers again - stripping 6 more HPs, leaving the Reaver on 6 HPs. 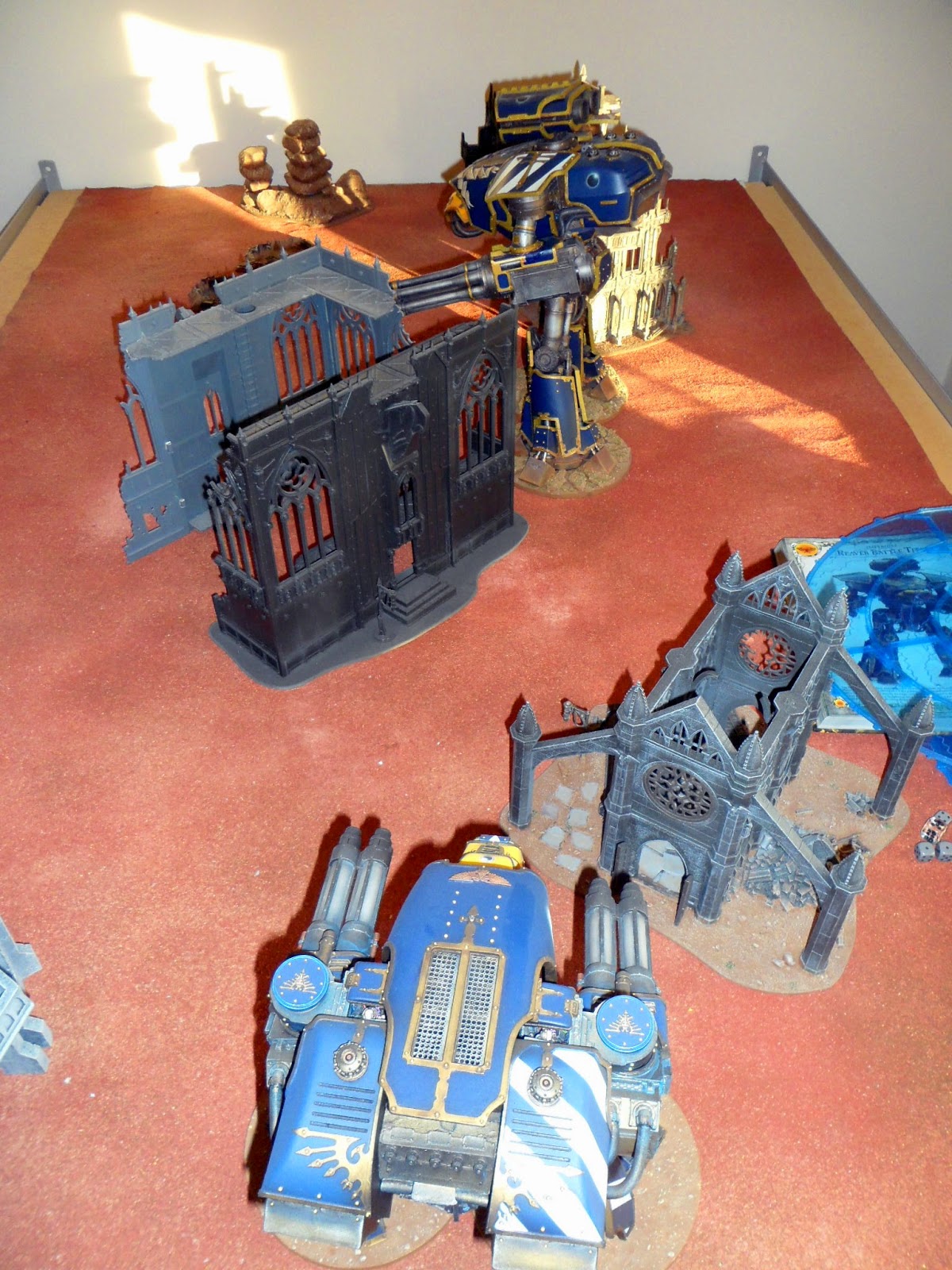 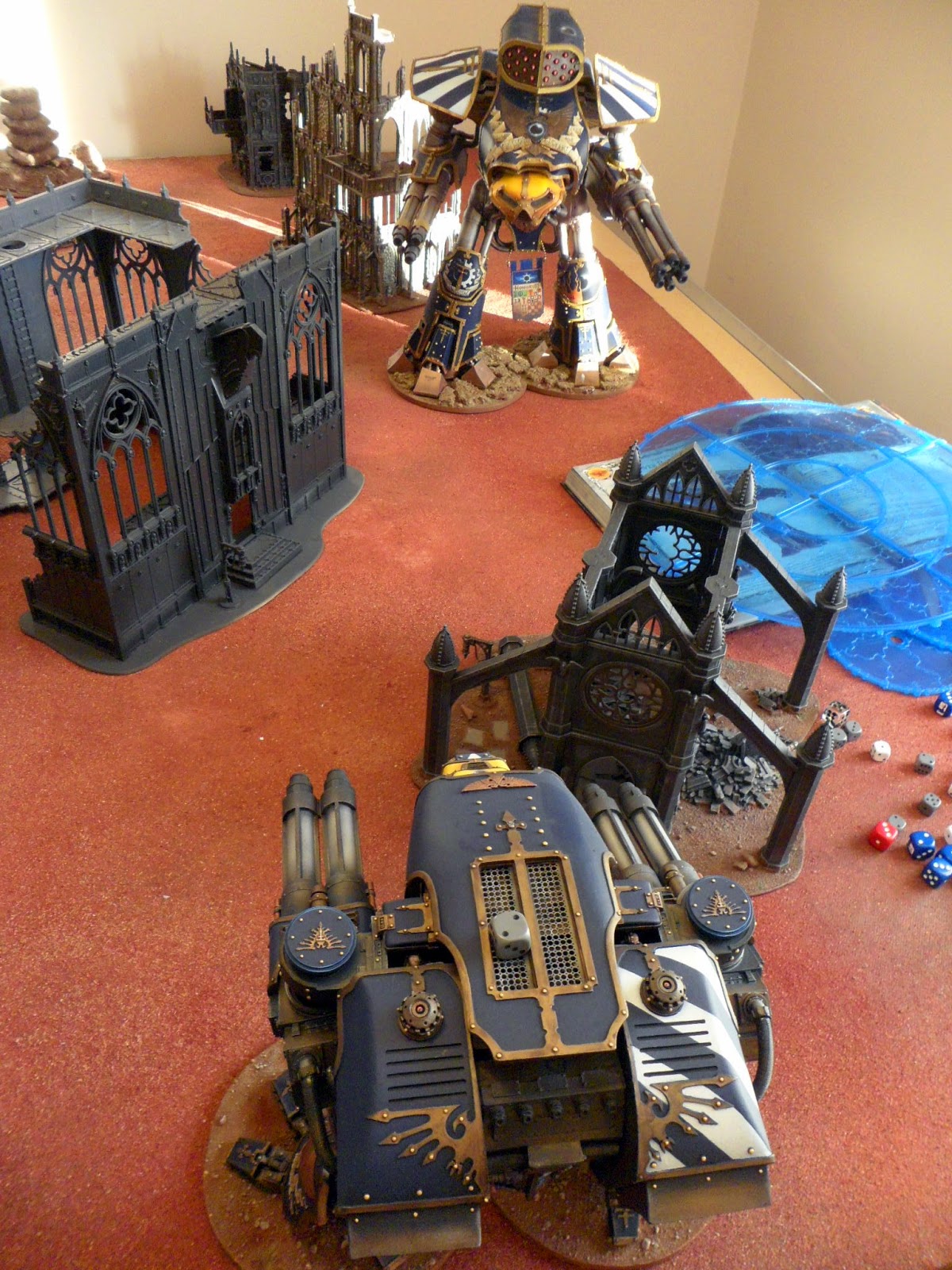 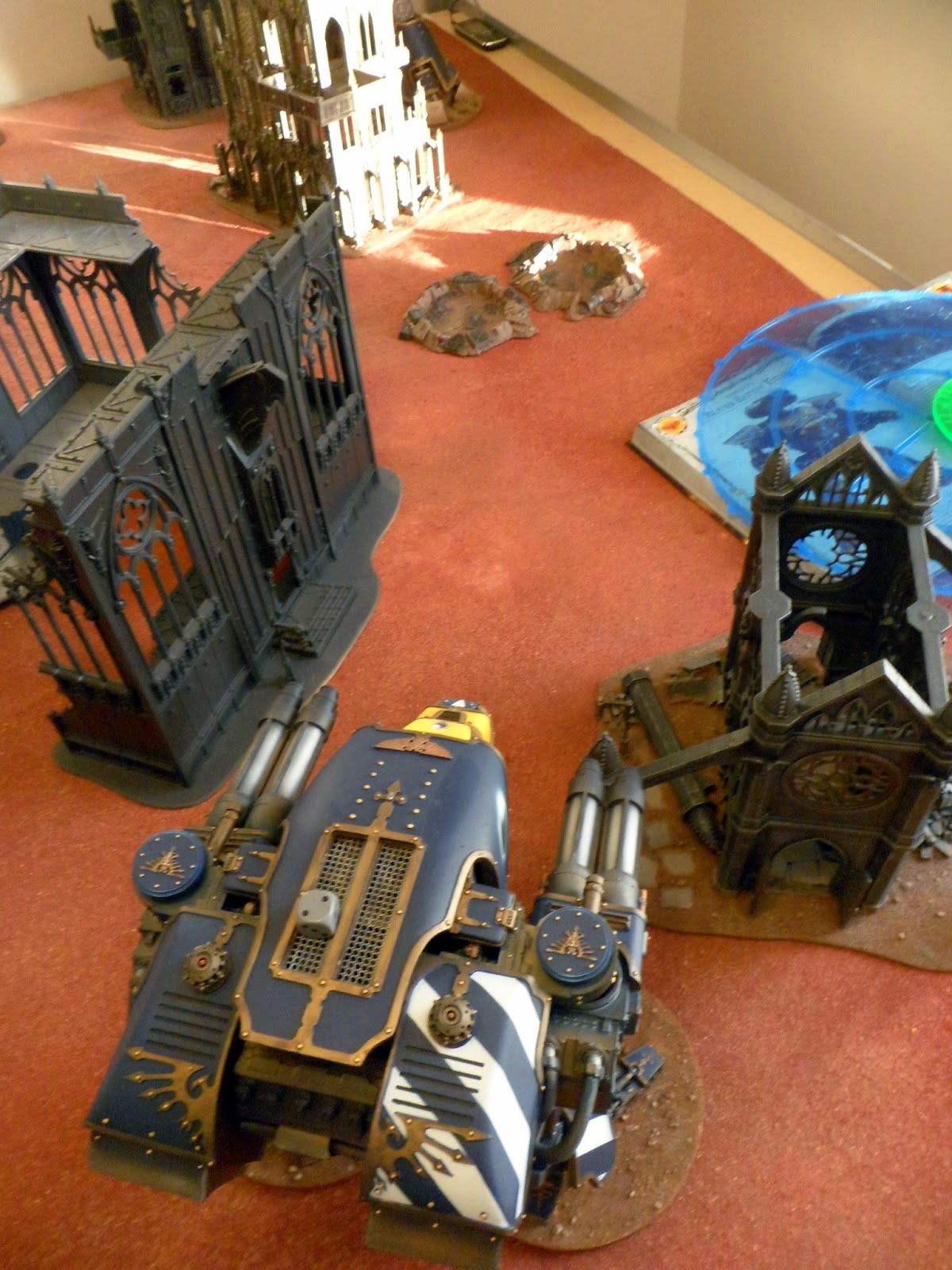 But alas, the Warhound replied with the full firepower of the Turbo Laser Destroyers, needing to strip the Void Shield and 6HPs, and doing so, just. Win for the Warhounds!

That was a great laugh and good to get the titans out of the display cabinet. Lord Halfpenny realised the mistake of going for the lightly armed Warhound first was his undoing, but it was nice to see such destructive power being unleashed and since the targets were so big, even with scatter, most of the Large Blasts still hit their targets! The Apoc Launcher is suitable to kill infantry (S7, AP3) but not for stripping Voids. The Vulcan Mega Bolter proved effective at Void Stripping... next time we might try a Vortex Missile! Ha

Hope you enjoyed the report and the photos. We did!
Posted by Siph_Horridus