Another Blog Wars and come and gone; scores of amateur generals pitted their lovingly crafted armies against each other hoping victory…how did it go for me? Urrrmmm….don’t ask…

The actual tournament was great as ever – Alex had improved the format yet again and the day went smoothly with no hiccups (or storming out).

Game One
My first game was against Peter Butler and his Space Wolves with a Knight. I was admittedly nervous going into this game; a Knight can make a mess of my army if I don’t take it down quickly and he also had two units of Thunderwolves, the new CC Dreadnought, flying dog’s head with Lukas and some Marines and a couple of units of Marines in Drop Pods. Luckily we were set up using Hammer and Anvil, so I castled up as far back as possible, using Cultists to protect my tanks from any deep striking Melta. My Obliterators took position high up in terrain on either side of the table, able to shoot anything that approached. 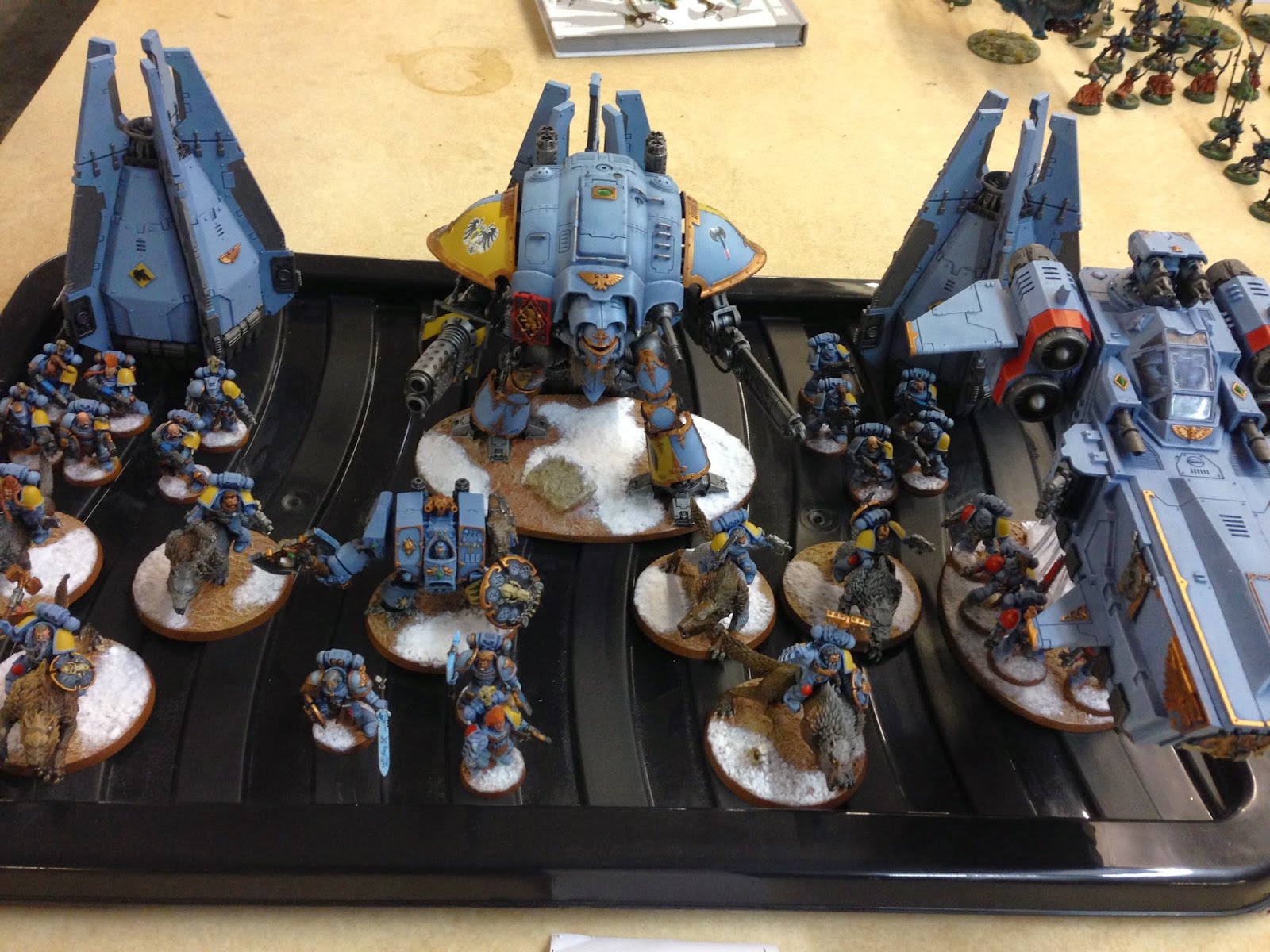 Turn 1 went my way, Peter was able to deep strike nearby with Marines & Rune Priest and Dreadnought, but was only able to kill a few Cultists and slowly advance. In reply my Vindicator made a massive mess of his Marines and Obliterators immobilised his CC Dread. The rest of my shots were able to strip a couple of HPs from the Knight. 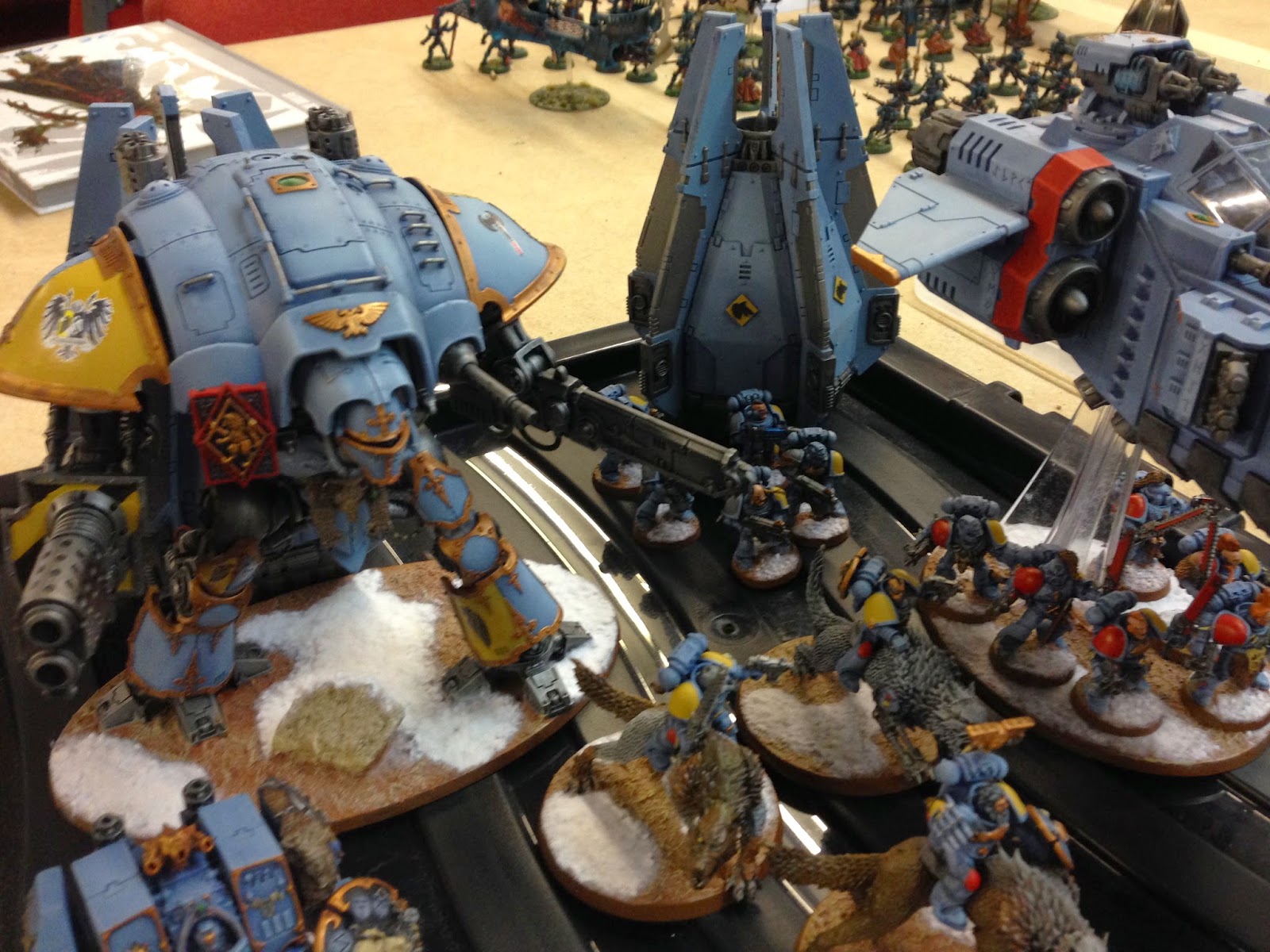 Turn 2 and Peter was still a good 12 inches from my units, but managed to bring the flying dog’s head in. Shooting from the Knight managed to pop a Rhino and some more Cultists died, but again I was left largely unhurt. I followed up by throwing all my firepower into the Knight, which exploded taking out a couple of Thunderwolves. In Turn 3 Peter landed his dog’s head and charged Lukas out with his marines. Overwatch was surprisingly effective and I only lost more Cultists. In my turn I knew I had the game; Abaddon deepstriked in and shot down some Thunderwolves, my Marines shot Lukas and his squad to pieces and the Obliterators shot down the flying dogs head. We went to Turn 4, but by then it was mainly mopping up and I finished with a 1950–605 win.

Game 2
I felt nervous about jumping up to the top tables – and was right to do so…going up against another BW vet Grazer. Grazer normally takes either Nids or his awesome Squat army (counts-as IG) and despite being a great guy, normally gets a bit of a kicking. I actually bumped into Grazer on the way in and he warned that he wanted to try and win for once, so had brought Eldar Wave Serpent spam. 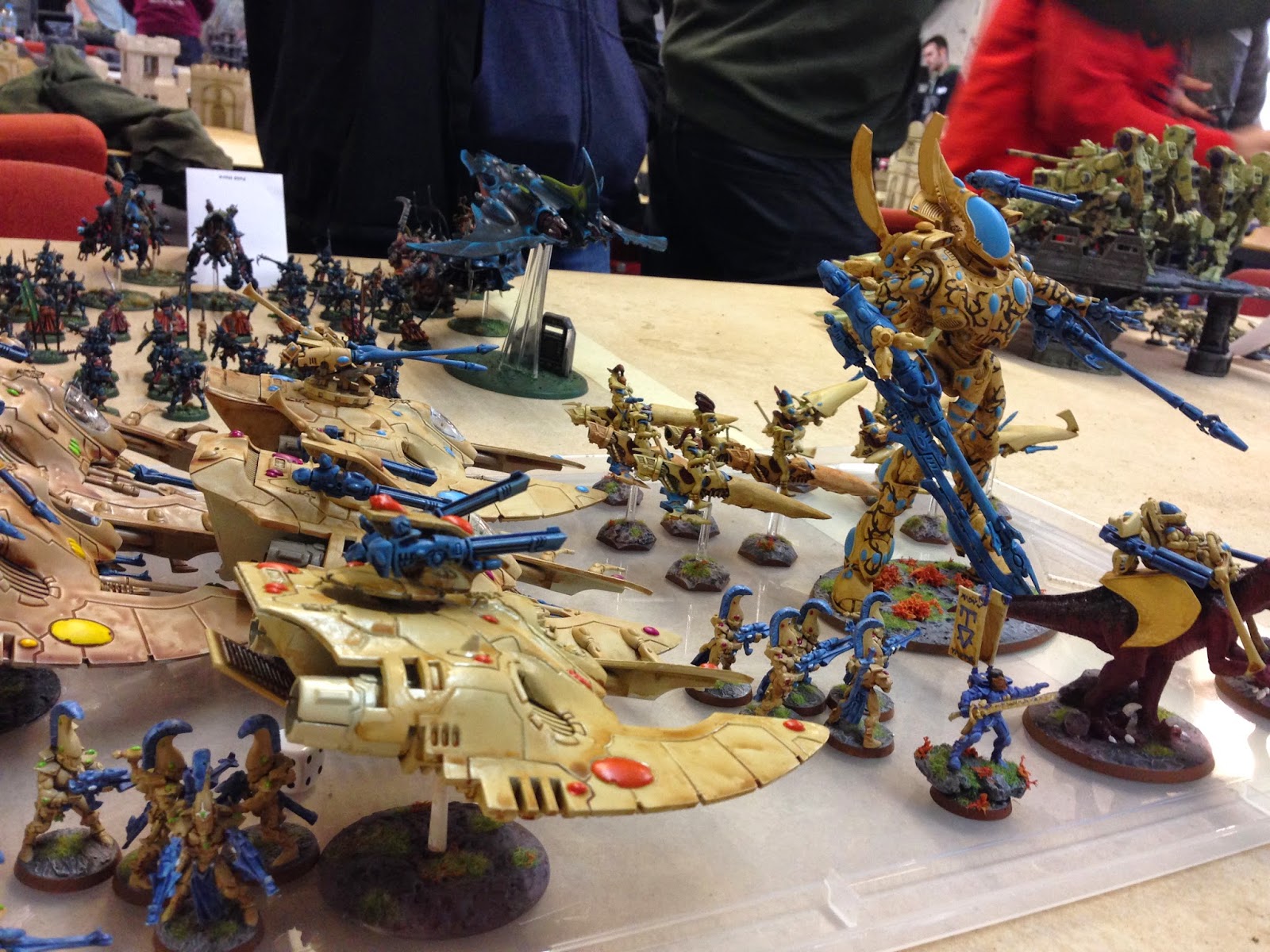 This game was for objectives and I hoped the dice gods would be on my side. They weren’t. What ensued was 5 turns of a 5 Wave Serpents throwing out a dozen twin-linked S6 shots and a Wraithknight mosey-ing around because he was needed. Oh – there were also some Jet Bikes and dino-Walkers! By the end of Turn 1 most of my Obliterators had been torrent-ed off the board, followed by my tanks. Turn 2 removed what was left barring Abaddon (who deep-striked in his deployment to take his objective) and some Troops hunkered down on my objective in a building. I’m not sure if I’ve ever rolled as poorly…a typical example was having to take 8 armour saves on a 2+ and failing 4 of them…but repeating this 5 times a turn. 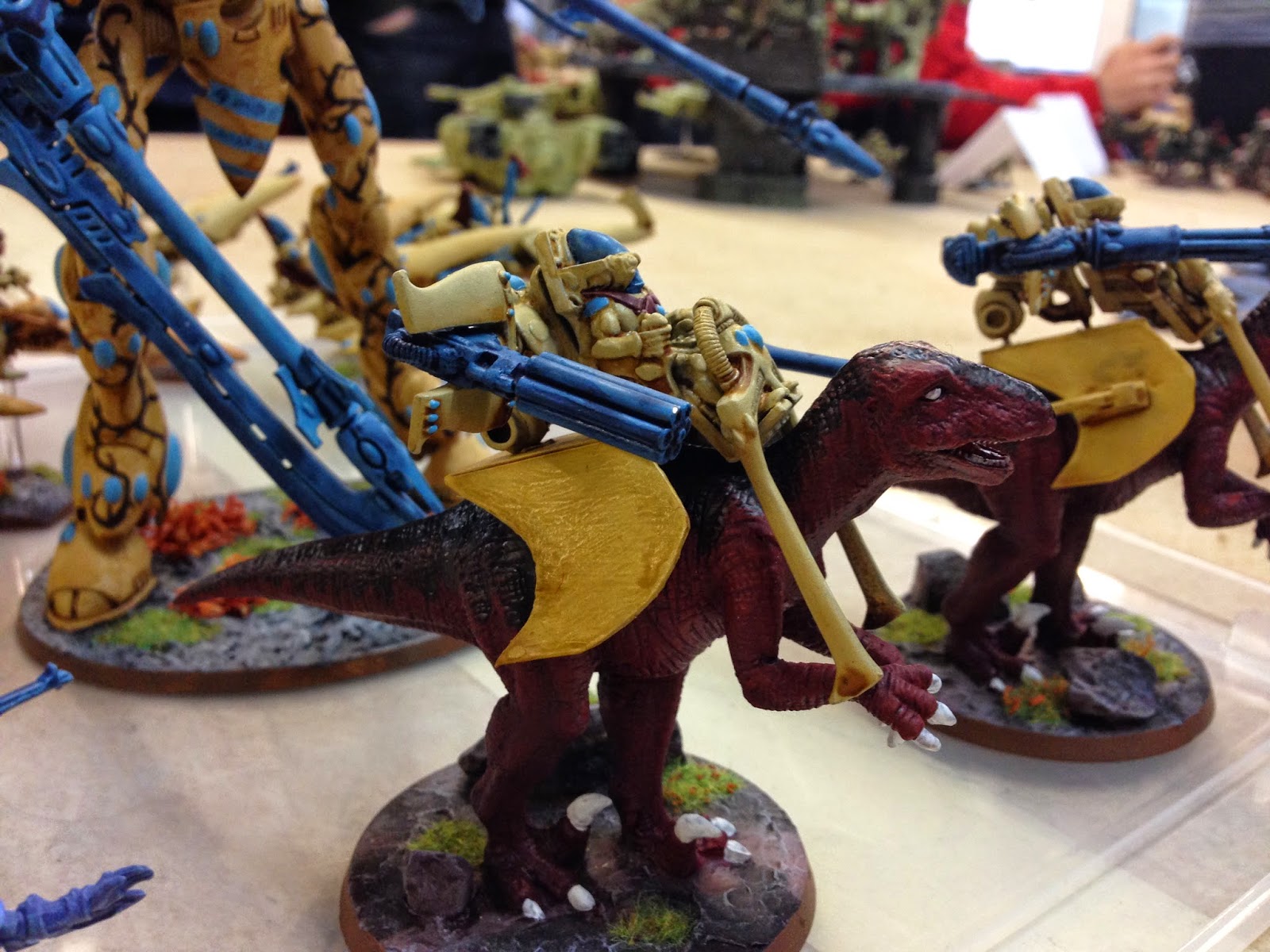 I think in the whole game I only managed to take out one Wave Serpent, kill the Jet Bikes and a few Guardians. There was a brief glimpse of light in Turn 5 where Grazer realised he has left his objective grab too late and I still had 2 Cultists on my objective and Abaddon (with 2 wounds) on his. If the game ended at that point, I would have still taken a 20-10 win. It didn’t and Grazer went on to table me the next turn for a 25-0 win.

Game 3
Moving back down to the mid-tables where I feel more at home I faced Ben Houghton with his Necrons. I’m not very familiar with Necrons, but there seemed to be lots of AV13 mech and lightening… The mission was capturing objectives to get a point each player turn and Ben managed grab first turn, quickly getting most of his army on the objectives ready to score from Turn 2. It was at this point I realised 7th Ed allows almost everything to score and my heart sank…I was ready to focus on his Troops to deny scoring and then go for the objectives, but wasn’t prepared to have to fight S3 Cultists through AV13 to get within contesting range. 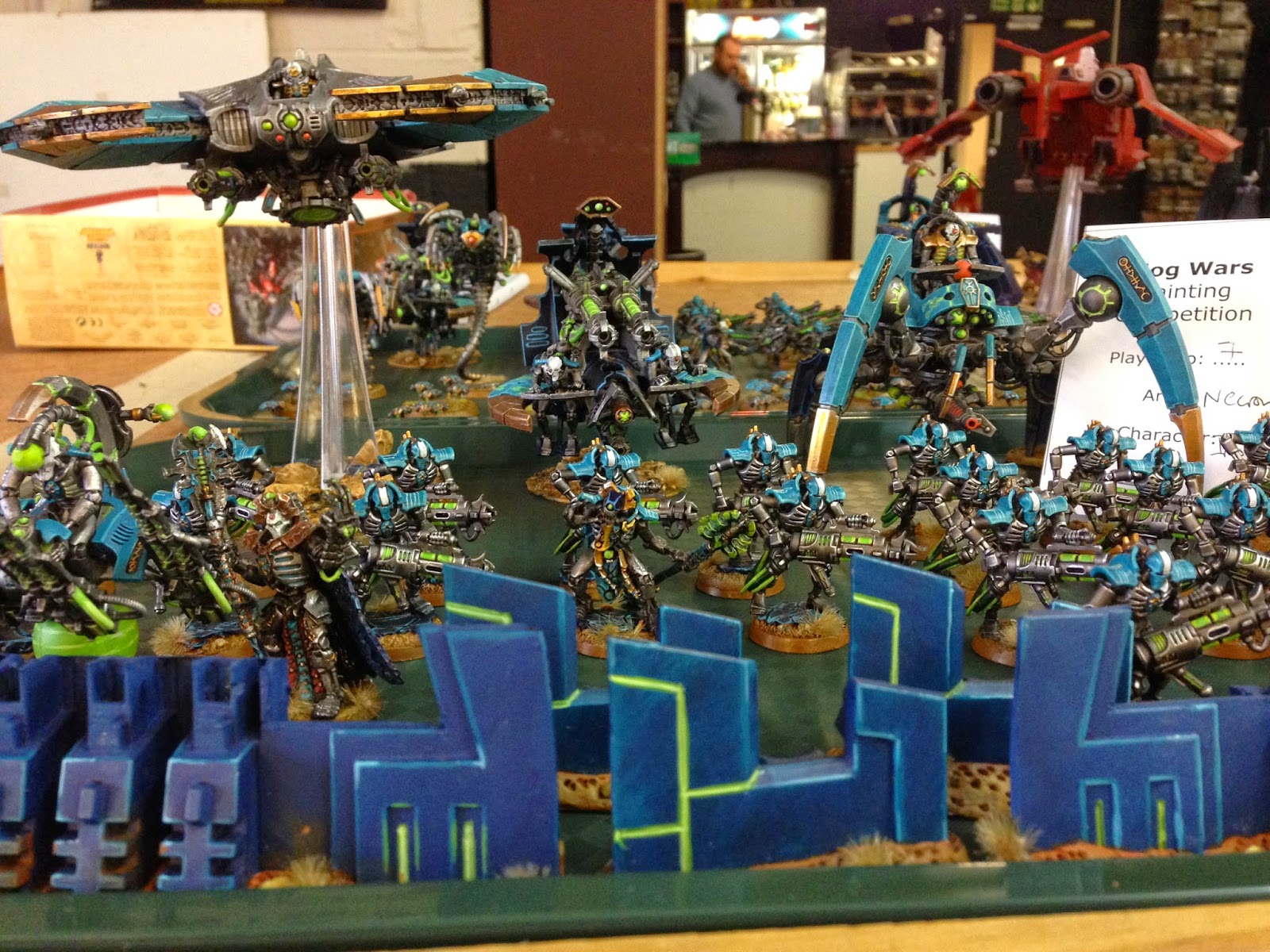 The game was a real slog – Ben managed to get some really lucky lightening rolls every turn and got night-fighting every turn, so even when I was penetrating his mech, he was claiming easy jink saves.
In the end my Obliterators were a star and helping soot and punch their way through a lot of his army, but by the end of the game I wasn’t able to pull back enough points and lost 13-8.

That left me in 15th place out of 26 overall – still mid-table (where I always expect to be), but not as high as previous tournaments.

Painting
There was a great standard of painting this year and to be honest, I am kind of glad I didn’t enter anything, because the same person won both the Best Army and Best Character prizes with a stunning Dark Eldar army. You might recognise his work from this beauty that LordH purchased from him. 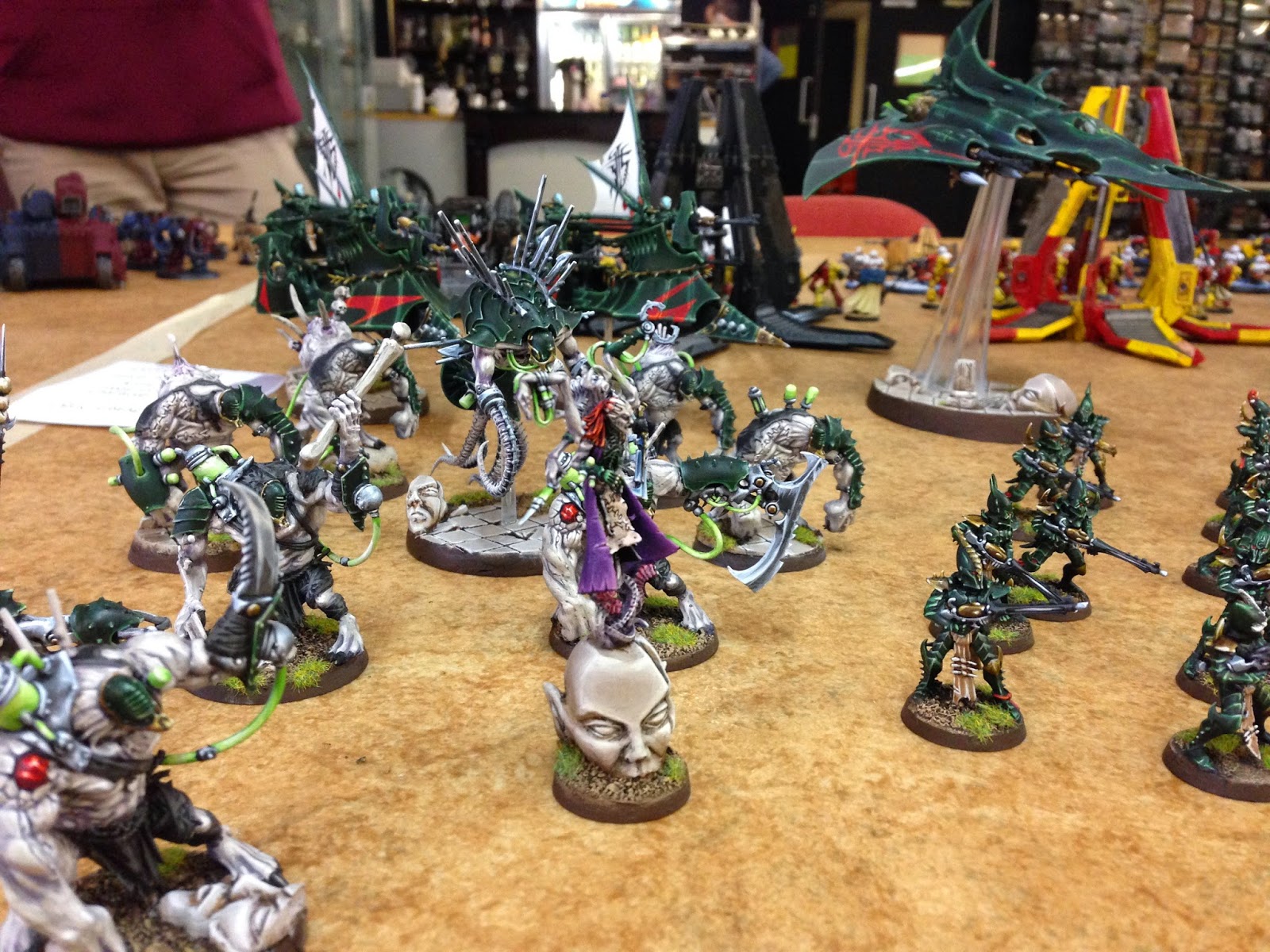 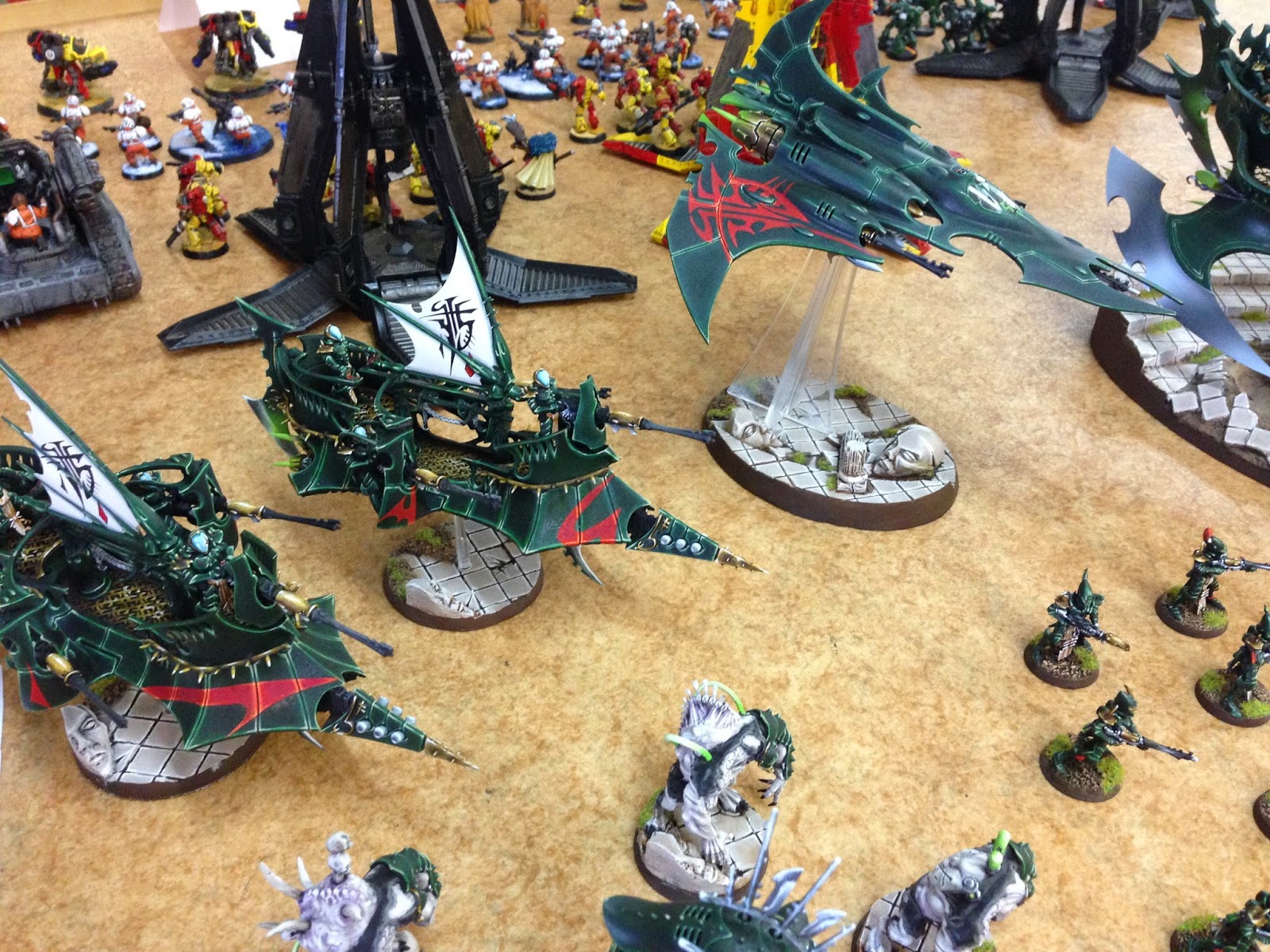 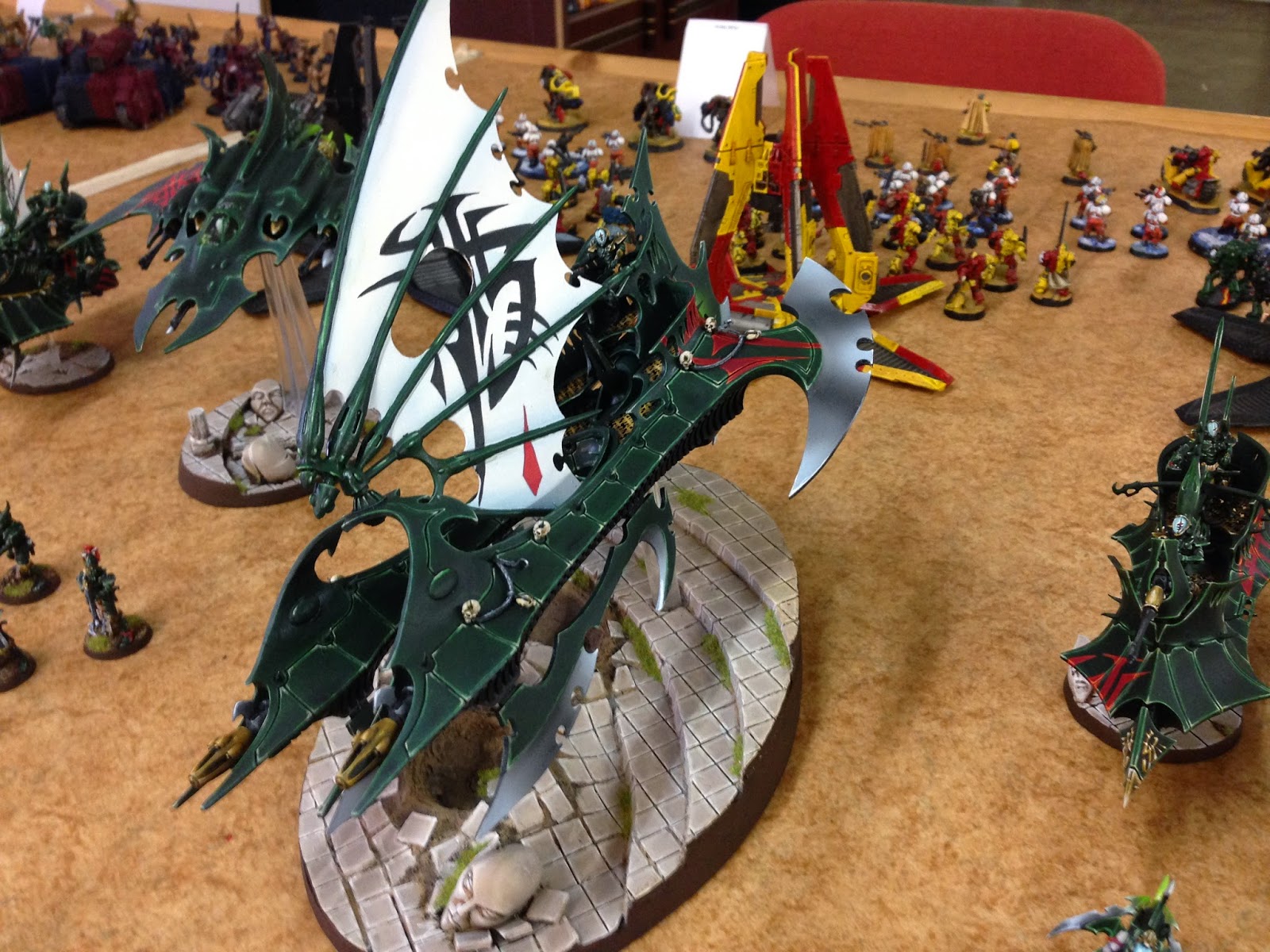 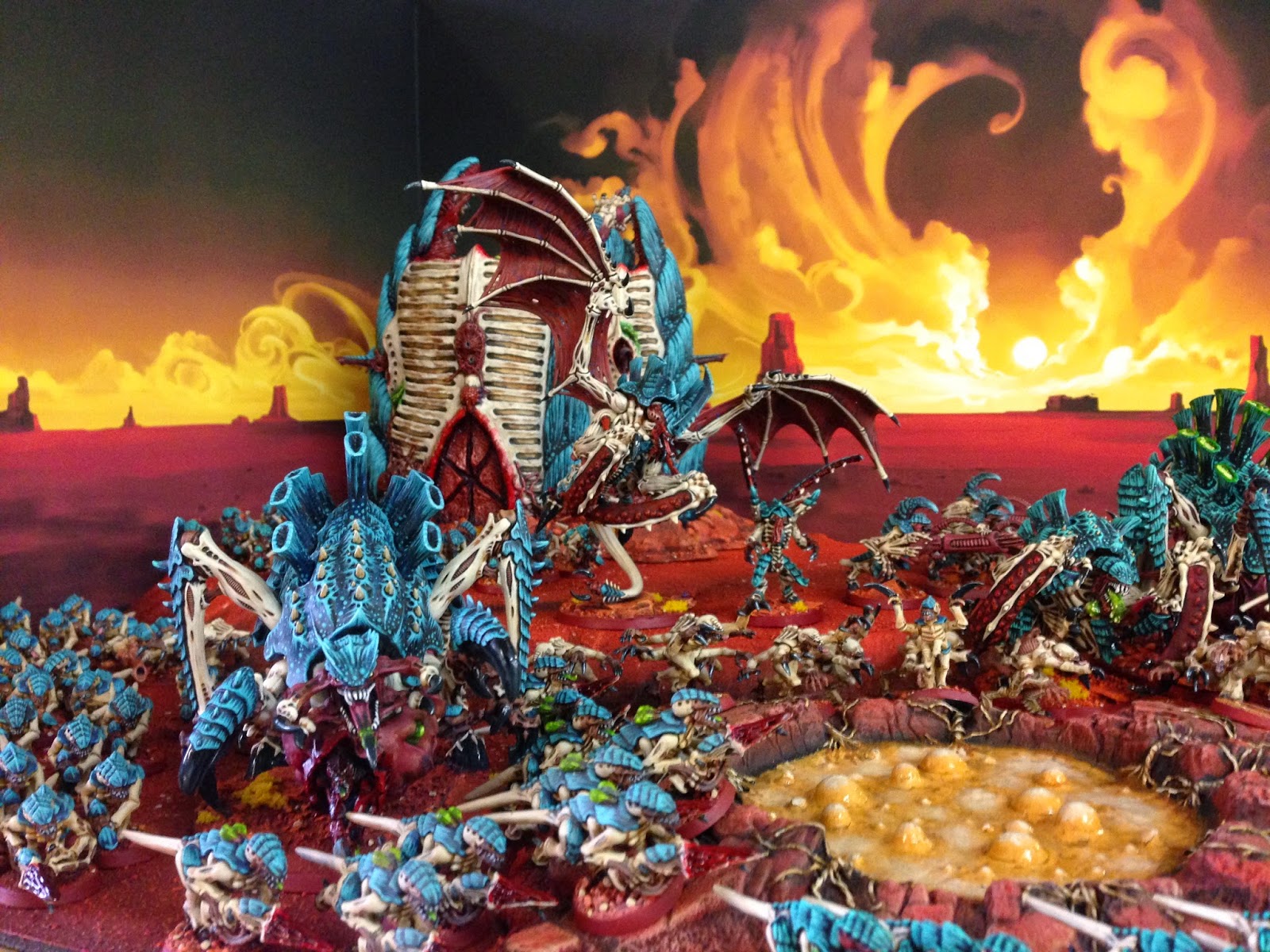 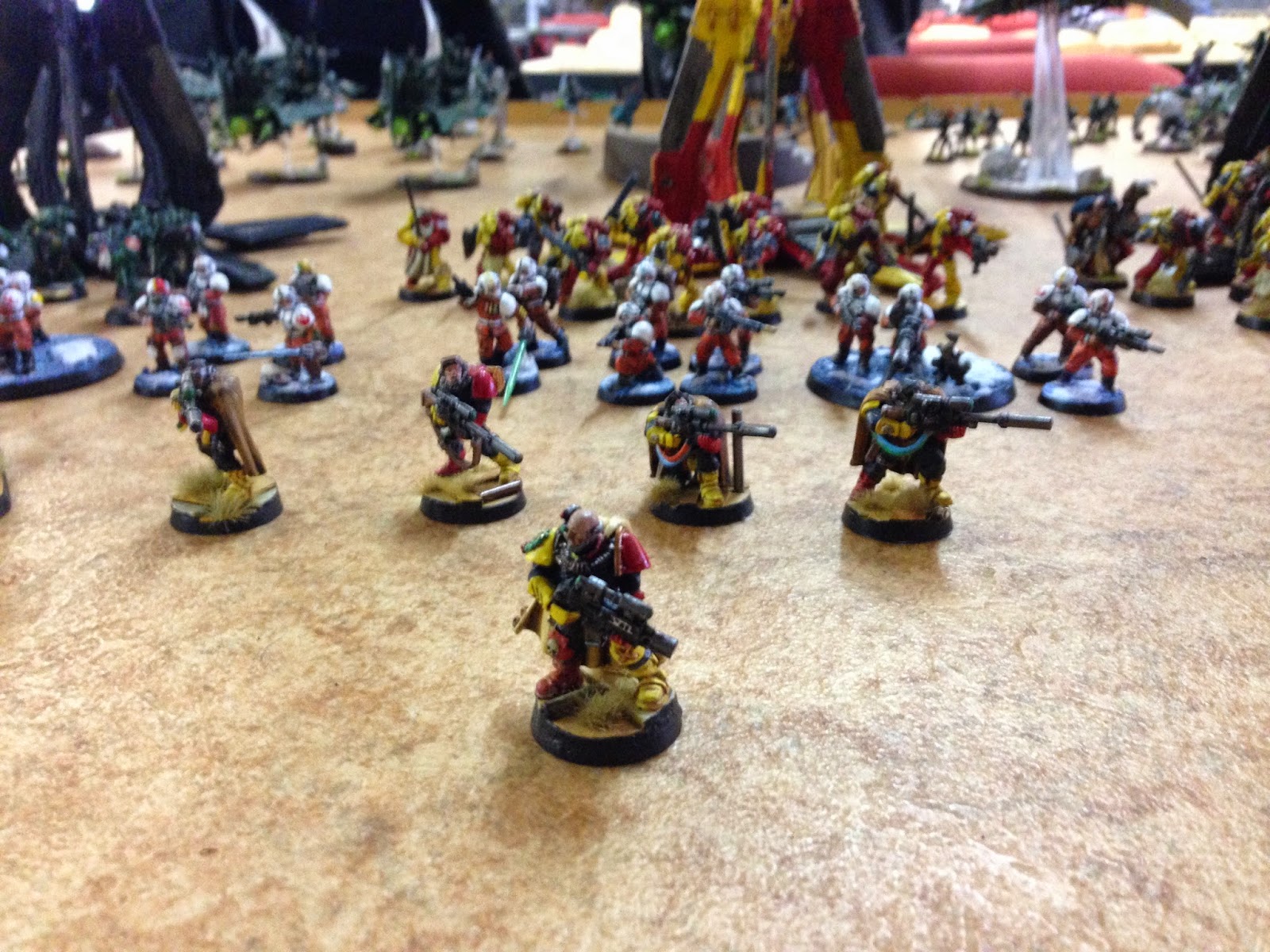 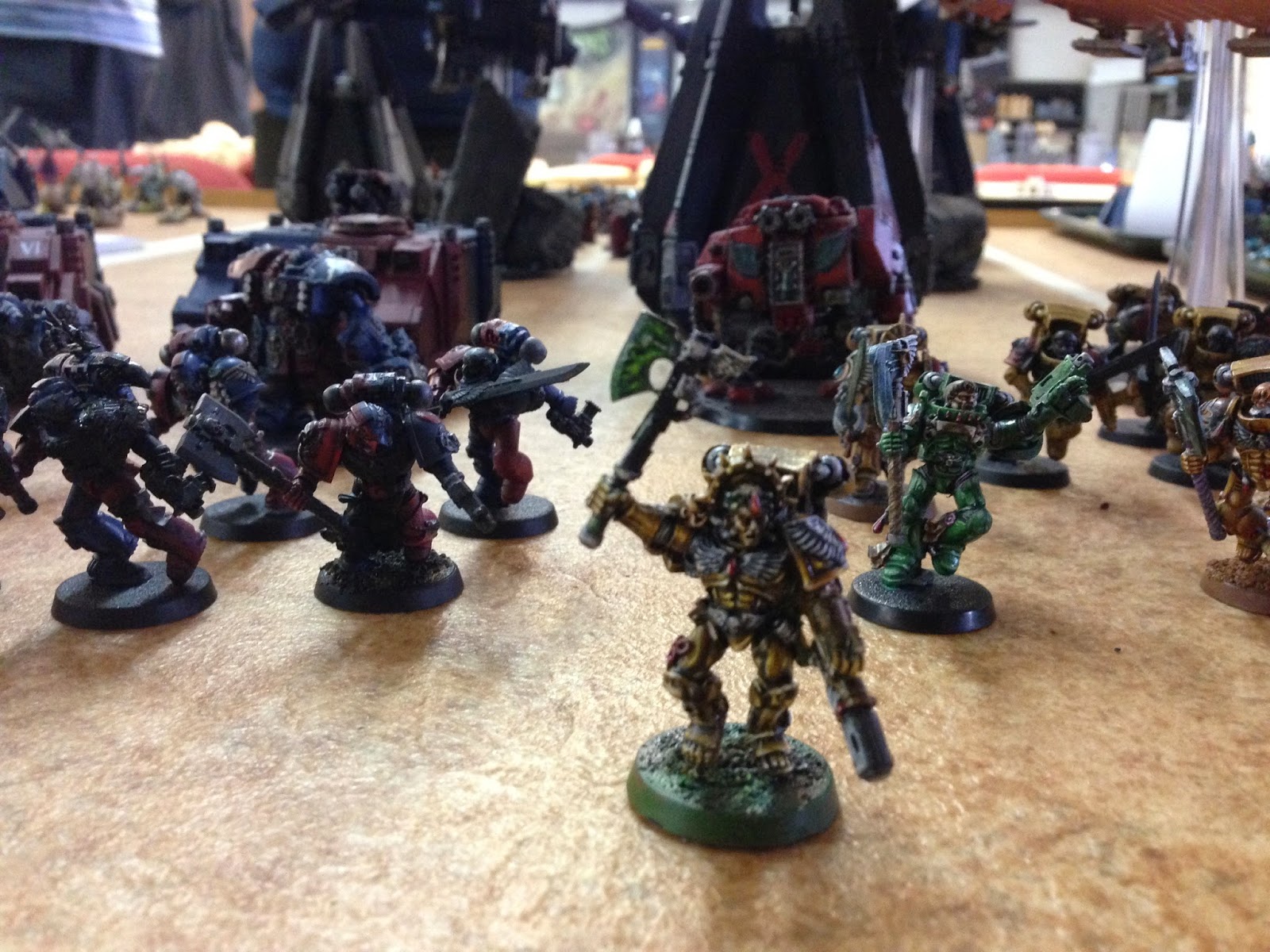 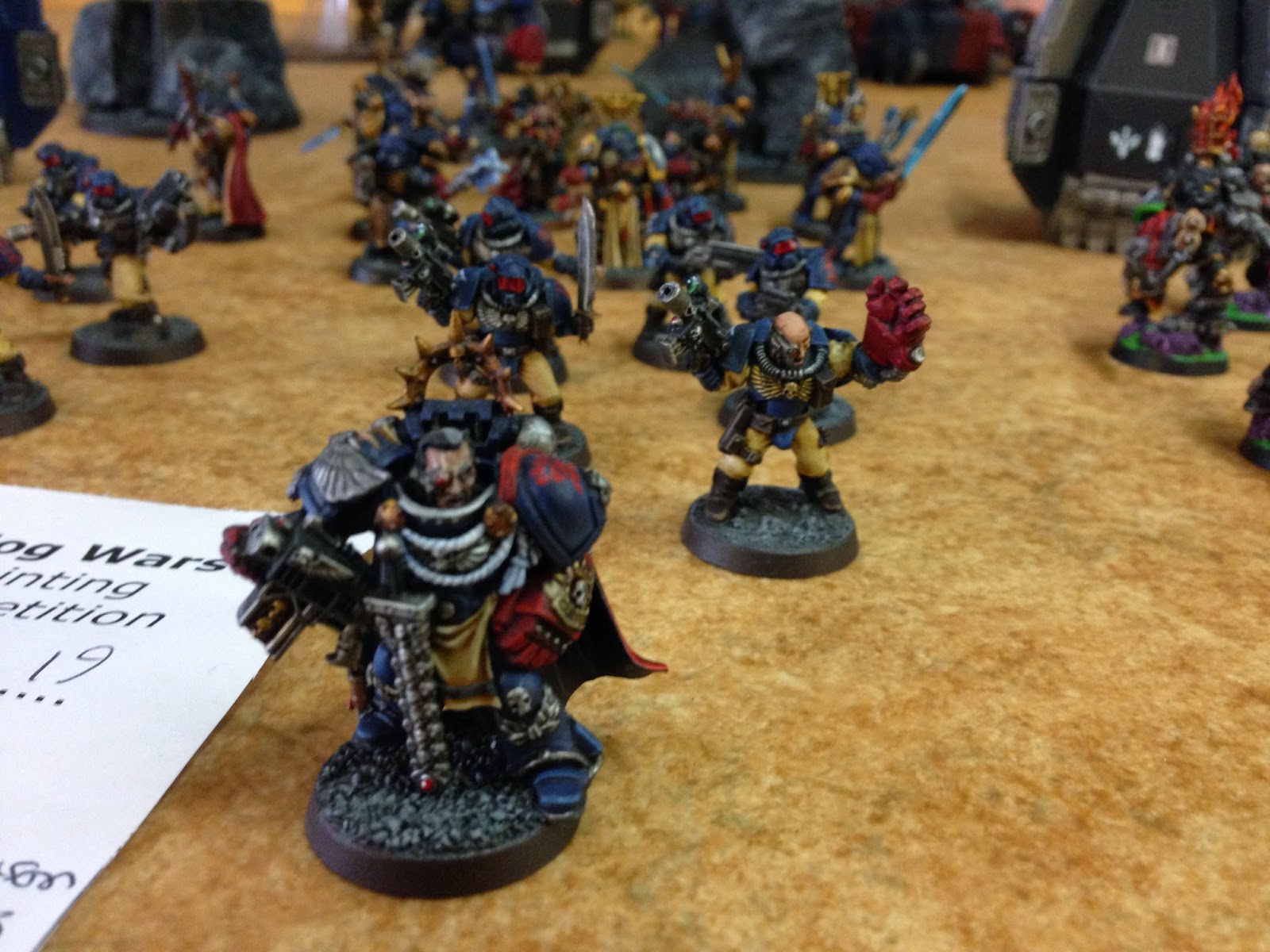 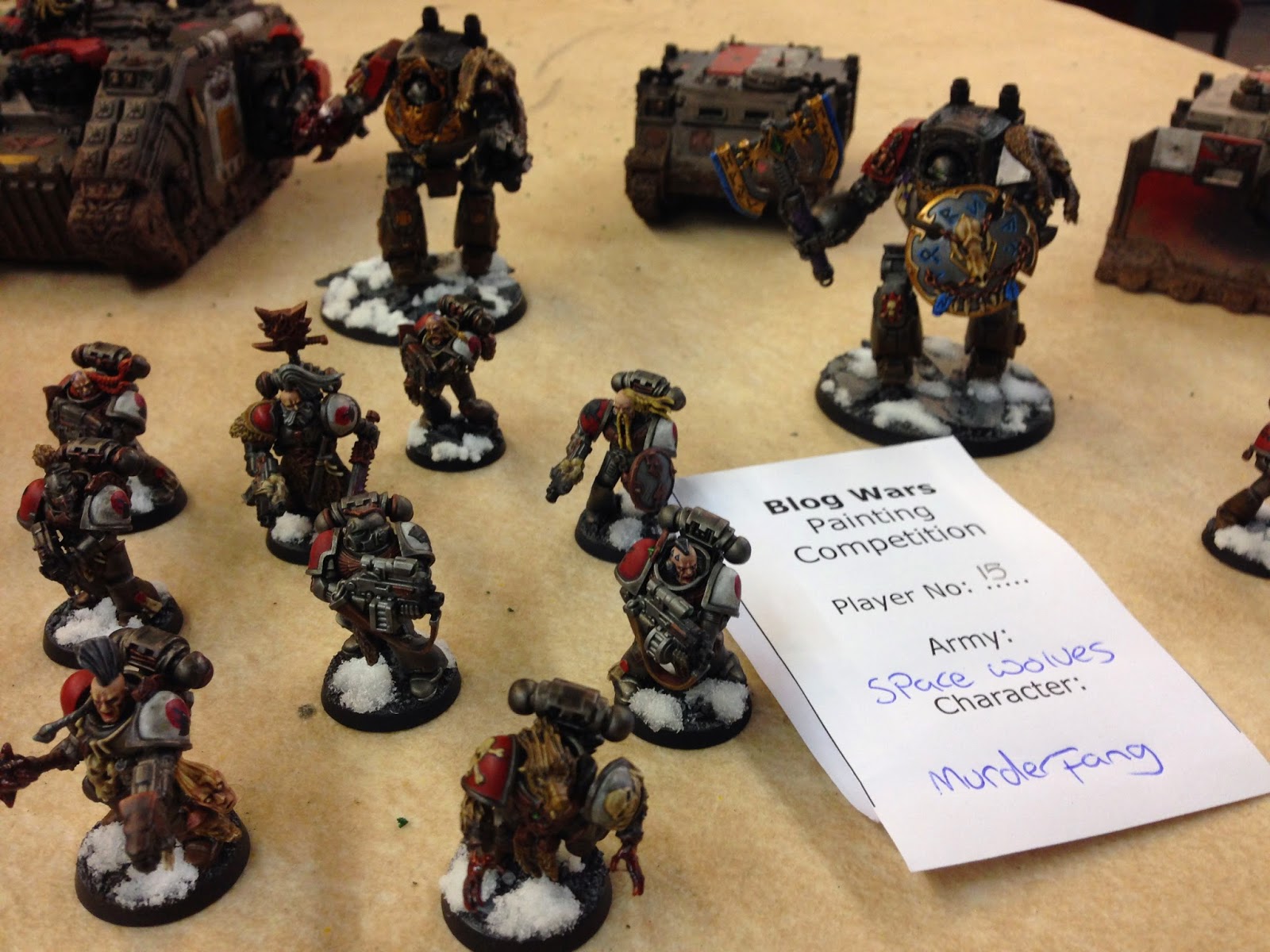 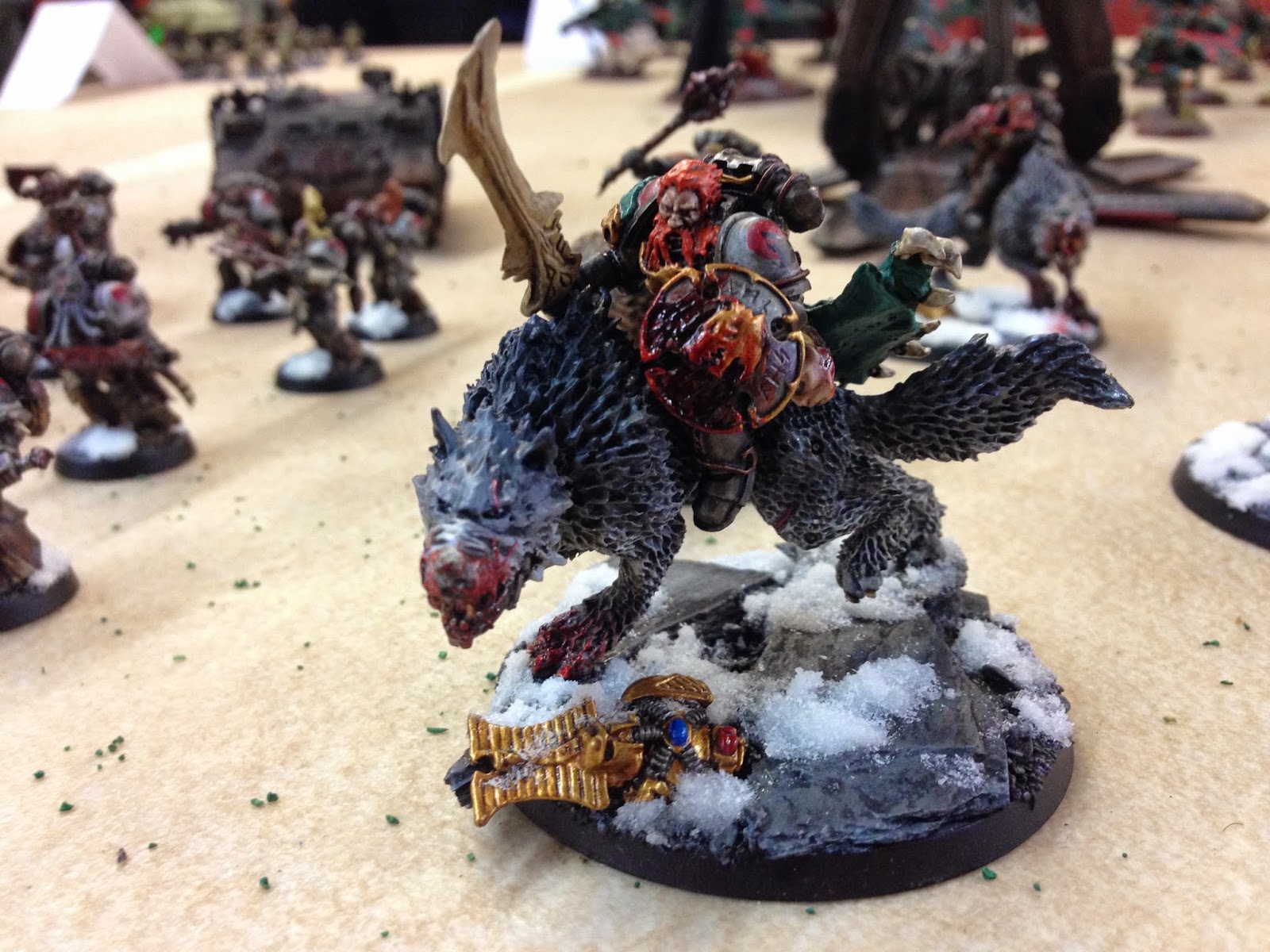 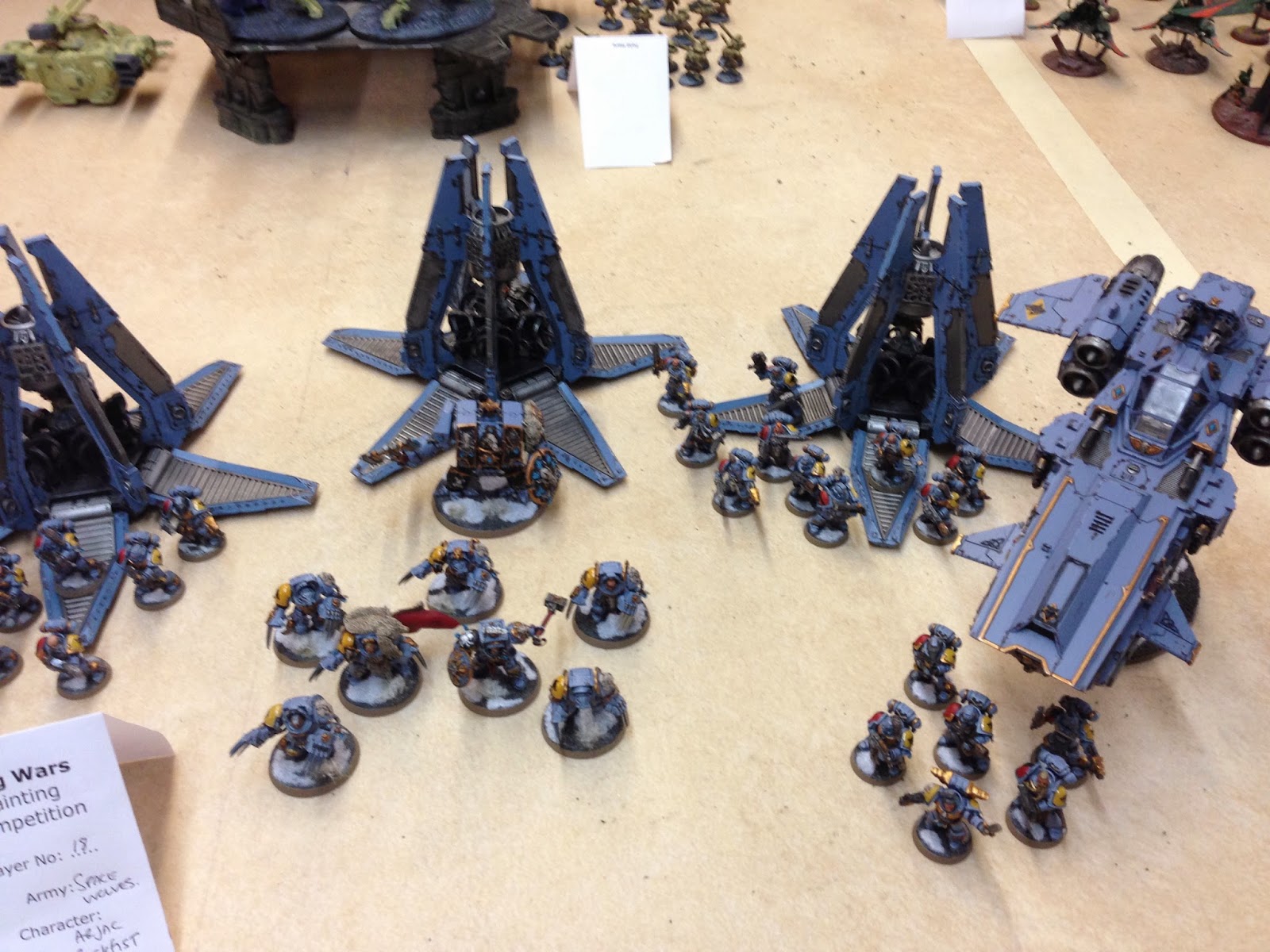 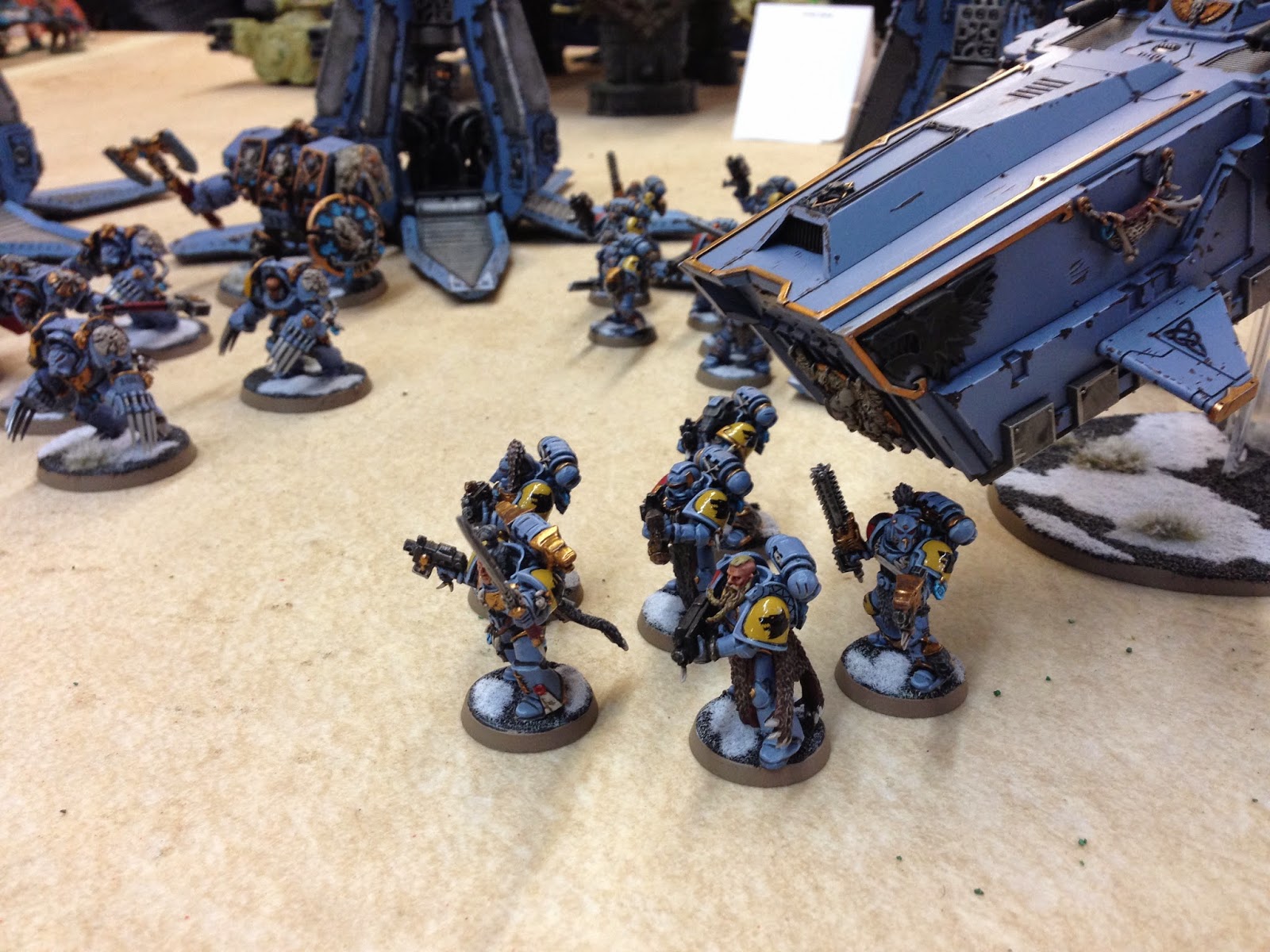 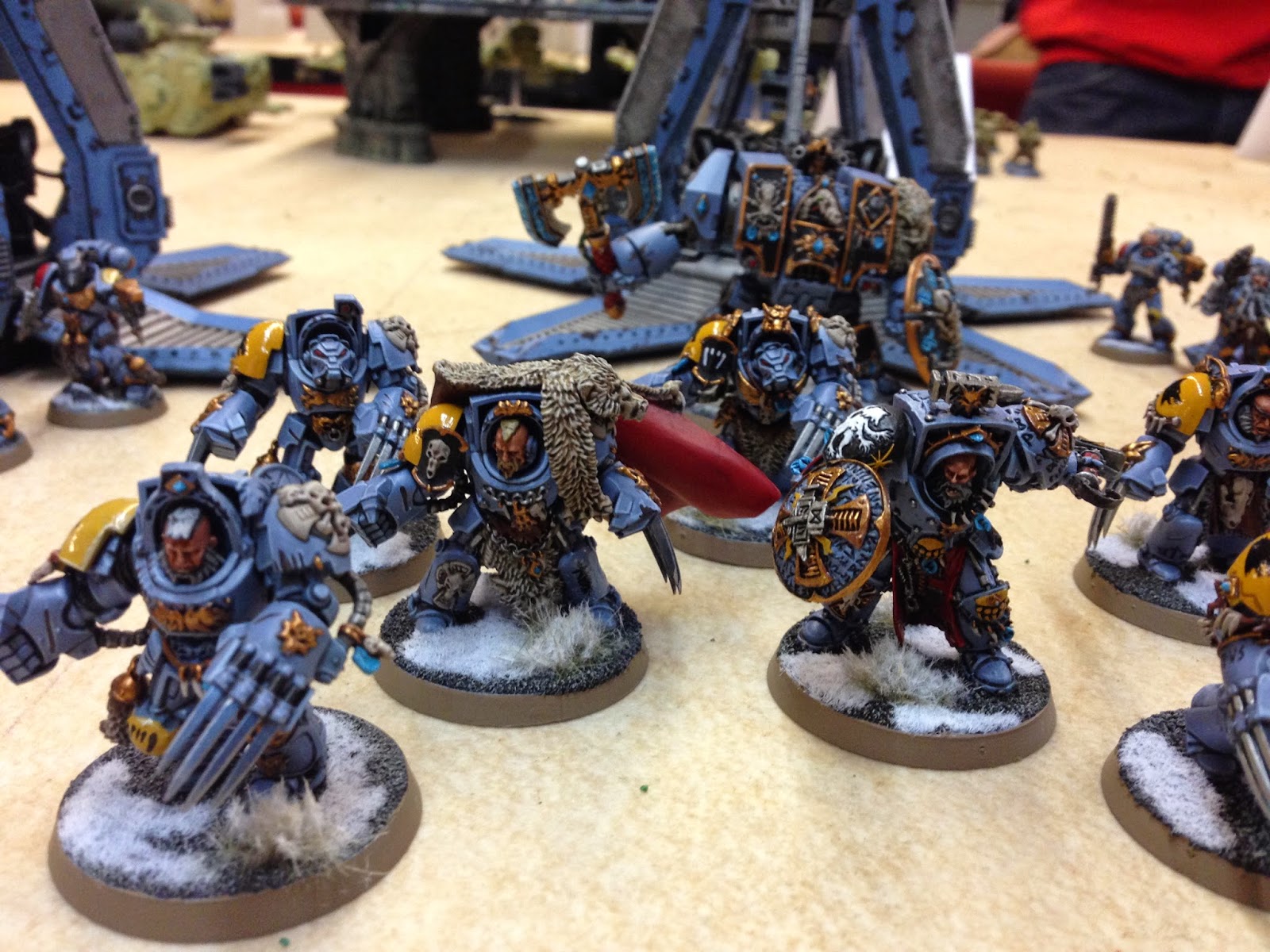 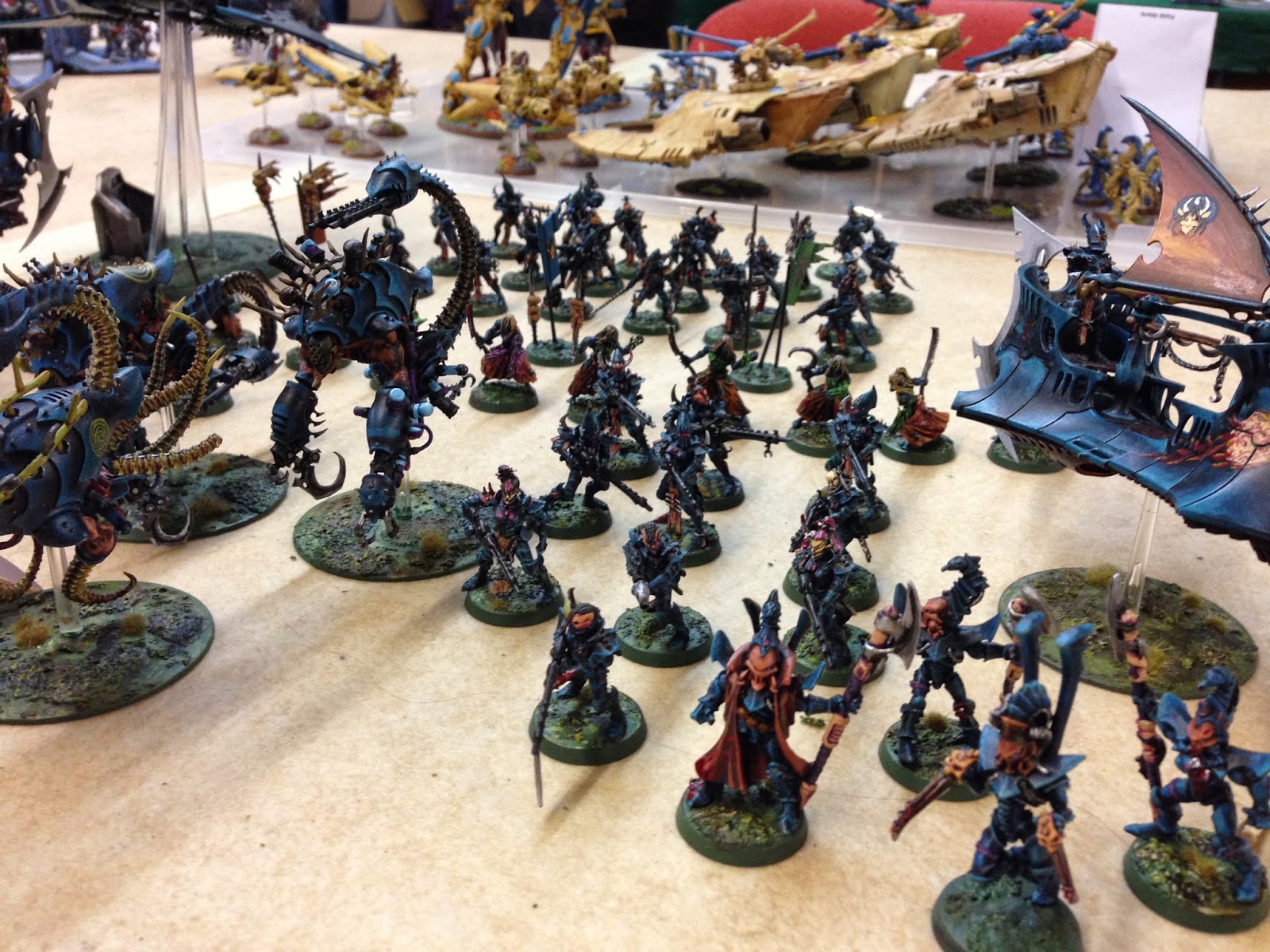 Overall
I went into BW8 with a general sense of malaise about playing 40K and to be honest, still felt it after taking a bit of a kicking in two games – but then I realised I was still playing 6th Ed – where Troops are vital. Now thinking about BW9 with the knowledge that scoring essentially doesn’t matter, opens up my army a lot more and I am already thinking about what I could take – hopefully some new toys…
Posted by the 6th degree