So – about a week into the Warhound project and I’ve made a good start. I have found a number of tutorials from various blogs which I have found really useful in combination with the FW instructions (which aren’t that clear by themselves).

Taken all of the parts out and laid them on my desk to make sure nothing was missing – not the easiest task because there are a hell of a lot of bits! I then grouped the parts together and put them in separate baggies; this means that everything is stored safely and parts shouldn’t get lost, but I can easily work on different parts at a time. 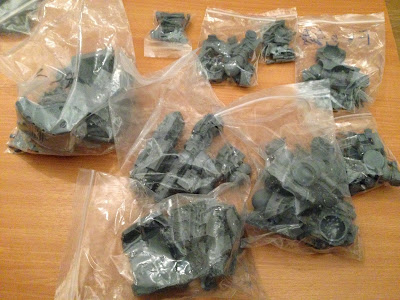 I’ll be starting from the ground up (although I will be talking about the base later) so cleaned any flashing or excess resin off the parts for the feet. I normally just use a pair of clippers and a hobby knife for this, but had to invest in a small hobby handsaw because some of the excess resin was almost an inch thick.

After cleaning the parts, I then washed them in some warm water using washing up liquid (Fairy to be precise…). I washed both feet to save time, but still kept them in separate tubs to make sure nothing was lost and after drying they went back into their separate baggies.

Then comes the dry-fitting. I took each part of the foot (no including all the pistons) and made sure they fit together without needing any more trimming. At this point I tried to keep each toe separate; there a 3 parts to each toe and although they are largely interchangeable, it would be just my luck to mix them up and find and ill-fitting combination whilst gluing. 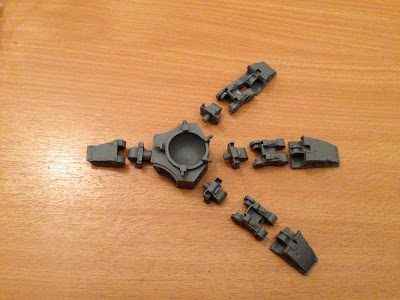 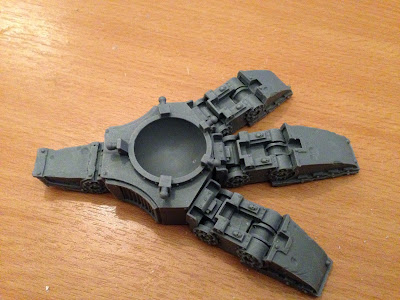 I decided that the first foot would be definitely be flat – it’s going to be load-bearing because the other foot will be posed more dynamically (although I haven’t decided how yet). I could therefore start building before I get the base built.

I drilled holes for pins in the part that connects each toe to the foot, but didn’t pin them at this stage – you are going to need to access some parts of the completed toe for pinning and greenstuffing (to tidy) which you simply won’t be able to reach if you glue it now.

First I drilled holes in the middle toe piece that connects both ends and allows articulation. I was tempted to drill a single hole all the way through and out the other side (so only a single pin was required), but there was a risk it would not be straight and be in the wrong position on the other side. Instead I drilled the hole through on each side and then glued the toe end into place. 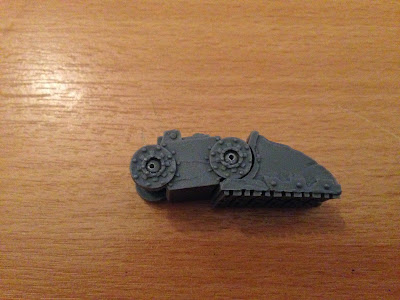 Once dry, I used the existing hole as a pilot to drill and place a smaller pin (covered in glue). I did this four times for each of the front three toes. Once pinned I then filled in the hole with a small dab of greenstuff. 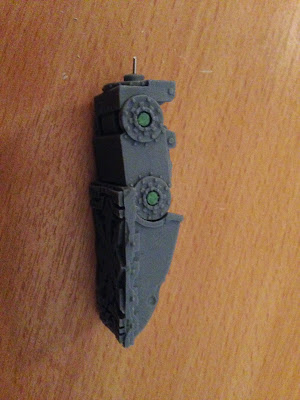 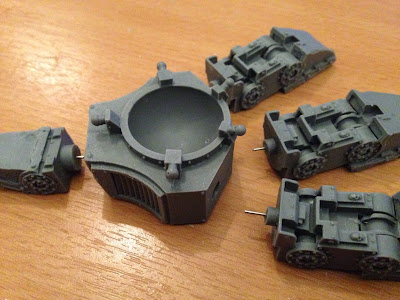 With each toe built but not yet attached to the foot, it’s time to attach the pistons. I was worried about this part as a lot of tutorials made it out to be the worst part of the build, but honestly, if you go slowly and measure before you cut – it is a piece of cake.

First things first, get the right pistons (there are a lot of different ones, so get them all out first and compare sizes rather than start cutting and be wrong – check out the scanned image at the top for reference). I started with the larger toe pistons first. With the foot in a flat position I found that the pistons required minimal trimming. Doing one piston at a time, remove it from the sprue being careful not to cut off too much of its length and then dry fit. If the piston requires trimming – do it slowly in small increments. Eventually you will get it to fit and then it’s a case of doing it again, but this time with glue… 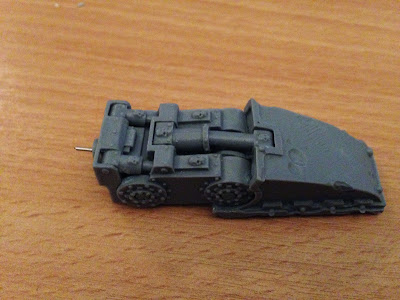 The smaller pistons are easier as they are in one piece. Again – carefully remove the piston from the sprue and dry fit it in the toe (with the end of the piston above the housing – it wont fit inside yet). You want to cut it a few mm’s long because the end slides into the housing. Dry fit again before gluing to be 100% sure and then go for it. I found a pair of tweezers useful at this stage.

After a few pistons, the rest get pretty easy.

Once each toe was complete I went back to the end that connects to the foot and fitted a small pin temporarily with a dab of paint on the end to mark where it meets the foot. I then drilled out that hole, replaced with a longer pin and glued in place.

The rear toe is much easier in comparison and only requires a little drilling before it can be fitted. 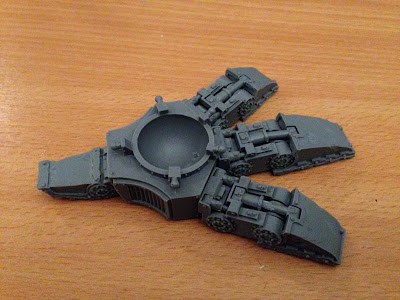 Depending on how you are going to have your Warhound standing, I think it’s debatable whether the toes even need pinning with the foot in this position; I use Loctite Precision superglue which very rarely fails me and if you are placing the foot flat, the weight of the titan will be on the pad of the foot and not the toes…but it’s better to be safe than sorry I think and if you are ever going to spend time to build a model properly, it’s going to be on a titan.

Now I have a single foot complete – but I will need to work on the base before I can start building the next one, so I think my next steps are going to be split between the base and making a start dry fitting the torso (as the interiors are all going to be painted before it is built).

More updates to come soon!
Posted by the 6th degree