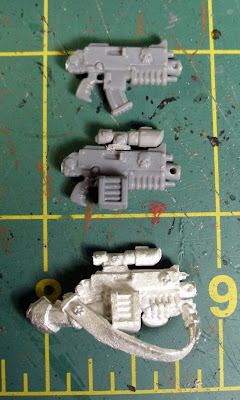 Continuing my Sternguard theme at the moment, I saw completed versions of these on a friends Photbucket album and thought I'd have a go at it. Really simple effective conversion for upgrading your plastic marines to Sternguard or Characters. 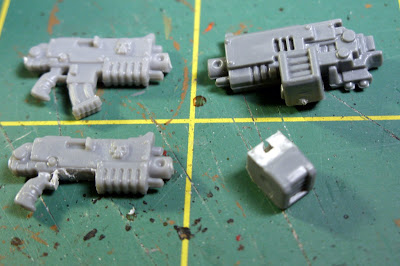 Simple cutting and filing the Rhino Vehicle Accessory Storm Bolter, one gun will give you two magazines. Remove the normal magazine as shown and glue. Scope is from the SM Tactical Weapons Sprue or even the AOBR marines.

Kantor Base was asking about conversions to make some sternguard, hope this helps. Just add some suitable bits from the Black Templar Upgrade box, Dark Angel Veteran Box, Chaos SM Box, Command Squad box or even WFB Chaos Marauders box (I've used some cloaks with a notch cut for the rear of the marine torso - WIP, complete soon. See my other Simple conversions: Combi-Melta or Vehicle Storm Bolter. Hope these help.
Posted by Siph_Horridus