Prior to the battle report, I had a free weekend for some hardcore painting, and modeling... time for reinforcements!

To add to my force, two Rhino's were added, I need to finish the models with transfers and the tactical markings on the back, however rain prevented me from spraying the markings on them. I also need to add a storm bolter to R2. I was going to add a hunter killer missile, however a storm bolter is standard on the Rhino, - this will be done over the weekend. 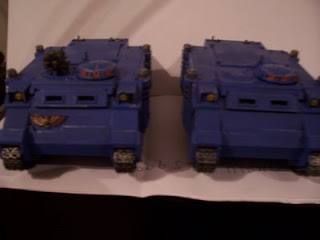 Next up is a predator armed with the tank hunting annihilator patten. The marine on the turret has been converted to allow the storm bolter turret to rotate. Originally I was going to paint the marine red, as his left shoulder pad is a mechanicus symbol. After consulting sergeant Chronus profile it hit me that some tanks would be crewed by 'normal' space marines. Within the character profile it cites that there are 50+ marines within the armoury, so why not have a squad designed to operate all armour vehicles? -Thus tread head marine was born. The mechanicus symbol was painted bronze to identify the marine as a 'tread head'. ( i like the idea, I hope you guys do to!!) 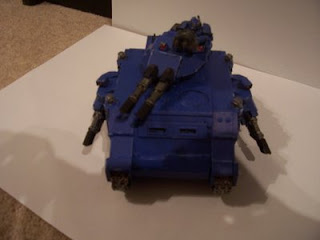 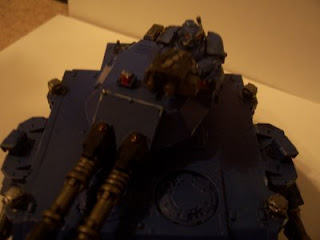 To add to the Rhino's, a second drop pod was built, and painted. The model requires the doors to be finished with the yellow/black chevron combination. I've got a third sat waiting to be completed! I love the idea of having a company drop podding into battle, the fear of facing 1 is scary enough.. but 9??? Geezes. 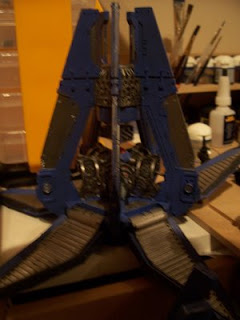 Also I've added pictures of my other projects carried over from my marathon of modelling, I built up my Forgeworld Ultramarine Venerable Dreadnought and Chaplain Dreadnought. I've converted the base of the Venerable Dreadnought so that he is stomping onto a Tyranid warrior body, the positioning of the model is aimed so that it appears that the unfortunate Tyranid has been blasted by a plasma-cannon (its going to leave a mark, for sure... medic!!) The Chaplain Dreadnought is armed for close quarter combat. A Multi-melta for the tougher opposition and a power fist/flamer combi. I've gone for the MkV style arm, I feel it fits with the style of the model, it is the same size as the melta arm so he doesn't look 'wonky'. 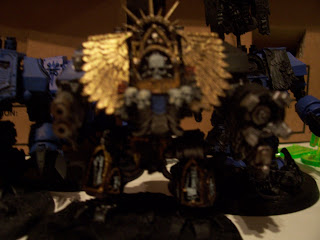 As you can see the Dreadnoughts have good company. I really need to crack on and finish all of these dreads!! 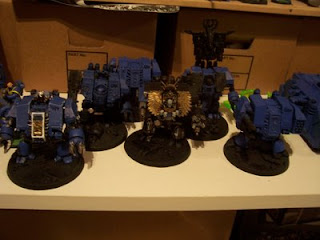 Also added is a picture of my Assault Termie's, they were awesome in the battle report again against Siph. The sergeant is based on the Lysander model, with the Imperial Fist icons filed away, I like the idea of having veterean sergeants (especially the 1st company) looking venerable with their armour covered in honours - almost looking like a captain. (these guys are pretty much one step from becoming a captain). These guys will be getting a fresh lick of paint, and basing. Once done I'll show you the results!! 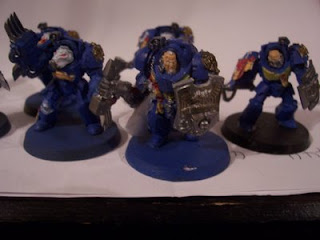