Porn-Star-Jedi and myself got together for a pre-cursor warm up 750pt battle before a bigger one later in the week where this result would somehow benefit the victor for the 2nd battle, however, events prevented the later battle so this one was the only one. Nevermind, a little twist to the Scenario and we are away...

##//### Transmission begins...
...Unconfirmed reports have indicated that an unknown power source has been detected in the abandoned wreckage that was once Zevas IV. Gideon Lorr has requested a force of the Emperors finest Ultramarines to investigate the area.

One of his aides made planet fall, however no reports and no contact has been made since.

It is believed a battle unit of Relictors is in the area moving towards the power source, adding to the rumours that the power source is from an unholy chaos relic, or artefact.

Ultramarines are requested to find and escort the aide, and destroy the unholy icon of chaos... at any cost. ###//## Transmission ends.

The forces were roughly Relictor - Chaplain + Assault Sqd, 2 Tac Sqd and Landspeeder, Rhino and Drop Pod. Ultramarines - Chaplain + Termie Assault Sqd, Combat Sqd, Scout Sqd, Tac Sqd and Drop Pod and a Vindicare Assassin. (Points totalled 760pts Relictors, 860pts Ultramarines (Porn-Star-Jedi claims he forgot about the Assassin!) Nevermind...
To go with the scenario, the Engineer had the Relic. He would move D6 inches in Scatter Dice direction at the beginning of each full turn. If one of us was within 2in of Engineer uncontested we would claim escort. Relictors had to claim the Relic, Ultramarines escort and destroy it. 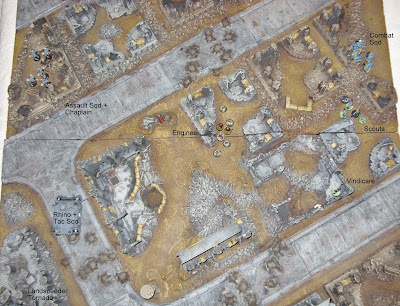 Turn one saw the Landspeeder cruise toward the Vindicare and shoot with the Multi-Melta, the Assassin ducked aside with ease. The Rhino containing the Relictor Tac Sqd sped forward and the Assault Sqd and Relictor Chaplain launched forward using the Jump Packs but remained in the hard cover of the ruins. The Ultramarines Combat Sqd and Scouts ran forward toward the Engineer, who seeing the bright lights of the Rhino ran toward the Relictors - bad idea! Drop Pods and Termies in reserve. 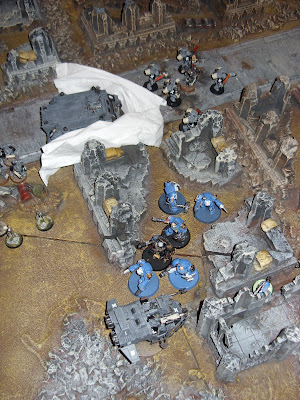 Turn Two - Termies arrive and Landspeeder closes in for kill

Turn Two saw the Ultramarine Termies arrive with the Termie Chaplain, the Scouts moved forward toward the Engineer. The Ultramarine Combat Sqd had a shot at the Landspeeder but missed. The Vindicare shot the Relictor Chaplain taking a wound. Relictors disembark from the Rhino near the Engineer, Assault Sqd closed the distance between them and Ultramarine Combat Sqd and the Landspeeder combat moved to Heavy Flame the Scouts killing 3 and Multi-Melting the Chaplain Termie taking a wound (Rule error - after we realised this should have killed him). The rhino popped smoke to prevent getting Multi-melted the next turn. 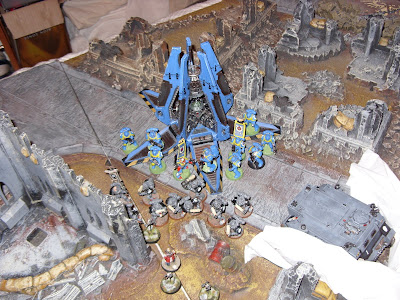 Turn Three saw the Ultramarine drop pod arrived to harass the Relictor Tac Sqd killing one and the Termies moved toward the Engineer. The Vindicare and Scout Heavy Bolter shot the Landspeeder, shaking the crew. The Relictors surprised by the Drop Pod turned and assaulted the new arrivals joined also by the Relictor Assault Sqd killing only 4 Ultramarines (poor dice rolls). The engineer was now free to move again. 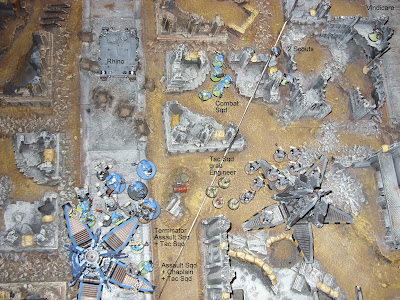 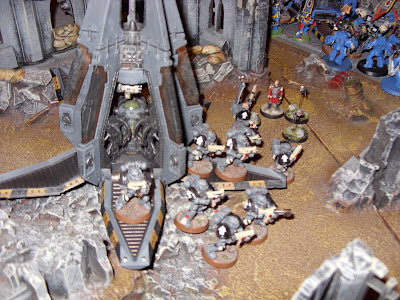 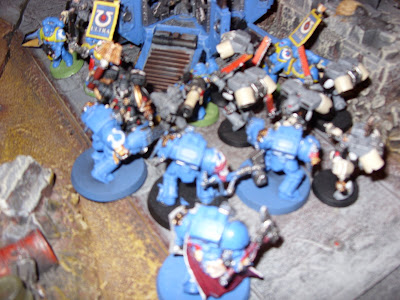 Turn Four saw the Termies joining in the melee around the Ultramarine Drop Pod, both Chaplains fought hard but the earlier damage to the Terminator from the Multi-Melta gave the Relictor the upperhand and he fell the Ultramarine priest, but not before 4 other behemoths stepped up to the fray, smashing the Relictor Assault Sqd and causing them to flee. The hard pressed Relictors saw the arrival of the Drop Pod and claimed the Engineer once again, firing everything they had at the Ultramarine Combat Sqd killing 3. The landspeeder sped away to recover. 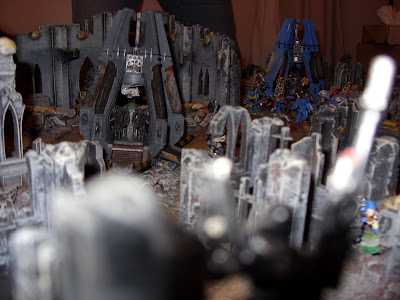 The Vindicare looks on, choosing his next target.

The Assault phase in Turn Four was the decider, the surviving Ultramarines from the Scout and Combat Sqd charged the newly arrived Relictors, contesting the Engineer. In the assault, bad dice rolls on both sides prevented the all important loses and both sides remained locked. Darn... The Chaplain and Terminators remained locked in combat and the Engineer was left free to roam, no one holding the objective and a draw. 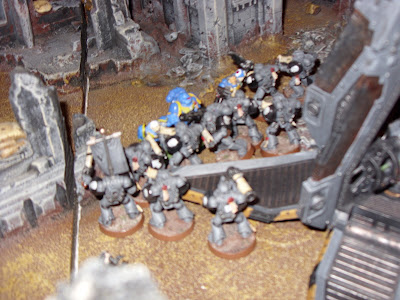 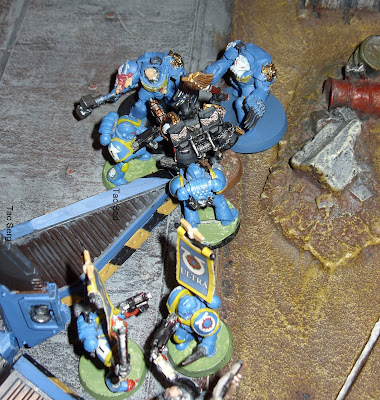 The Chaplain holds on by the skin of his teeth... 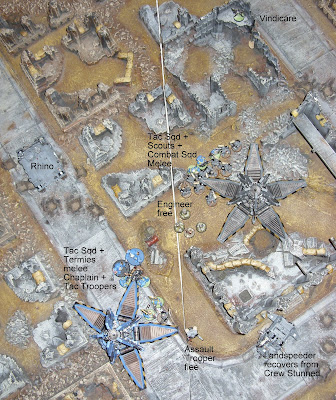 State of Play at end of Turn Four

From a Ultramarine prespective the battle had lots of twists and turns, drop pods are quickly becoming on of my favourite units. Simply having these bad boys sat waiting to deploy is a great feeling, and also fearful if you are on the receiving end! Special mention has to go to the Assault Terminators, who's goal was to slow the assault marines and tactical sqd. The assualt was bloody, and casaulties were high. Things would of been different if we had a 5th turn.