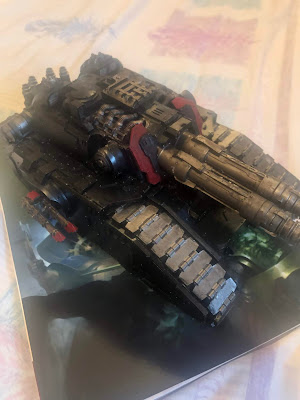 I thought I'd share a 'small' project I was working on for a recent battle at Warhammer World, a Space Marine Relic Falchion Super-Heavy Tank Destroyer. I had the kit for a while, but hadn't pulled the trigger to add this to my Ultramarine force (TBH I had fallen out of Space Marine love since the Primaris drop...) With an upcoming battle knowing that there would be superheavies on the board, I opted to get the model built and painted, and added to the Chaos ranks (now that was a surprise!) (Hmm...yes a Deathwatch Falchion on the Chaos side was LH... Siph) 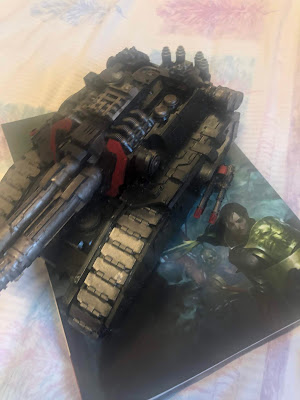 The model stat wise is a beast, and with my Daemon force allying up with 6thDegree's Iron Warriors, adding an extra unit for long range fire - as all of my Daemons would be foot slogging across the board under major fire. 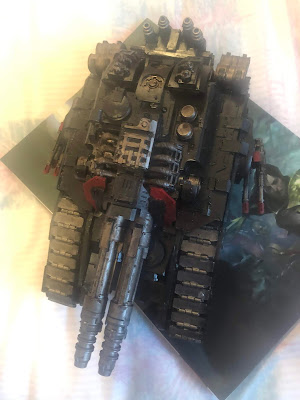 The tank when together well, other than the tracks which were a nightmare to position. The tank was then painted with a metallic black finish, with details picked out in red. To complete the Relic Falchion Super-Heavy Tank Destroyer it will be getting a few dry brushes to add depth and detail and some silver panels to then add the Deathwatch symbols to. 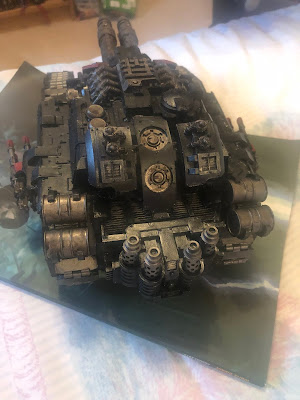 Really happy with the unit so far... (and yes, it did a lot of destruction in the battle)