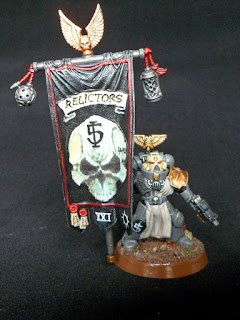 Hello Readers, thanks for dropping by to our humble corner of the blogosphere. Today I'd like to show off my latest addition to the Relictors 5th Battle Company and the Command Squad. The previous members of the Command Squad can be seen here Veterans and here Apothecary. The large number denotes 5th Company, as does the Black colour. Not sure why I chose XXI as these were not from the 21st Cursed Founding, the Relictors were formed from the Fire Claws Chapter, one of the Praeses Chapters raised to defend the Eye of Terror, maybe I got confused with the Fire Hawks (who became the Legion of the Damned)... lost to the mists of time, ha ha. 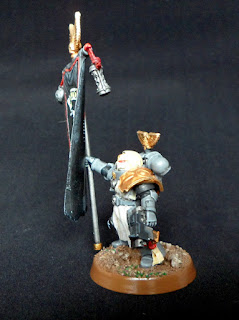 I bought this torso years ago with the intention of using him for something fitting and special, his tabard was made of greenstuff (by someone else) as was the ornate gold shoulder pauldron. I painted these following the gold tutorial on WHTV by our liege Duncan. I really like Retributor Gold and Liberator Gold. 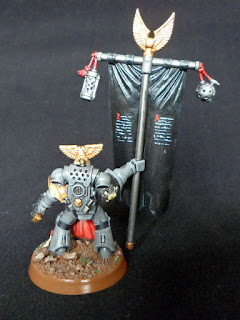 The censers where from a Dark Angels upgrade sprue I think, that or Black Templars? Fitting as the geneseed is from Ultramarines and Dark Angels originally. Like the Veterans (or is that now Ancients?) with Storm Shields I adorned his power pack with an Imperial Aquila. 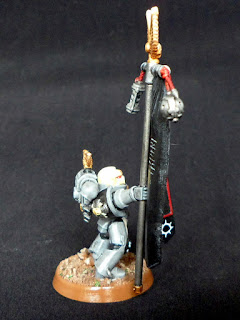 Fittingly I added a Terminator Honours shoulder pad to denote his status and worthiness to uphold the Company Banner! I think the skull motif on the banner was cut out from an early White Dwarf or Space Hulk supplement... it was printed out and sealed to the plastic banner, its been years in the To-Do pile so I can't really remember. 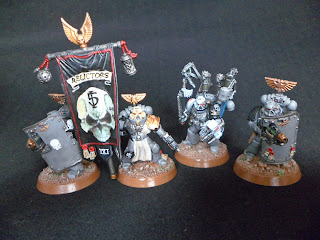 So, the obligatory shot of the Command Squad so far, getting there... means I now have just one member to go until I can call the Battle Company complete! Just one Company Champion to do, not that the Battle Company is not expanded beyond just troops and transports! See the whole Company and Armoury here, taken last year. 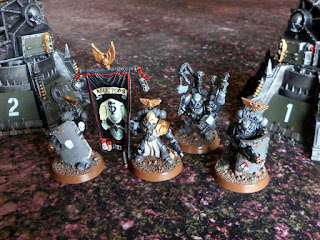 And a shot of them on the battlefield. Cheers for dropping by, Siph.
Posted by Siph_Horridus