Hi one and all!

Thanks for looking at our Blog!

Just a post on my WIP Leviathan Dreadnoughts, when 1 isn't enough, go for 3!

I really like the look and feel of these HH models, they look how I image dreadnoughts would look- massive, chunky and deadly! I opted to have one true shooty Dread, one for close combat and the other a mix of the two.

Up First, the Mix dreadnought, armed with the Cyclonic Melta Lance, and Siege Claw, I've switched the feet around so this one has two 'running feet'. The missile rack is to be added, plus transfers and line highlights and base. The model (and other 2) appears to be 'too' blue- I think this is that the base isn't done yet. 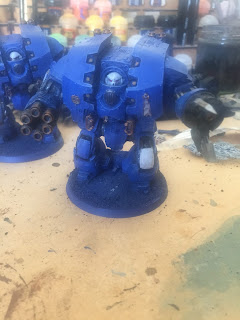 Secondly, the shooty dreadnought- armed with 2 Storm cannons. This model has the 2 'standing' feet, which I think helps with the pose. To complete, same as above with transfers, missile rack and base. 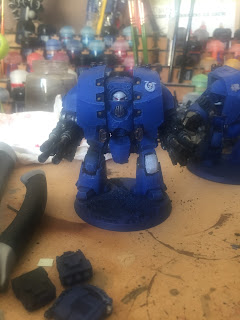 lastly, the Close Combat beast- armed with a siege claw and drill, the pose is meant to be in the middle of combat. To complete, same as the first two. 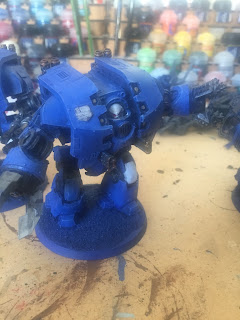 By working on all 3, I've managed to get a uniform blue across them, and am happy with the look of all 3 together- once finished I'll do a group shot on my 'HH' dreadnoughts as well as my battle group of 14 dreadnoughts! 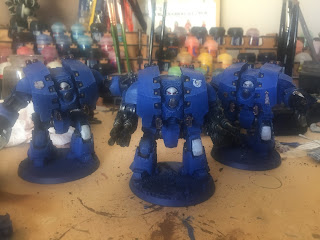 Thanks for looking!
Posted by Lord TITANium Halfpenny