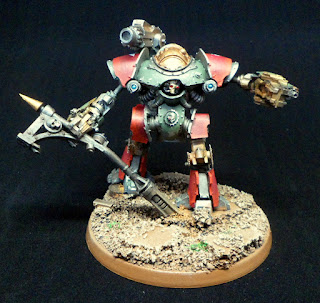 Hello Readers, thanks for dropping in again. Here is my latest addition to the Mechanicum force, another Castellax Battle-Automata, this one armed with the Marine killing Mauler Bolt Cannon (lke an AP3 Heavy Bolter) and Bolters in the fists, plus the fact that he is a 4W Monstrous Creature with Shock Chargers (S6 AP2 and Monstrous Creature - Smash at S10). 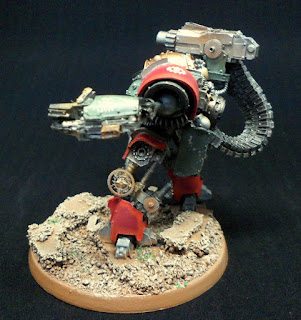 This was a part-painted purchase I made at cost price as the old owner wanted to move on to another army and have made the scheme more Ad Mech than the original green US Army style the previous owner had started, but I liked some of the green bits, so once again I chose to keep the torso and fists green. 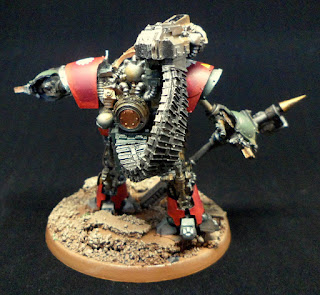 I painted the red plates, the details and lenses and weathered the metallics, weapons and did the bases to my usual standard. The paint job before was rather limited and no details but was fairly neat so I didn't need to strip and start again as such, so the undercarriage was pretty much done for me. 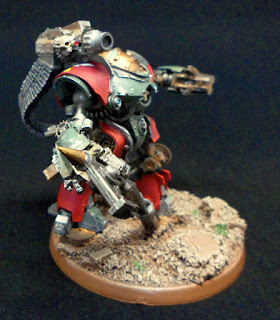 I used the Ad Mech transfers on these to tie all the Ad Mech, Skitarii and Mechanicum forces together, I have 5 Castellax, one more to finish and another Thanatar Siege Automaton. 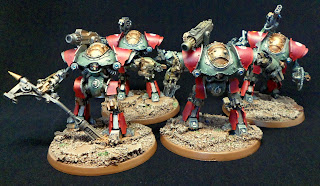 Here are the completed Castellax so far. Can't wait to use them soon. At the moment I've only used them as proxy Kastelan Robots in the Ad Mech force.

Thanks for reading. Some Genestealer Cult traitors are on the workbench, amongst other things...
Posted by Siph_Horridus