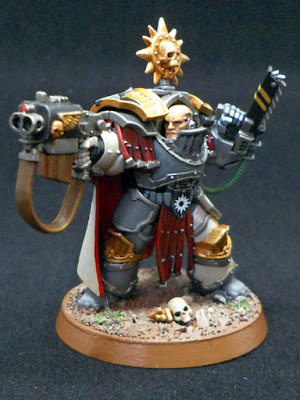 Hello fair Reader, continuing from my long ago post (January!... doh!) about using Betrayal at Calth miniatures in 40K, I eventually got around to getting the Captain off the To-Do pile and in the painting queue. I hope you like the results! 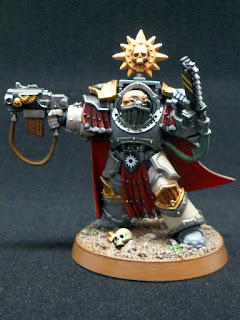 Lord Halfpenny suggested that the Captain Aethon in BaC could be used for a character found in Forgeworld's IA9 Badab War Pt1, Captain Mordaci Blaylock - ideal as he is armed with Storm Bolter and Chainfist called Foe Ripper.
I removed the Combi-Melta and added a modern '40k' era Storm Bolter and a Iron Halo and done. Captain Mordaci Blaylock - The BaC Captain is an ideal miniature for this Character of renown, has blinged up Termie Armour and a cloak, his special rules also make all Terminator Squads Scoring Units - in 7th we (WeeMen) interpret that as Obj Sec as everyone can score these days.  He has I5 and Captain Stats plus an Iron Halo making him not a bad addition to my Relictor force. 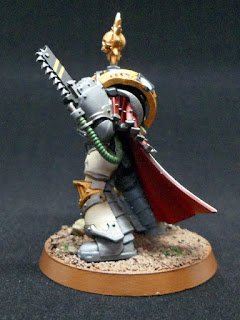 I kept the scheme a simple one, but as a nod to his original Novamarine heritage, I quartered the scheme with bone white and Relictor grey, instead of Nova Marine blue and white. In the fluff, he is the Captain of the Novamarines 1st Company and featured during the Badab War, saving the remnants of the Howling Griffons from extinction at the hand of the secessionist Executioners Chapter. 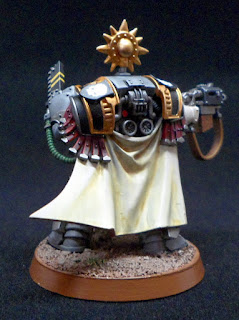 The cloak was done following most of my Relictor characters, kept plain on outside and red inside, the photo has washed out some of the shading, irl it looks a bit better. 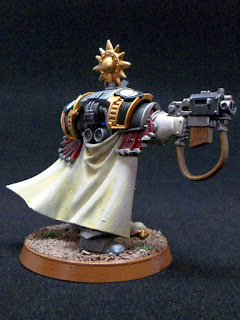 I also added the traditional Relictor black on the shoulder pads, amongst the bling gold and used two smaller skull transfers from the Imperial Knight transfer sheet, and the 'Halo' star pattern above the belt buckle as a further nod to his Novamarine heritage. 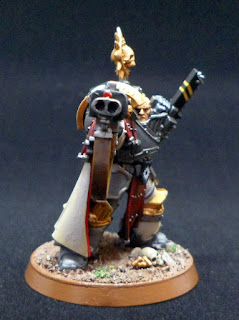 I thought it was about time I got some of the Betrayal at Calth box set completed, the birthday and Crimbo fairies may resupply with Burning at Prospero box set soon... the earlier Dreadtober Contemptor can be seen HERE.