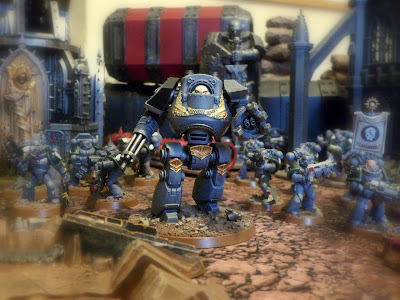 So I finished my pledged Dreadtober Contemptor Dreadnought on time and with a final flourish, Joe B at Broken Paintbrush suggested we took a Showcase photo. As I had already submitted a photo under bright light and a photo booth background, I thought I'd have some fun with my last submission. The photo above uses a simple soft focus around the Dreadnought to make sure it is him who is the centre of attention. 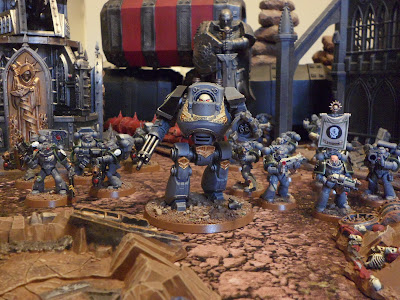 ### Relictors Dreadnought "Strength of Will" striding through the battlefield on Craxus III, a hive world in the outer rim of the Eye of Terror, a region of realspace the Relictors have been charged with defending from the forces of chaos, heretics, xenos and traitors... the Contemptor advances, punching a hole in the arch-enemy forces with well aimed bursts from his Assault Cannon and Storm Bolter Powerfist, alongside the Grav Cannon armed Devastators and Tactical Squad, all of them 4th Company. ###

Here is a similar shot, but without the blur, the Dreadnought can be somewhat lost in the battlefield, but pictured here is the Relictors advance alongside his Brothers in the 4th Company and who he will be fielded with on the future battlefields.

Hope you like. Thanks to all participants, Joe B and thank-you readers for dropping in on my humble part of the blogosphere. Here's to a successful Dreadtober 2017! Cheers, Siph.
Posted by Siph_Horridus