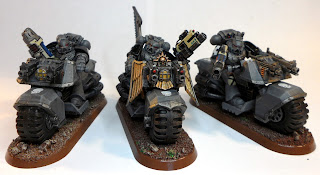 Welcome Readers, Thanks for dropping in.  Here is my latest addition to the Relictors Battle Company. Hot on the exhausts of the Melta Bike Squad, here is the re-appropriated Plasma Gunner from the original bike squad with his gun on his hip.

Along with the metal Plasma Gunner torso is another Plasma Gunner torso from the Dark Vengeance 40K set, slightly converted/re-posed to sit on a normal straight wheeled space marine bike. I had to cut at the wrist and a few adjustments to the waist to fit on a normal set of space marine biker legs. Also the Ravenwing icons from his back pack, Shoulder Pauldron and helmet were removed with a sharp knife and hobby file. 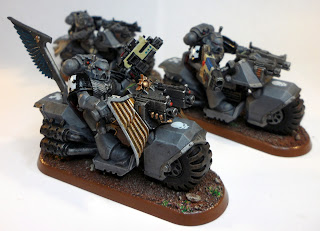 The Sergeant is another of the Dark Vengeance bikes, but with the bolt pistol replaced with a Combi-Plasma from Forge World. I am using the three fancy Dark Vengeance feathered fairing bikes as my Sergeants in two other squads yet to come, this matches the original Bike Squad Sergeant whose fairing was from the Space Marine Chaplain on a bike set. So this way, all my Sergeants have fancy gold fairings whilst the troops have basic looking bikes - functional. I had to remove the Ravenwing icons from the front wheel, Helmet, Shoulder Pauldron and Bolter casings too. 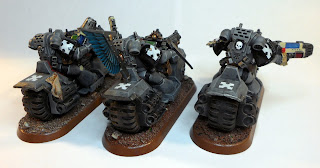 The rear totem feathers were simply painted Hawk Turquoise with Nuln Oil wash and a fine dry brush again with Hawk Turquoise to bring the edges back to a brighter colour. Notice, I always drill by exhausts as well as Bolter barrels for a touch of realism. 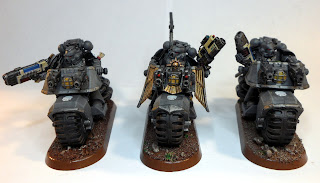 There you have them, another fine squad of Bikers for my Battle Company. Thanks for dropping by, hope you like. Cheers, Siph.
Posted by Siph_Horridus