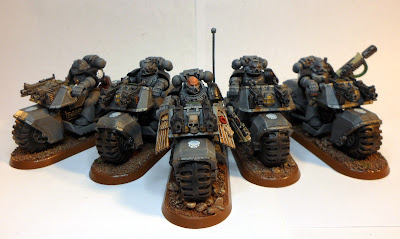 Hi Readers, thanks for dropping by. Today I would like to show you a little update from my original bike squad first posted HERE in 2012. I have considered their role on the battlefield and since I used the metal bikers torsos, I had one Meltagun and one Plasma Gun. I have now subbed out the plasma gun trooper and re-armed the Sergeant who used to have a Power Sword.

Now the squad have 2x Meltagun and a Combi-Melta, more specialised for the anti-tank role I see them having. I used the Meltagun from the Sternguard plastics and the combi-melta is from Forge World. The marine with the Meltagun on the hip is the original metal torso. 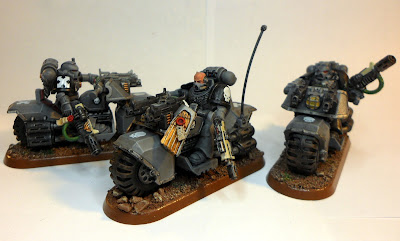 Finally a shot of all three special weapons, I may field just the three if the points are tight, but the normal pistol armed marines act as ablative wounds so will still see the table top. I have many more bike squads in the WIP stage for some of that Grav/Combi-Grav goodness.

Cheers for reading and visiting our humble corner of the blogosphere.
Posted by Siph_Horridus