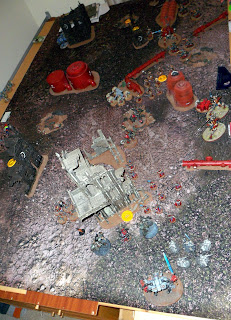 Welcome Readers, not a comprehensive Battle Report as we were having too much fun battling and taking a few pictures to record the narrative in detail, soz, but plenty of pictures were taken to share and a precis of happenings was remembranced... it was a Maelstrom of Battle with Tactical Objective cards and good use of the BlogWars Objective markers from Alex at From The Fang blog.

Draigo and the Knights of Titan plus some Imperium Assassin Operatives were dispatched to the Mechanicus World of Dach II to stop research into cybernetic AI deemed heretical by the Imperium. 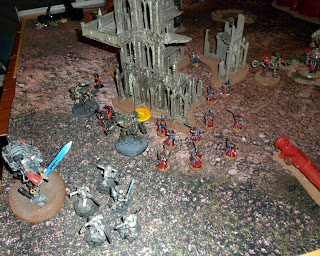 The Skitarii Ongar Dunecrawler started the hostilities as its defensive protocols were activated by the advancing Grey Knight Terminators, a shot of the Neutron Laser on target made easy work of the squad killing all but one Terminator. The Dreadknight shunted into the back lines of the Mechanicus and targetted the Datasmith of two Kastellan robots. 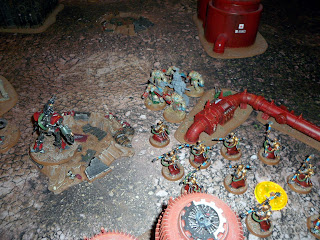 A second squad of Grey Knight Terminators and Librarian Gate of Infinity phased right into the path of two Kastellan Robots and Fulgrite Techno Priests. Fresh from its first turn sucess the Dunecrawler targetted the second squad, and combined with the firepower of a squad of Torsion Cannon wielding Kataphron Breachers tore the squad asunder. 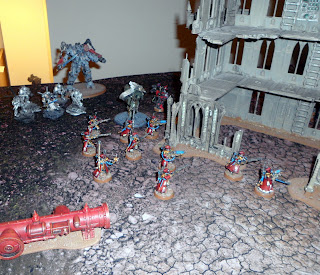 The Skitarii Rangers were caught in a crossfire of Eversor Assassin, Dreadknight and a squad of Grey Knights wiping them out, but not until the Rangers had taken down the Eversor! with a lot of help from two Sydonian Dragoons. The Skitarii Ruststalkers got the measure of a Callidus Assassin using their Transonic Blades and Chordclaw, then over a few rounds of combat took out the Culexus too. 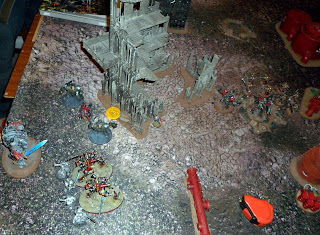 The Grey Knights and Dreadknight continued to cause concern in the back corner. 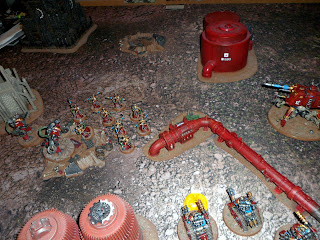 The centre was dominated by the Dunecrawler, Breachers and the shooty Kastellan robots. 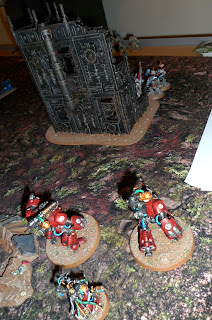 On the right flank the fist Kastellans faced up to Draigo and his squad of Paladins who had failed to cast Gate of Infinity to get into the action elsewhere. The Force activated bolt and Psycannon rounds made short work of the robots. However this opened them up to return fire from Torsion Cannons and the Dunecrawler - torsion cannons being outstanding and taking a few Paladins out. The Vindicare Assassin finally found his mark taking out the Dunecrawler in response for targetting Draigo. 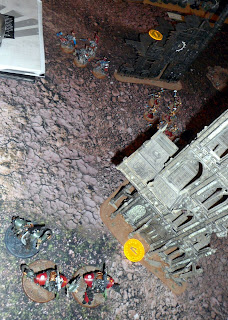 Draigo Gate of Infinity shunted to the opposite flank to claim an objective and easily cut down the remaining Ruststalkers and resisted the firepower of three Kastellans. 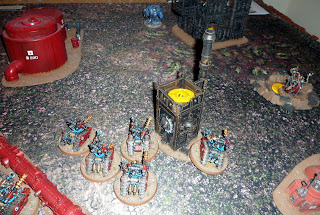 In turn five, the massed firepower of Torsion Cannons ripped apart the venerable Dreadnought who had not done much, failing to hit with his twin linked Lascannon and taking a hull point off the Dunecrawler but failed to snipe the Tech Priest Dominus.

Final result 11 vs 3 VPs to the Mechanicus Force, research to the Cybernetic AI will continue - at least until Draigo orders Exterminatus from orbit!
Posted by Siph_Horridus