Yet again the Lord Halfpenny Ultramarines were pitched against the Siph Relictors to try and claim a relic of untold power from the battlefield (the Cypher model on the Temple of Skulls below).  The two opposing forces set up Hammer and Anvil and the warlord traits were rolled, Tigurius for the UM's with Storm of Fire and Captain Blaylock caused Fear (fat lot of good with ATSKNF)... 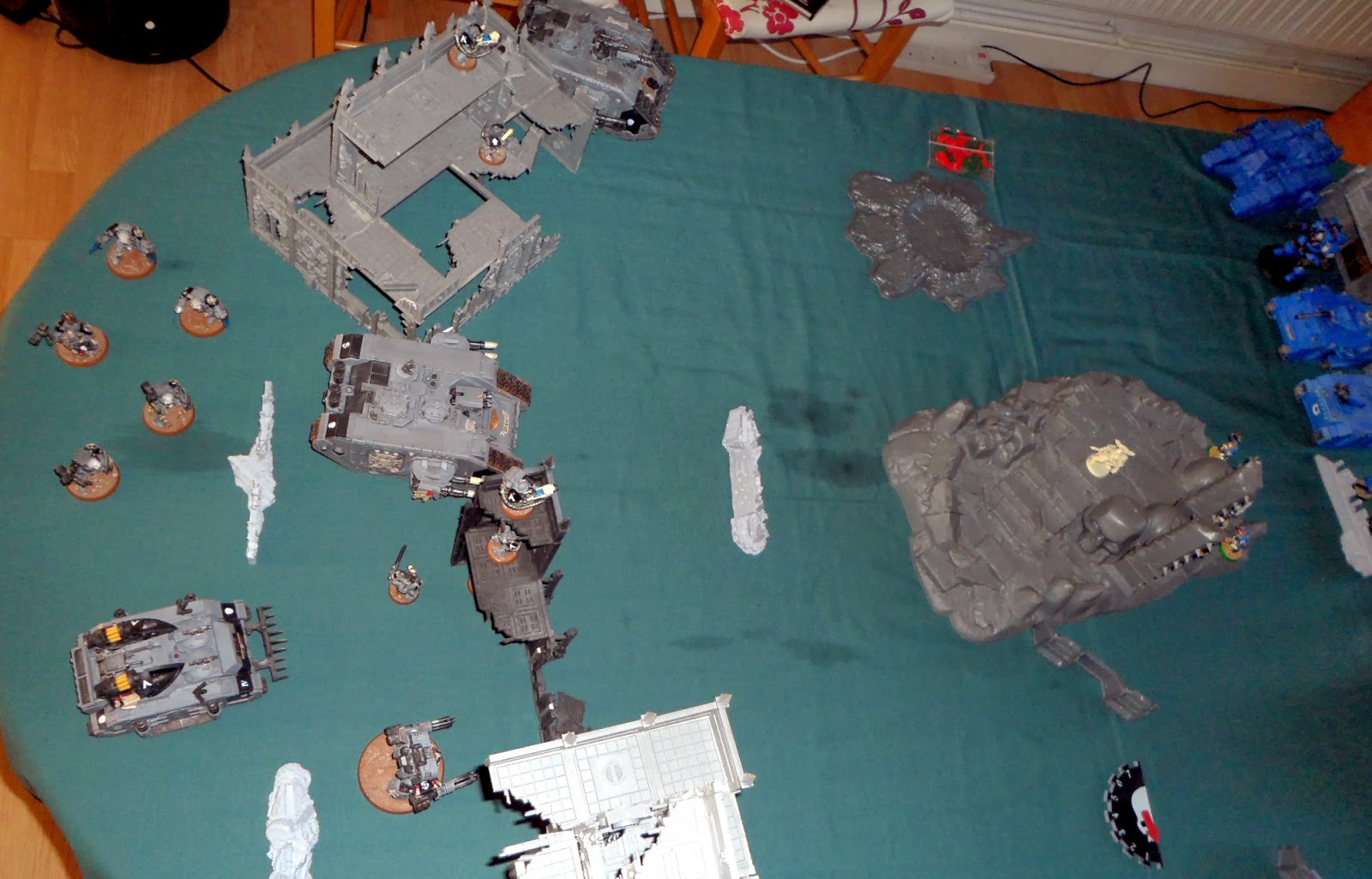 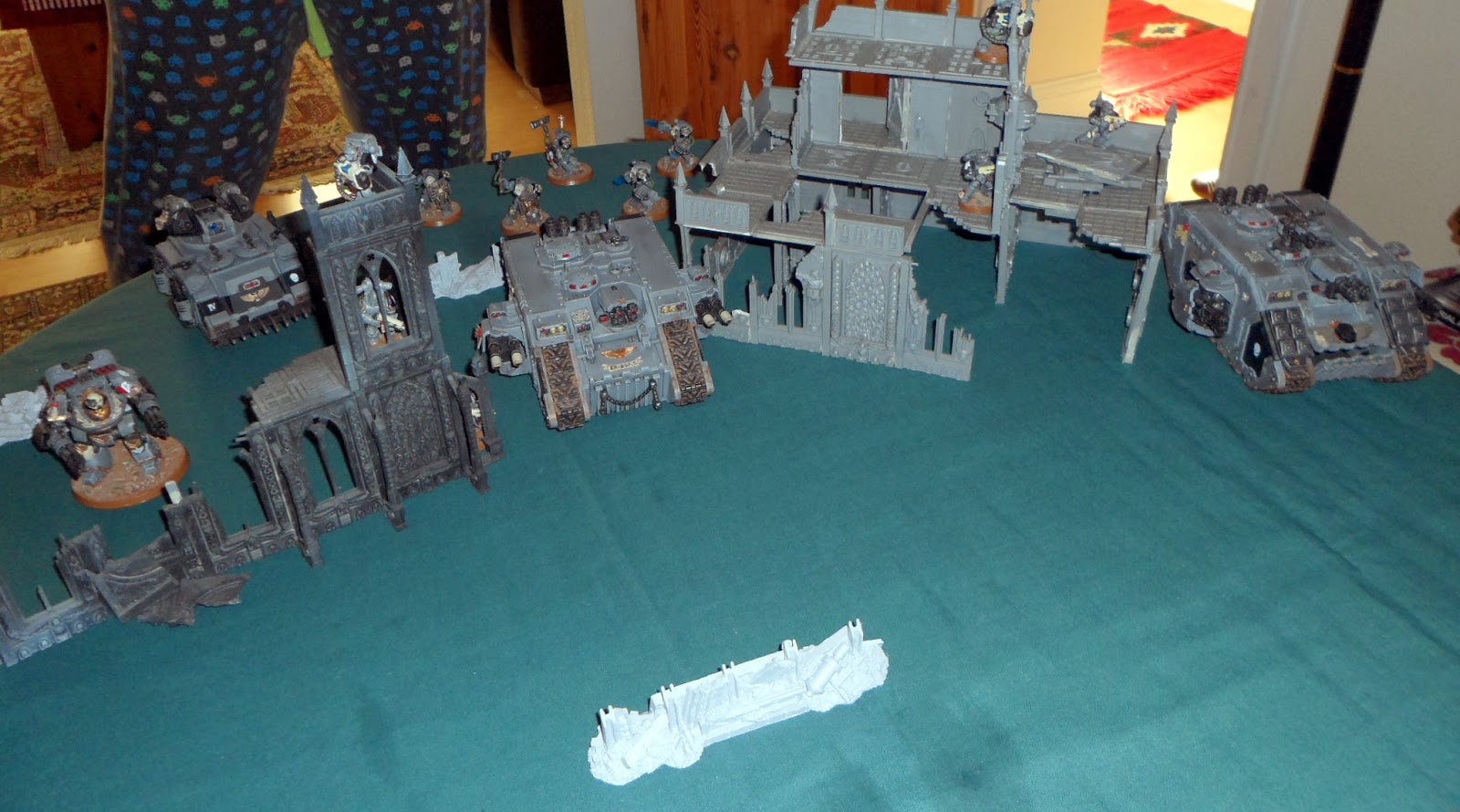 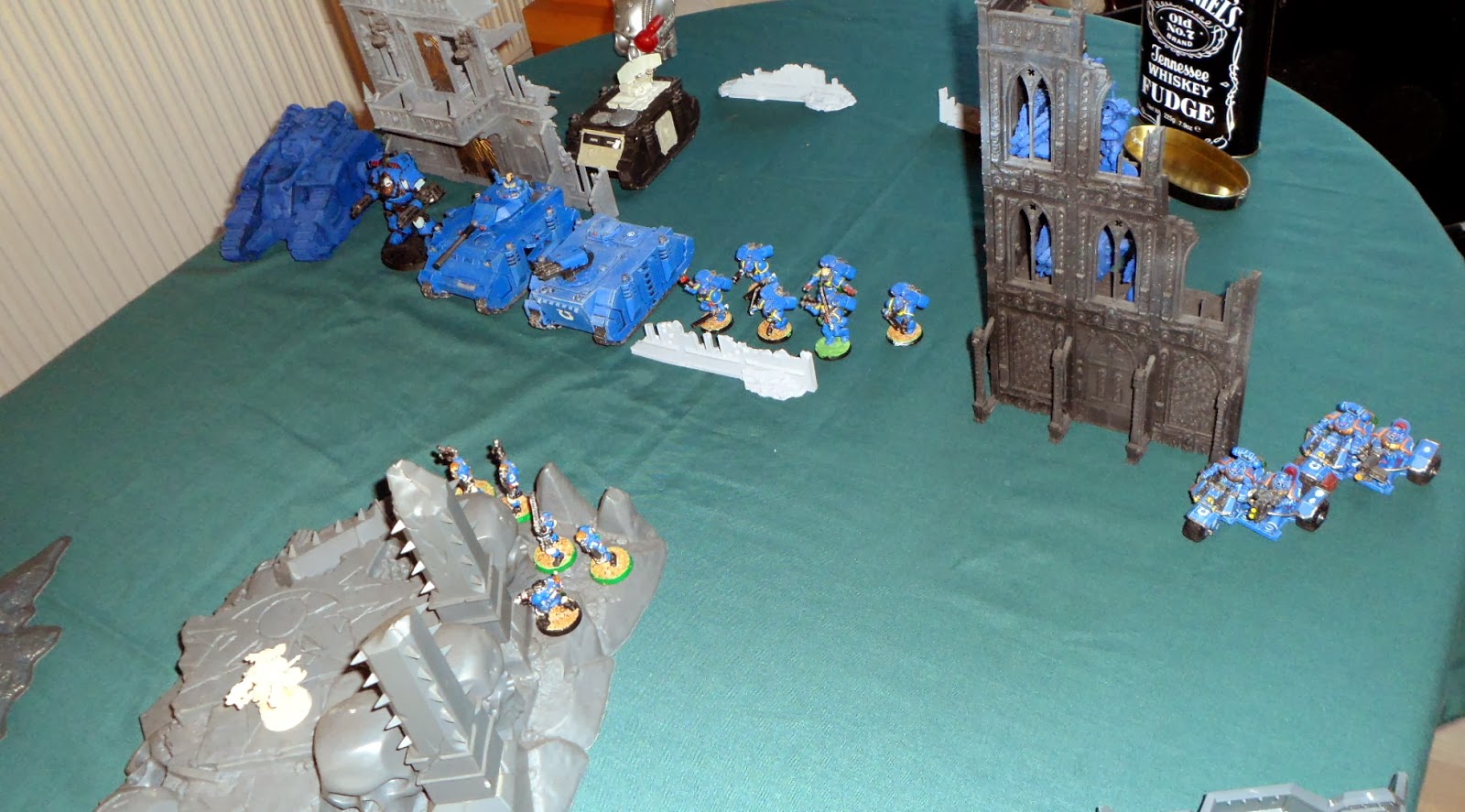 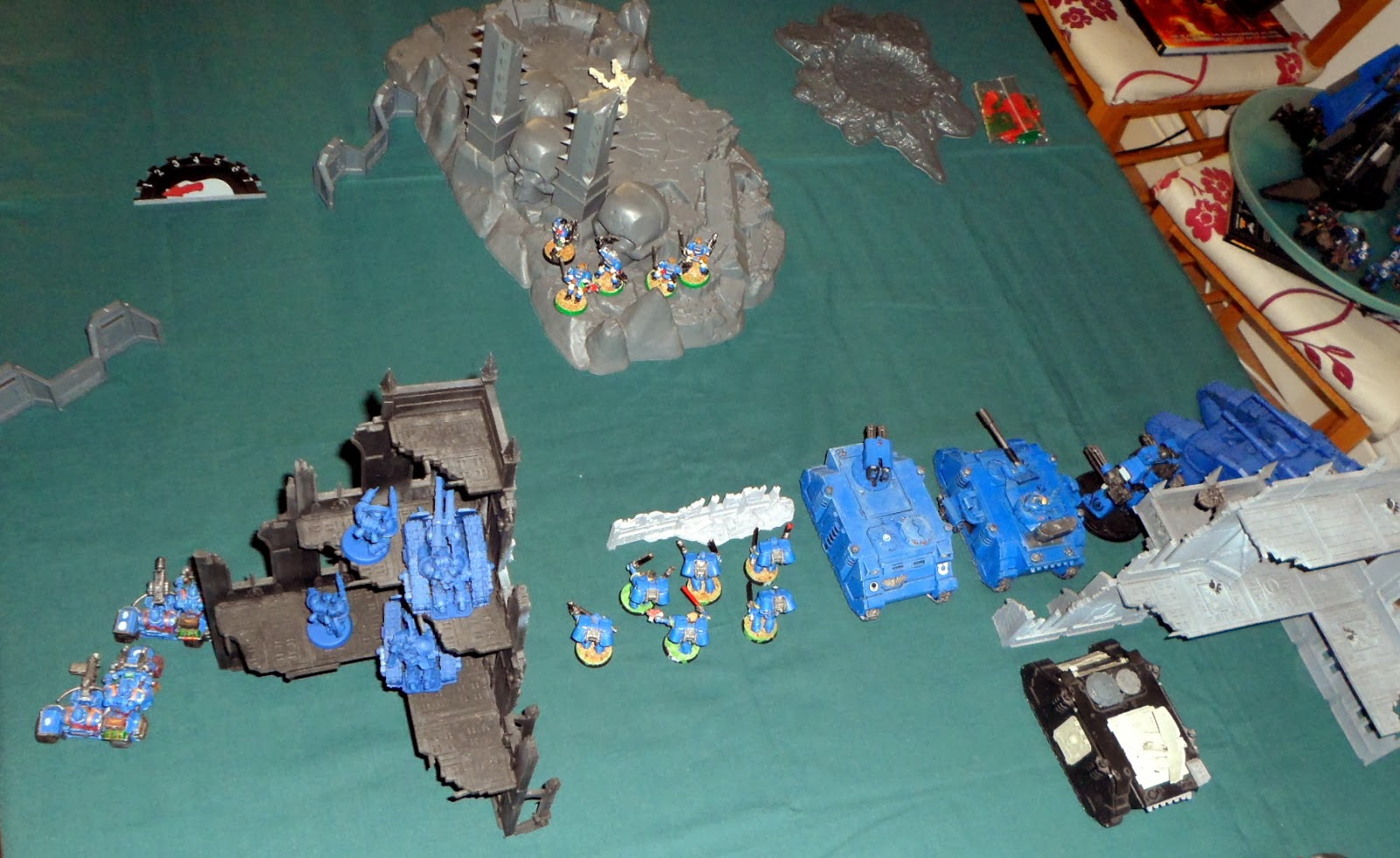 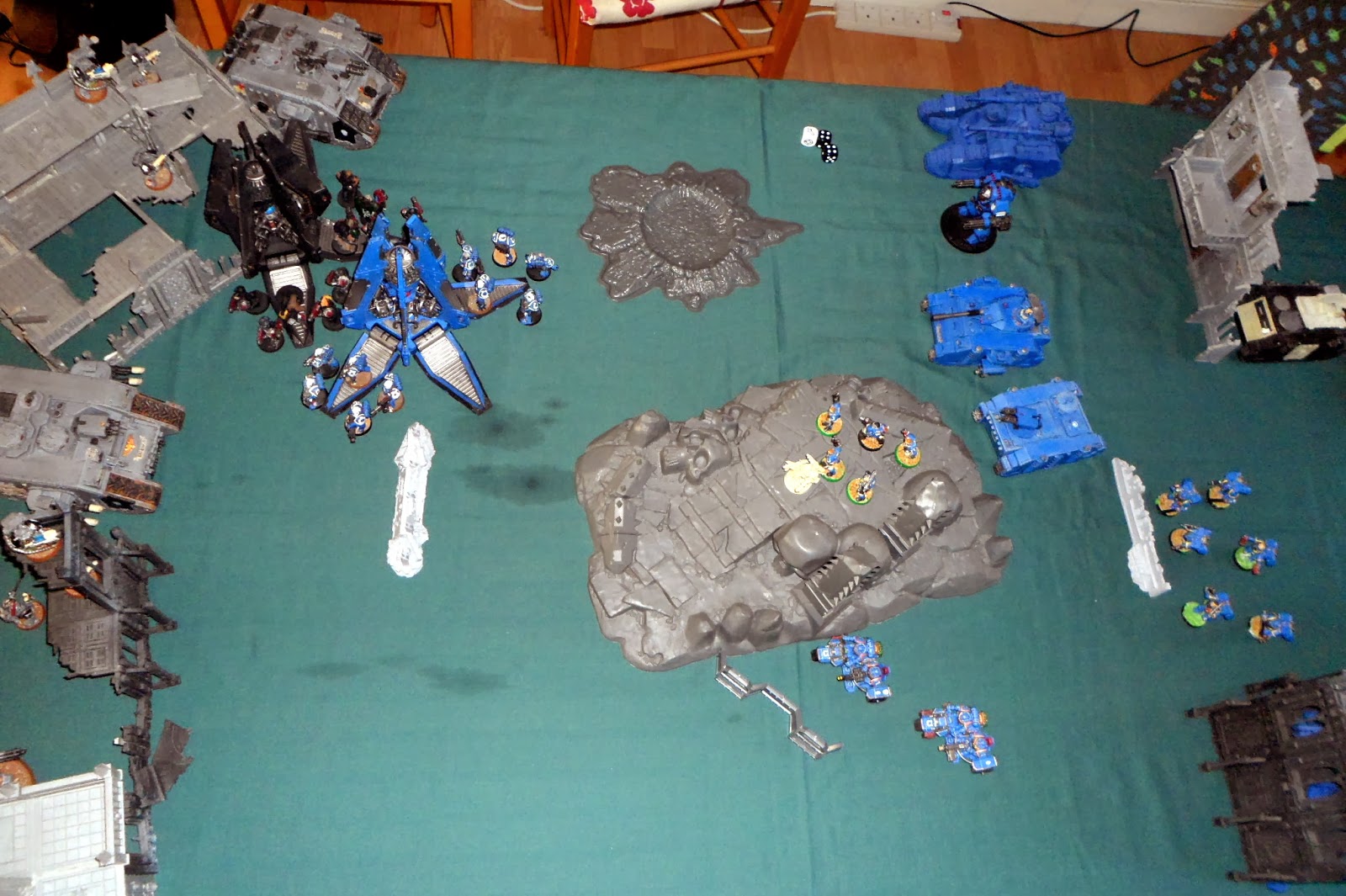 UM Turn 1 - Drop Pod Assault meant 20 Sternguard dropped into the Relictor lines, 20 Grav Gun shots where ineffective against the Landraiders, stripping a single Hull Point from the Redeemer. Sicaran, Dakka Pred and Mortis Contemptor moved forward, Scouts infiltrated and ran to the Relic Objective in the centre of the battlefield. 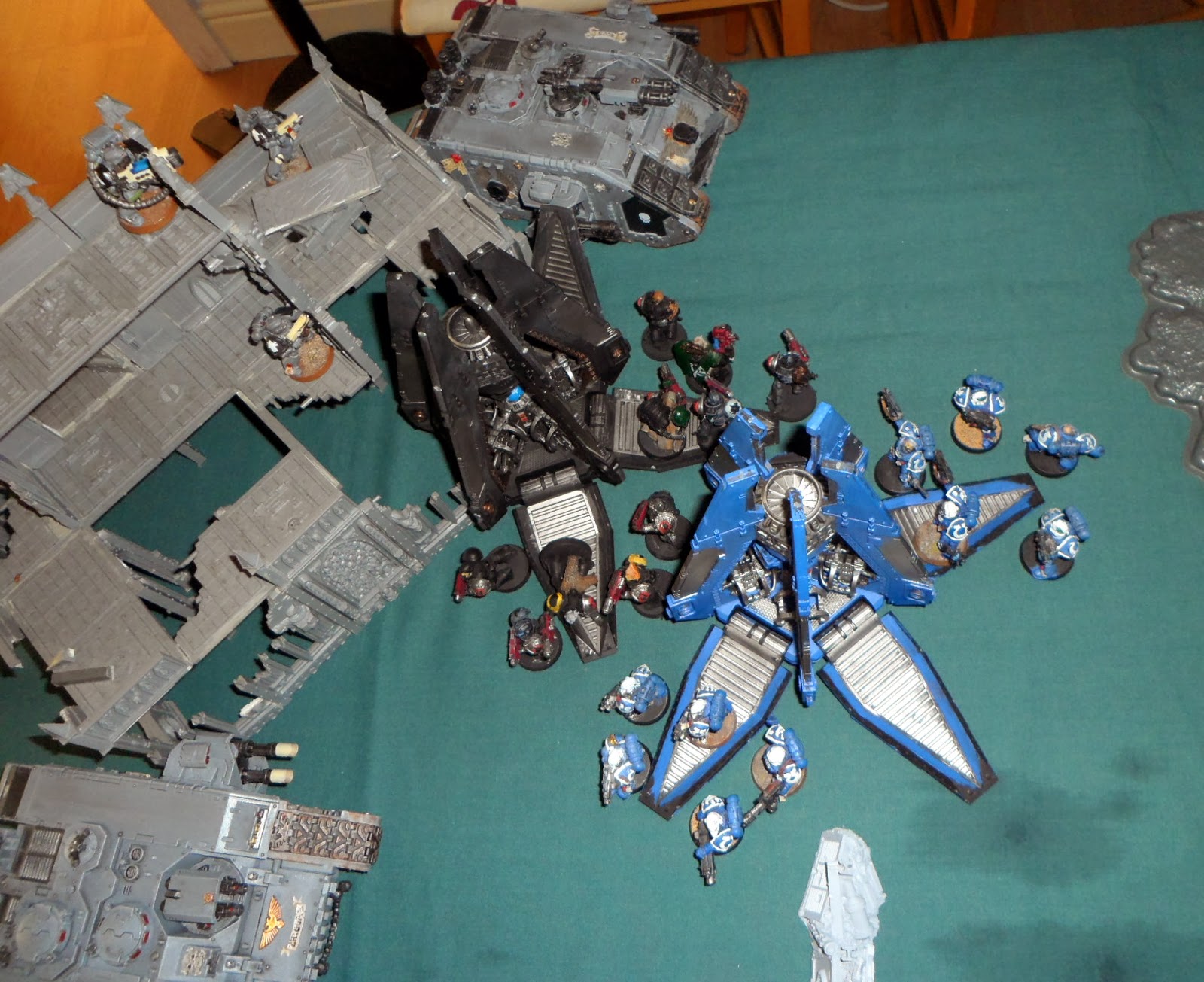 Here the Sternguard pour fire into the Relictor Tac Squads killing 2 marines with Vengeance Rounds and Grav glancing the Landraider. The Hellfire rounds of the Sternguard kill 3 Terminators, two with Storm Shields of Captain Blaylocks Sqd. 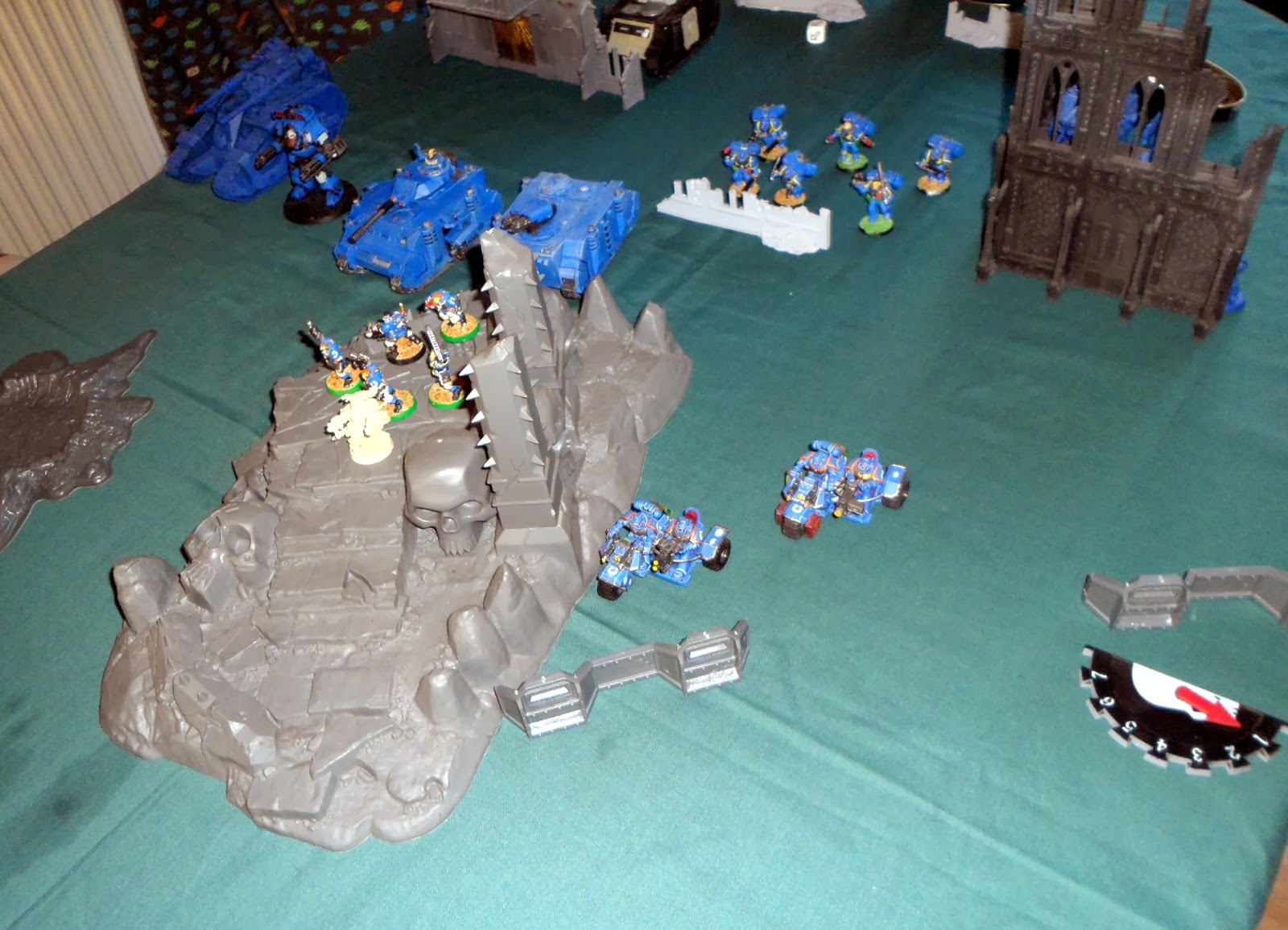 The two Attack Bikes zoom forward down the left flank and Rapiers take up positions in the ruins. 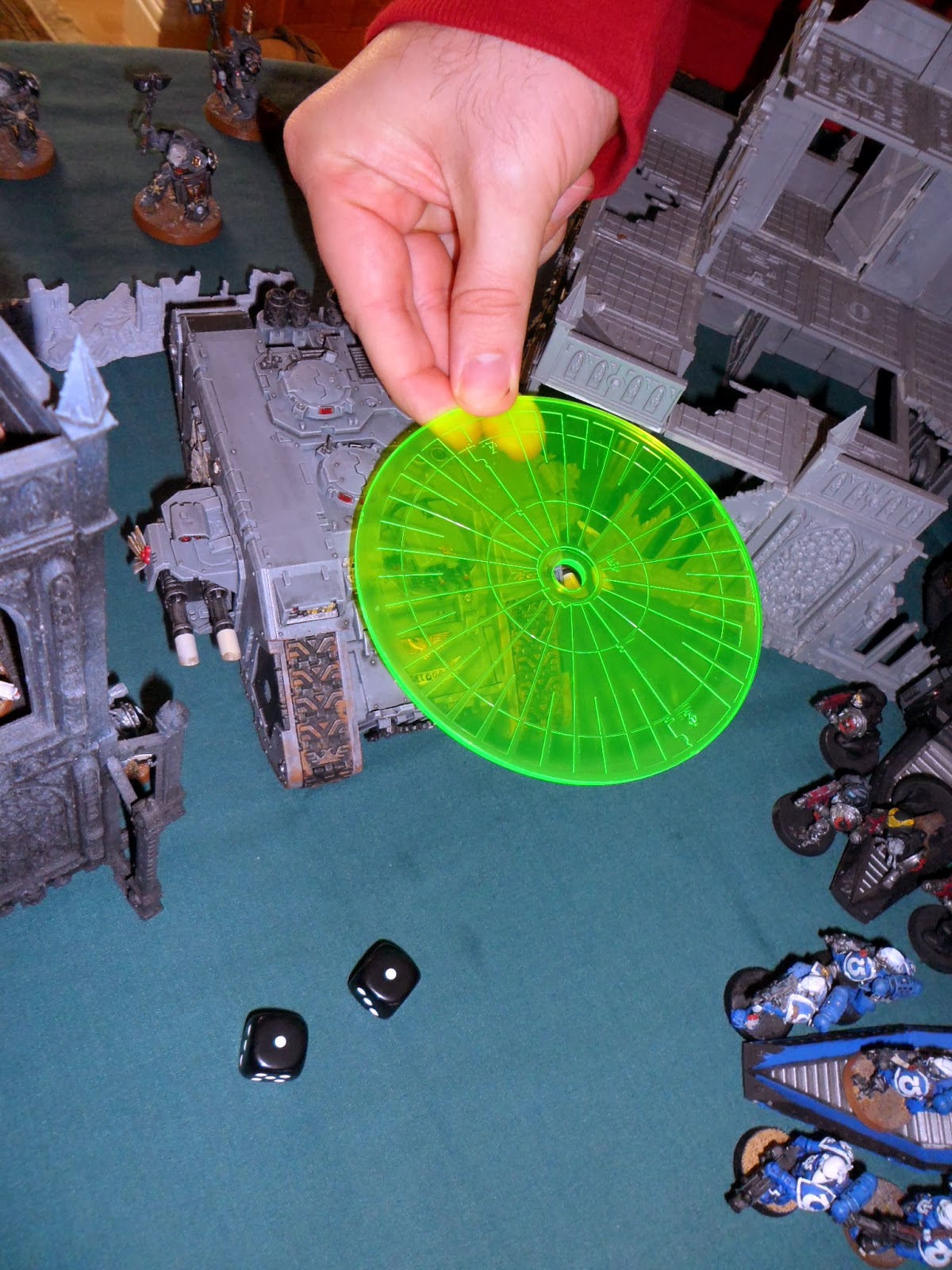 The Damocles Rhino uses its Comms Link to call down a Turn 1 Orbi Bombardment onto the Godhammer, but even with Ordnance double roll fails to penetrate the thick hull! Much to the relief of the Relictors. 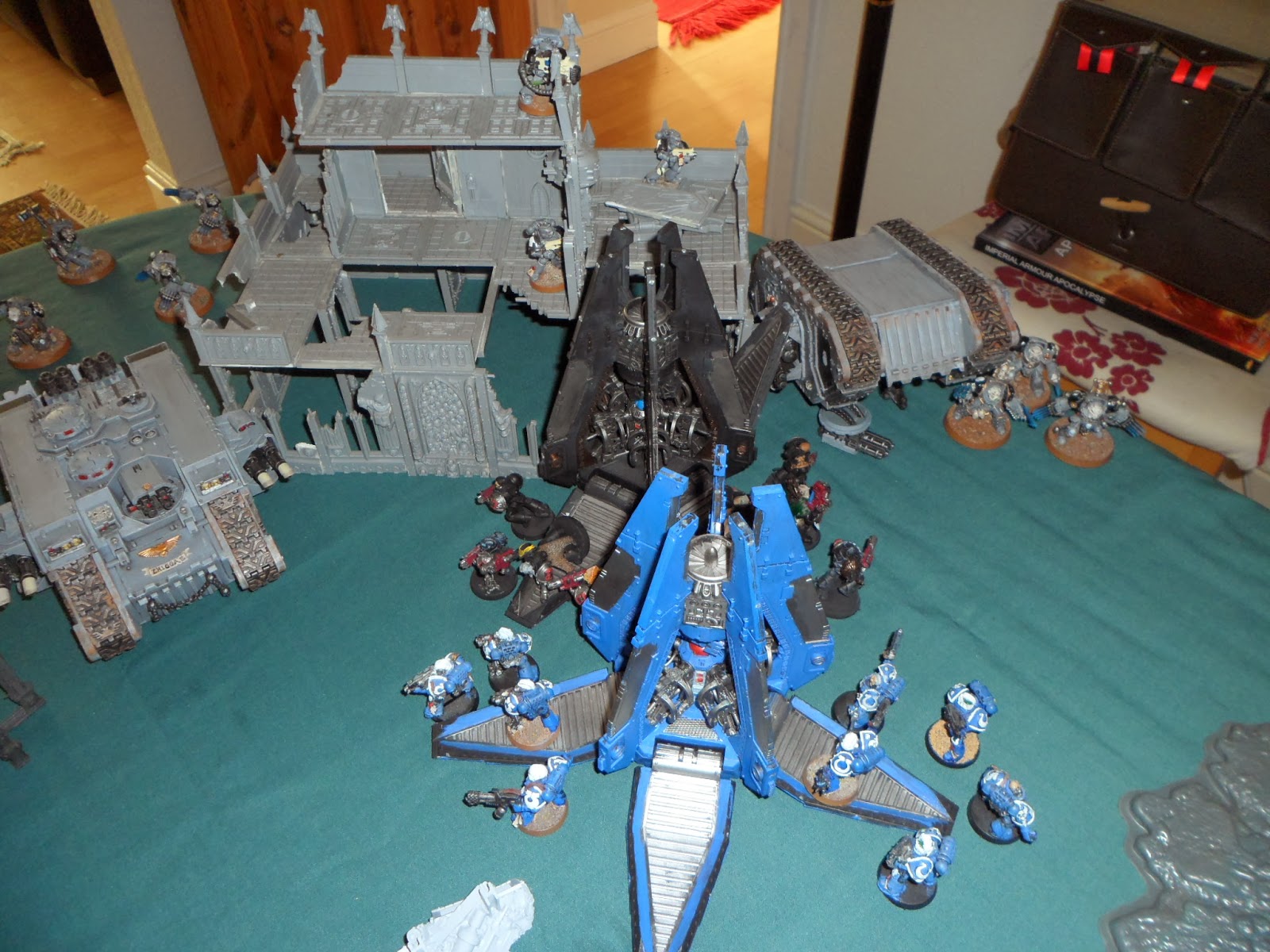 But the Sicaran opens fire with its rending Accelerator Autocannons ripping the Redeemer apart, stripping its hull points and penetrating, wrecking the Landraider and Assault Terminator transport! The Sicaran is to be feared! 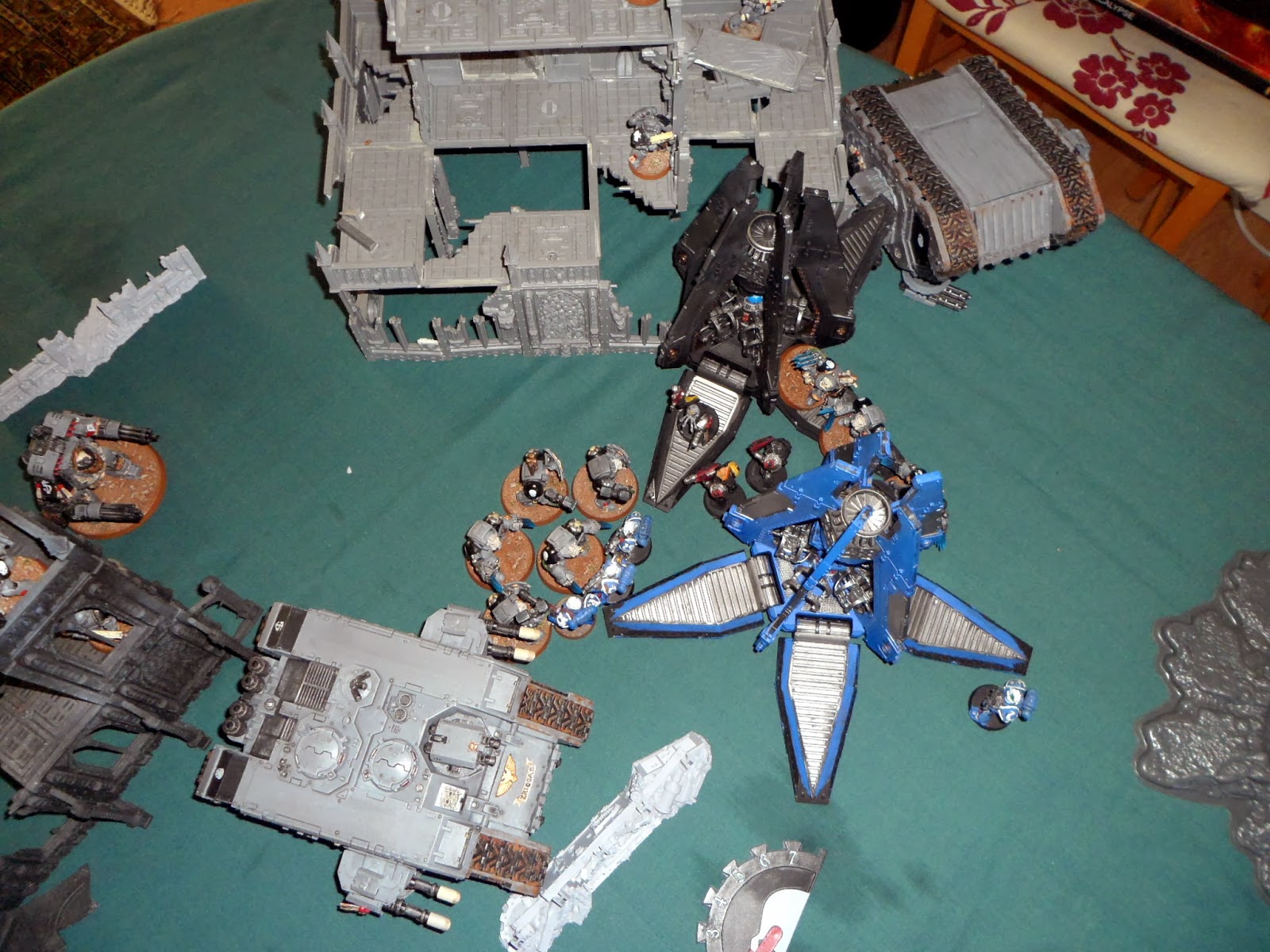 Relictor Turn 1 - The Relic Whirlwind Scorpius open fired on the Scouts claiming the Relic in the centre and wiped them out with D3+1 Blasts! The Mortis Contemptor open fired on a combat sqd of Sternguard only killing two, a Plasma Cannon wielding Tac Sqd did better, opening fire on a Sternguard Combat Squad killing 4, leaving a lone marine. The other Plasma Cannon missed. The Godhammer fired his TL Lascannons at the AV13 Sicaran but failed to even glance. The Deathstorm Drop Pod scatters but still fires and hits 5 UM units in a rain of Whirlwind fire but poor rolling see's only the Assault Marines losing 3 marines. The Assault Termies charged the Sternguard, wiping out one Combat Squad but opening up the Captain to return fire next turn. 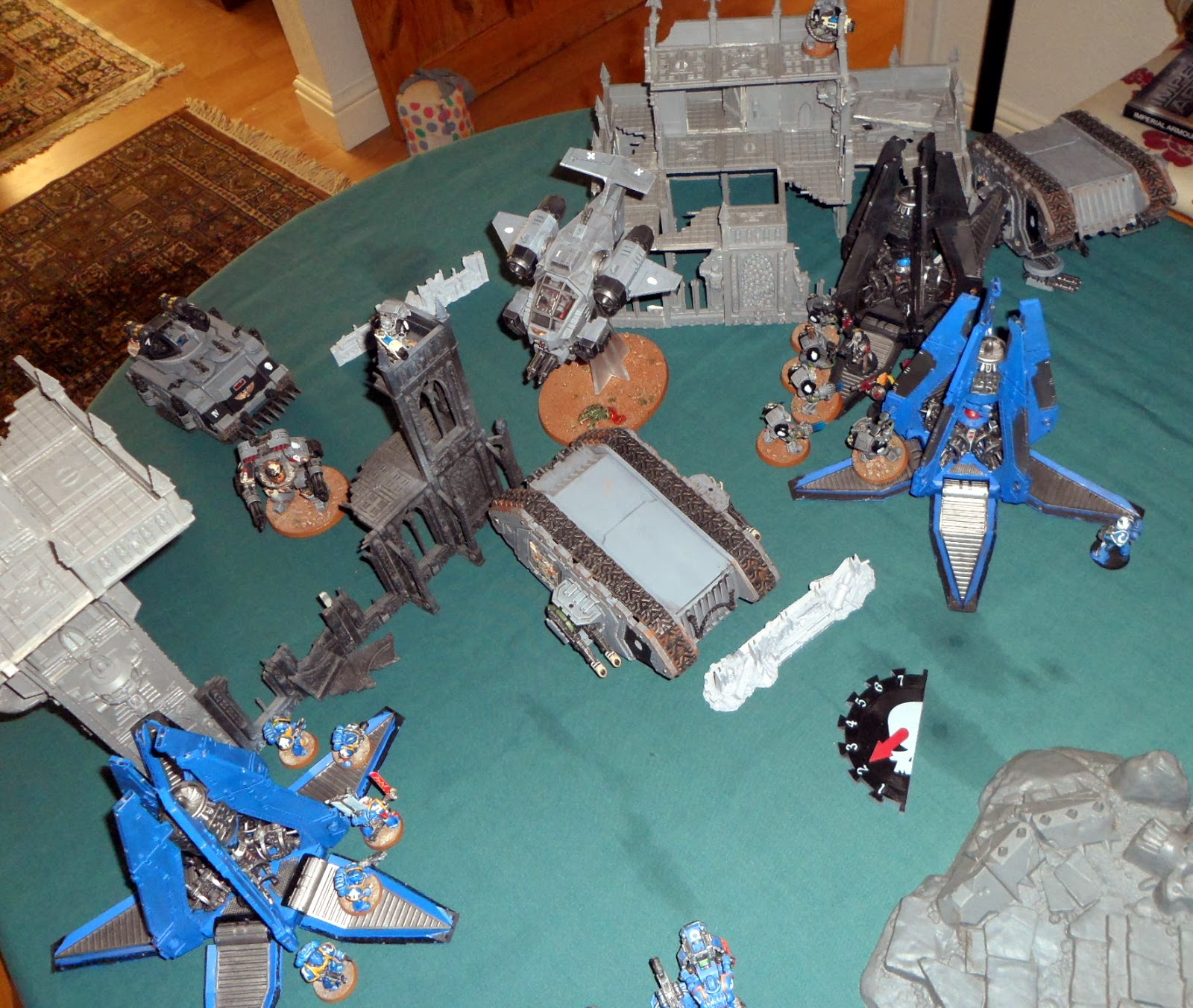 UM Turn 2 - (ignore the StormTalon - I took the photo at the start of the Relictor turn) The Drop Pod UMs strike again, Meltagun and Attack bike MM kills the Godhammer, the Sicaran and Mortis Contemptor both open up on Captain Blaylock and bodyguard killing the Warlord and Termies under sheer weight of fire - 22 high strength shots! The Laser Rapiers tear through the Whirlwind Drop Pod. In assault, a Sternguard Combat sqd is defeated by the other Terminators. Unengaged Sternguard and Drop Pods kill two more Tac Marines reducing them to a single Plasma Cannon on the black ruins, 4 marines incl Plasma Cannon on grey ruins. UM now 7 VPs - gaining Godhammer, Termies, Warlord and Slay Warlord and Whirlwind Drop Pod. Relictors on 3VPs gaining Sternguard Combat Squad. 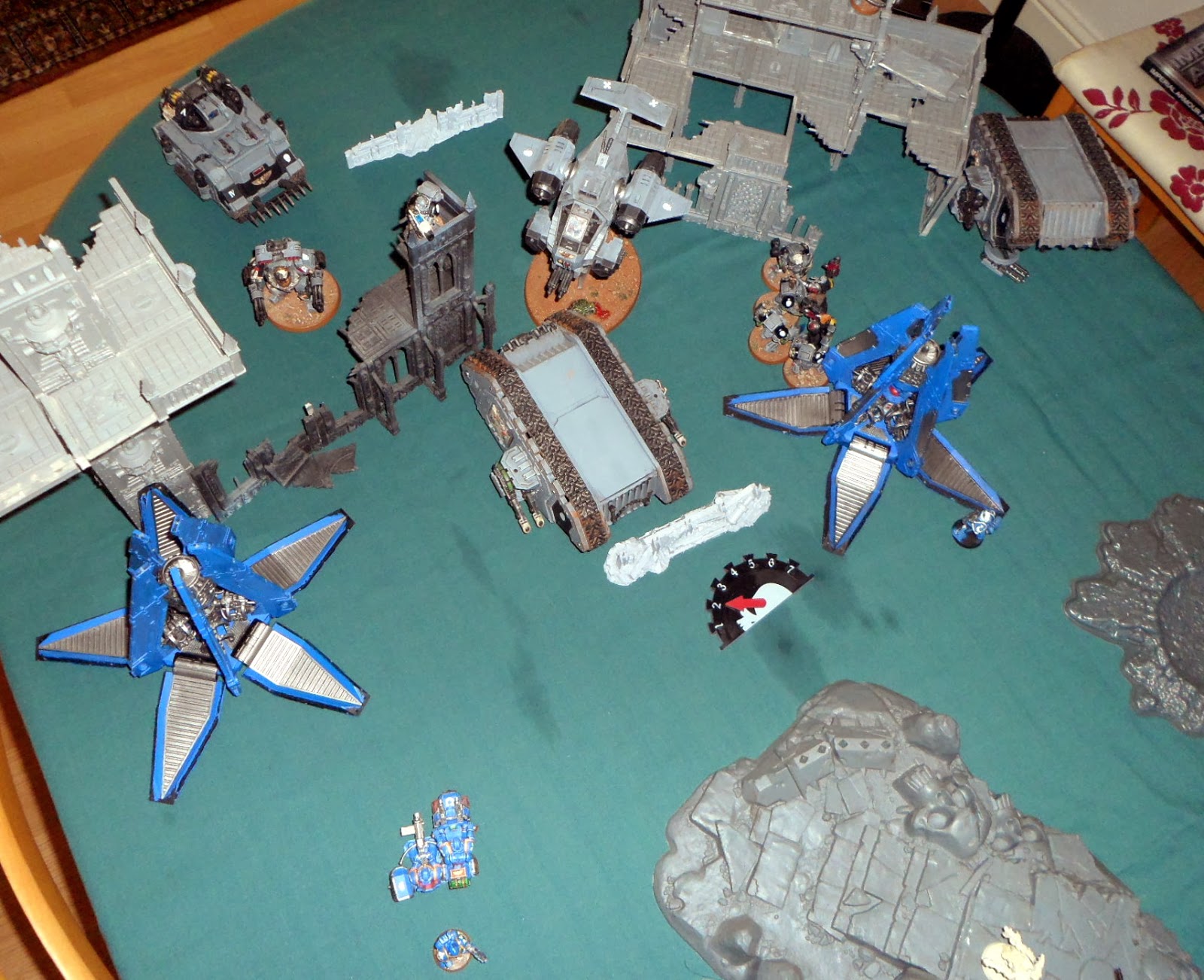 Relictor Turn 2 - The Relictor Army was looking in tatters losing its Captain, half the Termies and both Landraiders however, the Termies left still melee with the Sternguard but in a disorganised charge destroyed a Drop Pod with a Thunder Hammer, StormTalon arived, strafing the Attack Bikes, killing the MM Attack bike. The Mortis Contemptor killed 3 of the Tac Marines from the latest Drop Pod, including the Meltagun removing that threat and made the other two flee. The Scorpius fired on the Razorback but scattered onto the Predator only stripping 1 hull point. Both Plasma Cannons concentrated on the Razorback containing the remaining scoring troops and Tigurius stripping 2 hull points. Relictors now on 4VPs with the Drop Pod being destroyed. UMs remain on 7VPs. 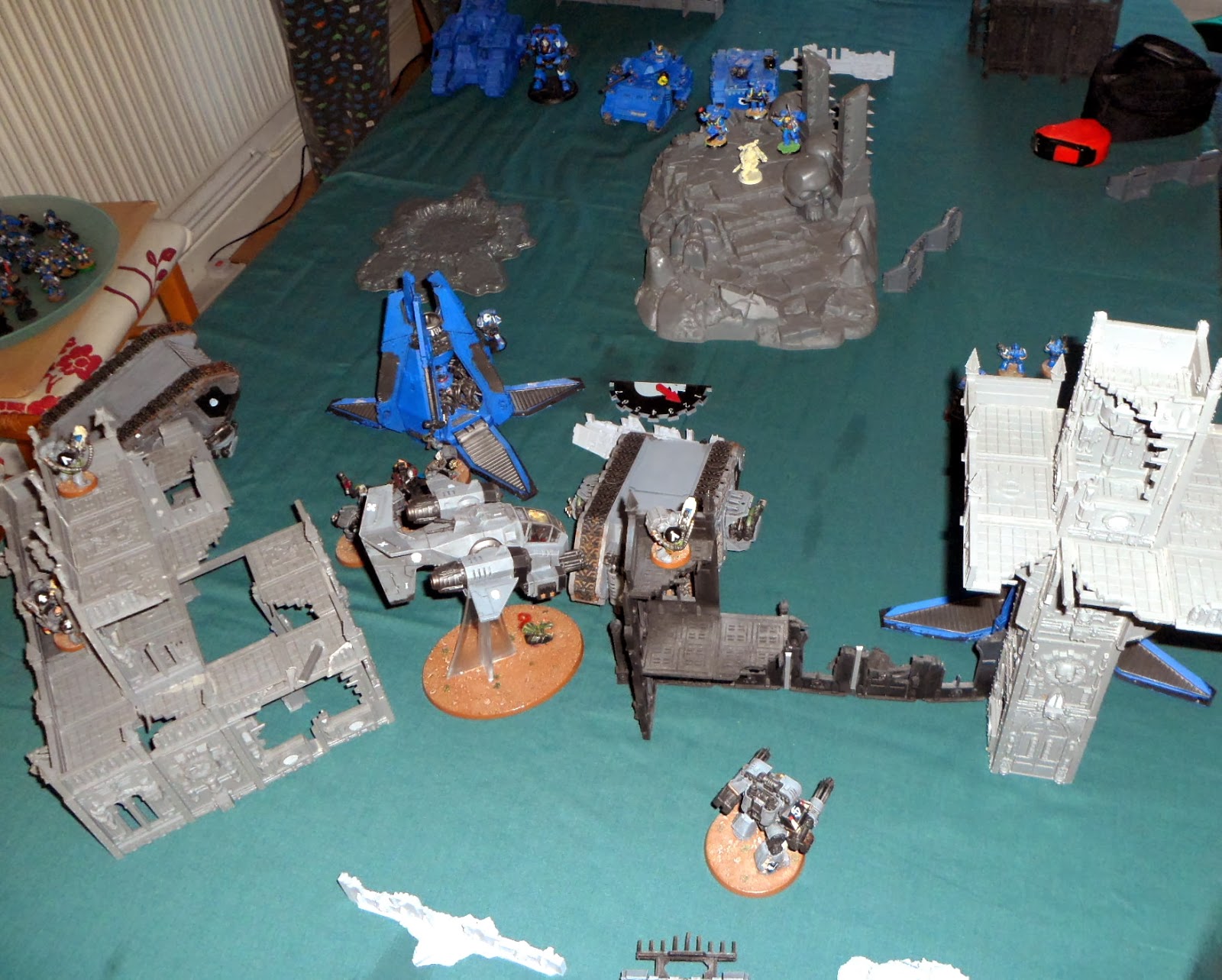 UM Turn 3 - The HB Attack Bike opened up on the remaining Tac Marine with the Plasma Cannon killing him and wiping out the sqd, but the remaining unengaged single Sternguard open fired on the other Plasma Cannon Tac Marine with Vengeance Rounds killing himself when his weapon overheated! The Drop Pod Stormbolter also open fired on the Plasma Cannon Tac Marine hitting him twice but his armour saved him. The other Drop Pod and Predator snap shot at the StormTalon missing. The remaining 3 Assault Marines charged the Termies locked in combat with the Sternguard, killing one Termie but the Terminators fought back killing the Sternguard Sqd and 2 Assault Marines leaving one. UMs now on 8VPs with the Tac Sqd, Relictors now on 6VPs with the misfired Sternguard and the close combat Sternguard. 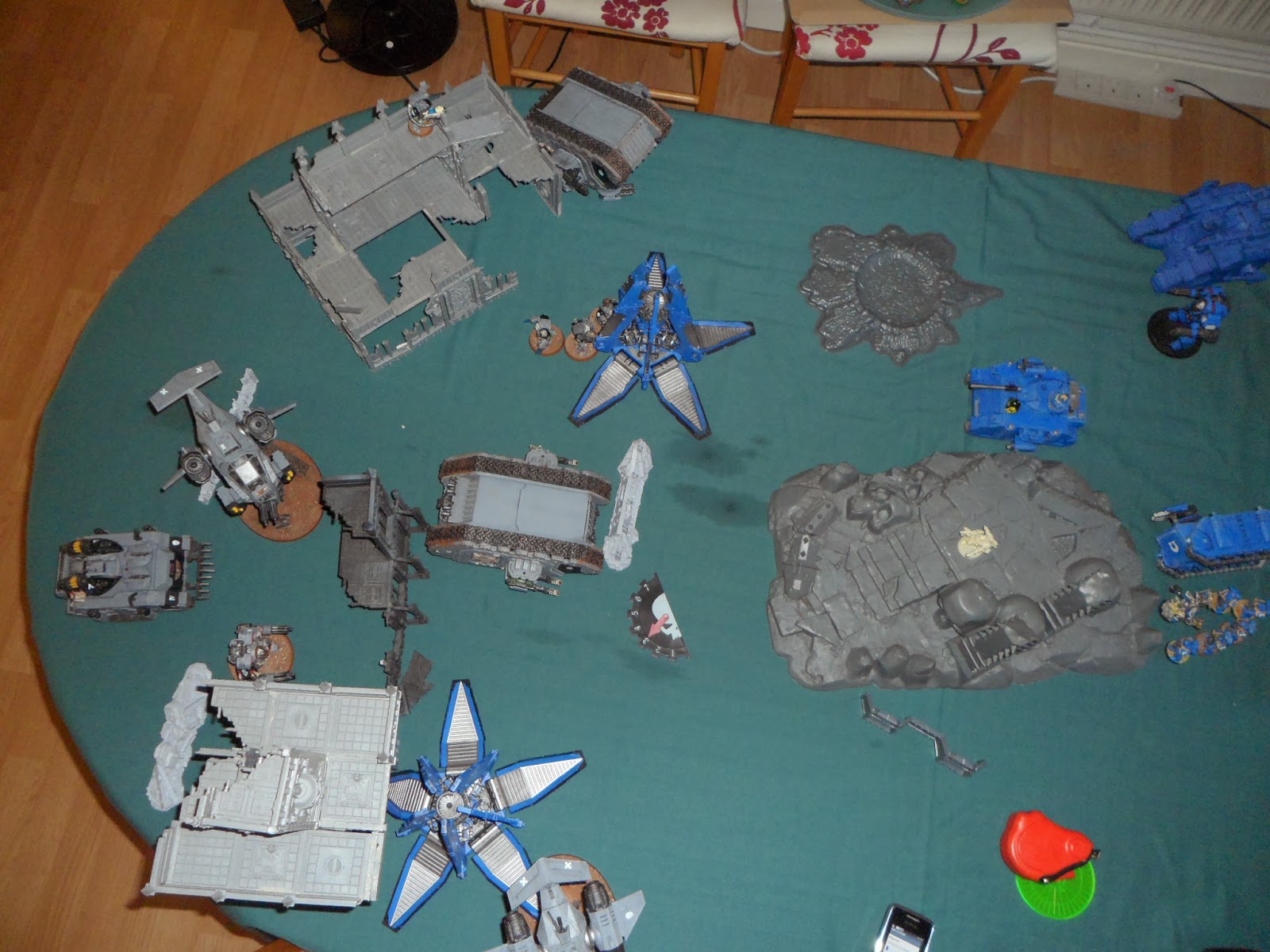 Relictor Turn 3 - Plasma Cannon opens fire on the rear armour of the Razorback again, but bounces off.  The 2nd StormTalon arrives from reserve and strafed the remaining Attack Bike killing it. The Mortis Contemptor spies the 2 remaining Tac Marines making a run for the relic in the centre and cut them down with its Kheres Assault Cannons! The Scorpius Whirlwind destroyed the Razorback holding Tigurius and the 5x man Tac Sqd in the centre. In assault, the Thunderhammer Termies wipe out the Assault Marines. 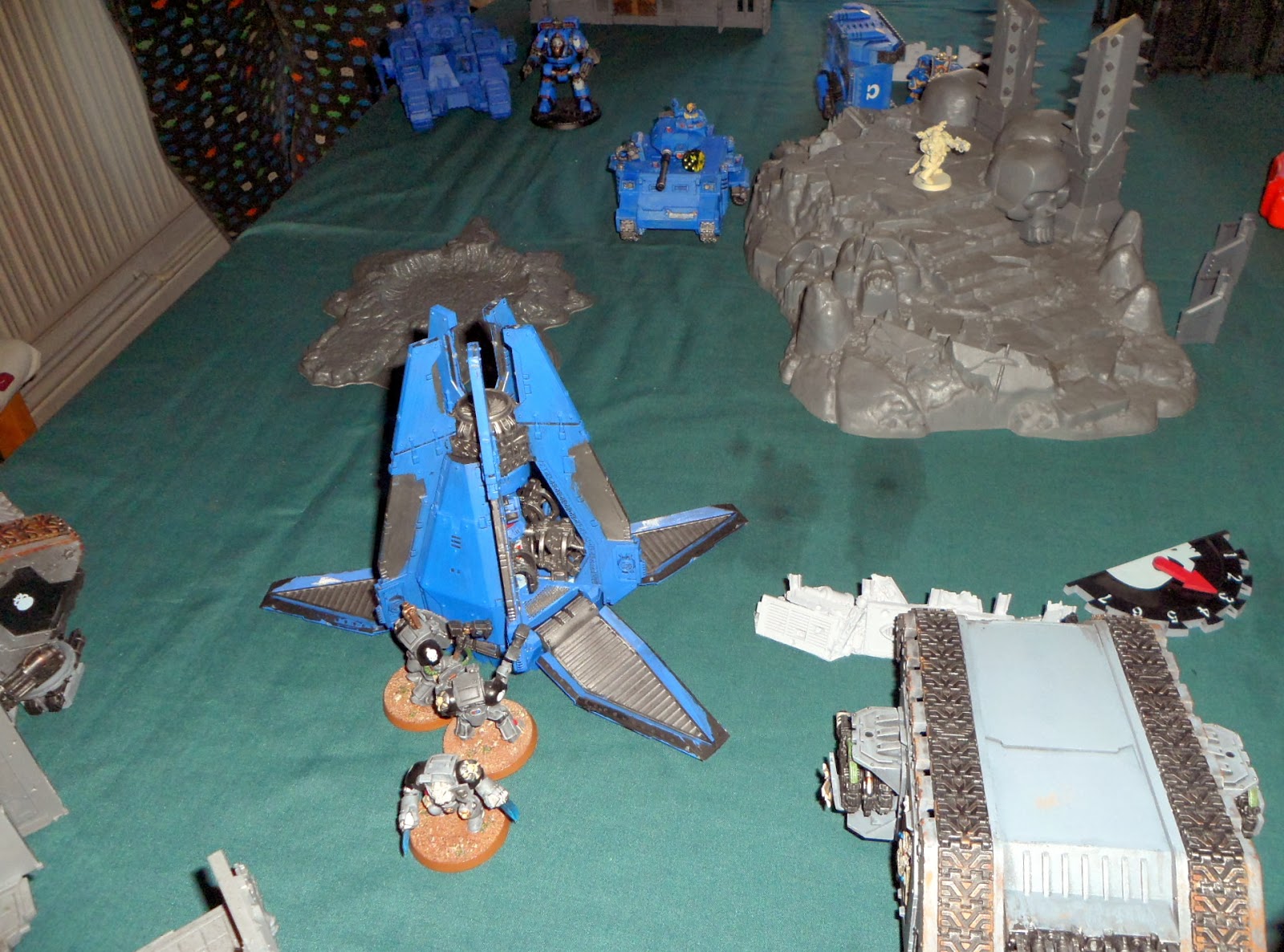 The Relictor Termies hunker down behind the Drop Pod after dispatching the final Assault Marine, sheltering from the combined fire of the Sicaran, Mortis Contemptor and Dakka Pred. Who said war has to be glorious! UMs 8VPs, Relictors now ahead on 10VPs with the Razorback, Assault Marines, Attack bike and Tac Combat Squad. 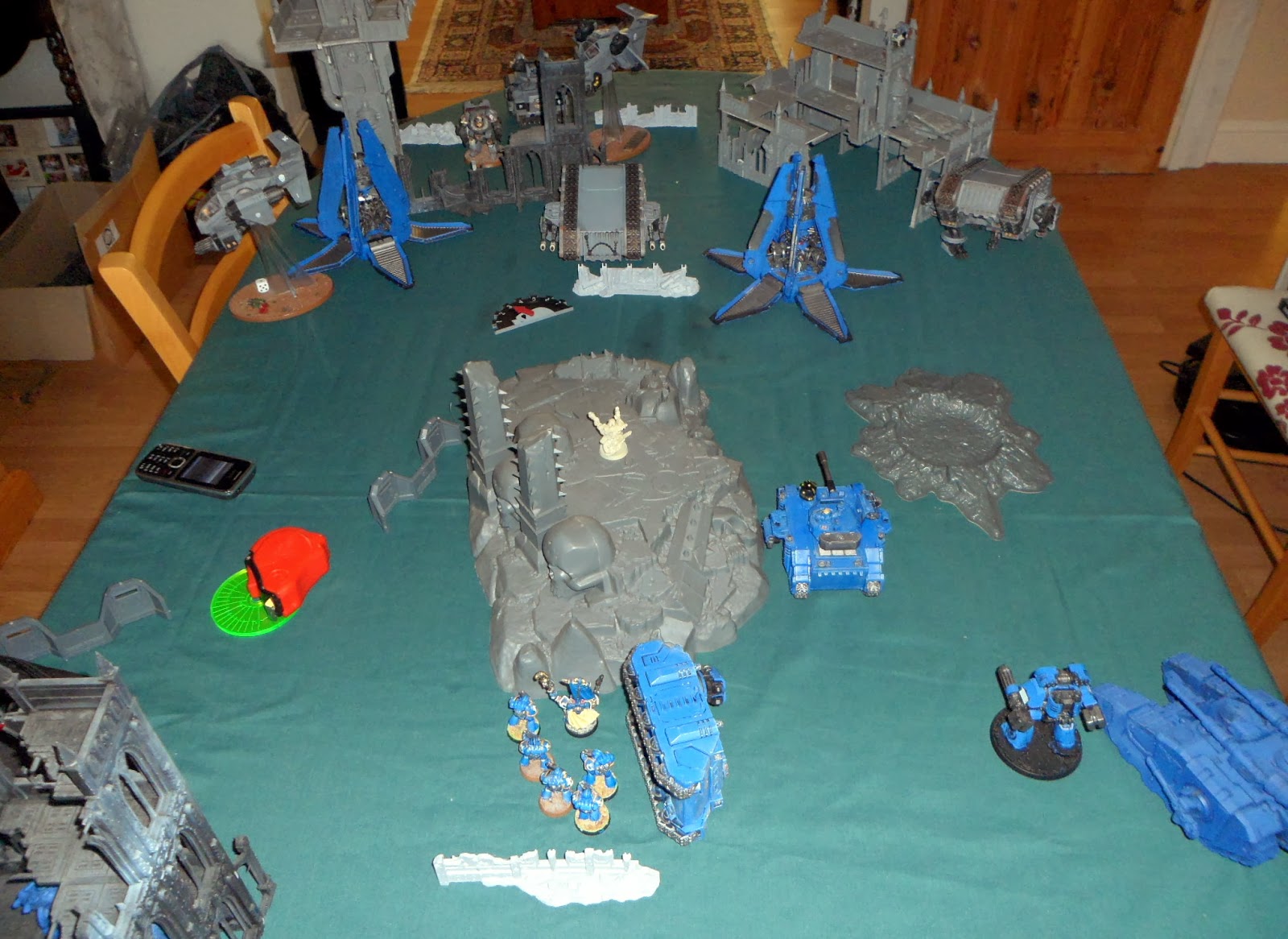 UM Turn 4 - The Contemptor Skyfires it's missiles at the StormTalon in the centre, glancing it stripping a hull point but the flyer remained out of range for the Assault Cannons. The Sicaran opens fire on the Relic Whirlwind in the rear of the Relictor lines, but is saved by the surrounding ruins and wreck of the Landraider. 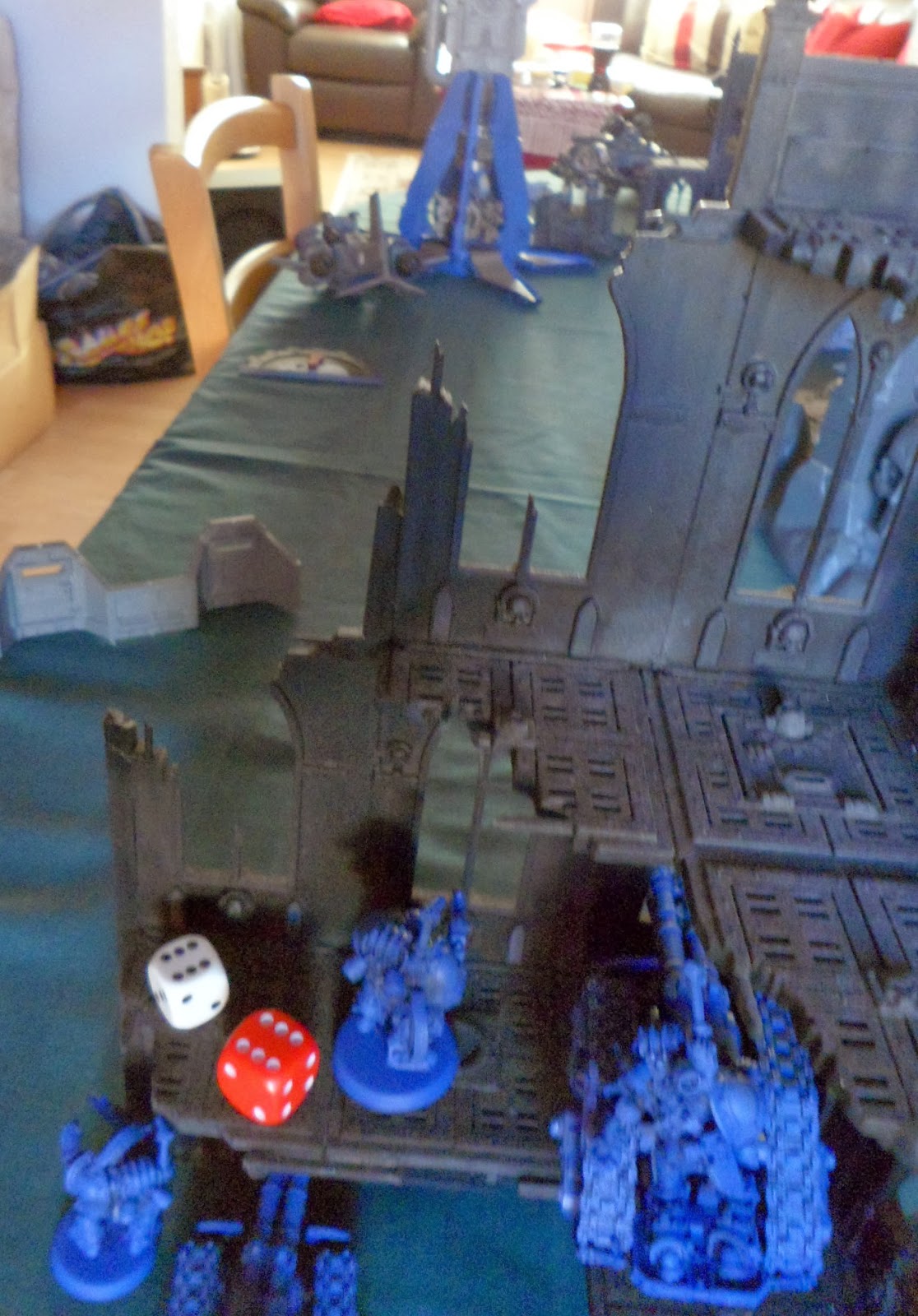 The UM Laser Destroyer Rapiers snap fire at the other Relictor StormTalon, needing sixes to hit, both roll a six and the Laser Destroyers punch through the doomed flyer! UMs now on 9VPs, Relictors remain 10VPs. 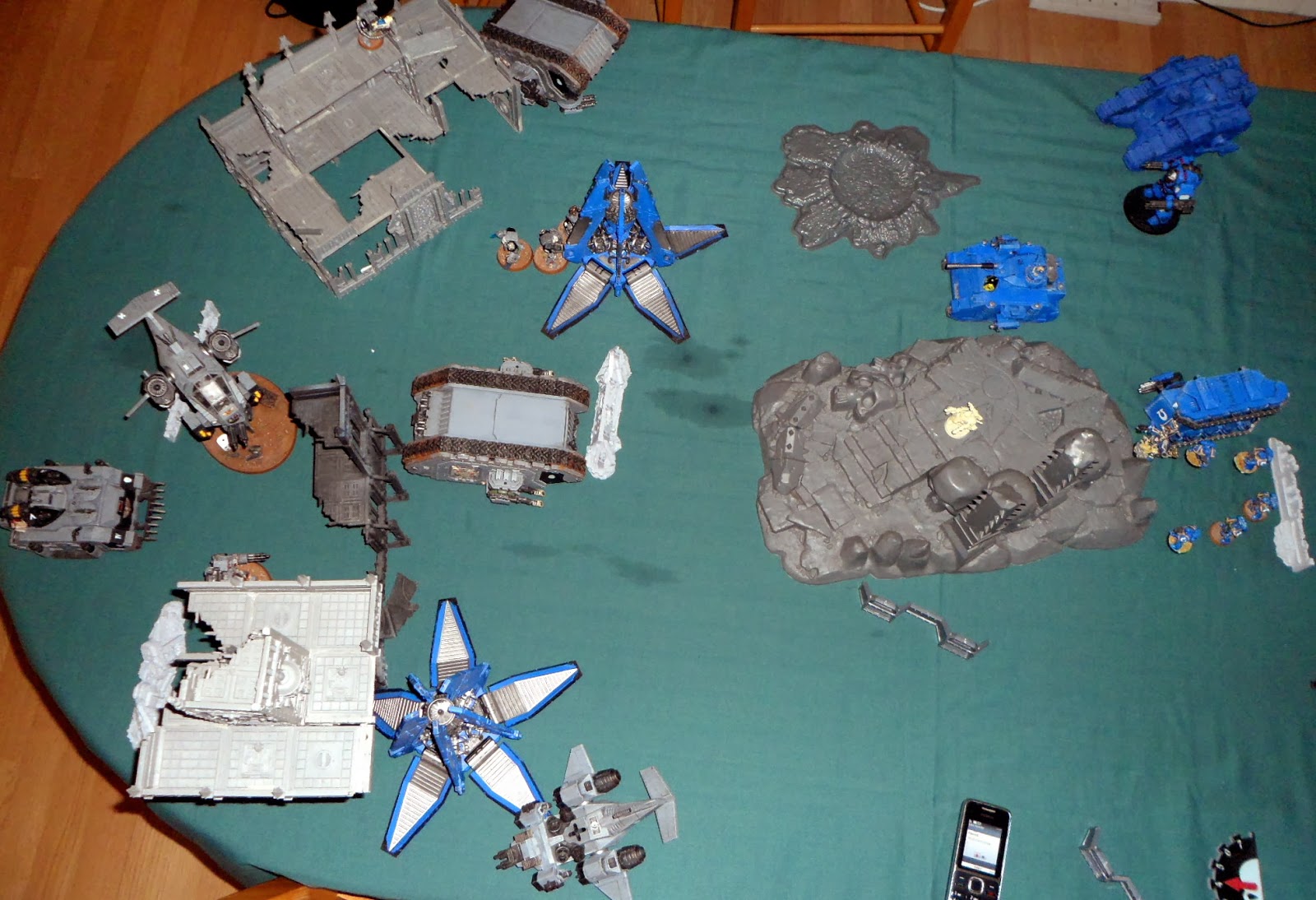 Relictor Turn 4 - The Drop Pod on the left flank is torn apart in a salvo of fire from the Contemptor giving up another VP, the StormTalon zooms off the board to avoid the Turn 5 guns of the Ultramarines. Relictors now 11VPs, UMs remain 9VPs. 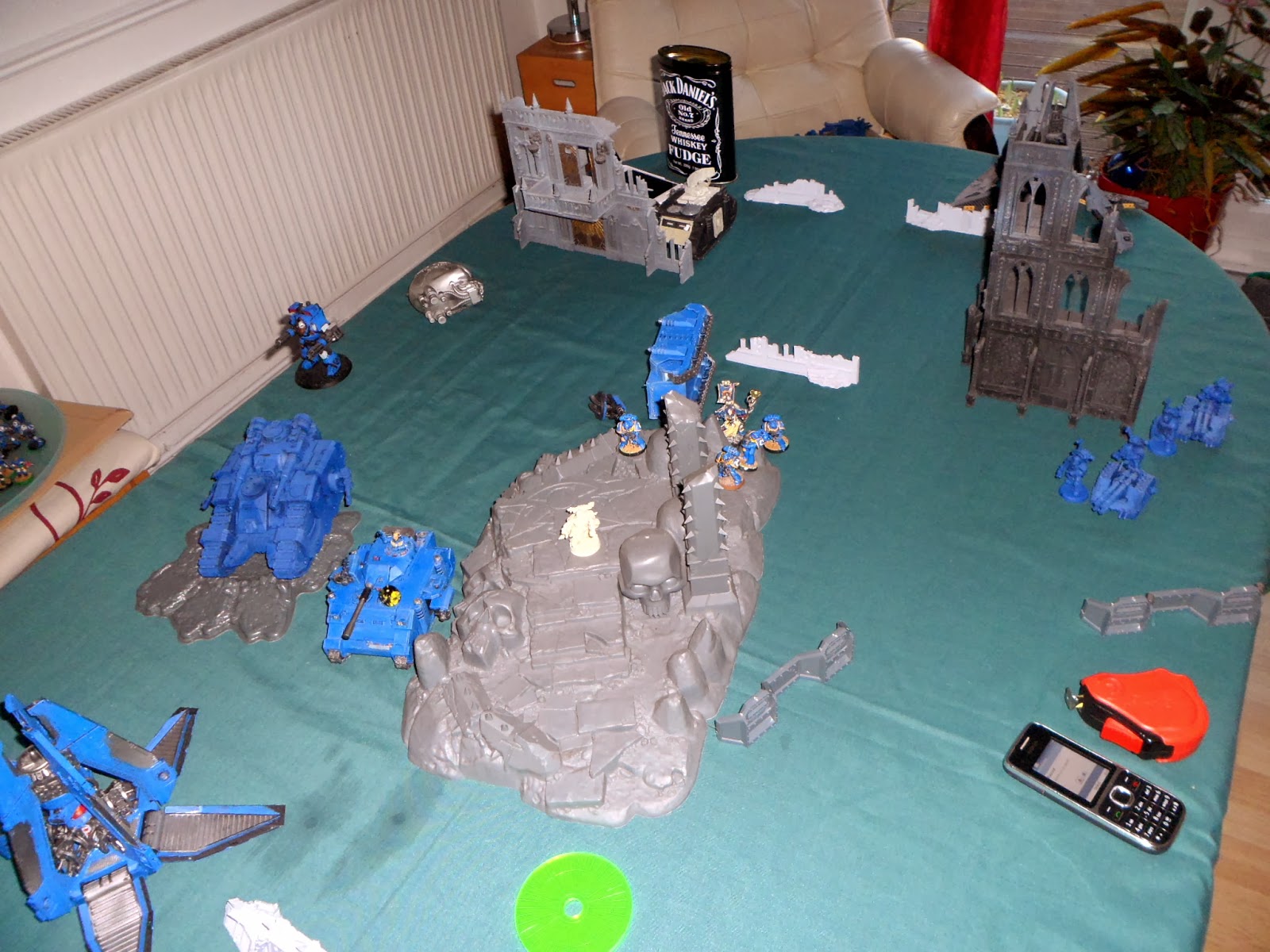 UM Turn 5 - Contemptor and Predator both open fire on the exposed Plasma Cannon Tac Marine, tearing him apart, leaving 3 marines hunkered down behind the building. The Tac Sqd in the centre run toward the Relic in the middle. VPs remain UM 9VPs, Relictors 11VPs. 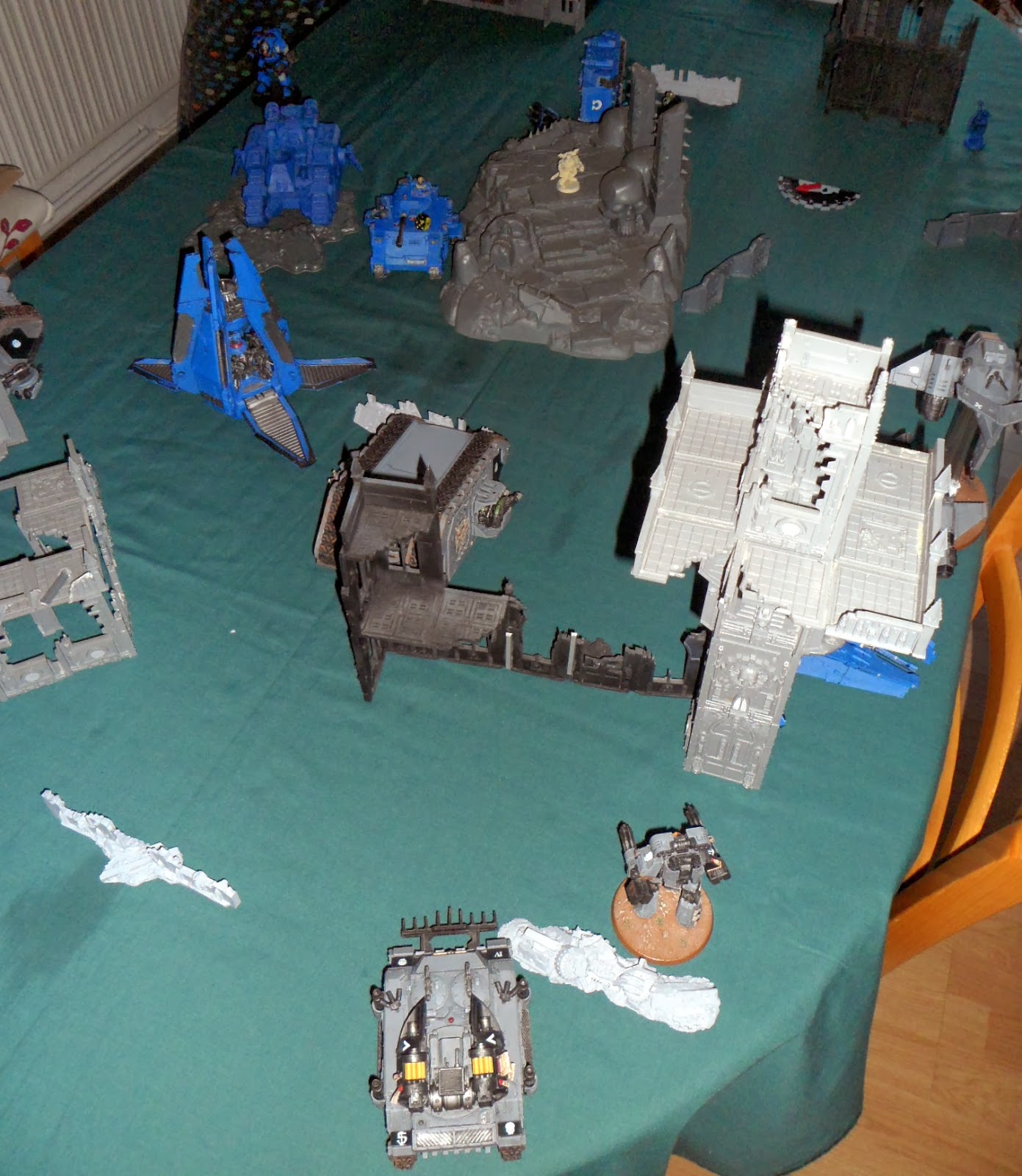 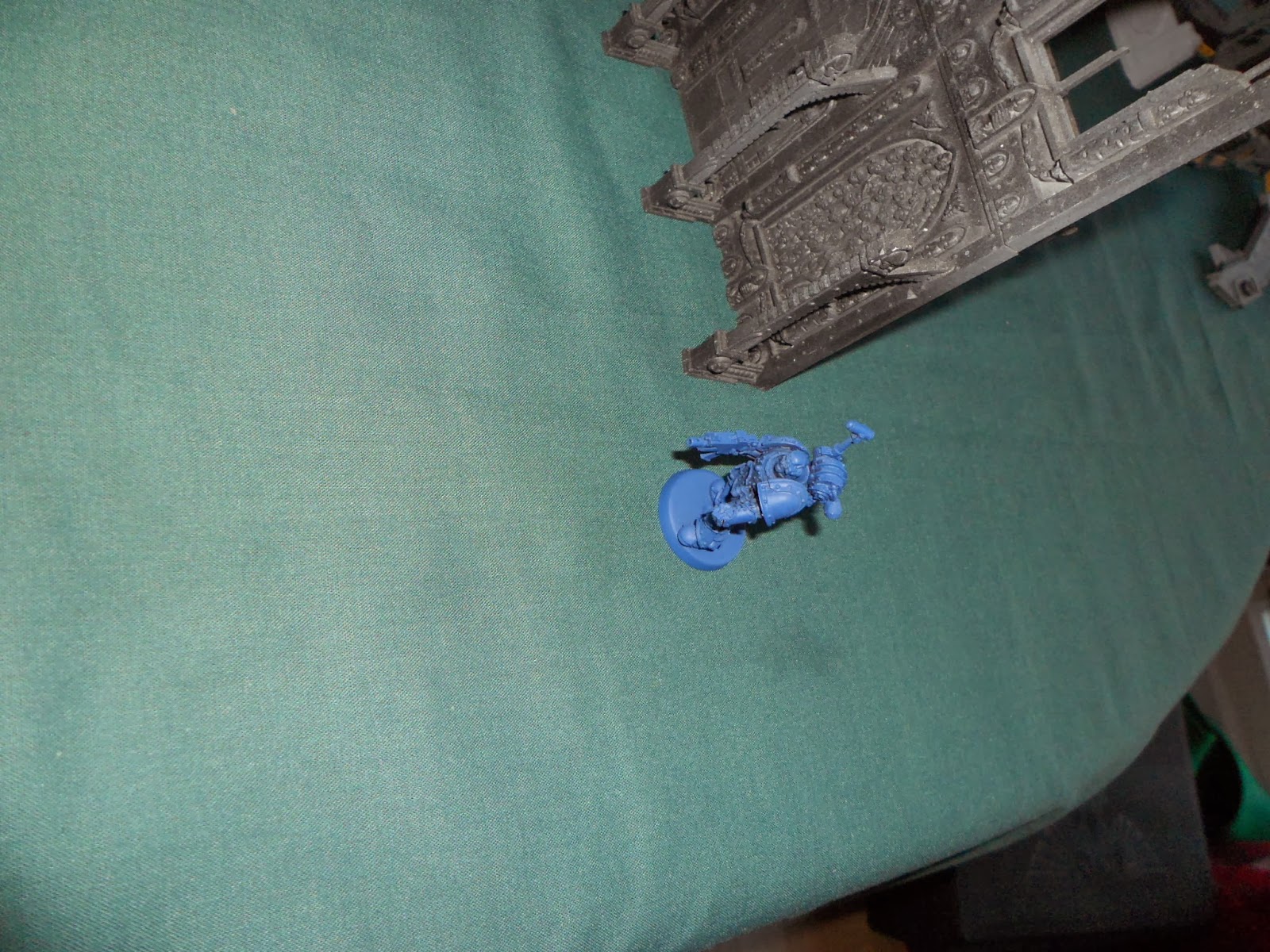 Relictor Turn 5 - The StormTalon returns to strafe the Tac Marines in the centre killing 4, leaving a lone scoring marine in grasp of the Relic if there is a sixth turn? The Scorpius Whirlwind opened up on the now exposed Rapier Laser Battery, killing two guns and three crew, leaving a lone crew member to evade a VP. Mortis Contemptor open fired on the remaining Drop Pod with its ML, but both missed! My remaining Termies and Tac Squad ingloriously hunkered down behind the building in cover to try to deny two easy VPs. We roll for a sixth turn and there is one! Can the dwindling Relictors hold out? VPs remain UM 9VPs, Relictors 11VPs. 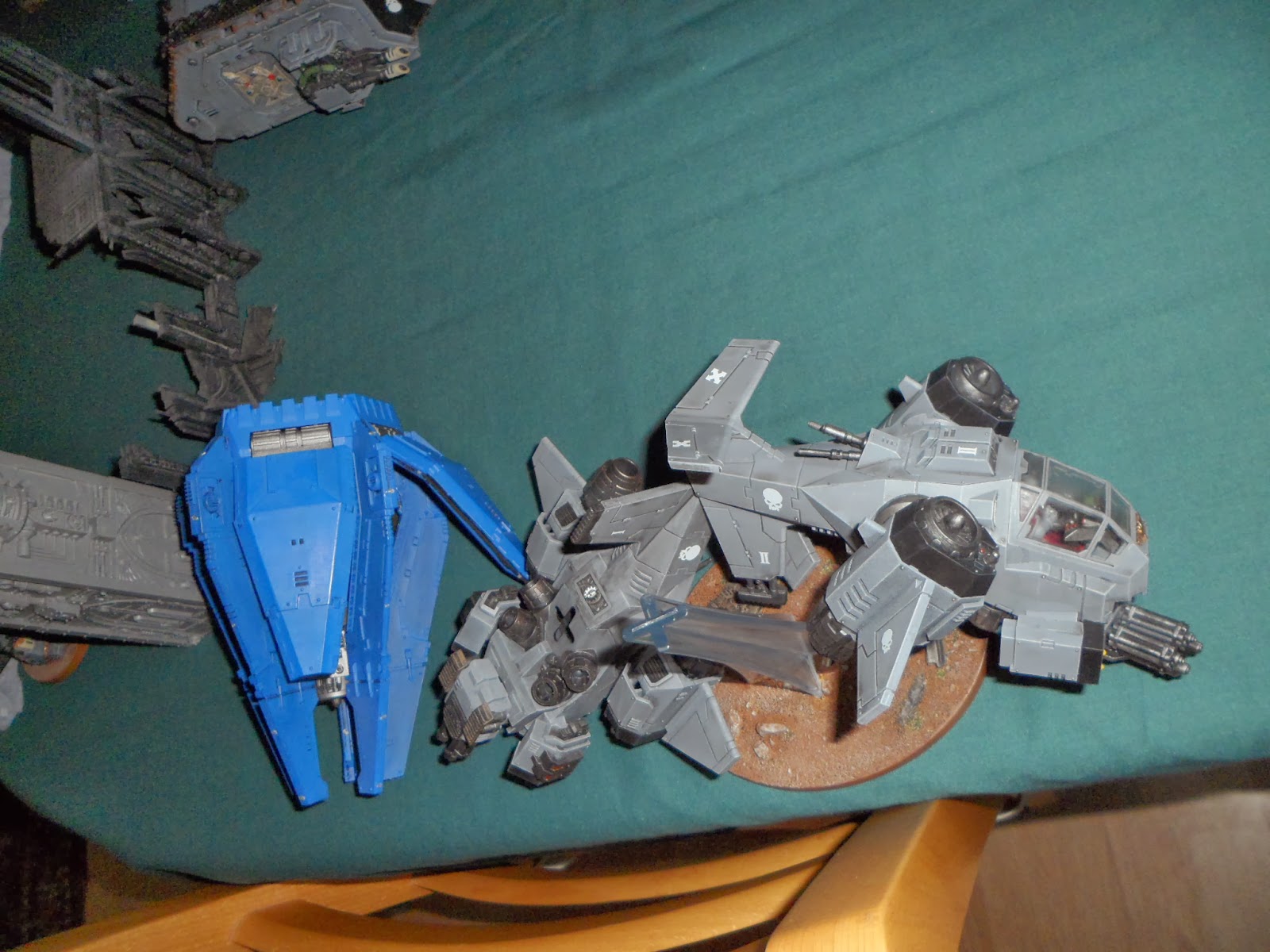 UM Turn 6 - Much to the dismay of the Relictors, the Predator and Mortis Contemptor downs the StormTalon, glancing it to death. The Sicaran opened up on the Relic Whirlwind again, however the thick frontal armour saved it. UMs now 10VPs with the downed StormTalon, Relictors 11VPs. 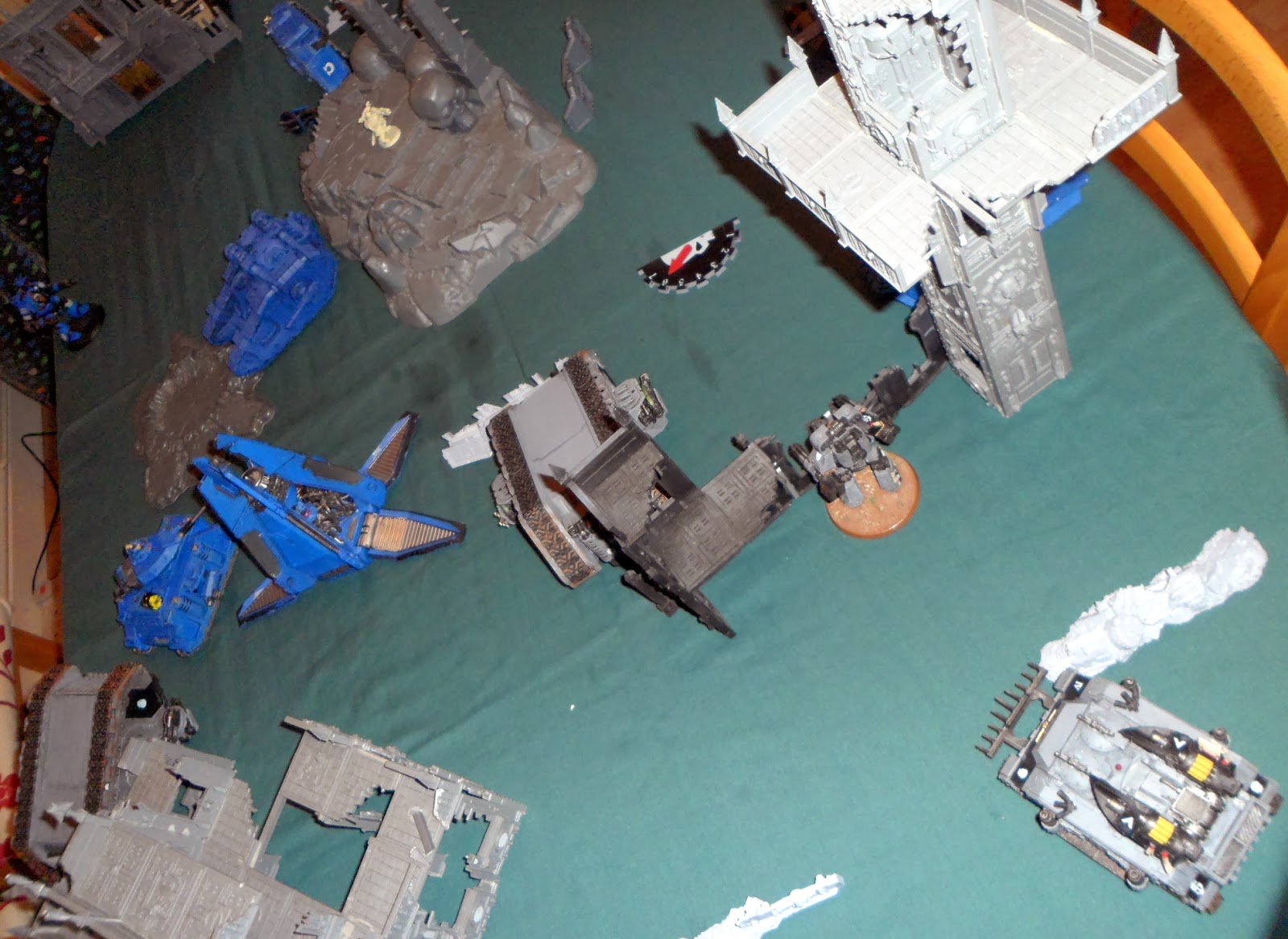 Relictor Turn 6 - The Mortis Contemptor moved up to fire all its guns at the lone Marine on the hill by the relic, 12 Kheres Assault Cannon shots and 2 Krak Missiles fail to take the marine in cover after he goes to ground. However, the Relic Scorpius Whirlwind concentrates its firepower on the same marine tearing him apart in AP3 goodness! Relictors now 12VPs with that Tac Combat Sqd. UMs 10VPs. We roll for a seventh turn but to my relief we don't get one. 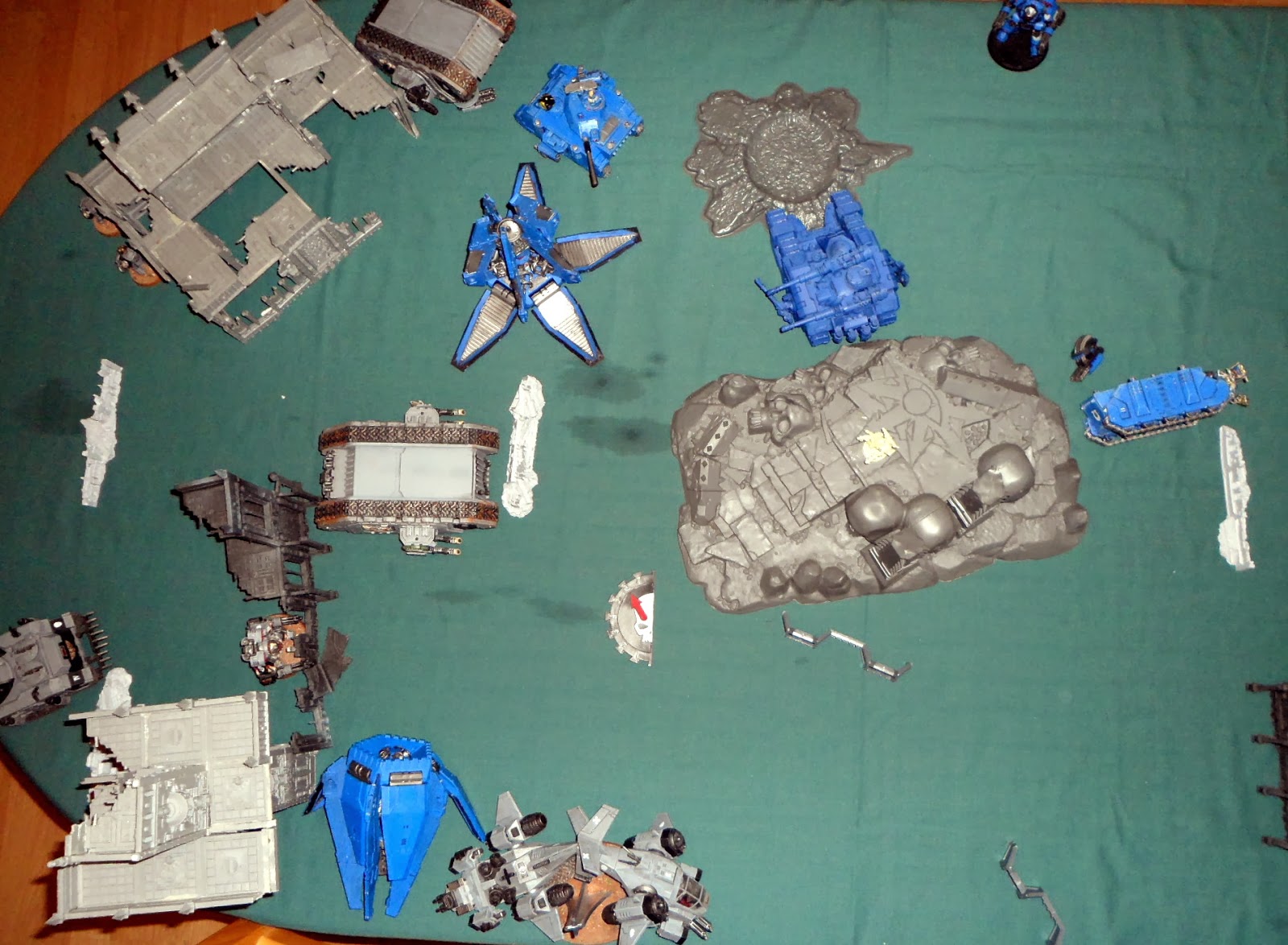 Siph - Well, that was an awesome teeth gnashing, butt clenching battle to the end. Only won by the amount of VPs on hand for the taking. The Relictors played the mission, taking out any UMs that tried to claim the relic and concentrating on taking out the troops when more juicy targets were available, however were out gunned by the UMs from turn two after losing their Landraiders, half the Termies and their Warlord! I plugged away at the UMs taking 12 of the possible 18VPs, meaning Lord H had to wipe me out or gain the Secondary mission VPs of which he took Slay Warlord and First Blood, narrowly missing out on Linebreaker as no denial Units were in my Deployment zone, however 2 vehicles were. I really felt the teeth of the new Sicaran Battletank, those Accelerator Cannons with rate of fire and Rending tore through my Landraider! But my Relic Whirlwind Scorpius fought back with equal tenacity taking out Scouts, Rapiers, Marines and a Razorback, and the final marine grabbing the Relic when the 14-shot Mortis Contemptor failed! We have also looked at the rules for shooting artillery, we should have applied wounds against the guns under the Blast and removed them first, rolling for feedback explosion so I may of gained a lucky result there, however the wreck of the landraider in the centre should also have been removed as it exploded, that would of made me move the Scorpius earlier in game and may have been more exposed to the Sicaran guns later.

Lord H -Indeed, this was a battle of epic proportions- there were laughs, tears and a lot of cursing. (Normally Siph aimed at the dice gods...) After turn 2 I thought I was in a commanding position, having reduced the Relictors army quite considerably with combined Sternguard/Sicaran/Predator/Contemptor fire- however Siph fought back (and hid.. lol) with the talons and Scorpius taking its toll on my force.
My mistake(s) were that I split my Sternguard into combat squads, giving Siph 6 easy VP's for the taking, I hoped that the grav weapons would have popped the land raider then I could have killed the terminators inside with the other grav weapons- in hindsight I should of used the Sicaran/Contemptor to destroy the tank first, then grav'ed the terminators to death as they disembarked.. My other real mistake was giving Siph easy targets, perhaps I should have kept my razorback, scouts, tactical squad and assault marines within my deployment zone, out of the range of the Scorpius- however I went for the relic for the win. It would of been a pretty boring battle if we had both sat back in our respective deployment zones!
Another note is how me and Siph seem to be very much in tune with each other with regards our forces- I had looked at a Dark Angels force lead by Belial with scoring terminators- very similar to the force Siph used..
My unit of the  battle has to be the Sicaran battle tank, it obliterated everything it fired at- and my thoughts are towards having a squad of 3 of them!

Thanks for reading, and i hope you enjoyed our battle report..
Posted by Siph_Horridus